When you study the structure of Gaudí’s Temple and compare it to how Gothic cathedrals work, you can clearly understand the master’s intention of surpassing this style. And he truly did so, eliminating exterior elements, such as buttresses and flying buttresses, which he believed were like crutches.

We sense this same desire to surpass Gothic style when glazier Joan Vila-Grau explains the stained-glass windows he has created for the Basilica, which are so important in creating a transcendent atmosphere and place for reflection and introspection. In short, a temple.

Very often, the most colourful part of a Gothic cathedral is the highest reaches of the stained-glass windows, where there is more unobstructed sunlight outside. In the lower sections, however, where there may be shadows of trees or other buildings, the colour filter is less intense. This distribution often aims to offset one effect with the other, seeking a sort of balance, so that there is less filter where there is less light and vice versa.

At the Sagrada Família, however, it is just the opposite: Gaudí sought out maximum contrast. The most transparent stained-glass windows are those highest up, so that the light can stream in and illuminate the mosaics and golden vaults that characterise the nave. However, the illustrations and texts are in the lower windows, where visitors can see and read them better.

In this regard, we can once again see Gaudí’s drive to surpass the Gothic style. 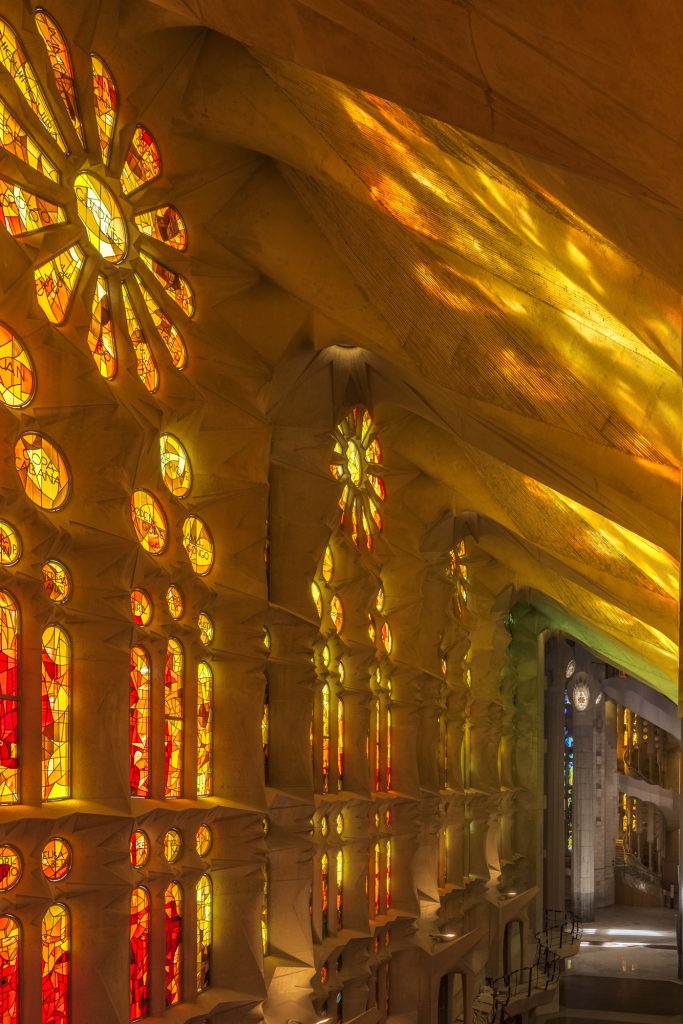 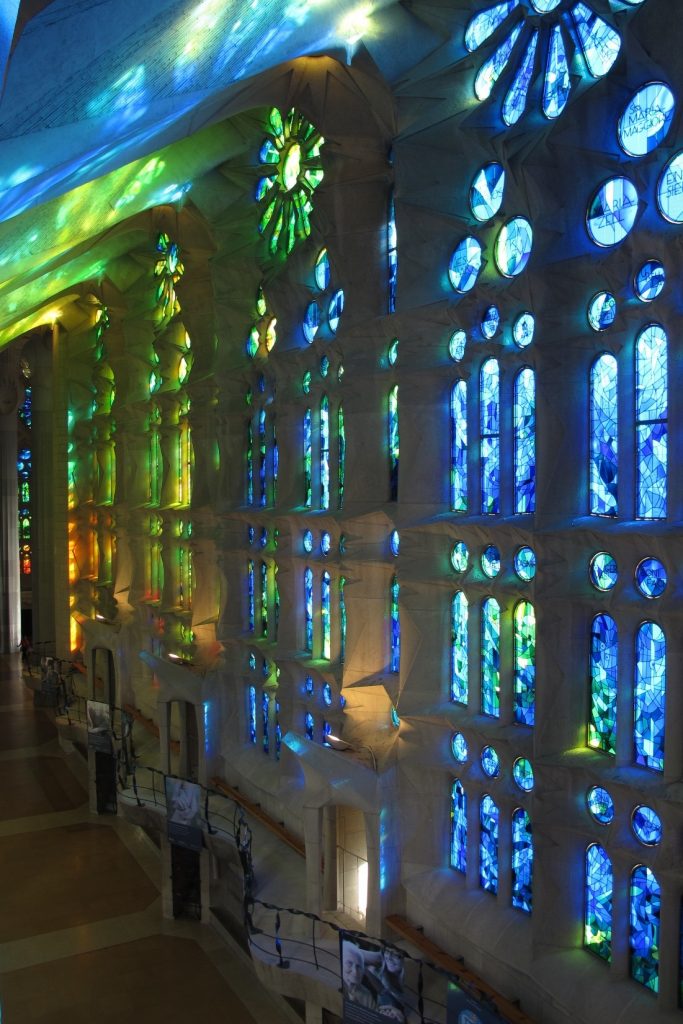 FROM TRICHROMY TO LEADED GLASS

Gaudí worked very hard on the stained-glass windows, as he did on everything he was involved in, and, in this case, the cathedral in Palma de Mallorca acted as a test bench for a truly innovative system: trichromy. This is a composition with four superimposed pieces of glass, one in each of the three primary colours (yellow, cyan and magenta) and a fourth, transparent piece as a seal. By breaking down the colour and transposing the drawing into its component colour layers, he aimed to give the sensation of depth in the drawings, as if they were in three dimensions. The goal, therefore, was for the flat surface of colour to be put together progressively, as colour does as it changes the impact of light on a relief.

Gaudí is believed to have taken the idea from an article published around that time on Tiffany glass, which didn’t go into much detail. Then, he threw himself into researching and testing the idea, but it didn’t turn out as he expected. Nevertheless, there are two stained-glass windows in Mallorca and another at Montserrat made with this system.

The option he chose for the Sagrada Família, however, was leaded glass, backed by more than six-hundred years of experience. The lead lines that divide the window into small pieces allow them to move, expand and contract, as well as making it possible to choose just the right colour for each piece. These lead lines, laid down between the small pieces of glass, become H shaped when pressure is applied so they hold the glass on either side tightly.

The lead, however, doesn’t only help hold the glass in but is also an essential part of the composition, giving it rhythm and dynamism. It is, in fact, the aesthetic and organisational cornerstone of the whole piece. In this regard, it must be noted that a surface with only colour and nothing else would lie flat like a sheet, lifeless. The rhythm that comes from using lead lines, though, makes the window extremely dynamic.

This can be seen clearly in the white windows on the upper levels, which have only transparent glass with different textures. There are sixteen different types of glass: antique, cathedral, printed, houndstooth, ribbed, art nouveau, etc. This way, while in the lower windows the colour of the glass colours the light inside, in the upper windows it is the irregular thickness of the different textures that refracts the white light and breaks it down into the whole range of colours it contains. 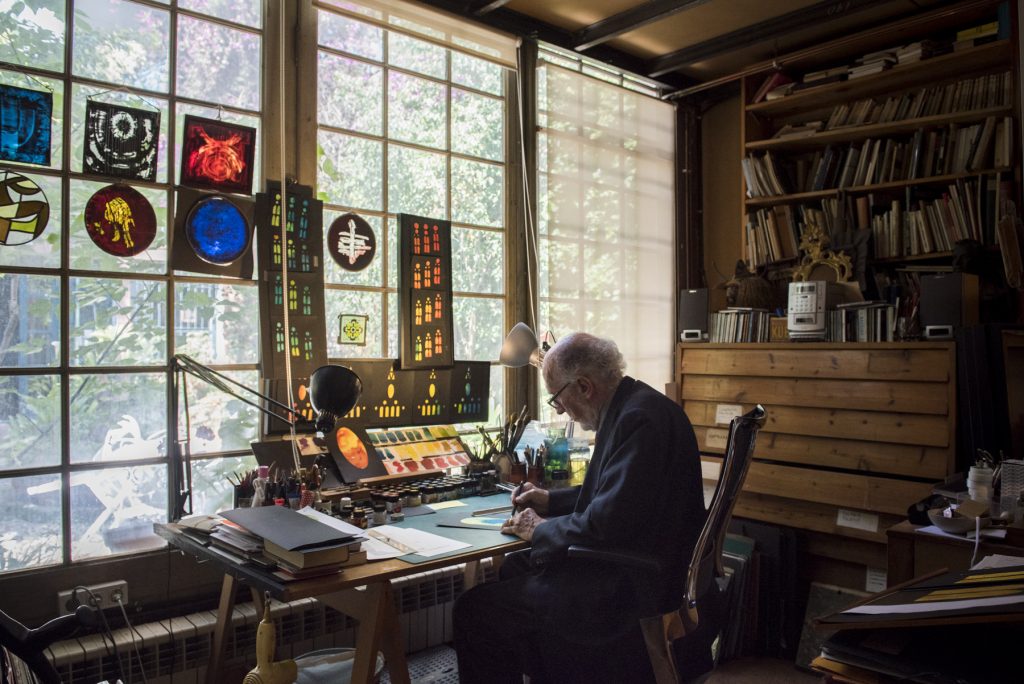 The lead lines also allow Vila-Grau to add the names of the saints and sanctuaries to which each window is dedicated, but his creations are abstract, as he has always shied away from figurative representations. Nevertheless, it is always surprising that people see things and figures in the windows, especially in the central, lightest part of the stained-glass window of the resurrection, which could hint at a white Christ resurrected.

After having worked on stained-glass windows for the neo-Gothic architecture and mouldings on the apse chapels and the Nativity façade, Vila-Grau was very happy to be able to work on those in the nave, immersed in Gaudí’s new architecture. Here the light glides along the hyperbolic surfaces, making the solid structure between the openings seem less heavy. So, it is just as Gaudí wanted when he imagined “the light gliding over the windows like water over pebbles.”

NEAR THE SOLSTICES, A SHOW OF COLOUR

The symphony of colour Gaudí wanted to create can be seen particularly well around the winter solstice, when the sun sets before reaching the west. At sunset, when the rays are practically horizontal, there is an extremely exceptional phenomenon: they stream into the Temple nave almost perpendicular to the windows and, as they are done in warm colours, the nave is inundated with the reds of the sunset. This gives the space an extremely warm feeling, just as a fire gives off heat.

Plus, as the sunbeams are so horizontal and perpendicular to the windows, at sunset each of the rose windows projects its light onto the section of the vault opposite, creating a perfect reflection of each window in coloured light on stone. The effect is truly impressive.

The phenomenon is dynamic and progressive, so the reds are first projected on the floor; then, little by little, they move up the columns, like flames, and continue rising until they reach the vaults, where they end up right on the inclined vaults of the choirs.

This way, the sun rays even make it all the way across the nave, despite the fact that it is sixty metres wide, reaching the cold morning stained-glass windows on the other side, in their blues and greens. The contrast of colours is fascinating and highlights the great work of our talented glazier Joan Vila-Grau. 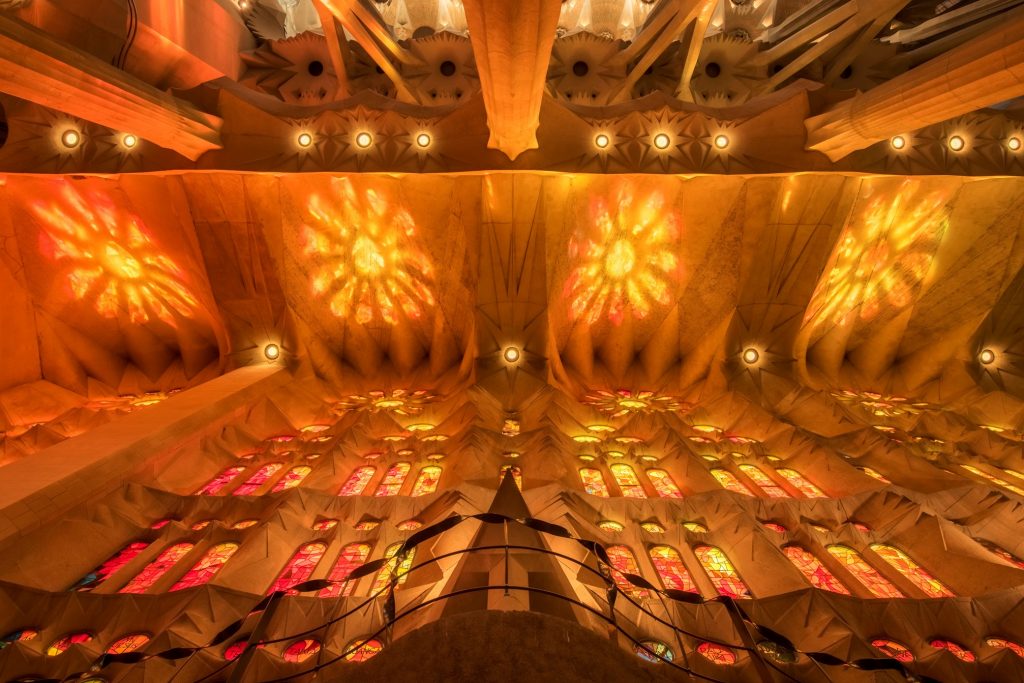 On the Nativity façade side, to see something similar, but with the cold colours in the morning, the greens and blues, you’ll have to wait until the weeks around the summer solstice, in June and early July. The show, in any case, is just as fascinating.