Warning: Use of undefined constant ‘bwp_template_redirect’ - assumed '‘bwp_template_redirect’' (this will throw an Error in a future version of PHP) in /home/customer/www/blog.sagradafamilia.org/public_html/wp-content/themes/blog-sagrada-familia-v2/inc/security.php on line 115
 The stones for the central towers - Blog Sagrada Família
Author: Carles Farràs i Planas.

Stone has been used to build great constructions throughout the history of humanity. The fact that it is both abundant and very strong and durable makes this material perfect for buildings that are meant to last, such as the Sagrada Família.

Today, at the Basilica, the six central towers are being erected simultaneously: dedicated to Jesus Christ, the Virgin Mary and the four evangelists. Each one is made of tensioned stone. This technique, used for the first time at the Temple, allows the construction team to create panels that will ensure the outer skin of the towers can stand up to wind forces and comply with current seismic regulations without having to use reinforced concrete throughout. The big difference between the conventional system used previously, which had a reinforced-concrete structure covered with stone on the inner and outer faces, and the one used today, with tensioned panels, is that the former means the panels can be solid stone throughout. This greatly simplifies the building method because it is no longer necessary to build an inner reinforced-concrete structure and then attach stones with chemical anchors and metal connecting rods.

Another big advantage of this innovative technique is that it makes construction much faster, as a crane can put a whole series of pieces in place in the same operation. In fact, the pieces are assembled in a setting with the same conditions as the site. This operation takes place on flat land at ground level, where it is much easier and safer than at 50 metres above street level.

The tensioning technique used consists in boring holes into the stone pieces and then inserting stainless-steel rods made of Duplex 1.4462, which is highly austenitic and ferritic, with a significant chrome and nickel content that ensures it is much more resistant to rust than conventional carbon steel. The rods are mechanically tensioned using a hydraulic jack and later attached on either side with anchors and nuts to ensure between 15 and 20 pieces are grouped together and tensioned to form a single unit, called a panel.

For this technique to be feasible, each stone piece in a panel must have a specific mechanical strength, which varies depending on the load it must withstand based on its position in the panel. In this regard, there are three types of pieces: A pieces, with a minimum of 70 MPa compression strength and 9 MPa tensile strength; B pieces (55/7) and C pieces (45/7).

This is why, when we started using the tensioning technique in 2015, a test laboratory was set up in the logistics workshop for the Temple in Les Borges Blanques, where the stones that will be used to build the Sagrada Família are stored and pre-processed. The mechanical testing conducted in this laboratory is on top of the standard quality-control inspections that all stone used to build the Basilica undergoes. 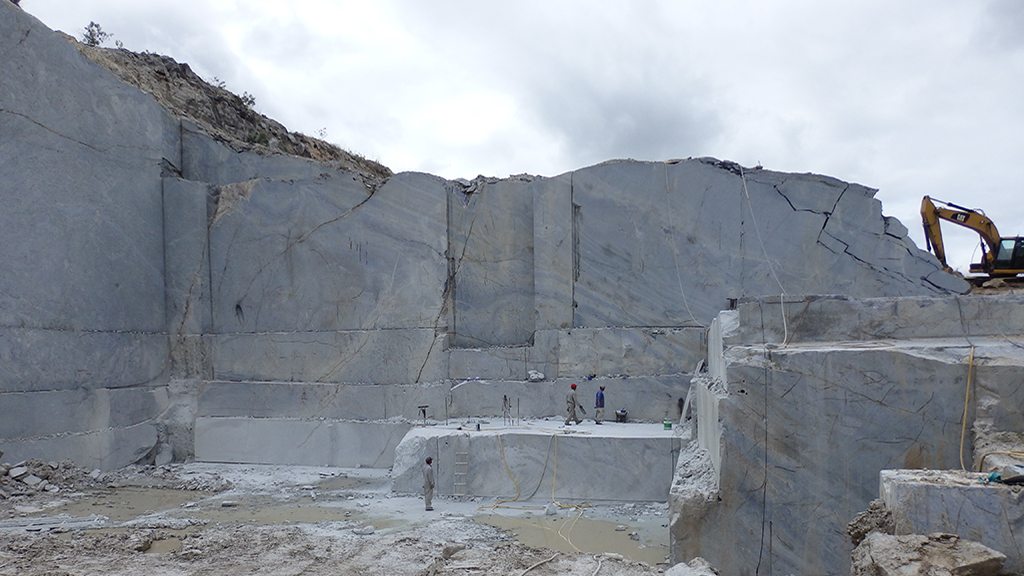 It is worth noting that, to use a specific type of stone on the Temple, it must first be approved. So, new stone undergoes petrological analysis to determine its mineral composition. It is also tested physically to determine its compression and tensile strength, porousness and density; and chemically to expose it to a NaCl saline mist or SO2 atmospheres to ensure its suitability and durability. While the stone is being approved, the quarries it is extracted from are also inspected, analysing their extraction techniques and capacity to ensure regular supply, size and format of the blocks.

1) First inspection: at the quarry

In this regard, the first quality inspection is conducted at the quarry, both at the rock face before the stone is removed and after it has been removed to ensure there are no fissures, changes in tone or other defects.

2) From checking to classifying

After this first inspection, the stone is taken by land or sea, depending on where it comes from, to the logistics warehouse in Les Borges Blanques. Once the blocks reach the warehouse, the inspection at the quarry is verified. If it wasn’t done properly, the blocks are returned or rejected. Afterwards, they are classified by origin (eight different types of stone are being used on the central towers), format and dimensions. The stones are grouped by type and taken to the section of the warehouse set aside for each stone, placing the larger blocks on the bottom and the smaller ones on top. This helps make the most of the storage space available. 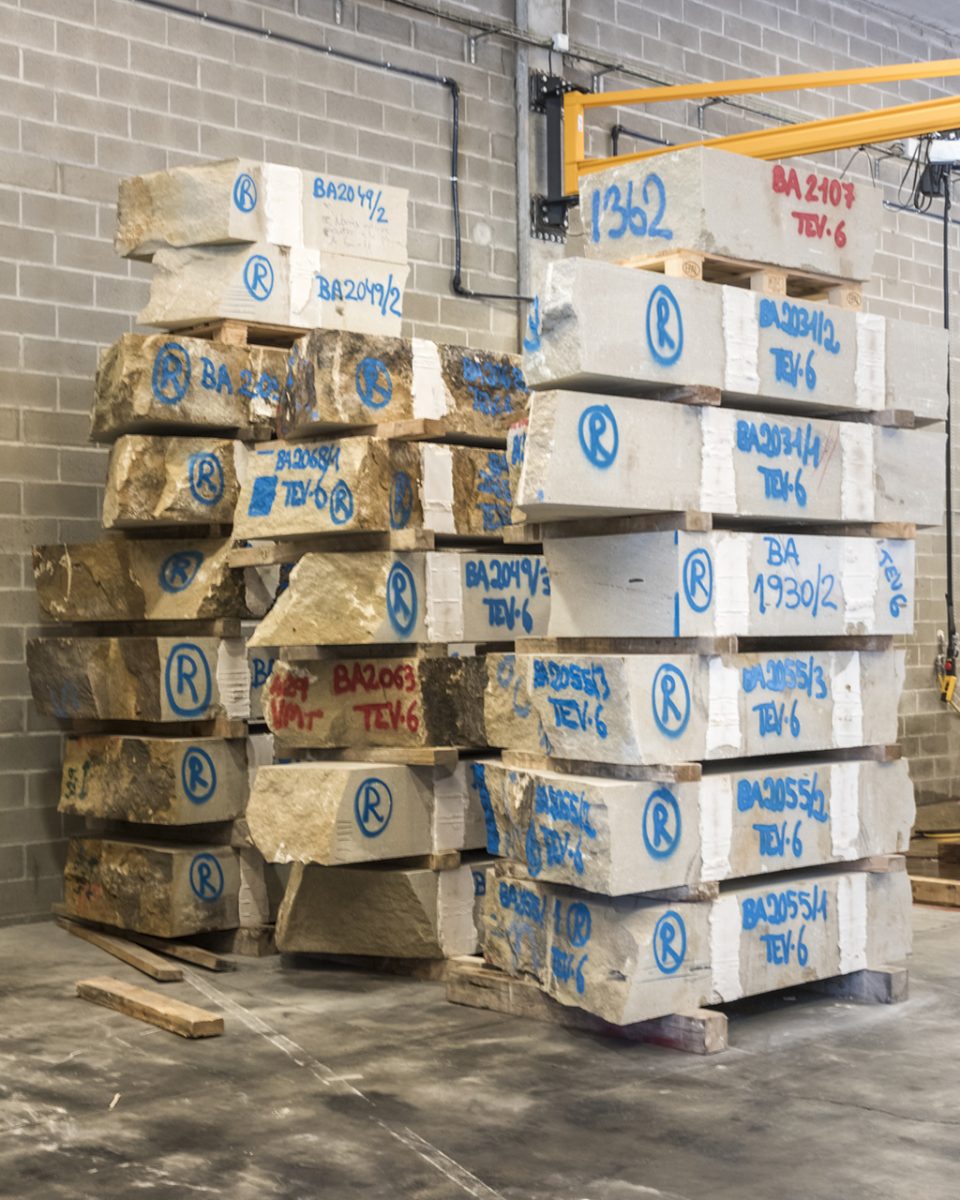 3) The most important control: the strength of the stone

Then, the pre-processing begins to prepare the stone to be used in the industrial workshops that will give the final pieces their shape and texture. This process cuts irregular blocks of stone extracted from the quarries into slabs with flat faces that the workshops can use to create the final shape of the pieces without having to cut them, thus making the most of the blocks. And, it is in this process that quality control becomes even more important. First of all, a test cylinder is extracted from each slab to be used for small cubes and prisms that are compressed in a mechanical press until they break to determine the compression and tensile strength of each slab.

Depending on the results, each slab is assigned the codes of the pieces to be extracted, ensuring they can hold up against the forces they will be subjected to depending on their placement within the panels. In addition to this mechanical inspection, the slabs all undergo a sensory inspection to ensure there aren’t any fissures, discolourations, alterations, etc. With this analysis, we make sure there aren’t any defects in the piece that could cause it to break in the tensing process. This would cause significant delays in the work plan because it would have to be re-done or, even worse, it could be weakened and break once put in place, which would make it much more difficult to repair or replace.

All of these strict quality control processes mean each and every one of the approximately 21,000 pieces that make up the nearly 800 panels on the central towers each have a code.  And no two are the same. This guarantees the stones can be traced throughout the process, from the quarry to their location on site. This unique code that identifies each of the pieces means they can be identified once they have been put in place, with information regarding the workshop that produced it, which slab it was cut from, its compression and tensile strength, and which block and quarry it came from.

4) Another inspection before production

At the industrial workshops, which give the pieces their final shape and texture, they undergo a fourth inspection. On the one hand, this looks at the shape of the piece to ensure its geometry is correct, essential to make sure they will all fit together, as well as the structure of the anchors and stainless-steel tendons that will bind them into panels. On the other, this inspection also checks for any hidden defects the slabs may have, revealed when the surrounding stone was removed to give it its final shape. These can include colour changes or unexpected tones that affect the overall look, which is something we look at closely throughout the stone selection and control process. 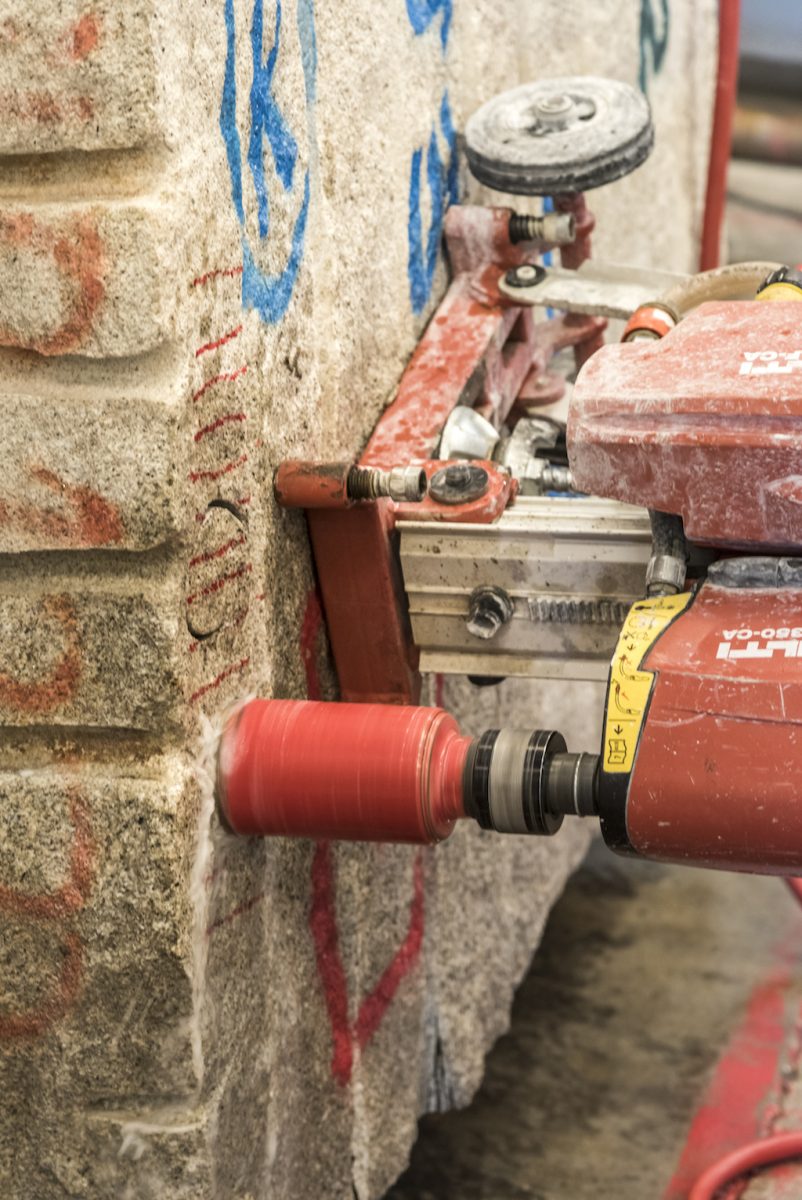 5) Verification at the warehouse in Galera…

From here, however, there are still two more inspections: one when the finished pieces reach the warehouse, to ensure they haven’t been damaged in transport by being placed on the pallets improperly or not having enough protective packing. This type of incidents, however, are very rare as the pieces are treated with great care. After this inspection, we begin the pre-assembly and tensioning of the stones.

6) … and then the final inspection

The sixth and final inspection takes place when the stone pieces have been tensioned and have been subjected to mechanical forces before putting them into panels. They are inspected to make sure that there aren’t any fissures or weak points that could deteriorate or break once the panels are put in place.

These quality-control inspections, which take place throughout the extraction, mechanisation and pre-assembly process, are performed on each and every one of the pieces for the central towers to ensure the durability of all the 21,000 stones used in construction. It is doubtful that any other construction site in the world today has as rigorous a quality-control system as the one used at the Basilica of the Sagrada Família, making it, in this sense as well, a truly exceptional work. 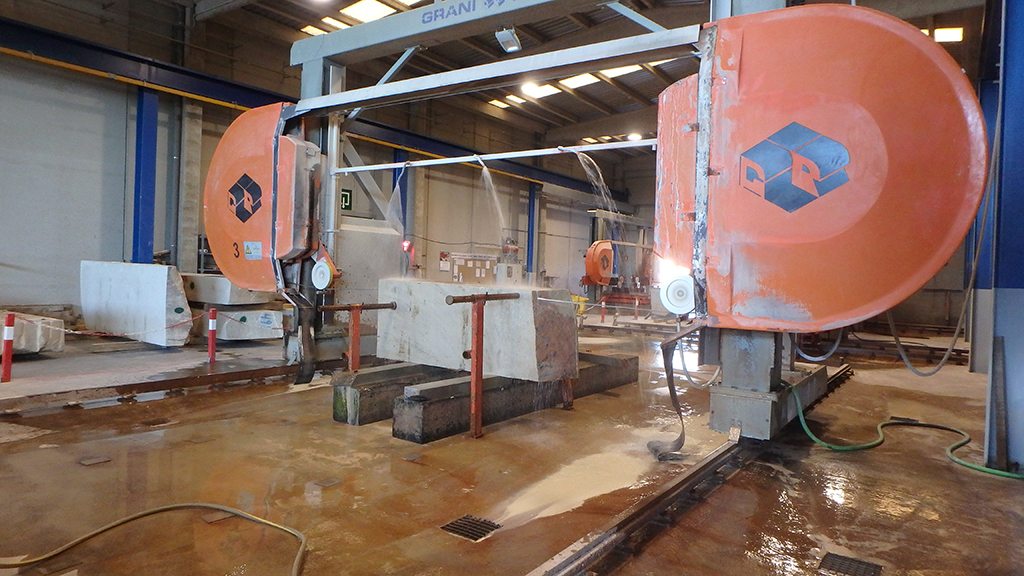 Carles Farràs i Planas
Degree in Architectural Technology and Master in Appraisals and Assessments from the Polytechnic University of Catalonia. Head of the Sagrada Família Production Department. He has also worked at other development companies and is an independent contractor.

At the Basilica, his work currently focuses on planning and coordinating production of the central towers.