The structural skeleton of the six central towers of the Sagrada Família is made up of a grid of lines, both horizontal and vertical. The vertical lines fall right where, on the outside, you see the arrises in Brazil blue granite on the tower of Mary and in red granite porphyry on the rest of the lanterns. They are made up of a combined structure of steel and concrete, both high-performance. For the steel, we use duplex stainless steel, which is more resistant than conventional steel, and the concrete that envelops and protects it is also much more compact and resistant than that commonly used in civil works. This way, we can ensure that this structural whole will be exceptionally durable.

The horizontal lines form a sort of belt around each level, which you can see if you look at the separation between each set of three windows and which is extremely important for making the whole tower rigid.

In this case, there wasn’t room to use concrete and the tensioned stone was chosen as the trusted solution to meet the structural requirements. So, the tensioned-stone panels not only make construction easier, as they can be pre-fabricated and stockpiled, they are also a significant part of the distribution of the overall structural calculation. Stone, therefore, still plays a structural role at the Sagrada Família today.

FROM ENCLOSING THE TOWERS TO A STARRING ROLE IN THE STRUCTURE

The stone panels, in fact, could have been conceived simply as an enclosure, secondary in terms of structure, only used to transfer the forces towards the perimeter, meaning the main structure. However, in reality, the stone has been conceived to work with the main structure: the panels help transfer the forces towards the base and the foundations and, on the upper row, include horizontal tendons that act as the horizontal structural ties of the tower.

In addition to gravitational loads, the wind loads are very important to keep in mind with buildings like this one, which are very tall, as we discussed in a previous article, and in this regard the tensioned-stone panels also play an important structural role. Moreover, in our case, the wind forces are accentuated as the towers are not uniform, as the triangular windows have glass to keep rain from coming in.

When a solid stone or cut-stone masonry building warps due to the force of the wind, horizontal joints between the stones deform and can open up. At the same time, of the whole thickness of the wall, only the non-fissured part, where there’s contact between the bricks, would be working. This is why the Gothic system had very thick walls, although in practice only part of them were working. At the Temple, where the light, tree-like structure has already been built below the vaults where the towers begin, thick walls would be too heavy. The resource of tensioned-stone panels has made it possible to reduce this thickness to a reasonable value and a possible weight while also optimising the whole thickness of the wall, as the tensioned cables press the pieces of stone together and make sure they won’t separate under any circumstances. The whole thickness is always working.

In terms of the structure, the most unique thing, then, is the tensioning of these stone panels. In order to tension the stone, we need several elements. Let’s look at the main ones: 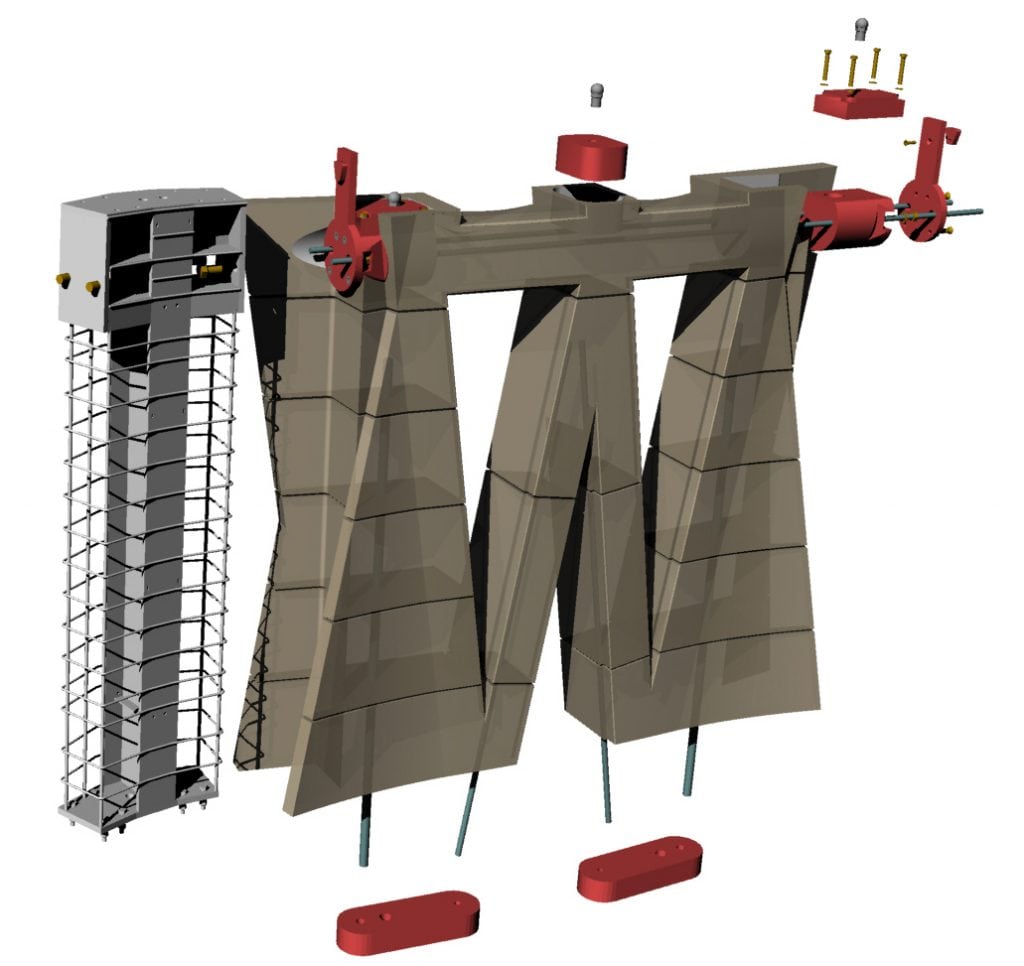 Although we often speak of tensioning cables, in our case they are really rigid bars of varying diameters, depending on the situation, with threads on the ends to attach the anchors, which go inside the stone. For them to be able to go through up to 11 layers of stone, all of the pieces have to have holes that are perfectly aligned so the tendon, when it passes through, doesn’t run into any misaligned openings.

The holes in the panels go in both directions: horizontal and vertical. The points where they cross are the most critical and require the most attention because, in order to ensure they are effective, all of the bars must be as centred as possible with regard to the thickness of the stone. That’s why there are never more than three bars at the intersections: for the smaller panels, there are two horizontal bars and one vertical bar; on the large panels, for the tower of Jesus Christ, it is just the opposite, two vertical and one horizontal.

All of this means that the stone must be thick enough so that the holes can cross at this critical point without touching, leaving enough safety margin. 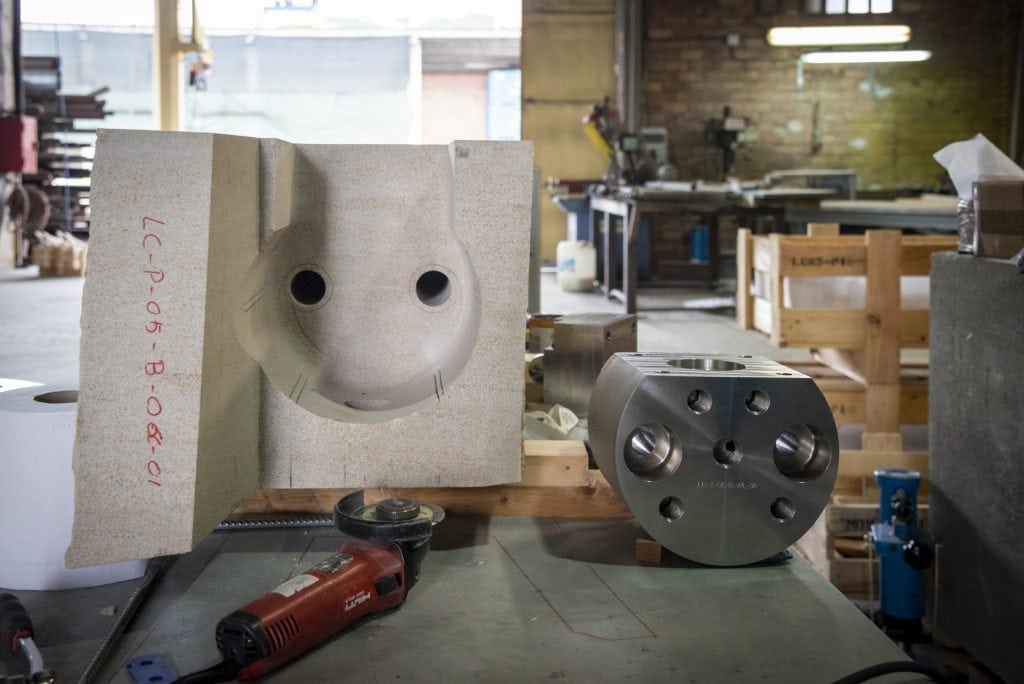 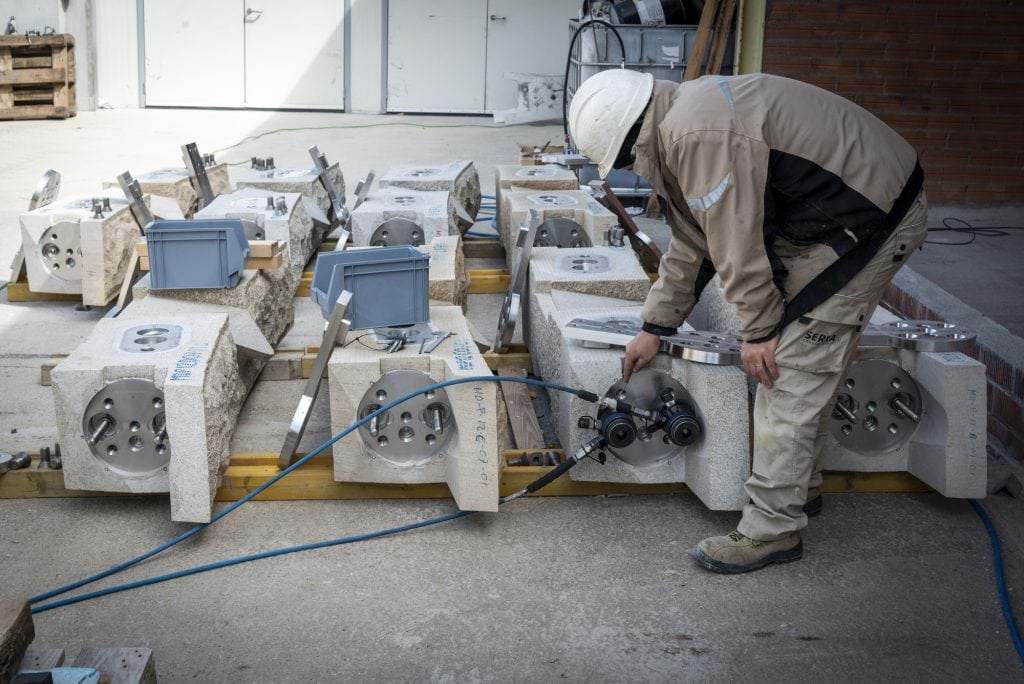 The anchors are the solid duplex stainless steel blocks that the tensioning bars go into. They are on the first and last row of each panel, and the hole needed for the anchor in these highly resistant stones must be cut with millimetric precision. The anchors and the stone are bound with very special resins.

The smaller panels, those for the towers of the Evangelists or the Virgin Mary, have three anchors on the bottom and two on top when the stone panels are M-shaped, or the opposite when they are W-shaped. However, the panels for the tower of Jesus Christ have eight anchors in total: the M-shaped panels have three on top, as one is needed in the centre to absorb the greater curve of these panels, and on the bottom there are five; the same is true of the W-shaped panels, but in the opposite order.

In order to make sure that each panel fits together exactly with the panel below it, they have metal elements, like a ball joint, sticking out of the anchor below that fit into the hole in the anchor on the panel above. These elements are called tenons, a term taken from the traditional mortise and tenon system used in construction and woodworking.

The tenons serve to centre the pieces and are very useful for getting the panel in the right position when bringing it down with the crane. This manoeuvre, often repeated at the Temple, is very delicate and we even postpone it when it is too windy because of the risk of this panel hanging in the air starting to swing like a pendulum or twisting.

Additionally, although the tenons are of great help in positioning the piece, they can also be a problem when trying to fit the mortise and tenons in more than one point. In fact, the panels on the towers of the Evangelists and the Virgin Mary were done with two and three tenons on every level, alternately, while the panels on the tower of Jesus Christ, which are much larger, only have one and two, alternately, to make them easier to fit together. We must remember that the bigger and heavier a panel is, the more difficult it is to move and it is very helpful to have tools facilitating this manoeuvre while also ensuring proper positioning. 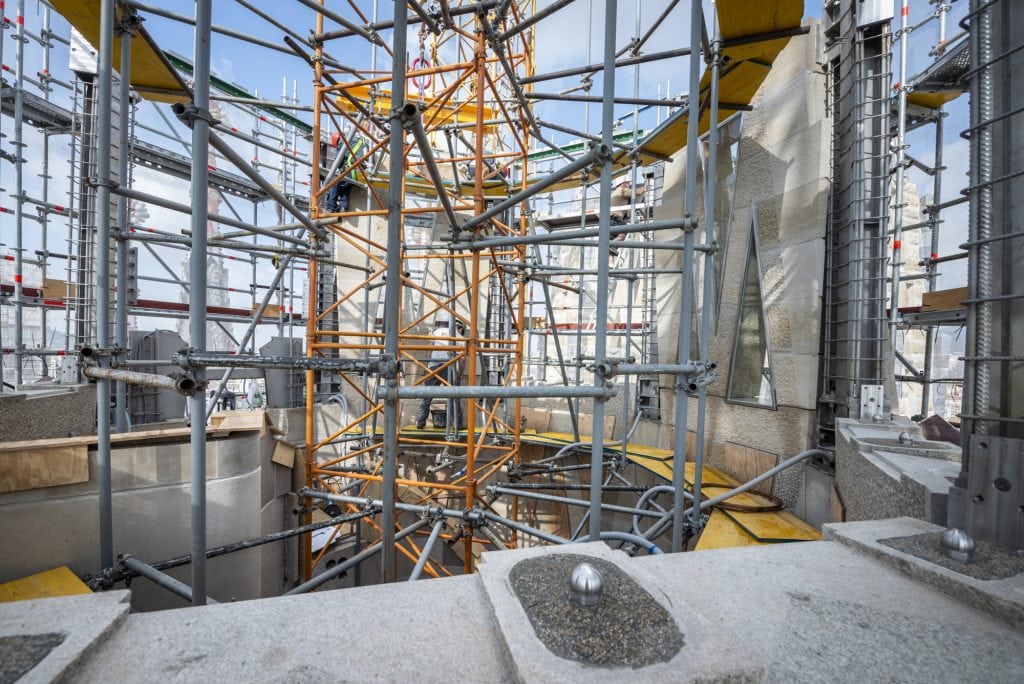 This term refers to the elements that stick out on the upper end of each side of the panel so the crane can lift it and, then, fit it into the openings in the columns on the main structure for this purpose. They are, to give simile, like clothes hangers. Thanks to these elements, the panels go from hanging from the crane to hanging from the structure, where they are immobilised.

When a panel is being lowered into place by the crane, it has to pass between two columns of the main structure, put together previously. The panel has to be lowered until both the tenons and the hangers snap into place. For the pieces not to rub, a minimum tolerance of 8 mm on either side is required. This minimum tolerance is always necessary, as there may be tiny deviations on the site so that, for example, there are 4 mm on one side and 12 mm on the other.

The term shimming comes directly from the English term shimming plate, which refers to the steel sheets, of different sizes, used to fill any space that may be left between the hangers of the top anchors and the columns on the main structure. So, the shimmings ensure that the tolerance gap is filled for total contact, which is needed in order to tension the horizontal cables that cross the boundary between the pieces, closing each level of the towers into circular rings. 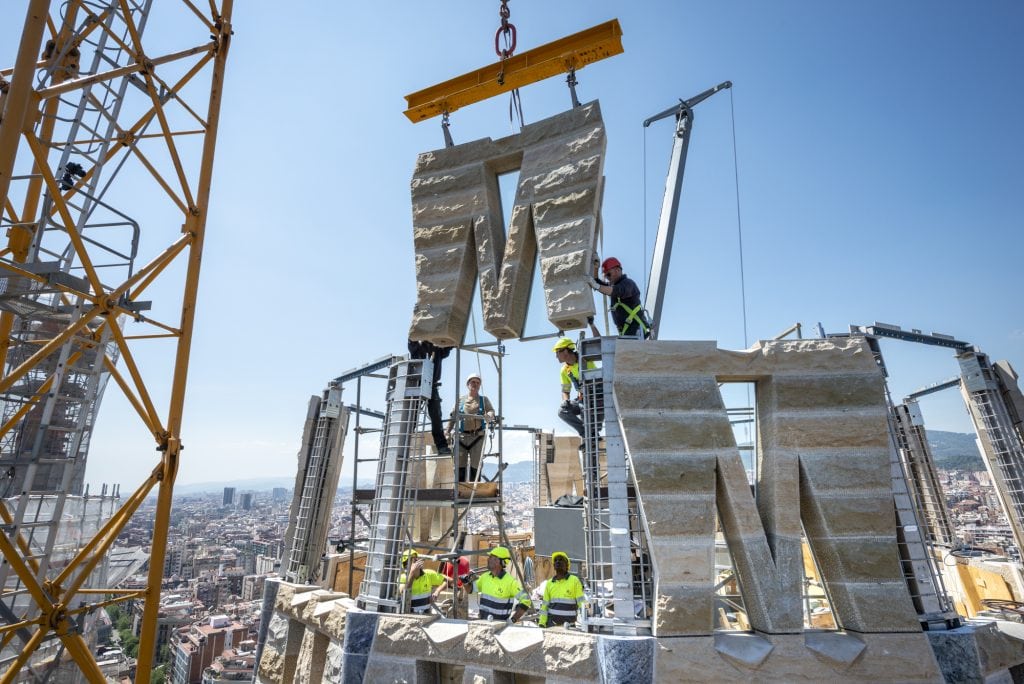 All of these elements are part of the tensioned-stone panels we are using to build the central towers. They are, as we’ve seen, a network of steel pieces that make up the structural skeleton and, although in many cases they can’t be seen, they also play a role in the construction of the Sagrada Família.


Jaume Serrallonga
PhD in Architecture from the Polytechnic University of Catalonia with thesis entitled Geometry and mechanics in Gaudí's models. Member of the Sagrada Família Project Department. He has also taught at several universities.
At the Basilica, he has been in charge of the projects for the apse vaults and Passion sacristy, among others. After working on the great hyperboloid for the tower of the Virgin Mary, he is currently working on the project for the Glory façade.