Just like patients are monitored at a hospital, tracking their vital signs to detect any anomalies and raise the alarm, it is also becoming commonplace in the world of architecture and heritage to monitor important buildings or heritage sites. In these cases, it is important to get enough data to ensure that any issues are detected early enough that they can be resolved.

This is the case, for example, with cracks. Before, we used crack patches, which are a sort of rectangular plaster patch placed over the crack being studied. When the plaster dries, it gets very hard and if there is any movement, the patch breaks, warning architects that the crack is still active and growing. This system, however, didn’t provide any idea of how much movement there was. Later, to assess the change in width of a crack, which gives some idea of the depth as well, slide callipers were used. This tool measures the distance between two nails, one on either side of the crack. More recently, manually calibrated rulers began to be used. These instruments would later evolve into crack monitors, devices that provide much more precise information on a crack. The Sagrada Família, which has had cracks since Gaudí’s time, has also followed this evolution in systems to monitor its movements. In this article, we’ll reveal some of the technical details involved. 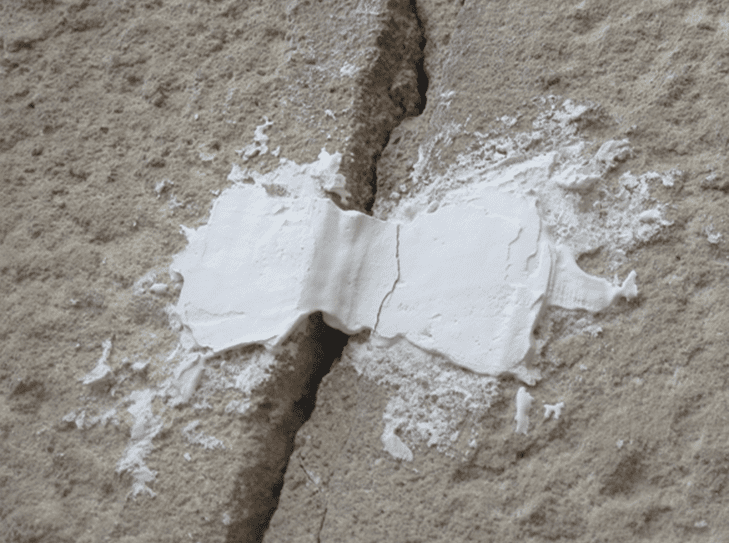 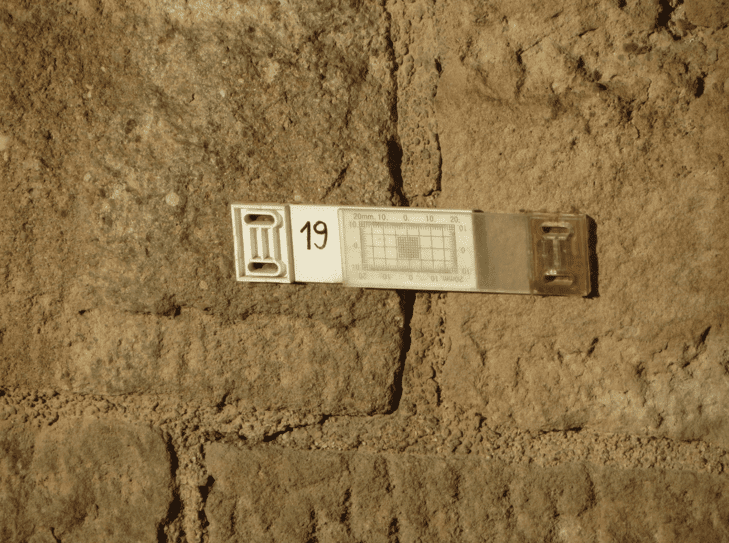 Initially, to get the data from each of the different devices installed on the building we had to take each reading individually. The relationship between them and the conclusions that could be extracted was a task done later by specialised experts. In 2010, however, as a result of the works on the high-speed train tunnel under Carrer Mallorca, a comprehensive system to monitor the building’s movement was installed at the Temple, although in this case it focused mainly on the Glory façade.

The system included new elements like a full topographic station, which measured the movement of the structure, and inclinometers, highly precise devices that measure the vertical offset of the façade caused by ground movement. Piezometers were also installed. These devices are put in a very narrow, very deep hole to measure the level of groundwater.

After the tunnel was completed, the riskiest phase of the construction works, the train running underneath the Basilica wasn’t a hazard. Temple technicians, however, wanted to continue compiling data and began a second campaign to install instruments in other areas. In addition to the devices already used, extensometers were also installed to detect deformations.

In both cases, though, it was difficult for Temple technicians to access the data. They had to request the information well in advance and the corresponding companies also needed time to issue their reports. As they wanted to be able to monitor the situation in real time and have information on any movements at any given time, it was decided that our technicians would begin monitoring the Temple themselves.

The initial intention of compiling data through ongoing processes was to use it to come up with an appropriate plan to fully restore the Nativity façade in the future. However, it soon became clear that it was a good idea to monitor the whole Temple, not only the façade that is listed as a World Heritage Site, as it would also be required for the imminent construction of the central towers. 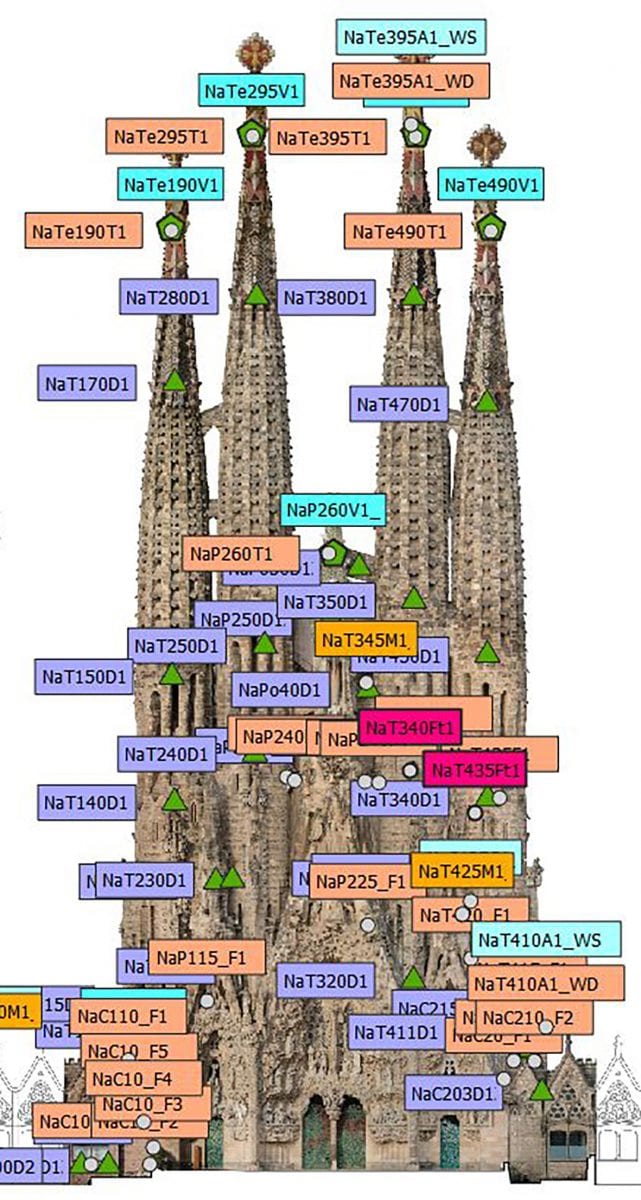 Today, however, there is a powerful system that monitors the whole Temple from all standpoints. To achieve this, agreements were reached with several home-owners’ associations in neighbouring buildings to install the devices needed to compile this data on their rooftops. In most cases, they are small elements called prisms, which are points of reference that the system uses to take measurements. They are small reflectors, don’t take up any space and hardly affect the building at all. 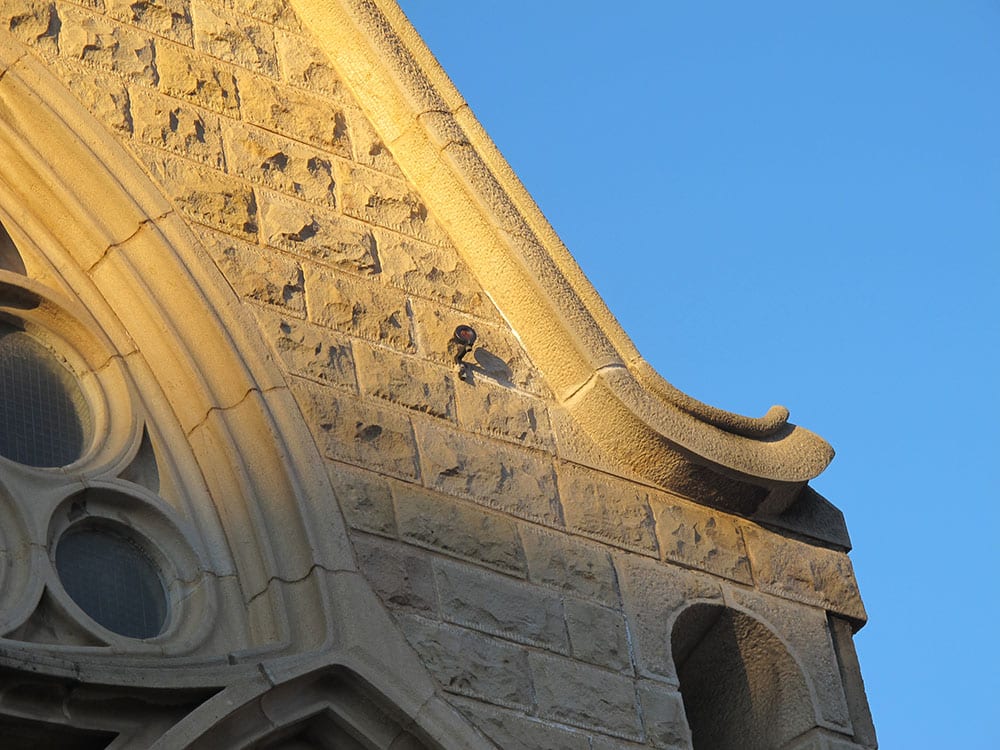 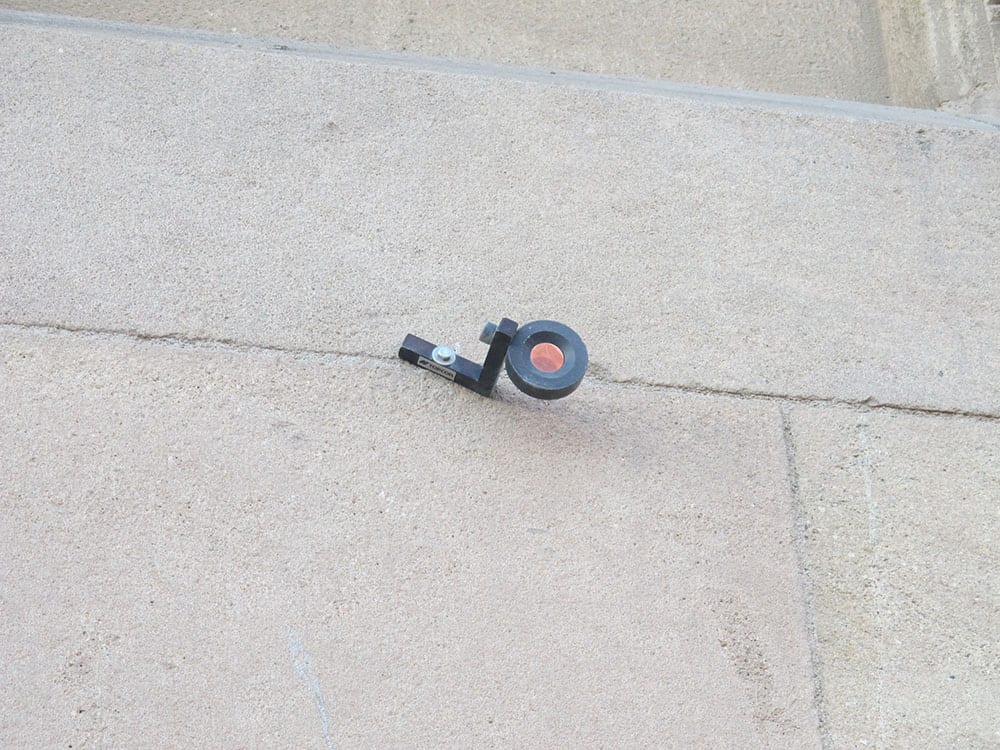 In other cases, must be installed the station that issues the optical rays to the various prisms either inside or outside of the Temple.

The system of devices has various types of sensors. On the one hand, we have those that take data on the movement of the building, which include:

It is also worth noting that the devices are becoming more and more sophisticated as time passes. This the case, for example, of the crack monitors: now there are ones with two and three dimensions. The latter are necessary when a crack is moving perpendicular to the crack plane.

On the other hand, there are the sensors to take down environmental data. Full meteorological stations monitor data such as temperature, humidity and precipitation, and, there are anemometers at various heights to monitor the speed and the direction of the wind at the various levels. Plus, there are also pollution sensors, which detect both gasses and particles.

Monitoring and correlating data is a complex task. It must be determined whether the movement of a crack is due to the building vibrating as a result of the wind, or whether it has widened due to temperature changes before it is clear whether it is a structural warning sign. This is why it is so important to centralise, systematise and automate data collection to distinguish cyclical movements, those that are atmospheric in nature, from the rest.

So, for example, it has been detected that the first layers of pollution on the stone of the building are from a time when the city burned coal to fuel its numerous steam engines. Fortunately, this is no longer the case. By monitoring the pollution data, however, we can predict which new layers will form on the stone and determine the best way to clean it periodically.

After nearly two years working with these devices, they have started to yield their first results: meteorological changes cause movements in the Temple that are detected immediately.

Looking at the height of the towers, for example, we have detected that, over the course of the year, due to the effects of the ambient temperature alone, the height of the towers can vary by 1 cm. This means that, in the summer, the heat causes them to dilate and they grow roughly 5 mm, and, in the winter, they contract and become about 5 mm shorter. Looking at a graph of the temperatures and movements over the course of a year, this parallel relationship between the two sine waves becomes very clear. 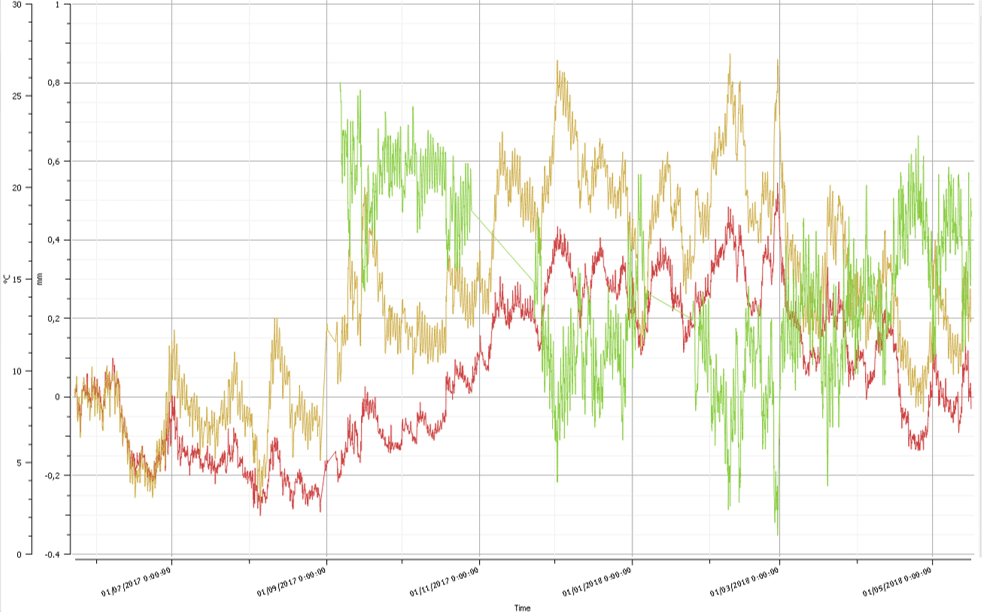 There are cracks, however, that are affected by temperature in an inverse manner. When the temperature drops, the materials contract and the cracks get wider.

We have also looked at how construction of the crossing towers affects the columns in the crypt, and the system, which is highly precise, has detected more movement in the columns closer to the crossing and less impact on the rest. All of the interior columns are also monitored at all times from a station inside that also connects to the outside through tiny holes that had to be drilled. So, the combined data from inside and outside the Temple shows which part of each movement is due to natural environmental changes and which part could be a warning sign of varying degrees of danger.

The final purpose, therefore, is to establish a mathematical computer model that, from a minimum number of cycles, can draw conclusions more or less automatically to come up with a well-considered table of different warning levels to make it easier to detect issues early. This way, any structural issues will be identified before it is too late to repair them.