The core comprised of the staircase and lift inside the lantern of Jesus Christ is an example of the work with tensioned stone that has been carried out at the Temple since this technology was incorporated into the project and the construction of the central lanterns.

DESCRIPTION OF THE CORE GEOMETRY

The basic shape of this tower inside the tower of Jesus Christ looks like a hyperboloid, as it gets thinner in the middle and opens up again at the top. However, it is made of four large main paraboloids that surround the whole thing from top to bottom and give it the shape of a continuous parabola. Two hyperboloids complete the other surfaces, more closed at the bottom and more open on top.

The straight generatrix lines of the paraboloids make it possible to pierce the surface. This generates rhomboid openings that make the core more transparent, remove weight and allow visitors to see out from inside and vice versa. This showcases the spiral staircase inside, which is the very reason behind this core.

As a result of this opening effect, towards the top the spiral staircase separates from the lift inside, which is perfectly vertical. So, the staircase doesn’t touch the lift in the final third of the core and the steps are floating, meaning they are attached to the core wall and suspended in the air on the inside. This made it possible to design a truly light and transparent lift. 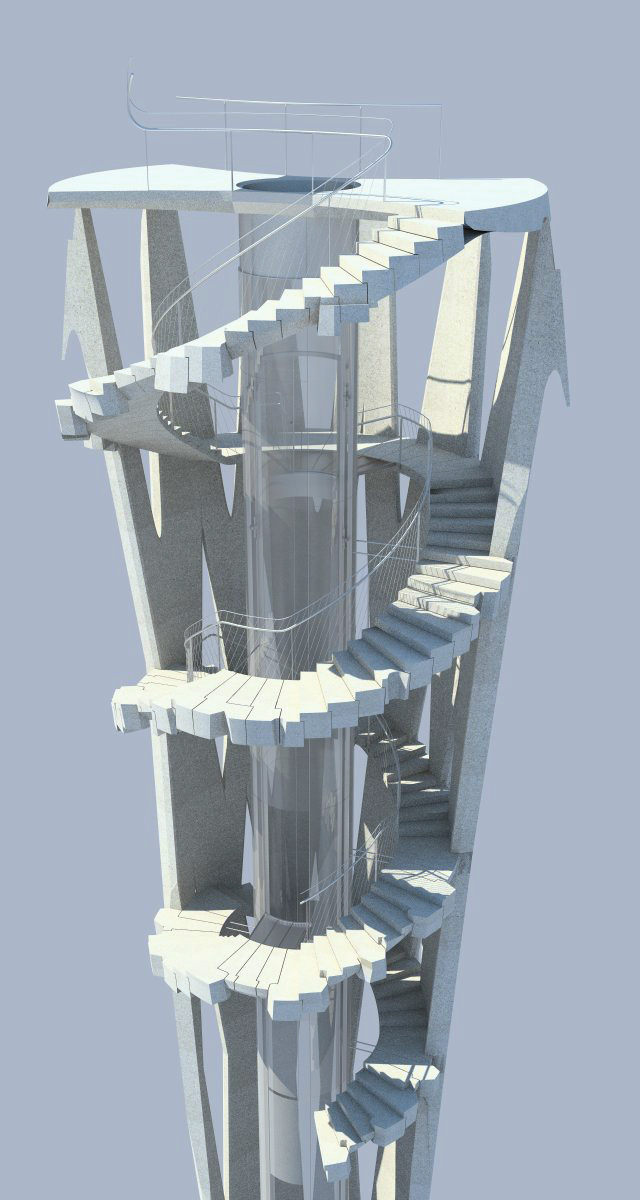 For its part, the lower section of the stone core is made of four large pillars with four large openings, in the form of parabolic arches of different heights. These get taller, following the ascending line of the staircase, letting visitors move into the inner core. The parabolic archways are opposite the doorways into the towers of the Evangelists, which are also parabolic arches, giving it all coherence.

In planning the project, it was clear that the central spiral staircase was a necessary functional premise, but wanting to make it out of solid stone was truly a challenge. Because, for a stone step to be supported only on one side, it has to be attached very well, meaning it has to have enough weight on the side built into the wall to compensate the tendency to flip over. But this option wouldn’t work if it meant having a thick, heavy wall, because the goal was a wall that looks as transparent as possible and frees up the ground level as much as possible. Plus, some of the stairs can’t touch either side, as they are located at the rhomboid windows, meaning there is no wall on the outer edge either. Finally, at the top of the core, where there is really a lot of open space and not much wall, and as there isn’t much weight, attaching the stairs was going to be complicated.

So, using tensioned stone seemed like the only possible solution: on the one hand, it compensated for the lack of weight when it was necessary, and, on the other, it ensured that all the steps would be stable, whether they were attached to the core wall or totally floating and connected together as a series of steps. This way, after the success of testing the tensioned stone for the exterior panels of the tower, we opted to use this system to resolve this unique structural issue on the core, too. 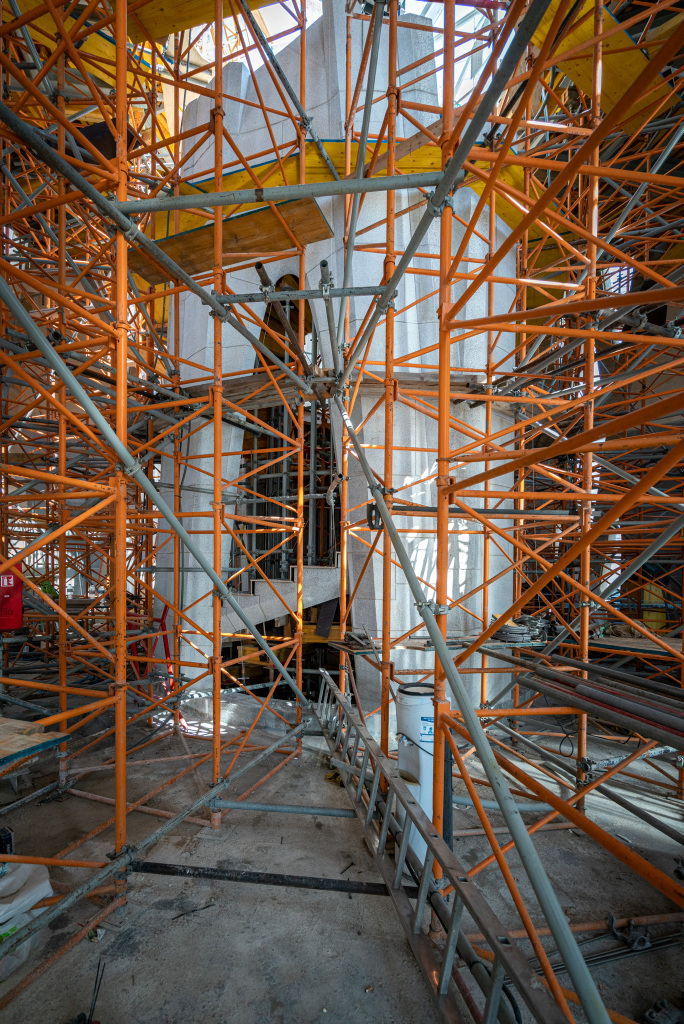 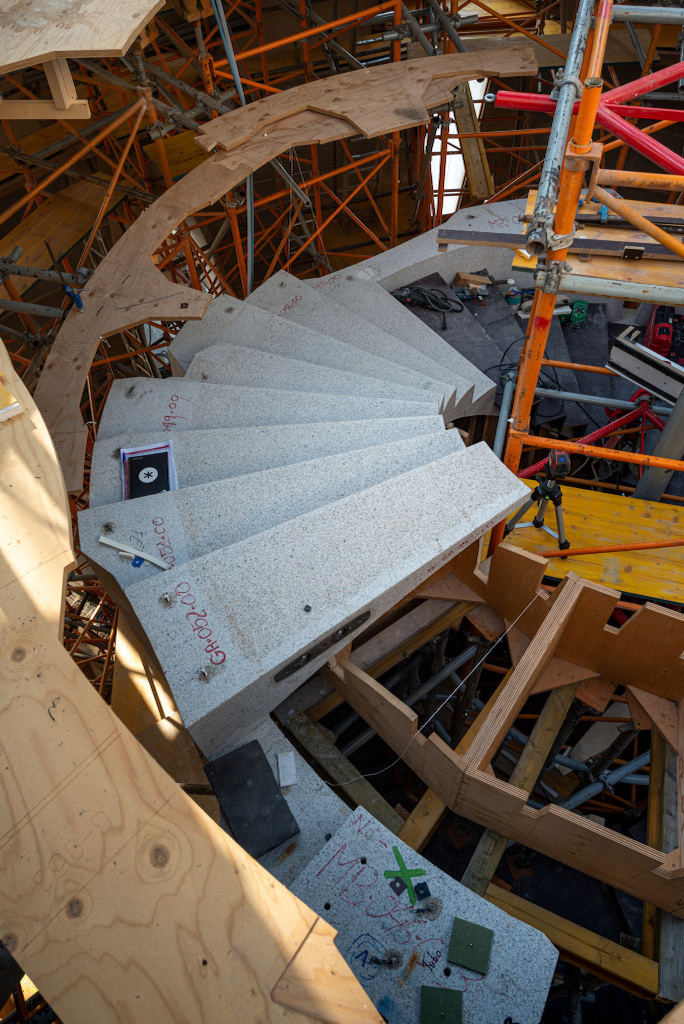 TYPES OF TENSIONED STONE IN THE CORE

So, there are two types of tensioned stone in the core. First, there is the tensioned-stone wall of the core, at the top, between 35 and 60 metres, to compensate the lack of weight in this area. Plus, on the first 9 metres, the core wall doesn’t use tensioned stone and then there is only minimal tensioning of the perimeter of the rhomboid openings, until the tensioned stone starts, which is particularly important on the top. On the other hand, we have the tensioning on the steps, which is helicoidal and makes sure each step is strong and held in place with the previous step.

The system used in the first case, despite the differences, is quite similar to that on the panels for the central towers. Here, the tensing rods are slanted to go around the openings, in this case rhomboid shapes. For the core of the tower of Jesus Christ, these rods couldn’t be very long or far from the centre of the stone in each section. So, like on the outer panels, these alternate between single rods (in the centre) and pairs of rods, alternating the two at transition points, following the pattern 1-2-1-2-1…

The system used for the helicoidal tensioning of the steps on the staircase was more sophisticated than initially thought and had to take into account various constructive challenges.

In this regard, it is important to remember, firstly, that the steps of a spiral staircase are always wider on the outer edge. The further out towards the outer edge, the greater the width (tread) compared to the height (riser). This means that each of the three tensioning rods has a different angle, and that the anchor that holds them is never perpendicular in all three directions at the same time. So, special nuts had to be designed, with a spherical head on one side so they could be adjusted depending on the alignment of each rod, as well as a system to keep them in place, despite this margin for adjustment. In this case, the rods needed to attach the steps to each other follow the sequence 2-3-2-3-2…

Secondly, we had to resolve the issue of the mortar joins between steps. As the idea was to tension them, the mortar wouldn’t be simply to fill the joins. It would be structural mortar, having to stand up to the compression forces the piece would be subjected to. So, after filling two steps with this material, it had to be left to harden to the right level before it could be tensioned. This time was estimated at seven hours. So, adding to this the time it takes to carry out the tensioning and laying out and marking the next step, it would take a full work day. This means that, at most, one step can be put in per day, which in the end has set the pace of work, and, therefore, that of manufacturing and stocks. 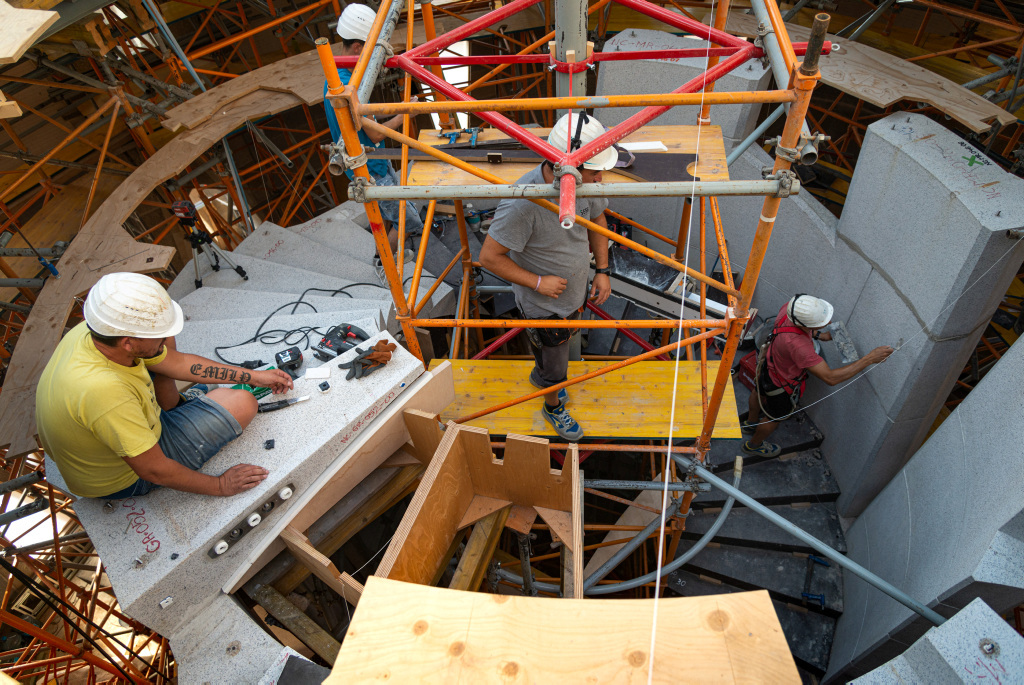 Therefore, this inner 60-metre tower, despite having a thin wall so it can stand this height, is made up of huge solid-stone blocks that are visible inside and out, making it very strong. To make it look lighter, a light colour was chosen. Since it also had to be very strong structurally to withstand the simple compression forces, Cristal white granite was chosen. The pieces are broken into large blocks, 81-centimetre tall, which is the equivalent of 5 steps, and variable horizontal dimensions, which can be up to 2.00 x 0.80 metres. From the outside of the core, the steps of the staircase can be seen in the joins, as there is a strip of interconnected squares that follows the spiral of the staircase, showing that the risers go all the way through the wall and are held in place perfectly by its weight.

The inner rods that tension these huge stone blocks have to hold together up to four or five 81-centimetre blocks in some cases. This requires a level of precision in executing the pieces that is unheard of in stone mechanisation workshops, as it must ensure just the right location, diameter and angle of each and every hole. Otherwise, the tensioning rod wouldn’t be able to pass through improperly centred holes. 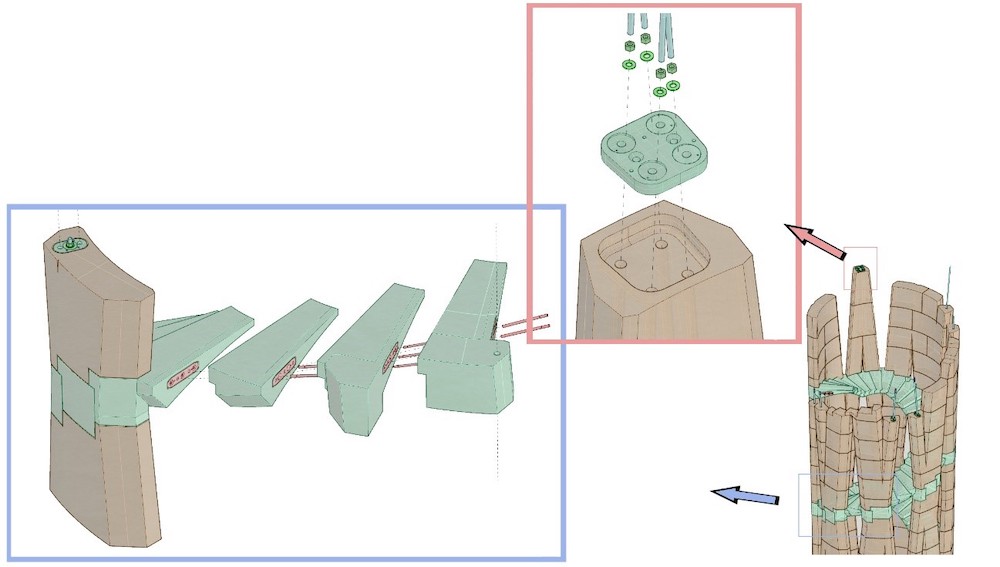 So, instead of being created from large, pre-assembled panels of tensioned stone like the central towers, the staircase in the core of the tower of Jesus Christ will go up step by step, day by day, bit by bit, following this path until the work is finished.

The Sagrada Família: a Temple monitored 24 hours a day