Readers already know that Gaudí wasn’t in charge of the original design or initial stages of construction on the Sagrada Família. These were overseen by architect Francisco de Paula del Villar y Lozano. When Gaudí came to the project, most of the foundations had been laid and the work on the crypt was under way. Nevertheless, he immediately implemented ++++++++some not at all negligible changes. Later, after studying the whole Temple, his changes would be enormous.

Among the first changes, it is worth noting what he did in the crypt: removing the central staircase and instead creating two circular staircases on the sides, improving ventilation and lighting, and changing the style of the capitals. Later, he increased the size of the Temple in all directions: the width and length of the nave and transept; the height, number of towers, lanterns and bell towers; the cloister surrounding the Temple, the auxiliary chapels and buildings, etc. However one of the changes that has always intrigued the more observant and interested visitors is his use of the 7.5-metre module.

MEASUREMENTS OF THE ORIGINAL PROJECT

The work on the crypt that was under way when Gaudí arrived on the scene left two unalterable measurements that affected his redesign of the main floor, just above the crypt.

Therefore, the difference between the two is 6.3 metres on either side, which is the width of the ambulatory. These numbers don’t have any relationship through divisors or multiples, and it doesn’t seem that del Villar had used any sort of module or base measurement.

Continuing with this alignment, the del Villar project would have had a central nave measuring 17.4 metres wide and a side nave of 6.3 metres on either side. However, when Gaudí took over the drawings for the floor plans, he didn’t follow this alignment but closed the ambulatory of columns in the presbytery approaching the crossing, giving the floor plan a horseshoe shape. The columns in front of the spiral staircases, which extend the semicircle, are nearly 17 metres, and the basalt columns of St. Paul and St. Peter are exactly 15 metres apart, a multiple of the module that seeks to systematise the floor plan and would later also be used to systematise the heights inside and outside for the whole project: the 7.5-metre module. 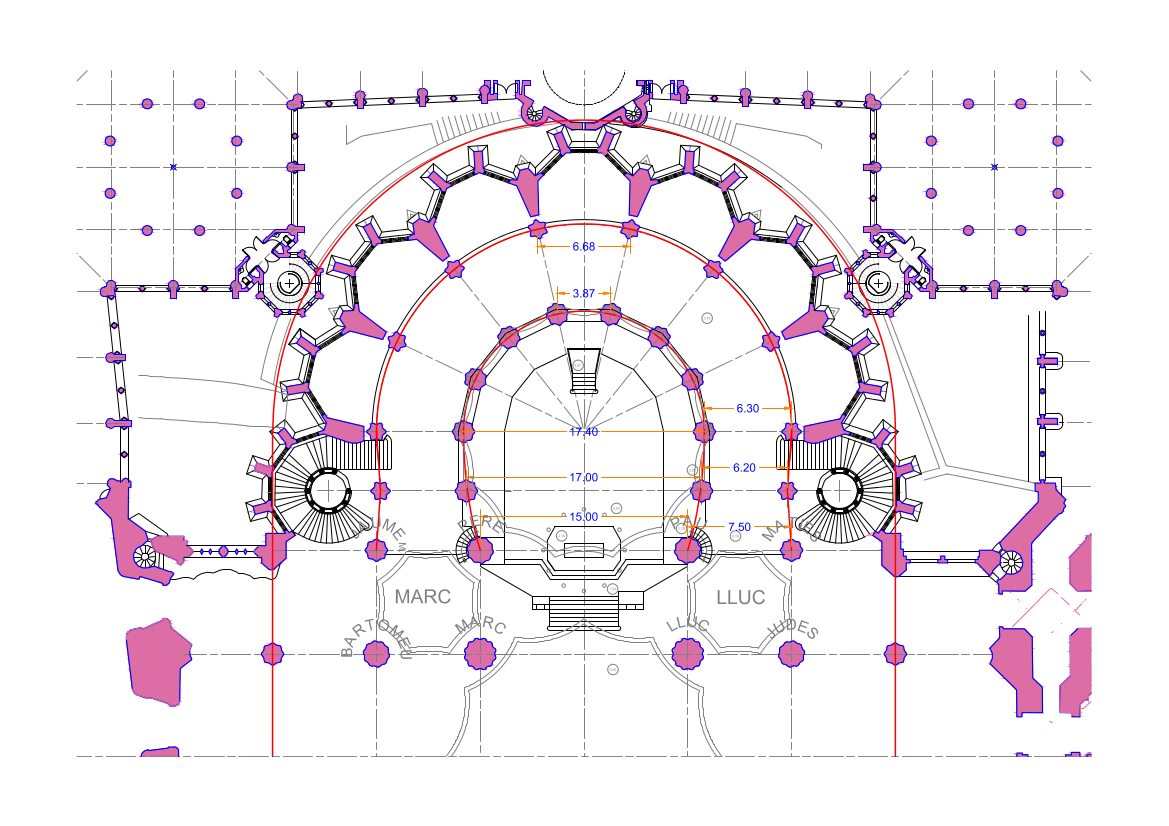 This floor plan with the dimensions shows that Gaudí didn’t follow the natural alignment. The change isn’t accidental. It is a small shift, a gesture clearly showing his desire to seek out a specific measurement.

Laying out the whole range of possibilities Gaudí had before him, putting ourselves in his shoes in those first moments of reflecting on this critical choice, allows us to see the logic behind his choice quite clearly. In fact, this is when, from the multidisciplinary view he was known for, we discover a series of possible arguments that could have influenced his decision.

1) The geometric hierarchy of the floor plan

Dealing with the geometric hierarchy of the floor plan could seem like a medieval or Gothic approach, which Gaudí distanced himself from, overcoming or “perfecting” it, as he said. In fact, although shifting from the initial alignment can be seen as chaos and not order, with the 7.5-metre module he was really seeking a new order, the power of which can be seen when it is understood as a base measurement for the whole Temple in three dimensions: vertically and horizontally. For example, the multiples of the 15×15-metre square of the crossing, twice the base module, are used to determine the height of the whole project for the naves, which proposes:

So, with a total of twelve parts, it is easy to divide into halves, thirds or quarters, basic proportions characteristic of Gaudí’s designs for the Temple.

2) The division of the pre-existing

Gaudí sought to find a base module in the existing construction in order to transition from it instead of implementing a sharp shift. The pre-existing elements offered Gaudí two options for his base measurement: the width of the whole apse, meaning the external dimension (30 metres), or the internal measurement of 17.4 metres.

The latter, which is that of the semicircle of columns that encloses the presbytery, altar and centre of all celebrations, is important because it defines the space, establishes its boundaries. So, this internal measurement could have been considered the main or top-priority base module. However this isn’t what Gaudí did.

Taking this internal measurement as the base for generating a grid to lay out the position of all the columns in the Temple left him with two possibilities: splitting the space in two, with an 8.7-metre module (17.4 / 2 = 8.7 metres), which could be a bit too big, or splitting it in three, which would be too small (5.8 metres). 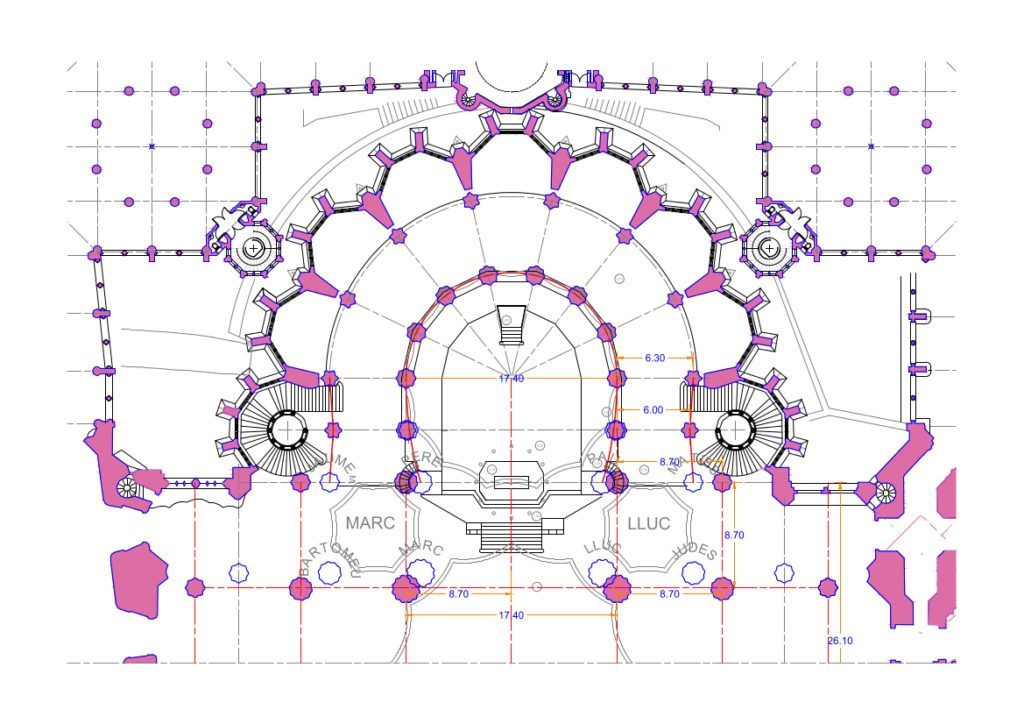 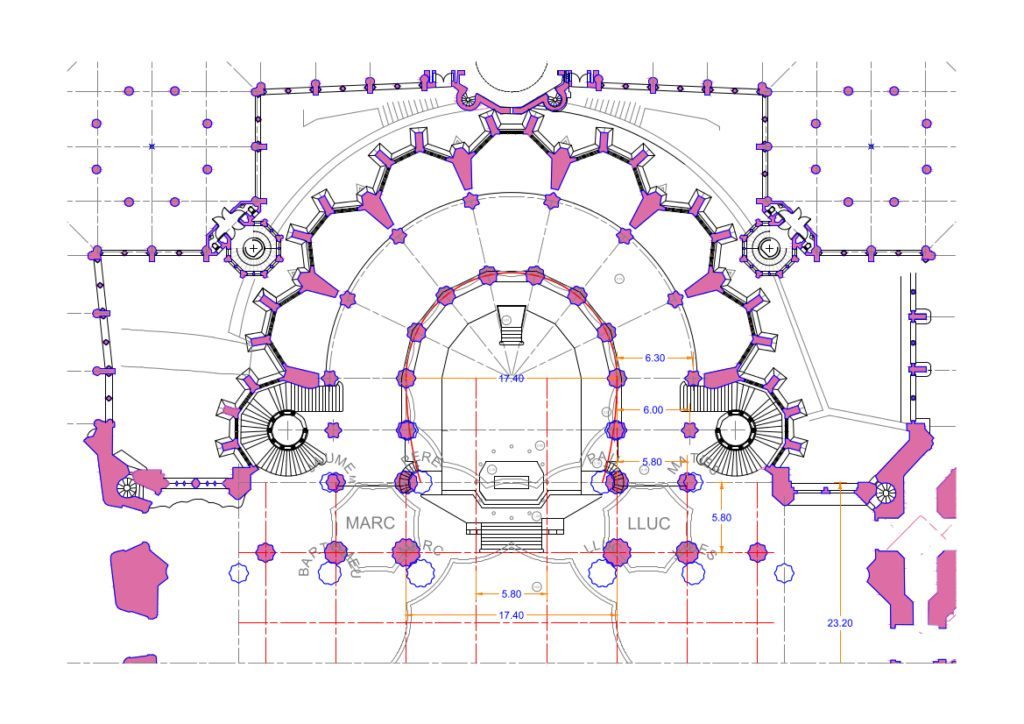 Starting from the external measurement of the apse (30 metres), however, opened up a whole range of options.

These options could be further refined, but they would become less and less clear. 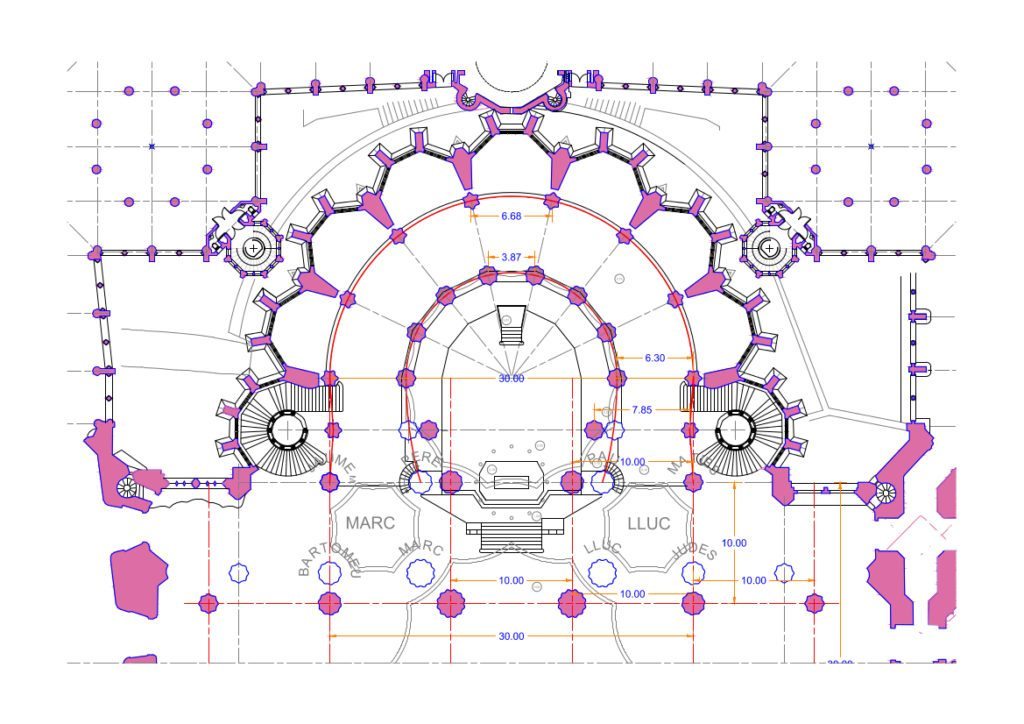 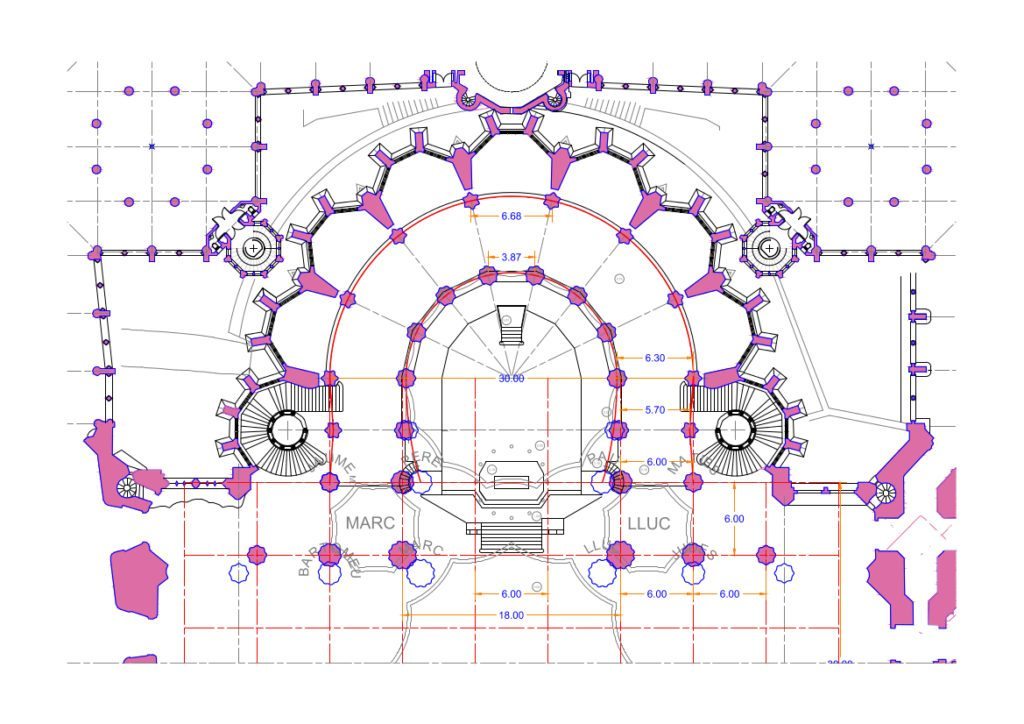 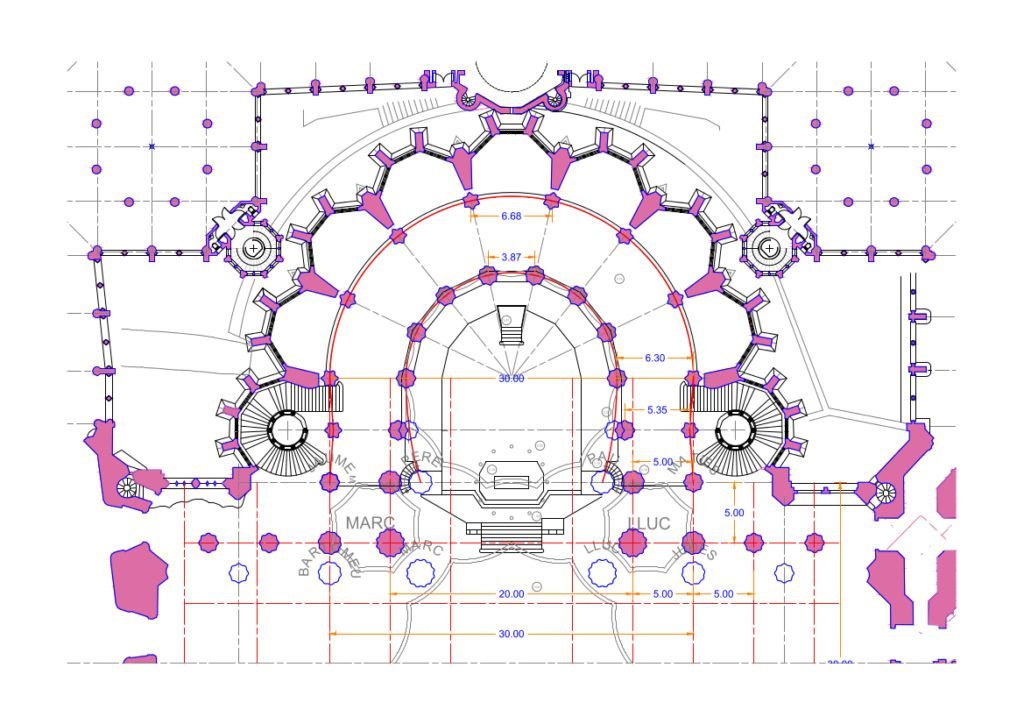 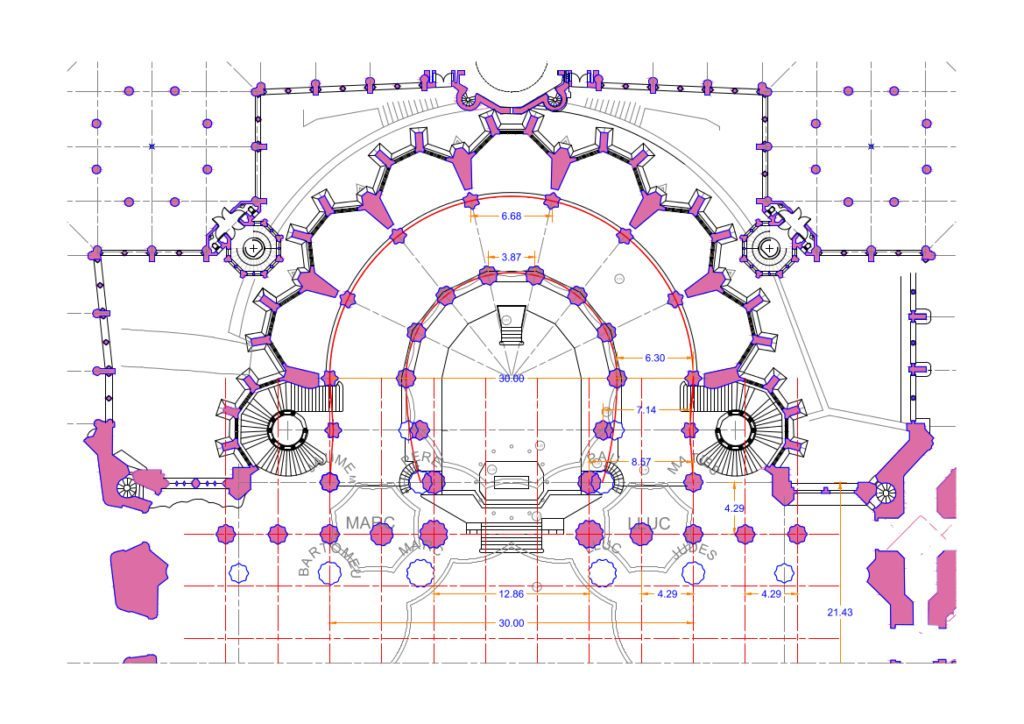 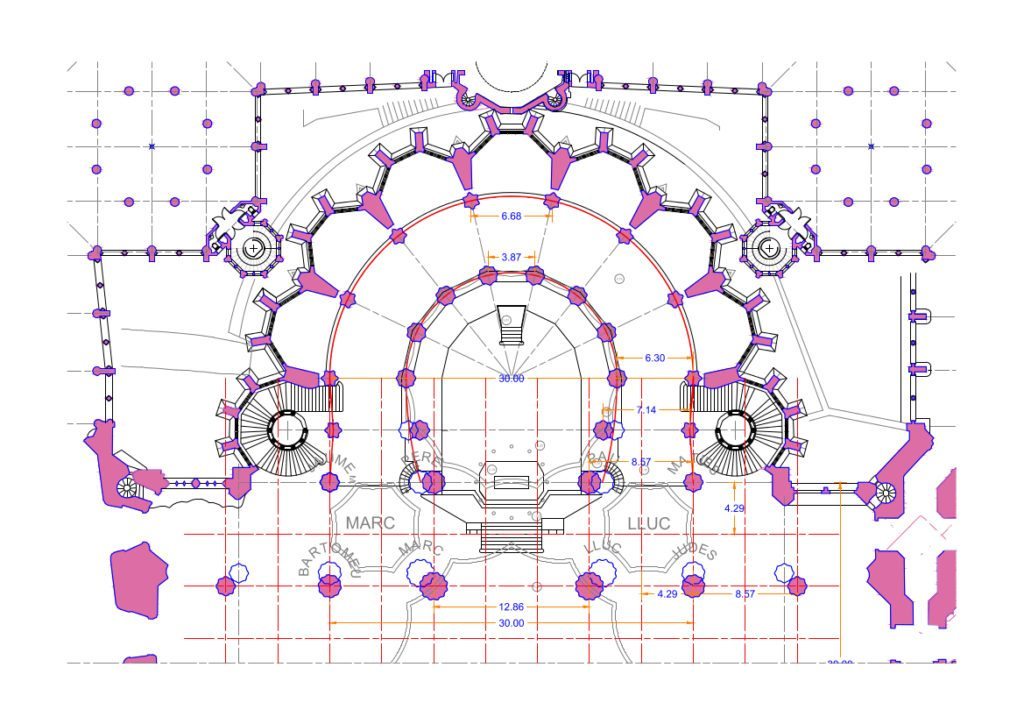 Another pre-existing measurement that could also be considered an influential factor is the exterior measurement of the apse as a whole, including the two spiral staircases, which is 45 metres. This measurement wholly supported the 7.5-metre module, as it is a multiple of both 30 and 45.

3) Structural experience with the cathedral in Palma de Mallorca

Gaudí gained extensive knowledge of Gothic cathedrals by studying them from a mechanical point of view, with vector graphics showing the loads passing through the buttresses and flying buttresses into the foundations. This happened when he was commissioned to do work on the cathedral in Palma de Mallorca, for which he conducted an exhaustive study. In addition to renovating the nave and presbytery, this commission required him to study whether the vertical shift of the columns was serious enough to affect the building’s structural soundness. 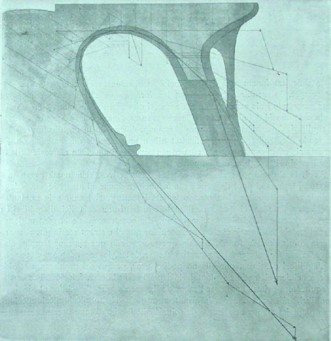 Thanks to the work of Joan Rubió, Gaudí’s collaborator and an expert in graphic funicular studies from the works on the viaducts at Bellesguard and Park Güell, they were able to stabilise the columns. With these studies of the cathedral in Palma de Mallorca, they saw the limitations of the Gothic system, which in France had continued growing upwards to the extreme case of the Beauvais Cathedral, which standing 52 metres tall was unstable and lost most of its vaulting.

The comparison Gaudí and Rubió made between the Cathedral in Mallorca and those in other cities clearly shows that the one in the Balearic Islands is one of the most important Gothic cathedrals known in terms of height and width. So, it is logical to think that this in-depth structural study warned Gaudí of how close they were to their limits. Mallorca has one central nave that is 12 metres wide and 44 metres tall and side naves that are 33 metres tall. So, we can see how Gaudí adjusted the measurements he had learned in Mallorca to multiples of 7.5 metres (the central nave 15 metres wide and 45 metres tall, the side naves 30 metres tall).

4) The symbolism of numbers

Taking into account that an in-depth analysis of everything that Gaudí designed always finds several readings that tend to fit together as a united whole (geometry, mechanics and symbolism), in this case we think there may also be a symbolic motivation for him choosing the number 7.5. In secular symbology, and in Christian symbology historically, numbers are associated with meaning: 3, the Trinity; 4, the earthly order; 12, the whole, etc. By choosing 7.5, halfway between 7 and 8, perhaps Gaudí was looking to bring in the symbolism of both of these numbers. Some religions believe 7 represents good and 8, evil; so 7.5 would fall between, or above, good and evil. The number 7 occurs frequently in symbology: there are 7 days of the week and of creation, 7 planets, 7 holy sacraments, 7 sayings of Jesus on the cross, 7 capital sins, 7 gifts of the Holy Spirit and 7 acts of mercy; but also 7 colours in the rainbow, 7 metals of antiquity, 7 musical notes, 7 piano scales and 7 sages of ancient Greece.

About the number 8 we can say that, on the one hand, it has often been associated with the resurrection because of the octagonal shape of the Church of the Holy Sepulchre and, on the other, with baptism, as many baptisteries and baptismal fonts are octagonal. The connection between baptism and resurrection, beginning and end, alpha and omega, also gives the number 8 associations with the infinite, and this concept is also represented with the numeral 8 turned on its side. The number 8 is represented with the snakes that wind around the caduceus, a balance of opposing forces, which later became the symbol of alchemy, pharmacy and laboratories. The snake that eats its own tail forms the 8 of the infinity symbol, the mathematical shape of the lemniscate. The numeral 8, moreover, represents oxygen. In the Anglo-Saxon system, a cup is 8 ounces, a gallon is 8 pints, a mile is 8 furlongs. And 8 is 2 cubed (23=8), plus it is in the Fibonacci sequence (1, 2, 3, 5, 8, 13…). In digital technology today, 8 plays a huge role as all information is bundled into packets of 8 bytes. Furthermore, there are various other examples: 8 is the number of good luck in Chinese culture; the compass rose has 8 main winds; many stars have historically been drawn with 8 points and the Knights Templar drew their cross from the intersection of an octagon and circles.

So, from this new point of view, Gaudí could also have found that all the symbolic meanings creation, the infinite, the beginning and the end, and the universe, supported his choice of 7.5.

So, looking at everything together, from a geometric, symbolic and structural standpoint, and in terms of functionality, which requires the central nave be as wide as possible, it seems clear that Gaudí’s choice was the most logical and sensible of the options, given the limitations established by the pre-existing structures.

We can each choose the argument that we find most convincing.