The double twist columns must be understood from the standpoint of Gaudí’s desire to constantly push the envelope. He had experimented with columns with helicoidal movement a lot, at Park Güell and the temple, and the helix shapes gave them a feeling of upward movement. This dynamism draws the observer’s eye upwards, connecting the earth and the heavens.

SYNTHESIS OF ARCHITECTURAL COLUMNS FROM THROUGHOUT HISTORY

Gaudí sought out a new column, one that would surpass previous ones. His goal was not to be ground-breaking or revolutionary but merely reflected his simple, characteristic desire to always do more, better. So, after dogged research, he finally came up with this new column, which brought together all the history of columns from architectural traditions around the world. However, far from classifying them as Ionic, Doric or Corinthian columns, Gaudí’s method was much more trivial, grouping them into three basic models:

In this article, we’ll look at how the double twist column he came up with is a synthesis of these three historical models, as it includes the circle, striations and helical twist.

To understand how Gaudí came up with this solution, it is important to follow his path, which as always was highly practical and empirical.

Let’s imagine a cylinder of fresh plaster, still malleable, and a wood template with a hole in the centre shaped like a star with rounded points, which Gaudí was using at the time as the cross-section of the columns. If we put the template over the column and drag it down, it will shape the cylinder leaving striations from top to bottom if moved in a straight line parallel to the axis of the cylinder. Gaudí, however, introduced the twist.

So, by twisting the template as it moved down the column, like turning a steering wheel, the cylinder was engraved just like a Solomonic column, with the helicoidal path of the helical twist. That wasn’t anything new, but what was new was doing a second pass with the template, this time twisting in the opposite direction. This time the path is not the same. The template removes the extra fresh plaster again and the result is two overlapping Solomonic columns. This new column, starting from the star to end in a circle, is thinner at the top, which gives it a svelte, elegant look, and adds more and more striations until it finally becomes a circle.

The shaft of the column generated this way is divided into sections, because in order for it not to return to the original star shape cross-section and blend progressively towards a circle, each time the number of points doubles, the previously eliminated parts accumulate and a new section is created.

See below how the simultaneous rotation in two opposite directions generates, in three sections, the different cross-sections which successively increase the number of arrises as the column rises. In each section, in order to double the number of points, it takes half the height and half the rotation each time.

We know that, for Gaudí, meaning and form are inseparable, and we can see this here too. By drawing a star on the ground (the shape of the base of the column) and moving it in helicoidally upwards, it is clearly connecting the earth and the heavens.

Furthermore, by repeating this movement twice (passing the template over the column two times in opposite directions), we are reminded that Gaudí left notes that the columns were dedicated to the saints of the various dioceses in Catalonia and the world, with the saints ascending into heaven and the angels descending to meet them. So, this can give us the key and make us think of everything that could have been in Gaudí’s mind when he decided to run the template over the column twice, in opposite directions.

The main columns inside the temple follow a hierarchy based on the what they have to support from a mechanical or structural standpoint.

First we have the columns on each of the four corners of the crossing, which have to support the load of the central lantern of Jesus Christ, as well as part of the weight of the four towers of the Evangelists that surround this lantern, plus the proportional part of the vaults and roofs along the way. For this reason, they are the most important columns.

Second are the eight columns that bear the load of the towers of the Evangelists. They are also located on the crossing, behind the first group.

After that, we have the columns in the apse and nave. While those in the apse bear the load of the tower of the Virgin Mary, they are very close together and the same as those in the nave, which support the vaults and attics on the central nave and part of the side nave.

Finally, the columns that separate the side naves from the main nave bear the weight of the choir and the side nave. They are the lightest in terms of load.

Gaudí used all the tools at his disposal, as an expert who explains and organises didactically, to differentiate these four types of columns. The differences, therefore, can be found in the star-shaped base, the diameter, the height and the type of stone used. 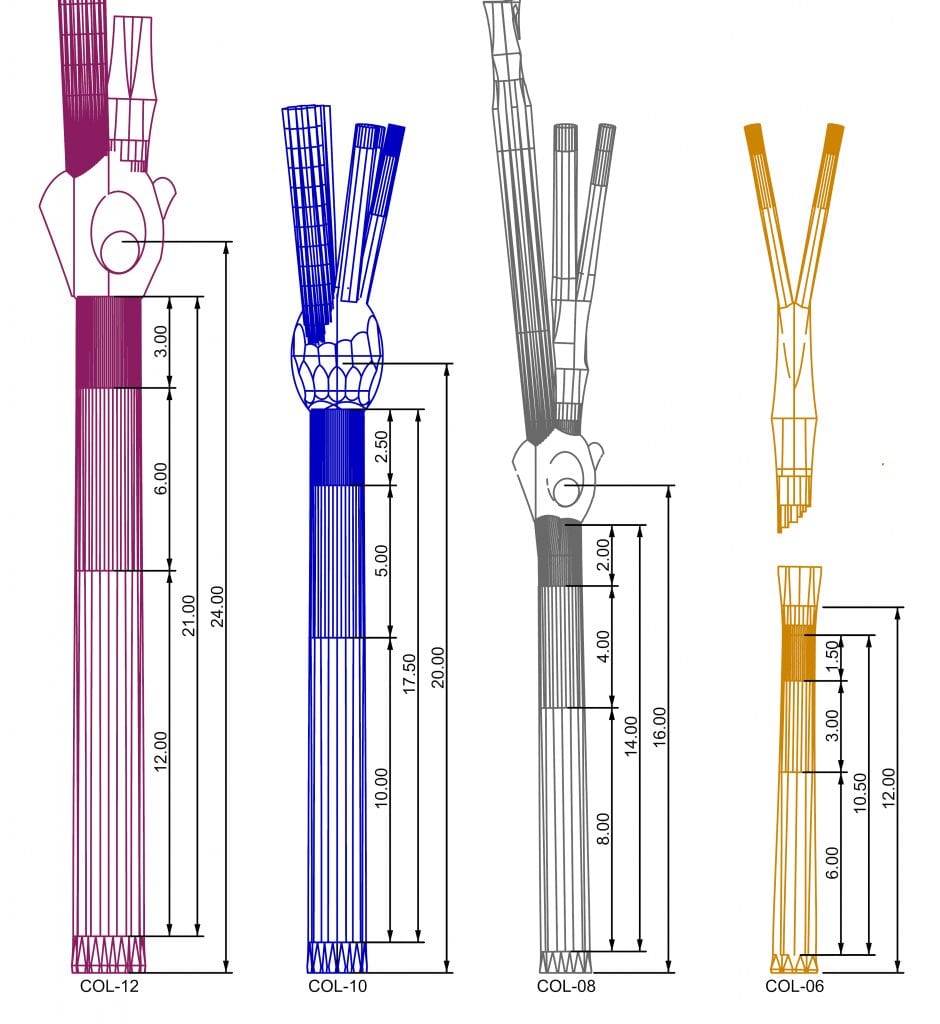 The first thing that sets the columns apart is the shape of their base, the star. This has led us to refer to the columns by the number of points on the stars used for the base. So, the column with the most has twelve points. It is, therefore, the most important from a hierarchical standpoint.

To make these stars that define each of the groups of columns, Gaudí always superimposed simpler regular polygons: the equilateral triangle, square and pentagon. So, to make the six-pointed star, he superimposed two equilateral triangles; for the eight-pointed star, two squares; for the ten-sided star, two pentagons; and for the twelve-sided star, three squares.

Therefore, the four columns on the crossing have twelve-pointed stars; the eight columns with ten-pointed stars are those of the Evangelists; the columns in the nave and apse have eight-pointed stars; and those on the side naves and the choir, six-pointed stars.

In each case, the points of the star are sharp on the inside and rounded on the outside with tangential parabolic arches. This creates a softly undulating surface at the bottom of the column, where visitors can touch them.

You can see, below, how the base stars are generated for the four types of columns at the Temple: 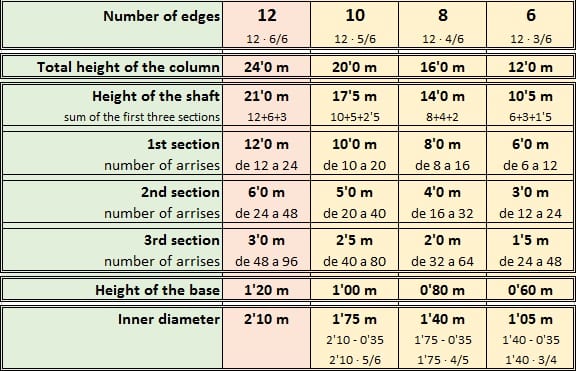 Also, multiplying the number of arrises to infinity, until you get a circle, would complicate the stone-cutting process, so Gaudí simplified it by creating ellipsoid capitals that hide the other sections. This way, the circle isn’t visible; it is hidden inside the ellipsoid of the knot or capital. 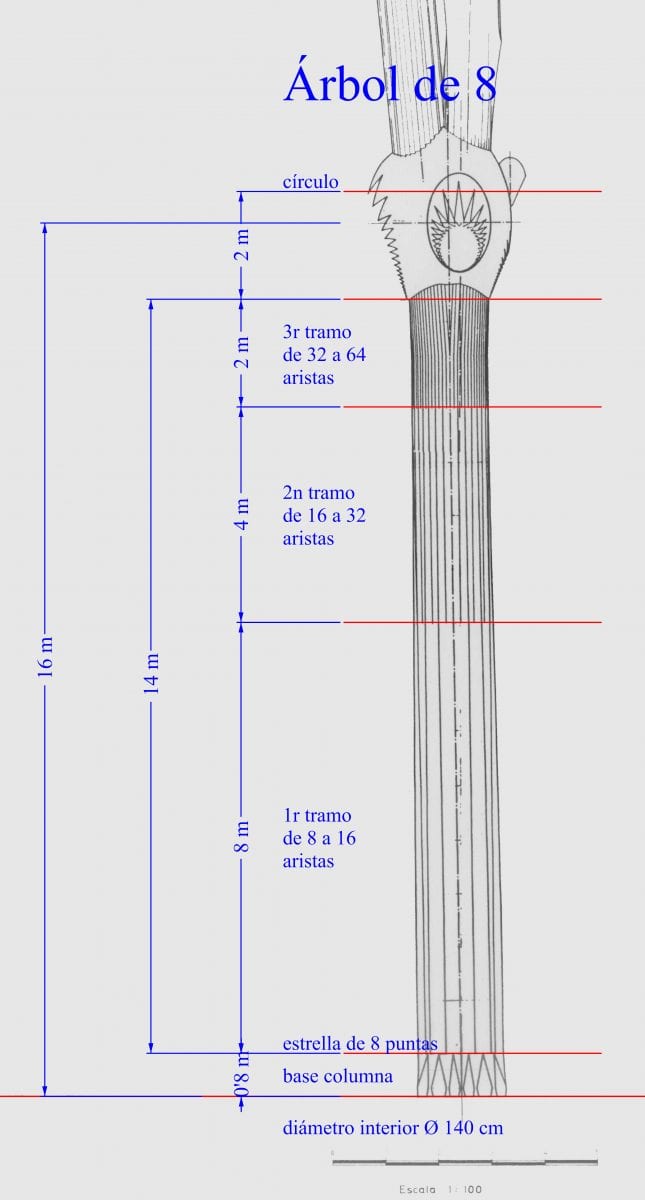 THE COLOUR OF MATERIAL

Gaudí used the materials laboratory at the then recently opened Escola Industrial on Carrer del Comte Urgell to get empirical data on the strength of a wide variety of types of stone.

With this study, he determined that the twelve-pointed columns, on the crossing, would be covered in red granite porphyry, the strongest stone used in construction. The ten-pointed columns, under the towers of the Evangelists, are clad in black basalt. The eight-pointed columns are grey granite and the six-pointed ones, yellowish sedimentary sandstone.

Despite these trials, Gaudí himself realised that the structural requirements for these columns were greater and considered using iron columns because, as was reflected in his conversations with architect and collaborator César Martinell in 1915, conventional solid stone columns would have to be so big they would eat up the space on the temple floor. In the end, he used reinforced concrete, as his right-hand man Domènec Sugranyes explained in 1923 at a conference he gave to architects from Catalonia on the structure of the temple. 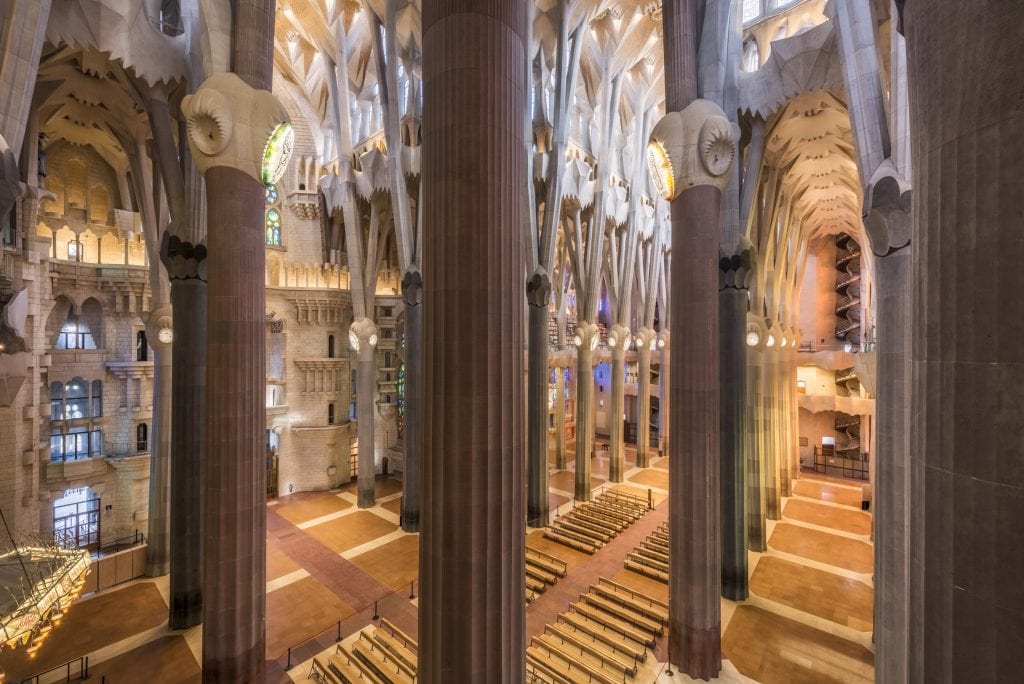 Therefore, the selection of the materials respected the initial criteria of the structural hierarchy, as these materials also significantly differ in colour, differentiating between the elements and enriching the interior of the temple with the natural colour of each material. Nevertheless, these materials are only the exterior cladding protecting the real structure, in reinforced concrete.

The main arguments Gaudí came up with for creating tree-like columns, with branches spreading out to the centre of gravity of each part of the vaults, were based on structural mechanics. Gaudí took advantage of this to shape his architecture, which ends up taking on the appearance of a lush forest. Because he wanted a space for quiet worship and inner peace, with light filtering in through the leaves, open between the trunks, possibly like the scene his friend poet Mn. Cinto Verdaguer described in his poem about Fageda d’en Jordà.