Now that we’ve put in the bases of the four bridges that connect the central lanterns 85 metres above the Temple ground, we wanted to take advantage to explain their design and building system in more detail.

At this 85-metre level, the towers of the evangelists are close to the beginning of the tower of Jesus Christ, meaning above the Crossing room and the technical floor we call the diaphragm. So, each bridge is just three and a half metres long. Despite this short distance they cover, they comprise an open space of great interest, a preamble to entering the tower of Jesus Christ.

Gaudí himself designed routes through some parts of the Temple, such as those inside the Nativity towers, where visitors come across small bridges connecting the towers from time to time, creating a unique experience of the space. In line with this philosophy, the route towards the central tower runs through open spaces, first in taking the stairs in the apse towards the inside of the towers of the evangelists on the side closest to the mountain (Luke and Mark) and then in arriving to the 85-metre level.

As we’ve mentioned previously in another article on this blog, Gaudí designed the bridges on the Nativity façade before developing his new geometric language. It was only later that he began to work with double curvature ruled surfaces, mainly paraboloids and hyperboloids, but also conoids and helicoids. For the bridges on the Passion façade, the architects who took over the project used this new geometry and, more recently, it was also used to design the bridges that connect the apse stairs and the base of the towers of the evangelists on the mountain side, 45 metres above the Temple ground. In fact, we can say that the new bridges at 85 metres we are describing in this article complete this series of designs characterised by their geometry based on twisted ruled surfaces, also setimes called “anticlastic geometry” or “of surfaces with inverse double curvature”.

The most characteristic element of this series of bridges is the three interwoven hyperbolic paraboloids on each side, making them dynamic and giving them a sense of movement. For these bridges at 85 metres, this happens at two different levels: on the one hand, below the flooring, this geometric play generates the spouts that get rid of any rainwater that falls on the bridge and any run-off from the surface of the towers; and, on the other, another set of three paraboloids sits at the height of visitors, to lighten the stone railing and make it easier to see out, as it is three-metres tall where it touches the tower of Jesus Christ. 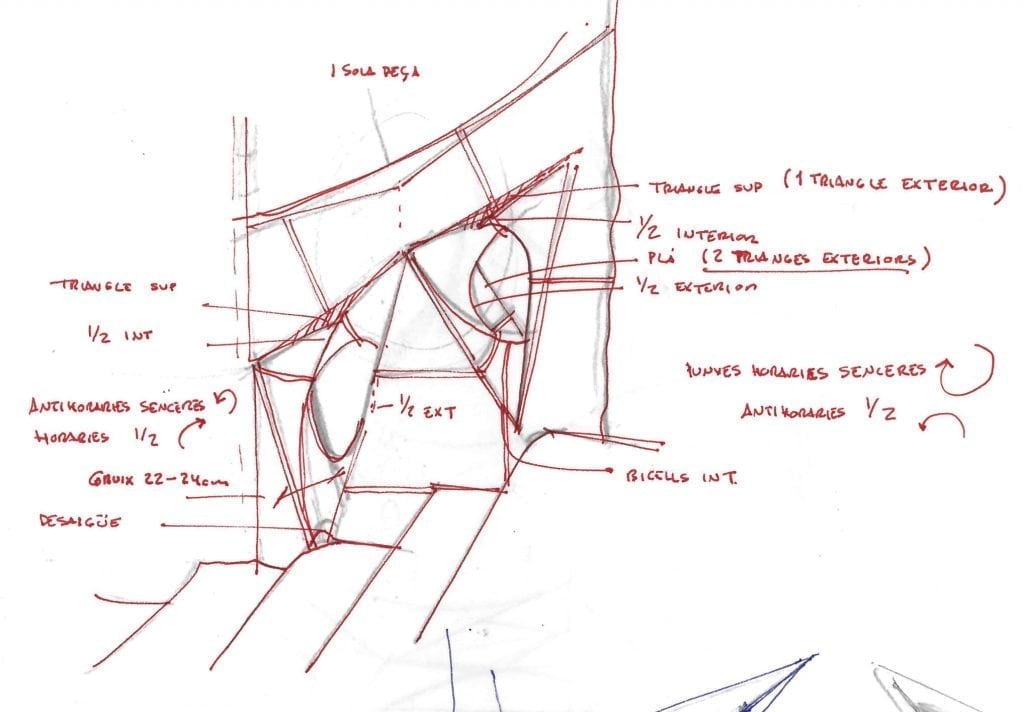 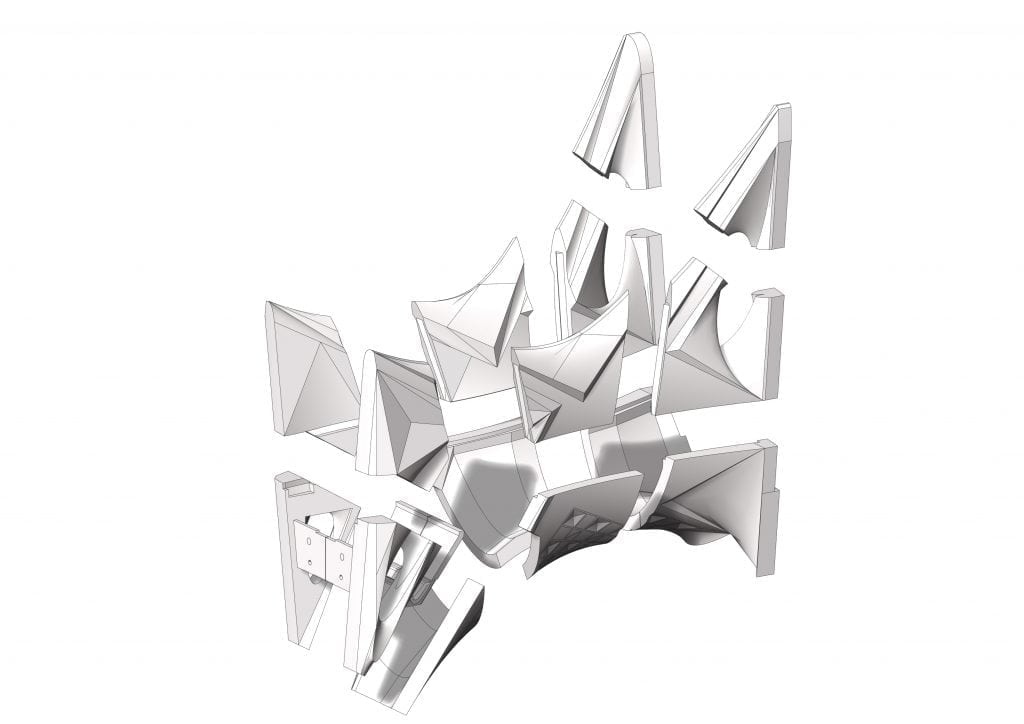 Having mentioned their resemblance to the other bridges, now we have to talk about what makes them unique. The design of these bridges has never been seen before, as their geometric base is an elliptical hyperboloid that is slightly tilted. This geometry can be seen in the floor plan, which is a hyperboloid that is narrower in the centre and wider at the ends, nearest the towers. The same is true of the stone walls on the sides and elliptical passage. The geometry of the mother hyperboloid can also be seen in the safety mesh that will cover the bridge, made up of interwoven cables that follow the generatrices of the original base hyperboloid. How the stone textures are handled also gives us hints of the geometry that comprises them, as the mother surface (the elliptical hyperboloid) has the strongest texture, coarse stipple, while the paraboloids are finished with a bush hammer and the flat surfaces are left with the polished surface. The lower body incorporates bas-relief pyramids reminiscent of the fruit designs on the pediments of the side naves, except for the Venetian glass inlay. 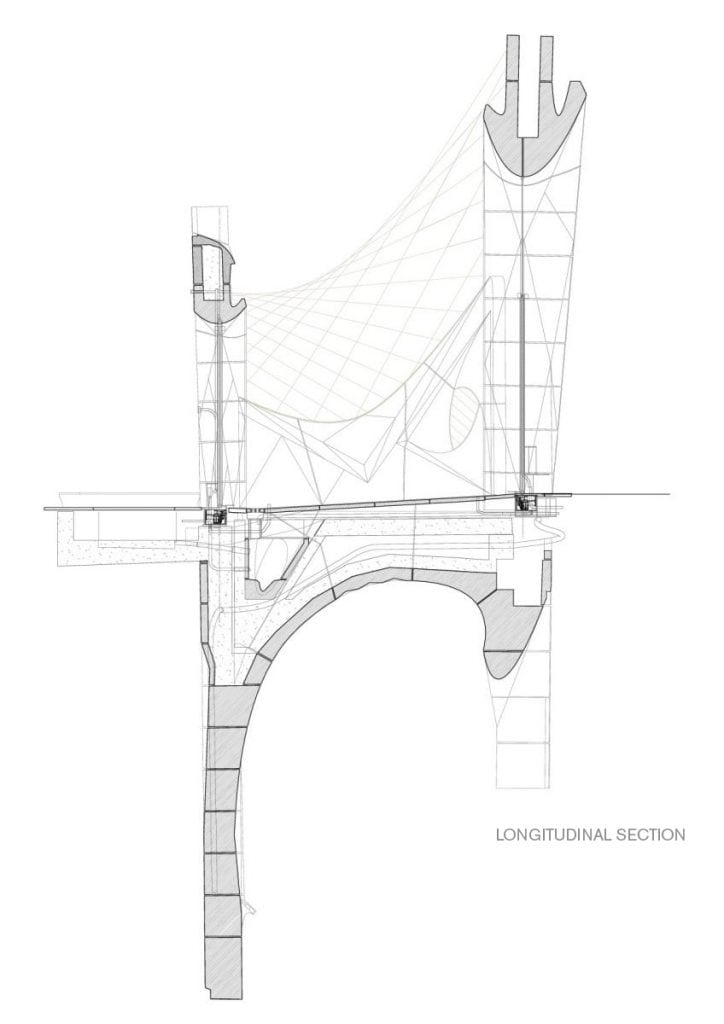 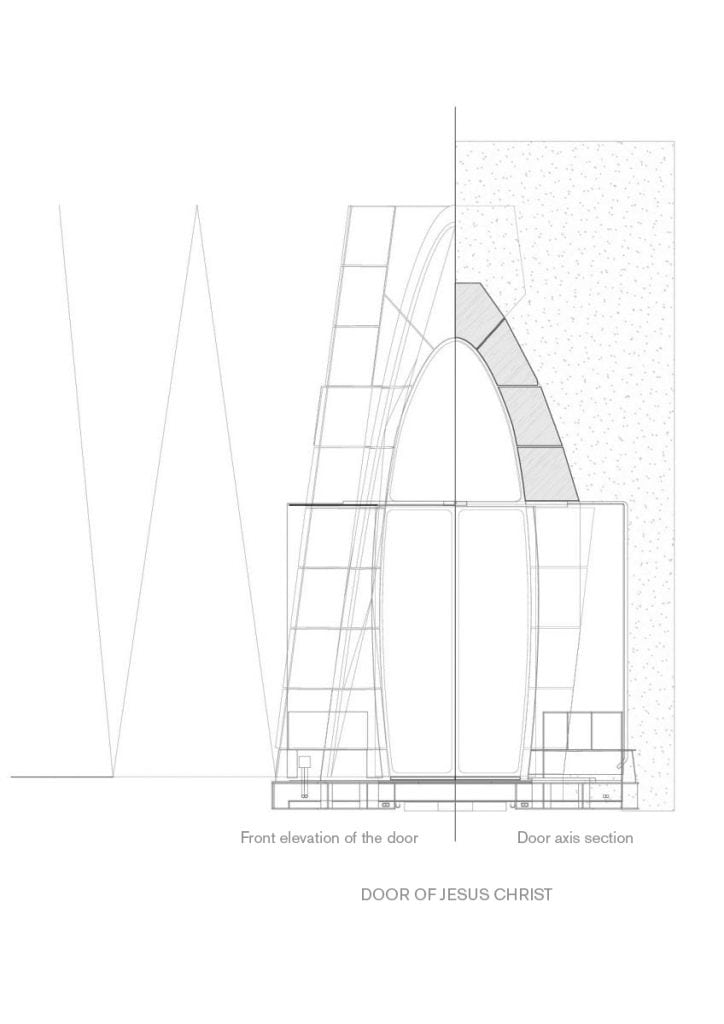 The stone chosen for the bridges also sought to blend into the part of the Temple already built with stone from Montjuïc, with its rich range of colours. In this case, as with the panels on the central towers, we have used Cantabrian sandstone, English beige and fine-grained granite from Lugo. Each bridge has a total of 4.2 cubic metres of stone (finished piece) divided into 16 pieces, 8 of which are the lower body and 8 more for the side walls.

These ‘special panels’ are very complex on a structural and architectural level, as well as in terms of installations (power, data and lightning rod) that are essential for the lanterns to operate properly. This is why they can’t be pre-assembled like the rest of the panels but must be executed on site. Swapping out a module of windows to create each door means the special panels have to be reinforced with screens of reinforced concrete so they are as rigid as those around them.

From a structural point of view, the bridges are built into the tower of Jesus Christ and merely rest on the towers of the evangelists. This has been calculated as a seismic joint, meaning it must be able to absorb differential movements between the towers. This has been tackled with a reinforced neoprene joint. 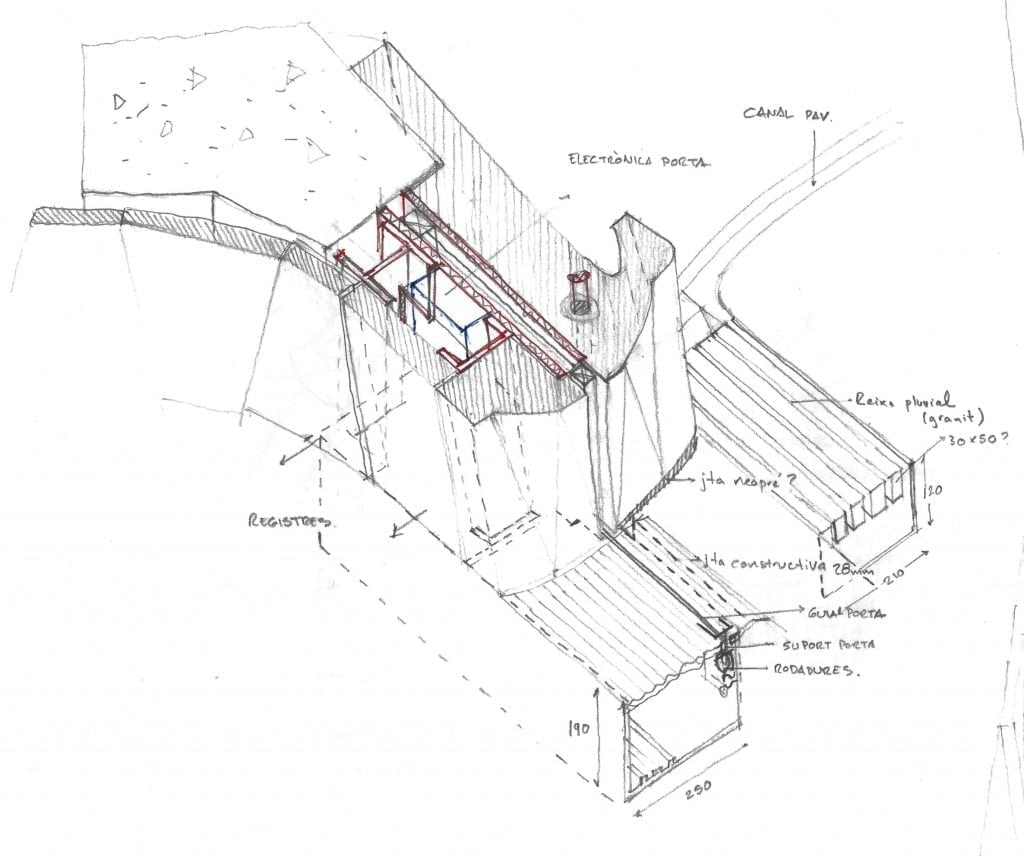 THE DOORS, CUSTOM MADE WITH EXCEPTIONAL CONTROL

In designing the visit to the tower of Jesus Christ, 85 metres up, and a suitable route for visitors crossing these bridges, the need for sliding doors came up, in order to help regulate air flow and temperature in the towers of the evangelists and the tower of Jesus Christ. In tackling this challenge, one requirement was that the doors be perfectly integrated into the architectural work. The automatic sliding doors available on the market, however, all have heavy uppers that would be difficult to integrate into the geometry of paraboloids that made up the skin of the towers. So, the conclusion was drawn that we needed a customised solution. So, the sliding doors, with leaves that tuck back into the thick stone and mechanisms under the flooring, were designed exclusively for the Sagrada Família.

About these doors, we can also add that the various mechanisms that make up this unique solution were made in France and follow standard manufacturing processes. This ensures they meet all pertinent regulations and standards including, among others, withstanding trials of one million opening and closing cycles in a test bench. Nevertheless, to ensure the overall design works properly, with these under-floor mechanisms instead of the normal top-mounted ones, the manufacturer had to test them. They put the first of these sets through 117,000 cycles in their workshop in France and 2,246 more in the installer’s workshop in Catalonia, this time with the mechanisms and doors inside the sheet-metal structure of real special panels, making sure they fit properly and that all the pieces work. 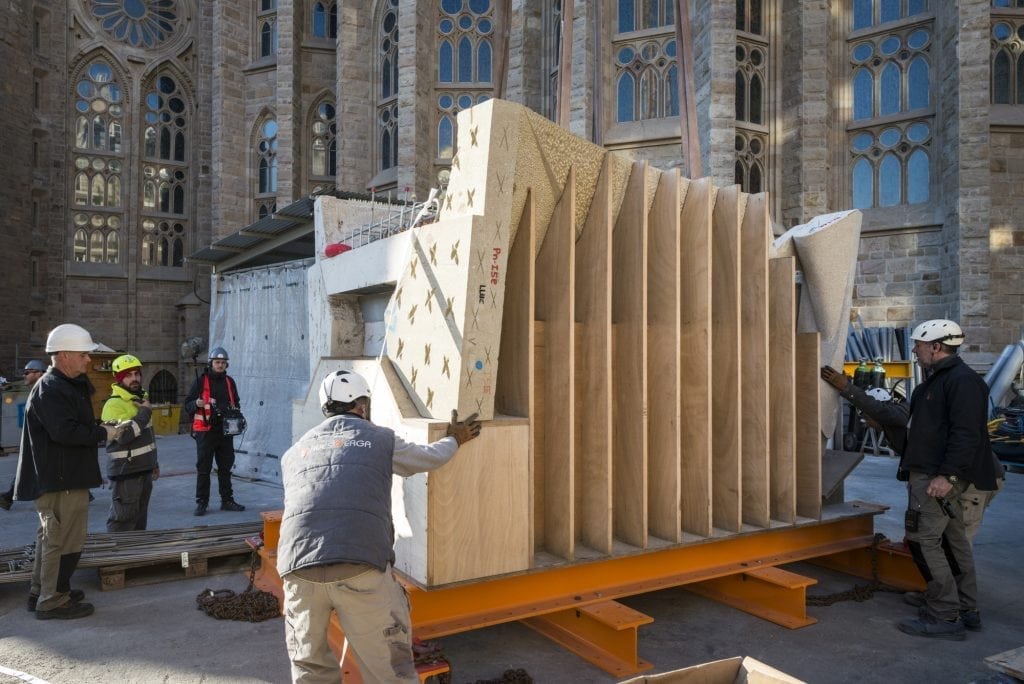 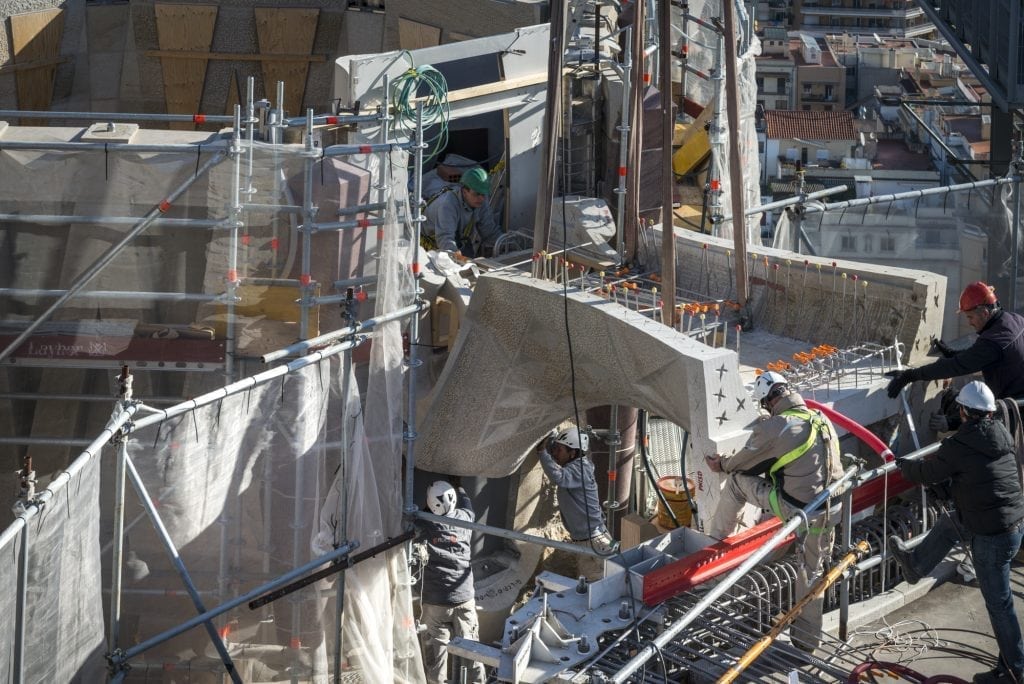 It has taken a lot of effort to resolve the architecture of these doors and many hours of team work with the engineers to resolve this joint design. We are sure, however, that it was worth it, above all taking into account the brilliant designs for sliding doors we know from Antoni Gaudí himself. For the doors to the dining room at Casa Vicens, for example, Gaudí invented a system in which both the door leaves and the floor rails could be folded away manually into the wall. Here, at the Sagrada Família, we expect these panels with the doors to be put in place before the end of the year.

Mauricio Cortés
Degree in Architecture from the National Autonomous University of Mexico (UNAM) and PhD from the Polytechnic University of Catalonia. Member of the Projects Department at the Sagrada Família since 2006. He has also worked at several architectural studios and at the UNAM Lightweight Structures Laboratory. He is currently coordinating the projects for the pinnacles on the central towers.