The columns in the nave of the Temple are designed with the complex geometry of the double-twisted spiral, the outcome of the intersection of two symmetrical spirals twisted in opposite directions. Thus, in one column that begins at the base with an eight-pointed star shape, the points multiply to become 16, 32 and 64 points, and more, generating a complex surface which has more and more arrises until it virtually becomes a smooth circle at the other end of the shaft.

Inside the Temple there are a total of 56 columns, 26 of which are 8-pointed, 8 of which are 10-pointed and 4 of which are 12-pointed. There are also six-pointed columns which were handcrafted. The four columns in the transept are eight-pointed and are devoted to the four capital cities of Catalonia bishops. There we find the one devoted to Barcelona, which is on the mountain side of the Passion façade, while on the opposite side, the sea side of the Nativity façade, is the column devoted to Lleida.

When the foundations of the Passion façade started being laid in 1954, the architect Francesc Quintana ran into a series of problems as he was trying to handcraft the Barcelona column. First, he did not yet have an exhaustive study which would enable him to grasp the geometry of the double twist column. Plus, the principles of stereotomy had to be optimised in order to effectively break down the column in terms of both its division into horizontal drums and the subdivision of each drum into a set of vertical pieces. 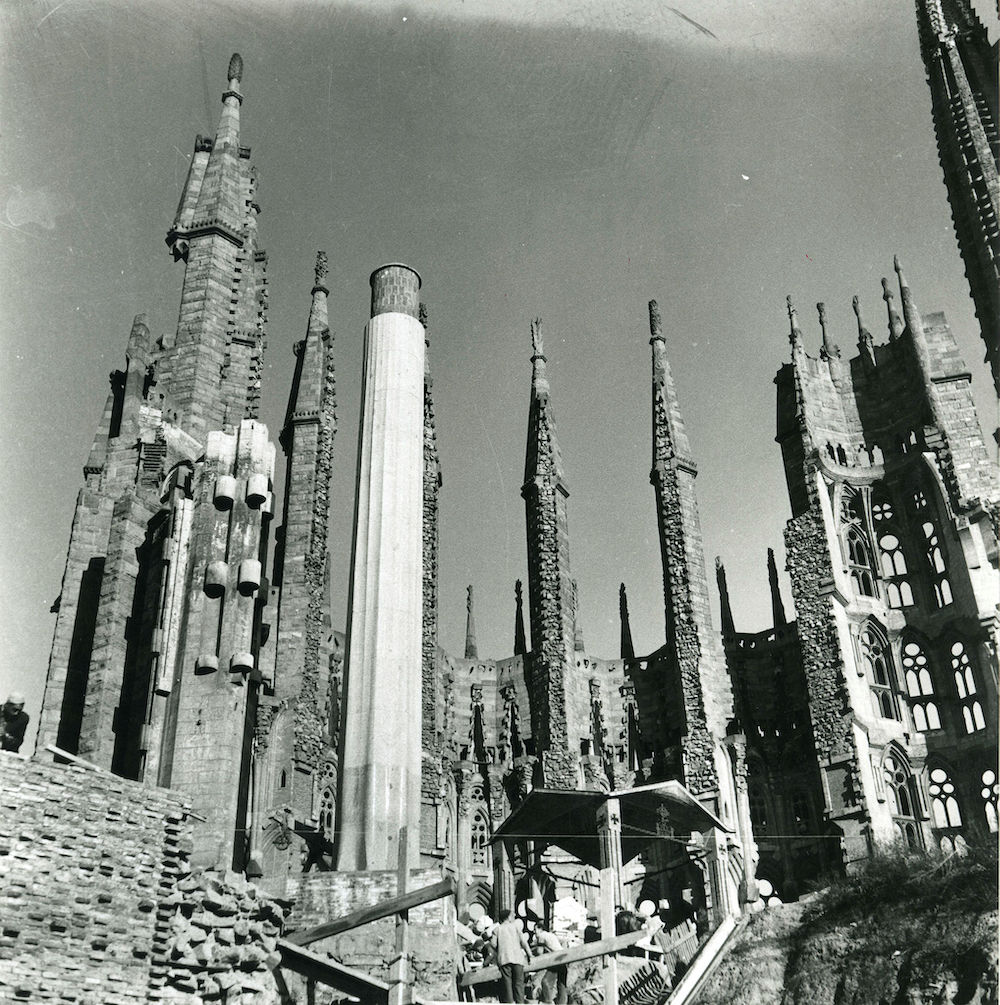 In 1987, on the proposal of the Board of Trustees of the Junta Constructora, studies began on how to streamline and lower the manufacturing costs of the double-twisted spiral columns, and it was decided to use a new automated system that would enable the stone to be cut using a computer-aided machine (CAM) by means of numerical control. 38 units of 3 different types of columns ranging from 14 to 21 metres tall had to be made.

WHAT IS CAD-CAM AND NUMERICAL CONTROL?

The abbreviation CAD means “computer-aided design”, while CAM means “computer-aided mechanisation”. In the logical order, computer-aided design should be the step prior to computer-aided mechanisation. However, seen from today, it seems logical to first make a virtual 3D design, and after the computer design is finished, to send it to a cutting machine. Yet at the beginning, the direct connections between CAD and CAM had not yet been developed, and the two technologies progressed at different paces. However today, cutting machines analyse the parameters that activate the cutting tools, their routes and movements, until ultimately yielding a real physical model which matches what was designed. Thus, the instructions received by a cutting machine to be sent a milling machine, a disk saw or a cutting belt with diamond tips are numerical instructions which regulate the movements of the cutting tools and the benches on which the raw stone that will emerge finished is placed. All of these instructions together are called numerical control. 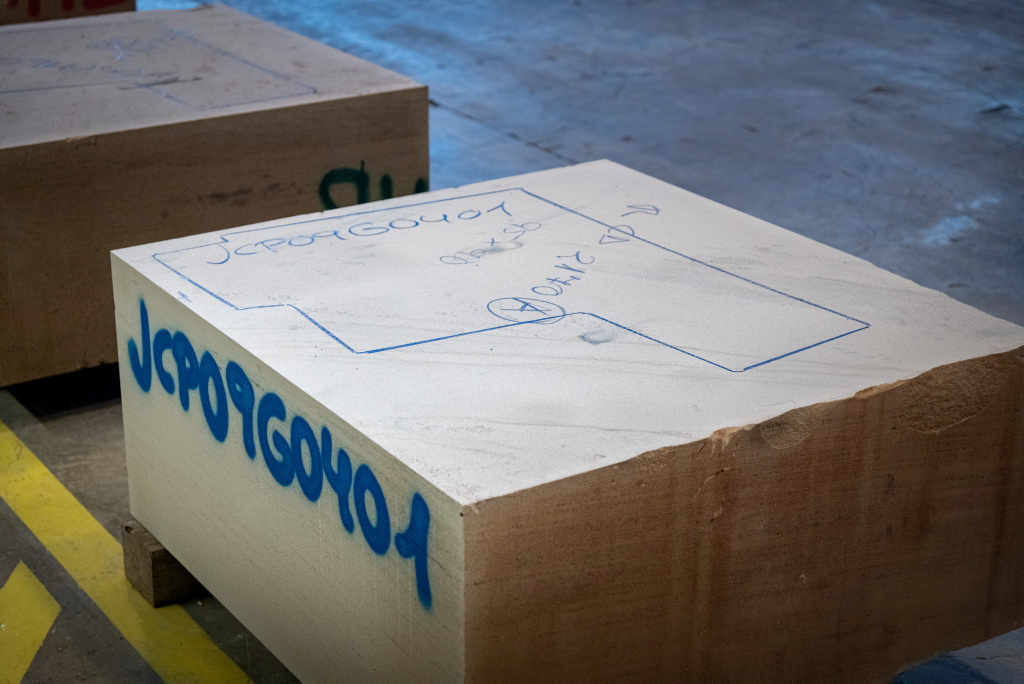 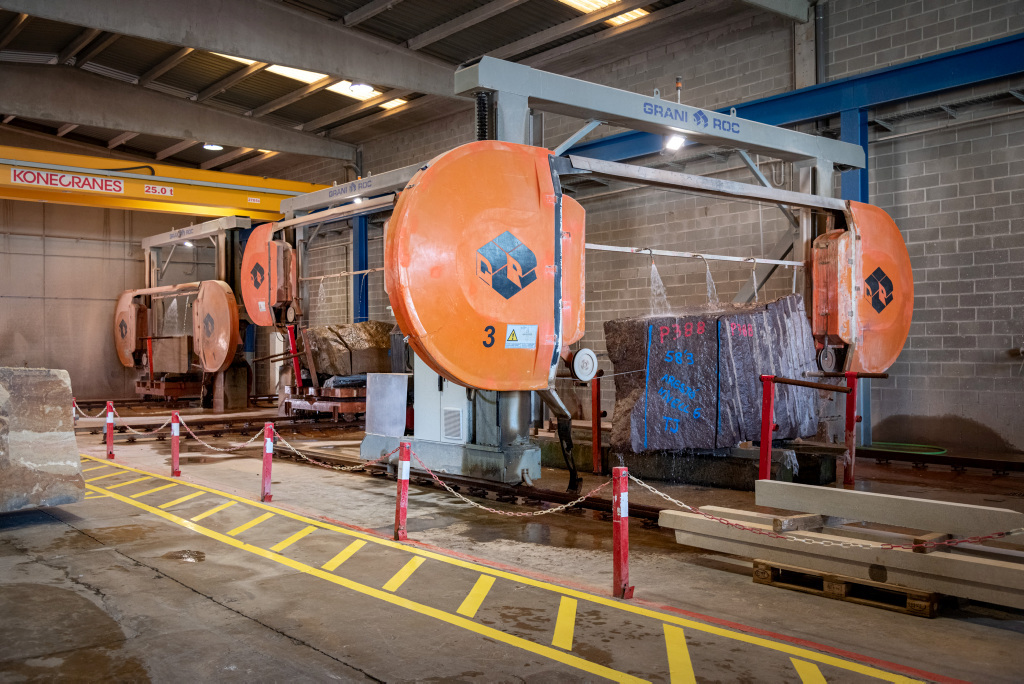 The first numerical control (NC) machine was designed in 1952, but it never actually worked. The actual use of NC appeared in 1971 in the automotive industry. There is no proof that NC methods were applied to architecture or the world of construction until the late 1980s.

In the Temple’s Technical Office, the majority of the pieces that had to be manufactured were designed on paper until 1990. Much of the output was manufactured right in the Stonemasons’ Workshop, and another major part of the drawings were used to craft three-dimensional plaster models, as well as life-sized models and moulds for the Model Makers’ Workshop.

The stone output always began with roughcasts until just a few centimetres from the final surface. Afterwards, this surface was hand-treated to achieve a specific final texture for each face or surface of the stone.

The painstaking study of Antoni Gaudí’s double-twist geometry conducted in the Office at that time, led by the architect Jordi Bonet, enabled this geometry to be transferred to the manufacturing machines. The fact that the forms to be reproduced had clear geometry, with specific formal rules, enabled and facilitated these forms to be described in the language of the manufacturing machines. In this way, through the language of numerical control, the parabolic path of each cut by the disk saw could be described, even before establishing direct communication between the computer drawing and the manufacturing machines. The introduction of geometry into computers increased the faithfulness of the shapes designed by Gaudí and yielded exact results.

Digital drawing was gradually added to the Office, and thus the major advantages of the new technology began to come into clear focus. By incorporating the possibilities of computer-aided design, the techniques for rendering the stone output made it possible to manufacture stone pieces from the Temple design by means of machines. The connection between digital drawing and machines, guided by a computer, brought precision that could not be reached manually while avoiding the slow, costly hand-preparation of the stone, roughcasting.

Furthermore, adjustments and corrections were costly, cumbersome tasks when working on paper. With this new technology, these jobs, which are essential in any process, were minimised and the precision of the outcome was ensured.

Nonetheless, the limitations of computers in that early IT age, the lack of power to handle too much data, the machines’ susceptibility to electrical surges and other issues should be borne in mind. 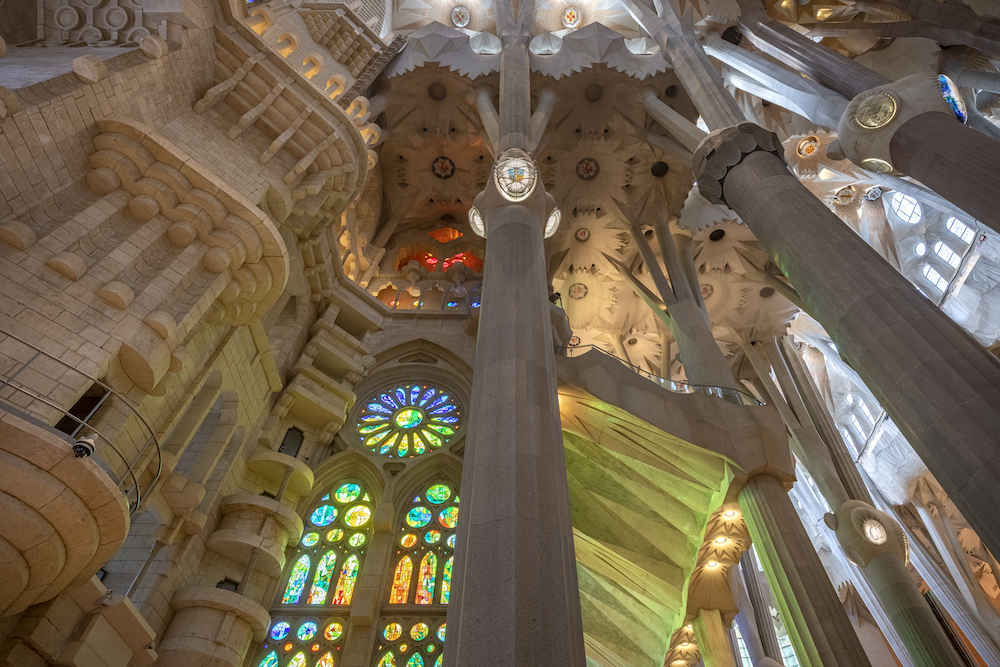 THE START OF CAM IN THE TEMPLE

In 1988, the Temple purchased numerical control equipment for the first time, the Van Voorden machine from Holland. It was a four-axel disk bridge saw with a built-in computer. It was in charge of the specific programming needed to manufacture the pieces within one column in the nave of the Basilica. In April 1989, the first tests got underway, and in 1991 all the granite pieces of the Lleida column were successfully manufactured with the complex double-twist geometry and an inner core of reinforced concrete. This is how the Lleida column became the first complete architectural element in which CAM technology was applied to the world of constructions. The fact that the Temple of the Sagrada Família was a pioneer in introducing CAM into architecture is a little-known historical fact, and for this reason in his doctoral thesis the architect Maruan C. Halabi claimed not only that the construction of this column marked a turning point in the construction of Gaudí’s Temple but also that it should be considered a pivotal point worldwide. In fact, much of the information provided in this article has been proven and sourced precisely from this thesis, which is entitled Los inicios de la aplicación de la tecnologia CAM en la arquitectura: La Sagrada Familia (The Start of the Application of CAM Technology in Architecture: The Sagrada Família). 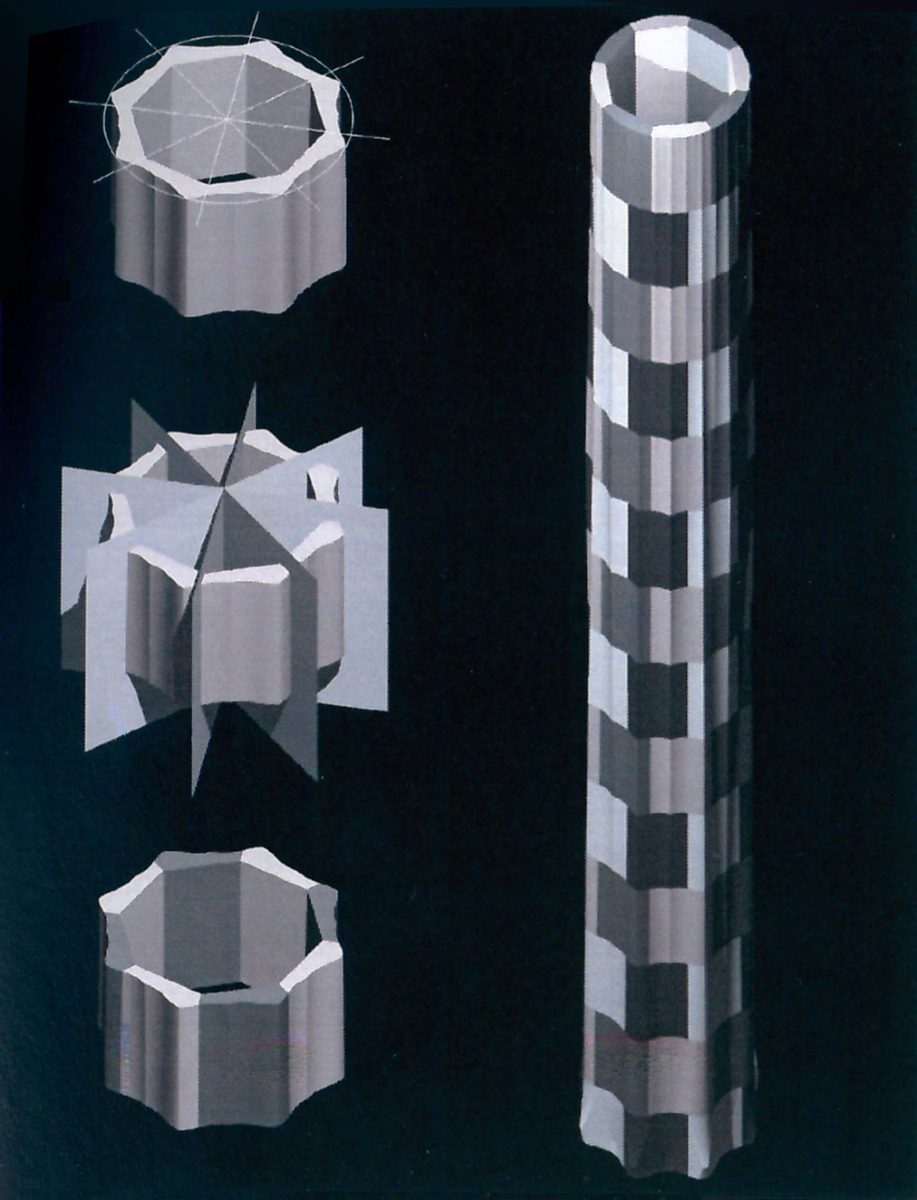 However, at that time it was not competitive to base all the manufacturing exclusively on CAM programmes, since a great deal of time was squandered during execution. Indeed, even though the complete element could be manufactured, from the deepest roughcasting to the final finish, the complete process of manufacturing a single element monopolised the machine and slowed production time too much. This is why a mixed system was devised, which allowed the finished surfaces to be numerically processed, while the coarsest roughcasting was sent to simpler machines. It was also essential to forge a balance between machine and manual labour. In any event, even though the optimisation processes of the output made major strides, such as by eliminating needlessly moving the tools, the first NC machine was an ideal instrument for building pieces with enormous geometric complexity.

It should be noted that in the early 1990s, the Technical Office was not yet organised into specialised departments (Design, Manufacturing and Construction), so the same team members were responsible for the entire manufacturing process: acquisition of the stone, roughcasting, preparation, execution with numerical control and quality control of the end product before installing it in situ.

When the intensive, constant pace of the 1990s was achieved with numerical control, three months were needed to completely manufacture an eight-pointed column. Currently, with technological improvements, the production time of the same column would have been trimmed to just three weeks. 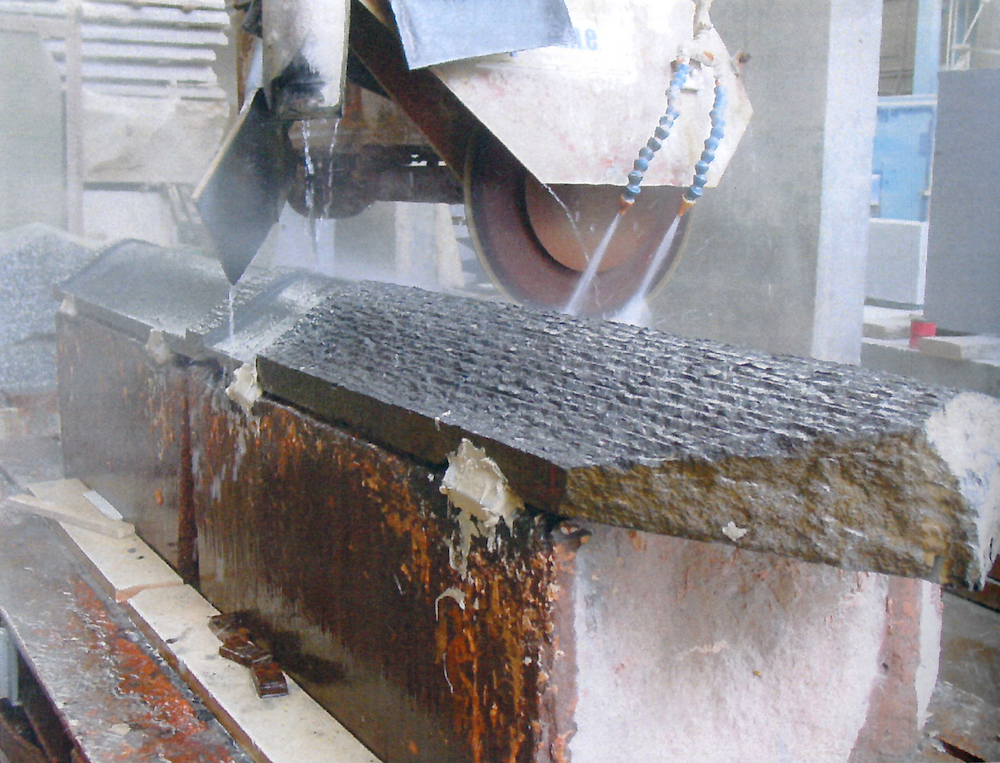 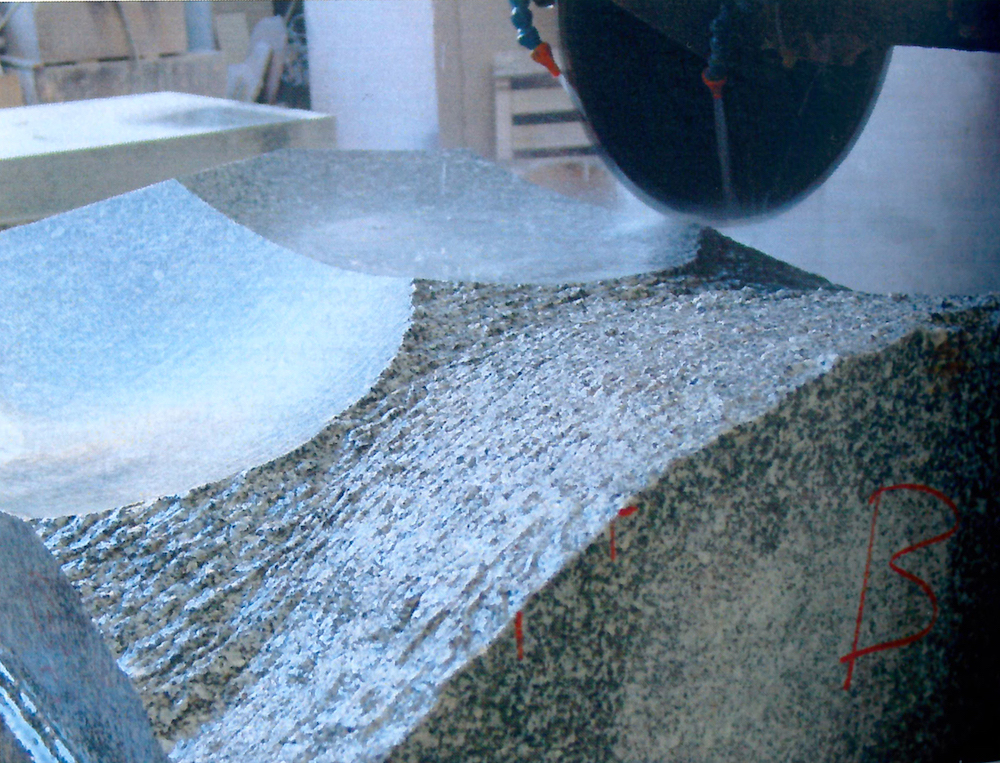 FUTURE IMPORTANCE OF THIS MILESTONE

Throughout the history of the construction of the Temple, there have been different stages which have brought an impetus to the site. In this case, technology has not only helped speed up production, but after being implemented in different areas, beginning with the Design and Construction departments and the Model Makers’ Workshop, it has helped us engage in a more in-depth study of Gaudí’s project and better understand its geometric shapes.

In this sense, the innovative act of starting robotization within construction at the time has been and continues to be newsworthy because of the new ways of working of the Office, Manufacturing and Construction departments. Today, technological tools are allowing Gaudí’s Temple to make quick, precise and more economical progress. The pathway taken in 1987 led us to make a technological leap from manual drawing to digital drawing and computer-aided manufacturing. Now we work with prototypes to ensure the most optimal solution, along with 3D printing, virtual reality glasses, photogrammetry, laser topography and scanners. The combination of computer and technological tools has enabled us to gain a global view of the entire construction process, from the design to the construction site, so the industrial processes can be tracked from beginning to end. 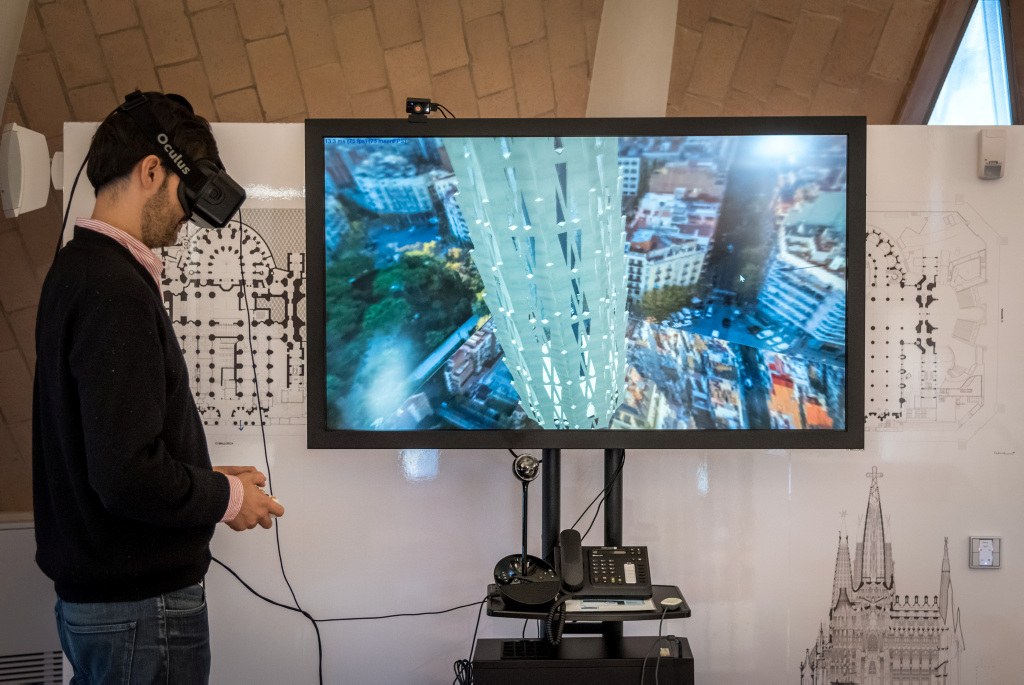 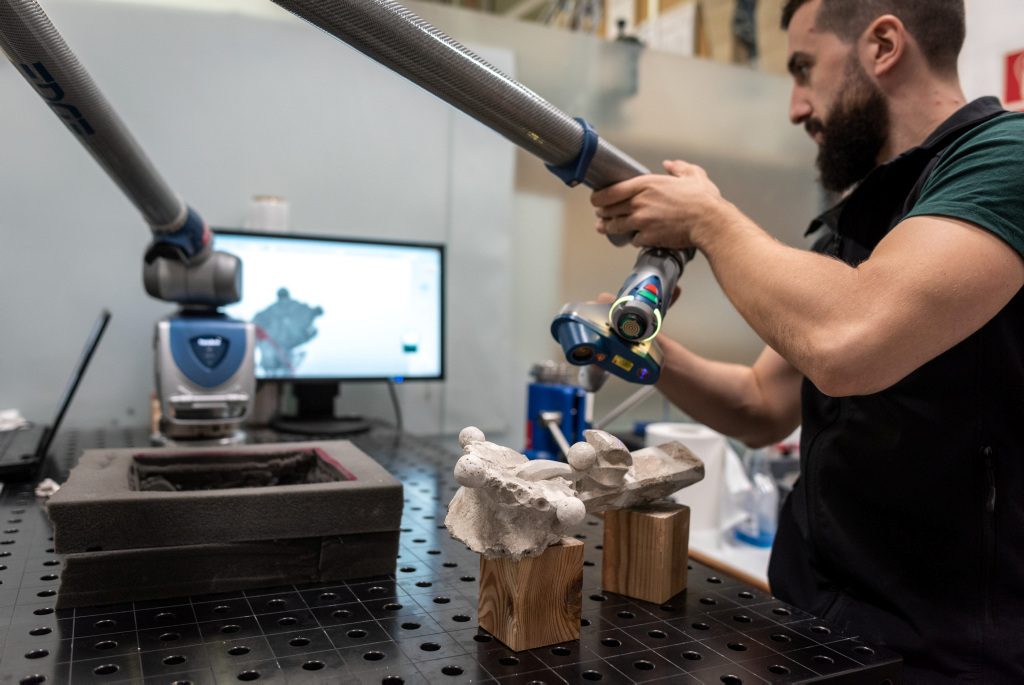 Even though it has meant working with tensioned stone, the building of the central towers is proof of how we seek optimisation by applying the most cutting-edge technology available at all times. We seek the best solutions for each challenge. Thus, the Temple continues to be a site of innovation, from design to construction, making cutting-edge technology compatible with the finishing touches of handcrafted textures and finishes.

Antoni Caminal i Homar
Degree in Technical Architecture from the Polytechnic University of Catalonia. He started working at the Sagrada Família in 1989 and was part of the Project section of the Technical Office until 2014. He is currently working in the Stone Production section of the Building and Technology Department.
At the Basilica, he is in charge of managing stone production and quality control for execution of a variety of architectural elements for the Temple.


Jaume Serrallonga
PhD in Architecture from the Polytechnic University of Catalonia with thesis entitled Geometry and mechanics in Gaudí's models. Member of the Sagrada Família Project Department. He has also taught at several universities.
At the Basilica, he has been in charge of the projects for the apse vaults and Passion sacristy, among others. After working on the great hyperboloid for the tower of the Virgin Mary, he is currently working on the project for the Glory façade.

The Sagrada Família: a Temple monitored 24 hours a day