In March, spring begins, the earth blooms and everything is reborn. At the Sagrada Família, Gaudí associated this beginning of life directly with the arrival of Jesus, but also with the beginning of the day, as the Nativity façade looks to the east. Each of the three portals on this façade is full of flora and fauna, filling them with naturalism chosen carefully and intentionally to reinforce the symbolic meaning of the various scenes.

In this article, we will go over some details of this burst of new life and joy that Gaudí wanted to immortalise in stone and that permanently reminds us of the beginning of the natural year.

The portal of Hope: the waters of the Nile

The scene of the flight into Egypt to prevent Jesus from dying in the massacre of innocents is what justifies the flora and fauna on the portal on the left side of the Nativity façade, the portal of Hope. This is why we see the typical reeds found on riverbanks, home to ducks and geese, the most aquatic of all the birds served at Christmas meals. Above the scene, there is a lotus flower, a plant that flowers in the water and is also known as the rose of the Nile. In the east, it is loaded with symbolic meaning associated with spiritual purity of the body and soul as it flowers so beautifully above muddy waters. The archivolt on the portal also features thalias, water lilies, calla lilies and papyrus. All of this aquatic nature, along with the dragonflies dotted in between, clearly show Gaudí’s intentions for this portal. 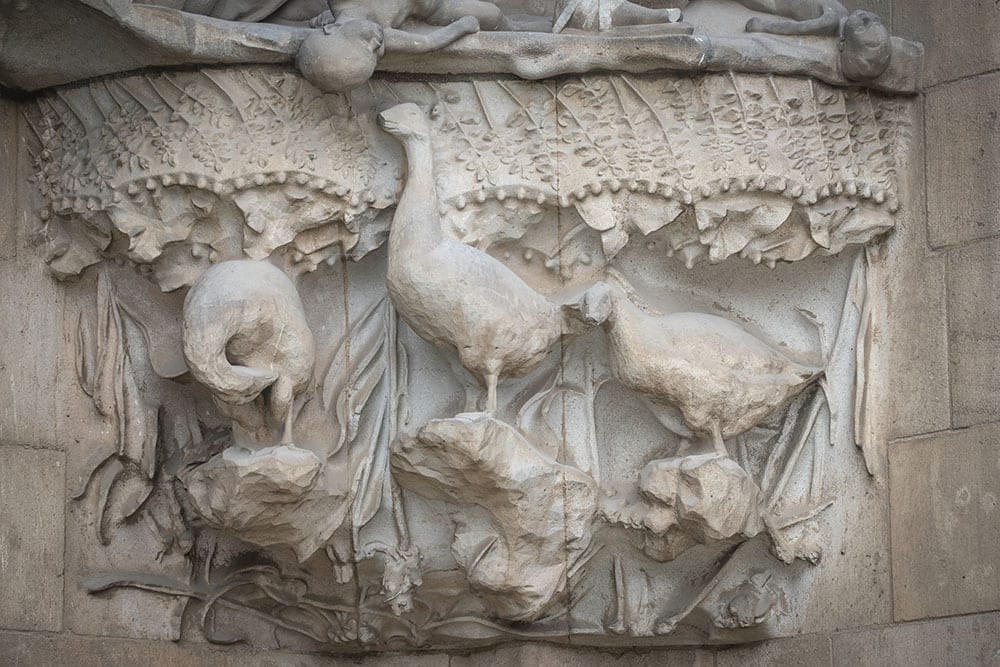 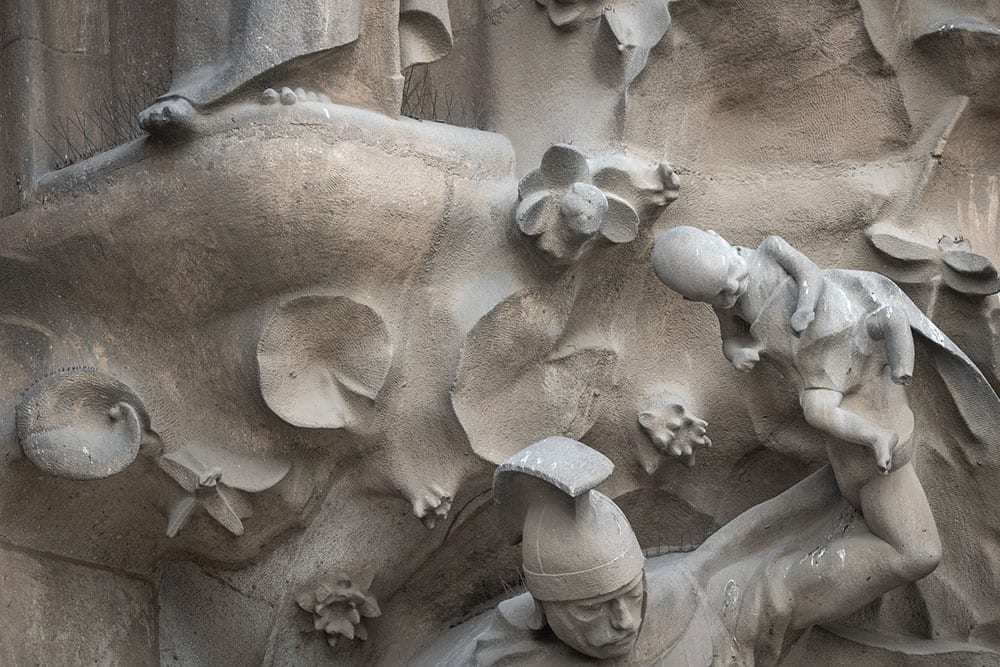 The portal of Faith: dry vegetation

On the other side, meaning the right side of the Nativity façade, we find the portal of Faith, for which Gaudí used the opposite type of plants. These are from the desert, the most arid area of Nazareth, where Jesus spent his childhood and teenage years. The animals we see just below here are hens and roosters.

The side niches have century plants, with long, hard leaves with spiky sides and a pointed end reminiscent of arid dry-farming. In contrast, on the threshold of the portal we find violets, a fragile plant that reinforces the symbolism of Mary’s humility, as well as that of Jesus, who humbled himself in becoming man and working like man does.

Furthermore, on one end there is a bee, as a symbol of daily toils, next to the chameleon that acts as a gargoyle and looks like it may swallow the insect any moment. Here there is also a flowering, leafy apple tree filling the archivolt, with fruit hanging between the leaves. This sacred tree, from the book of Genesis and packed with symbolism ever since, reminds us of the beginning of sin, representing the redemption of humankind. Here, near Jesus preaching to the doctors and masters of law, it becomes a symbol of wisdom and freedom of choice. 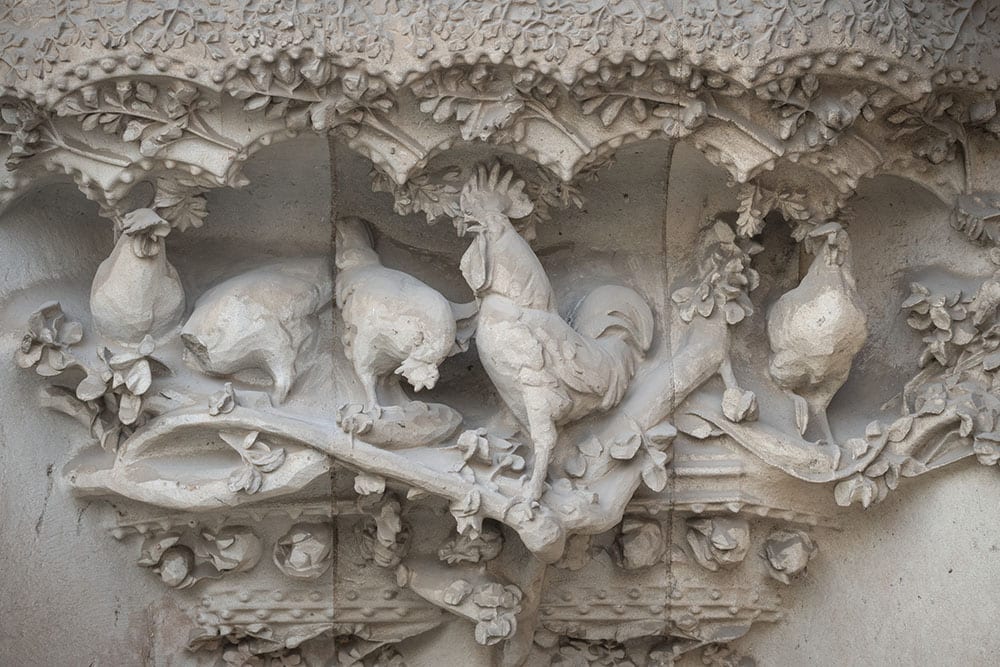 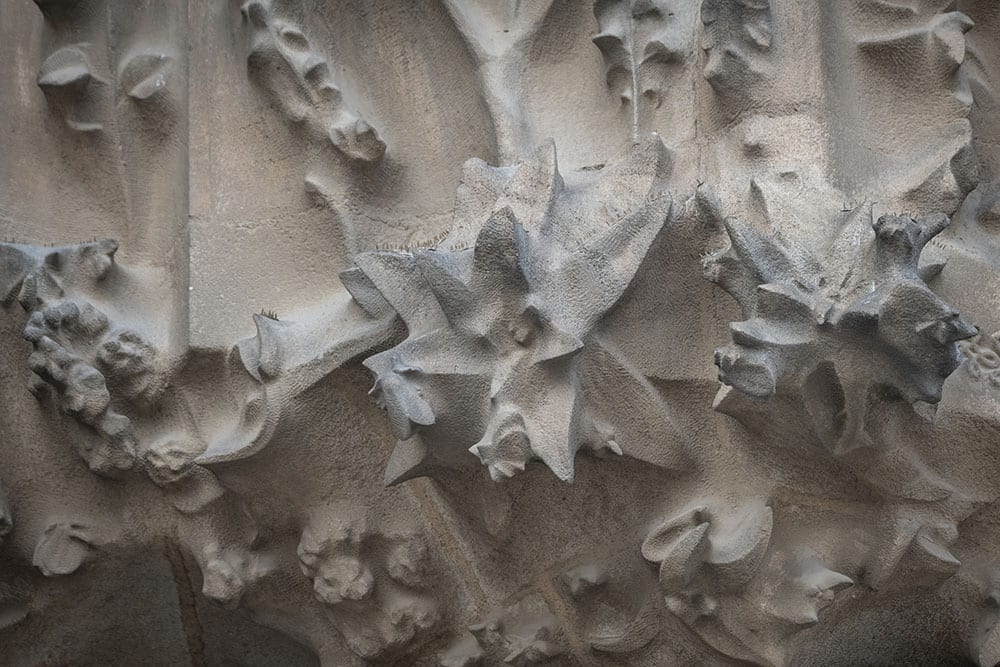 The portal of Charity: the central crèche

The central portal, the portal of Charity, under both the Wise Men and the shepherds on the other side, we can see some turkeys with their chicks, sheltering under a frieze of ferns. These are the most luxurious birds served at Christmas meals. On the side of the shepherds, there are white lilies and on the side of the wise men, irises. Both are full of symbolism because they represent the purity of Mary. The latter, furthermore, with a name that, in many languages, is associated with the rainbow (arc iris) because it flowers in so many different colours. 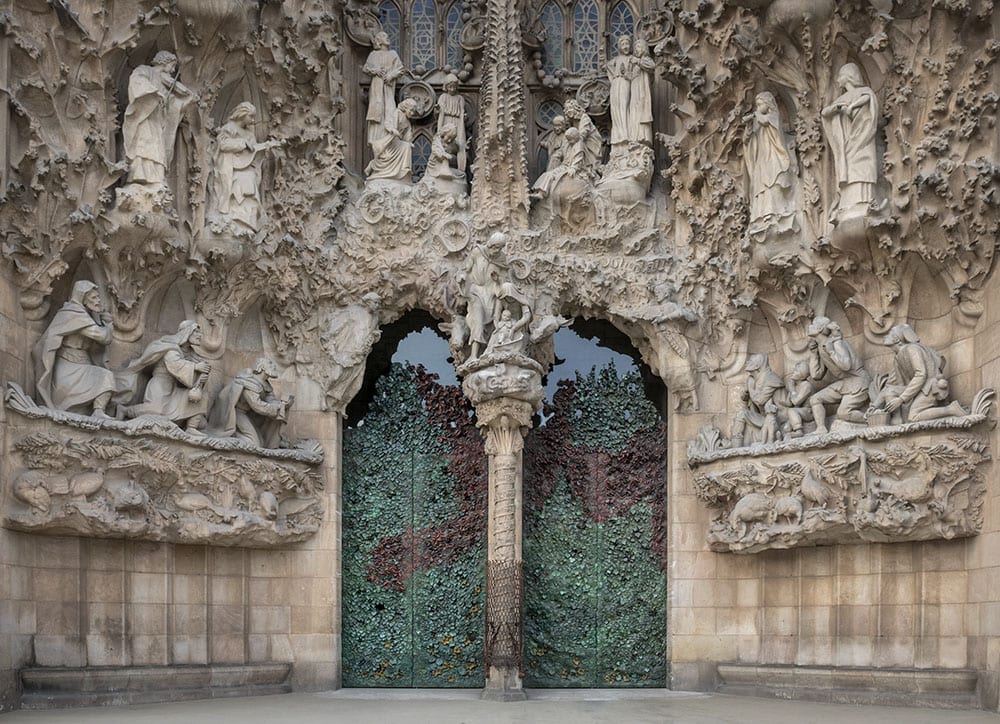 The side columns of the portal are palm trunks topped with leaves on which the trumpeting angles are perched, and the central column supports the main nativity scene. This central column is a trunk engraved with a winding ribbon with Jesus’ genealogy from Abraham and, at the base, we can see a snake coiled up to bite and holding the forbidden fruit in its mouth, here shown behind a wrought-iron gate.

On the threshold there are cherry, peach and olive branches, the latter a reference to the word Pax in the text of the Glory the angels sing, which can be seen, written in Latin, between the birds and plants. On top of all this exuberance, on the archivolt there are branches of almond, wisteria, tuberose and gladiolus, and many of the birds described in the popular Christmas carol El cant del ocells. So, in addition to sparrows, nightingales and hoopes, we also find an owl on the balcony where, in Gaudí’s time, a real one used to sit, and a squirrel scrambling up the almond tree in front of the angel playing the dulzaina. 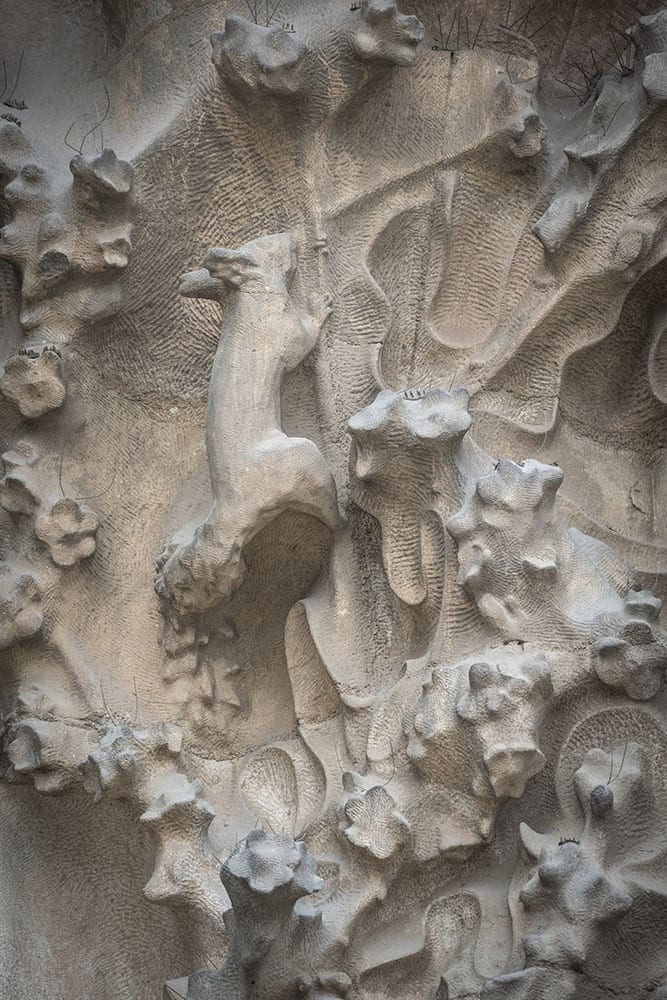 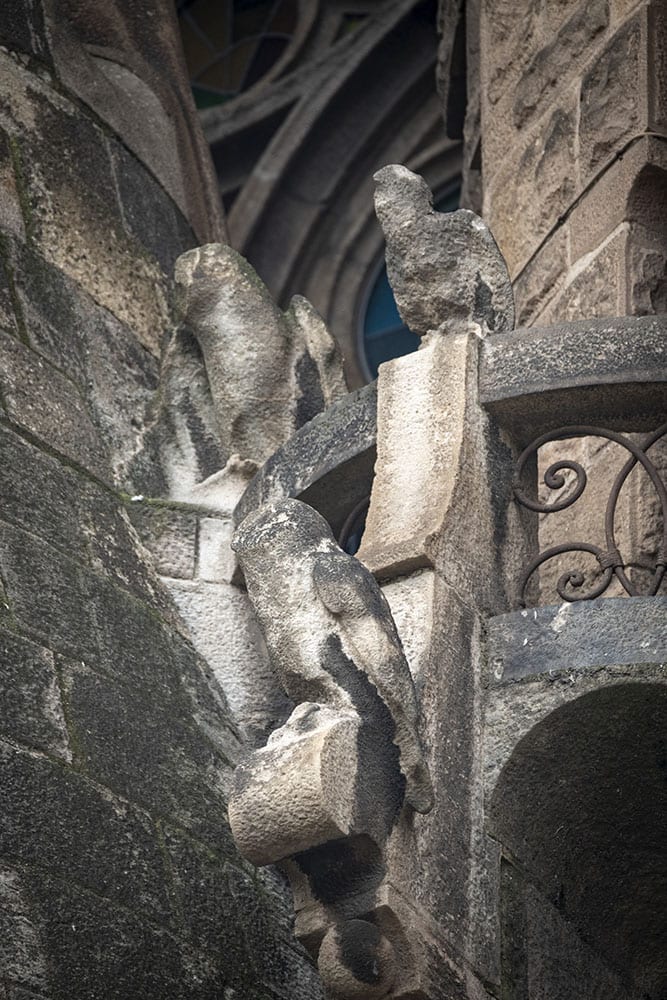 Although most visitors will find it hard to see all of these animals and plants, as Gaudí blended the sculpture so completely into the architecture, as if a sheet covered it all, those who know and admire botany and birds have been able to pick out what the old texts describing the works already explained was there.

So, we encourage you to discover all of these details of the flowering, spring-like Nativity façade!