Like most historical buildings in Barcelona, the Basilica of the Sagrada Família was originally designed to be built mostly with the most suitable stone available, in terms of proximity, strength and resistance to weathering. Chosen, in other words, for its durability. And all of these requirements were met by what is known as Montjuïc stone, as the outcroppings that have made it possible to quarry, for more than 2,000 years, are only found on the mountain of Montjuïc.

THE ONLY SEDIMENTARY ROCK OF ITS KIND IN OUR COUNTRY

Montjuïc stone is a type of sandstone. There are many sorts of sandstone from Catalonia available on the market, but Montjuïc stone is a siliceous sandstone. This means that most of the grains in it, as a sedimentary rock, are quartz, which is a silica mineral, as is the cement that binds them together. This characteristic makes it much more durable than the sandstone found in the rest of Catalonia, which doesn’t have such a high concentration of silica in the quartz grains or the cement, as they are mainly calcitic.

Furthermore, another very important characteristic of Montjuïc stone is its chromatic variability, as it is found in a wide range of colours. So, there are stones that range in colour from whites to greys, reds, pinks, beiges and even blues.

Unfortunately, however, as the last quarries on Montjuïc closed in the 1970s, the Basilica can only continue to use this stone when it can be rescued from other buildings that are being torn down or from small stocks held by various companies and institutions for architectural restoration works.

THE SEARCH FOR A SIMILAR STONE…

This, therefore, is why we began using other stones in place of those from Montjuïc for the various stages of construction of the Basilica. This has led to an ongoing search for new stones that can reproduce the colour, texture, workability, chemical and mineral composition, mechanical properties and durability of the Montjuïc stone as much as possible.

In addition to all of these characteristics, the new stones must also meet the quarry supply requirements, as a huge volume of stone is needed to build the Basilica and it would be useless to find one just like Montjuïc stone if there isn’t enough of it to meet our needs. This has been one of the bottlenecks that has often affected us most, and one of the ways we’ve been able to resolve the issue has been by incorporating a wide range of toasted fine-grain granites, as chemically and aesthetically they are nearly identical to Montjuïc stone, even if they differ from a genetic standpoint. 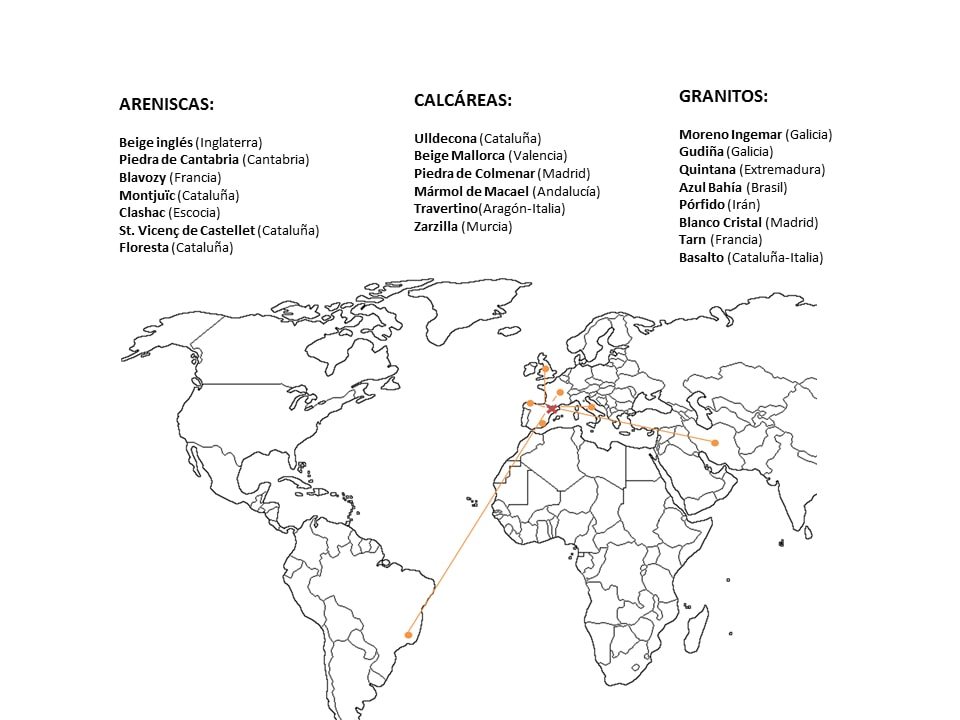 The search, in Catalonia, Spain, Europe and abroad, has yielded fruit and, so far, the stones used in place of that from Montjuïc are:

The last four are the types of stone we are using the most now.

This ongoing search for new stones is still under way today, as the fast pace of construction sets a highly demanding target both in volume and quality of the stone needed. Therefore, we have to find new suppliers to meet these needs and avoid any issues that would make the stone unavailable, such as quarries running out of stone, decreasing quality or companies going bankrupt. 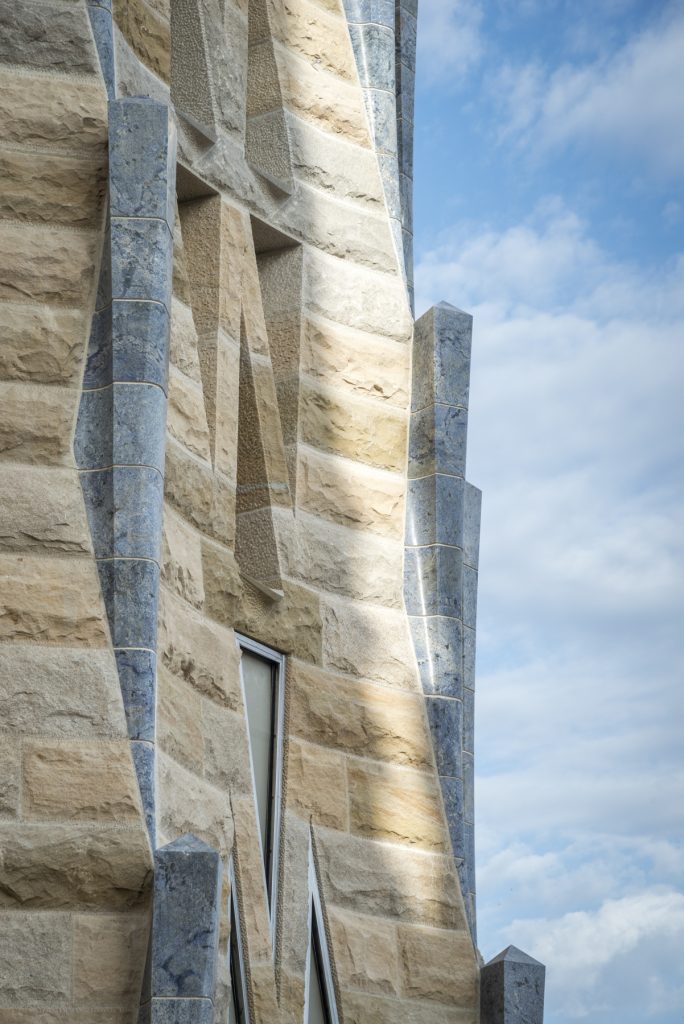 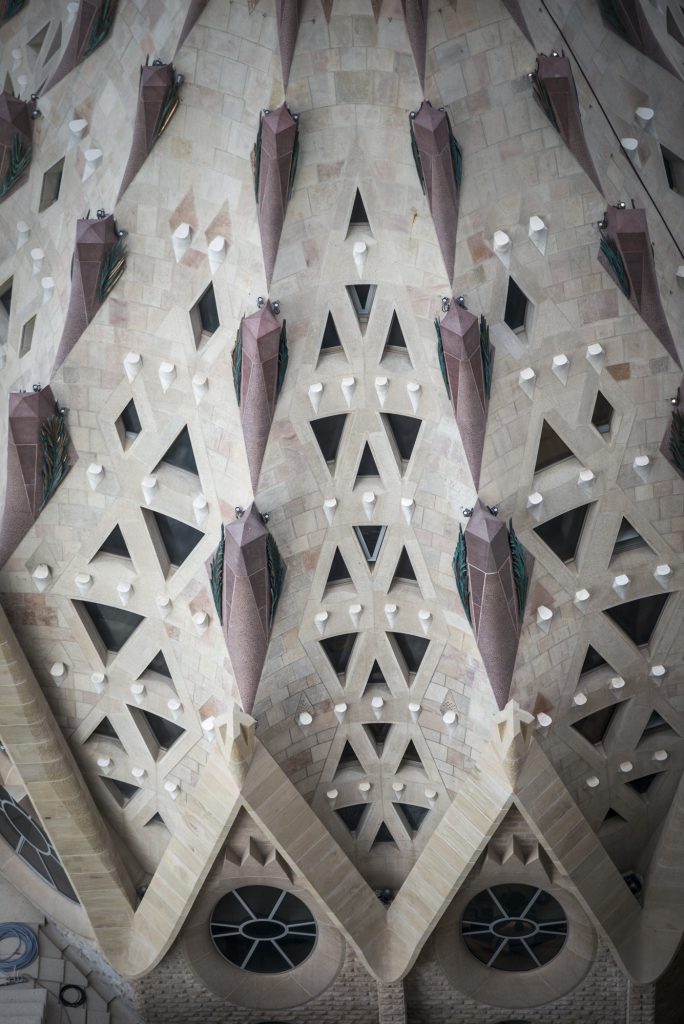 … AND OTHER, MORE UNIQUE ONES

In addition to the Montjuïc stone and its replacements for the main structural elements of the Basilica, there is also a whole series of stones with very specific characteristics that meet highly specific aesthetic, structural or regulatory needs, which must also be sourced from around the world. Here are some examples:

Plus, we also use a wide range of granite from Extremadura (Quintana); Galicia (Silvestre Moreno and Vilachá); Catalonia (Ull de Serp); Brazil (Itaunas and Himalaya) and France (Tarn). All of these are used for their hardness and strength in the columns, flooring, stairs and pediments.

Finally, there is a third type of stone used to a lesser extent, mainly inside or in protected areas of the Basilica. As they are not exposed to the weather, the requirements in terms of mechanical traits and durability are much lower than the previous groups, and they also have other aesthetic qualities for each use. In this case, we have the following stones: 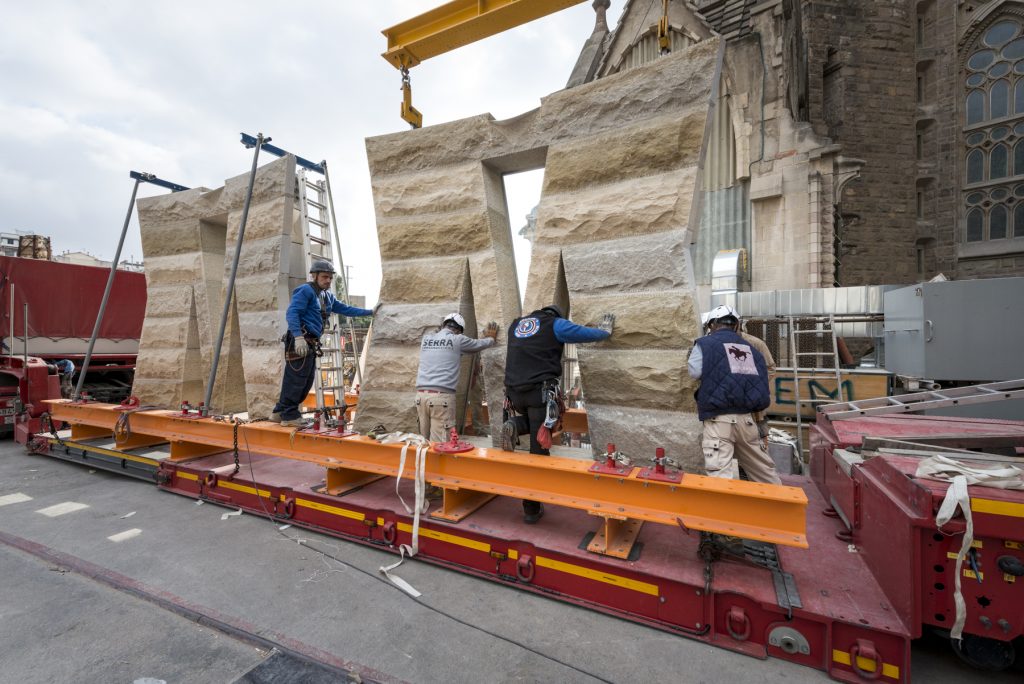 In total, some fifty different types of stone have been used to build the Basilica so far. And this is in no way a definitive number, as we are always working to incorporate new types of stone to complement the ones we are using now or fill new needs and for new spaces.