At the Sagrada Família, Gaudí designed six central towers and dedicated four of them to the Evangelists, the men who told the story of Jesus’ life. In recent months, these towers have grown to 103.56 metres tall, and since last June up to ninth of thirteen levels they will eventually have can be seen. The towers of the Evangelists will be featured in the Open Doors which the Sagrada Família will be celebrating this year from 20 to 23 September, and they will also be the centrepiece of the blog articles this month with the goal of sharing all the details of their design, structure, construction and symbolism.

The towers of the Evangelists are located on each of the four corners of the central square of the Temple’s crossing, measuring 15 x 15 metres, occupying almost an entire module measuring 7.5 x 7.5 metres which explains many other measurements of the building. Even though their location lead them to be classified as lanterns, they are actually quite small, which means that they are proportionally more slender than the two main lanterns, which depict Jesus Christ and the Virgin Mary and have more dome-like shapes. Also, these lanterns contain the staircases and lifts that lead to the interior of the tower of Jesus Christ, and therefore to the tallest parts of the Temple. 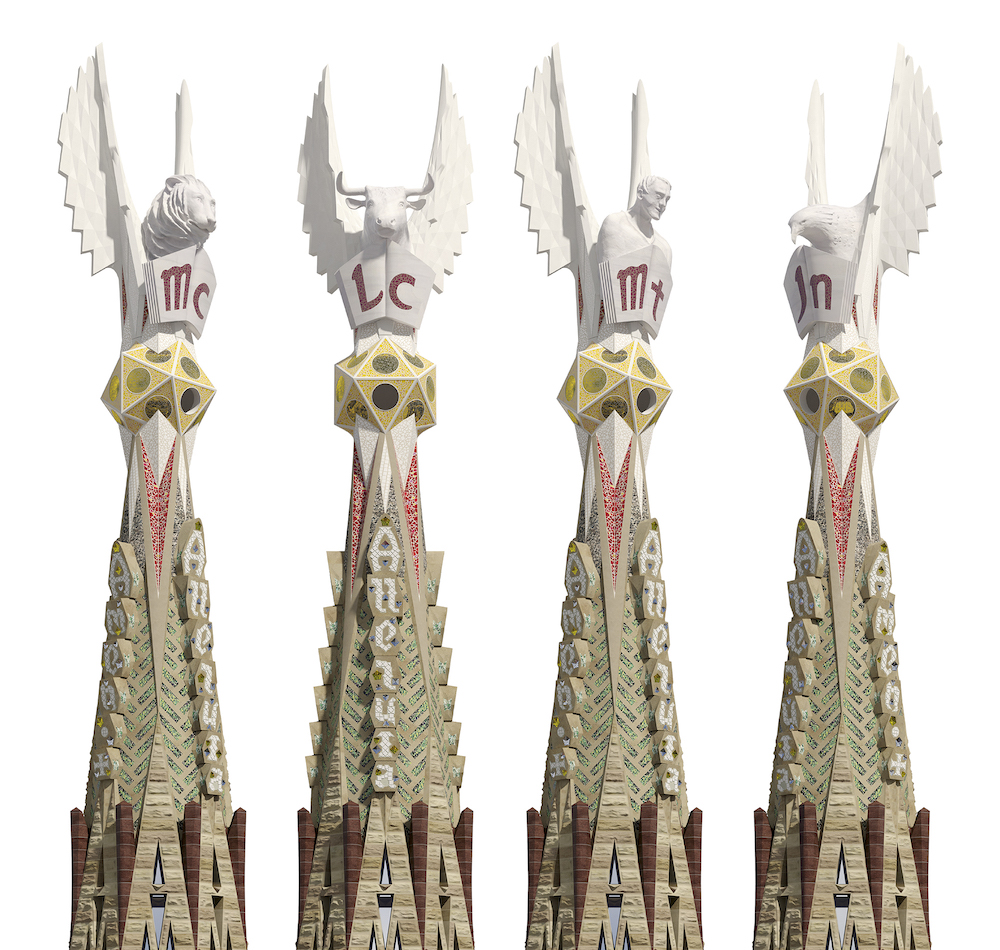 THREE DISTINGUISHABLE PARTS OF EACH TOWER…

The towers of the Evangelists will be 135 metres tall once they are finished, and the third tallest in the Temple. Formally, they can be divided into three parts. The first one starts at a height of 45 metres and is attached to the building, so it is considered the base of the tower. It is totally vertical and reaches up to 74.27 metres tall. This part has elongated openings which afford views of the city. From the outside, the staircase upward can be seen by the stone bannisters, which trace and reveal their helicoidal shape. The form of these bannisters comes from the model that Gaudí left done in the Barnabas bell tower.

This first part ends with a transitional crown, which includes elements in coloured trencadís mosaics of glass and decorative fleurons made in the image and likeness of the ones that exist on the bell towers on the Nativity and Passion façades. They serve to separate this part from the tower proper, which is separated from the building from here on up. This second part of the tower runs along the next 36 metres, and the connection leading to the central lantern of Jesus Christ is at a height of 84 metres.

Just like the remaining central lanterns, the towers of the Evangelists are made with panels of tensioned stone. They have a total of thirteen levels of panels placed from the height of 76.62 metres until 112.49 metres; the last level is made of special panels which were added at the pinnacles.

The pinnacles are actually the topmost part of the towers, and they are 22.5 metres tall, approximately as tall as a five-storey building in Barcelona. Their design is similar to the pinnacles of the bell towers on the façades because they share elements, such as the praises engraved into stone hexagons or the polyhedron; furthermore, this design is generated based on the geometry that Gaudí used towards the end of his life, primarily hyperboloids and paraboloids. The pinnacles of the Evangelists also have three parts: on the lower part are the hexagonal coats-of-arms with the Amen and Alleluia praises; above them is an icosahedron with the light beams that will illuminate the Cross; and, on the tip of the tower, is the tetramorph with the book and wings. Christian iconography has used these figures for centuries to depict the Evangelists: a man or angel, a lion, a bull and an eagle. 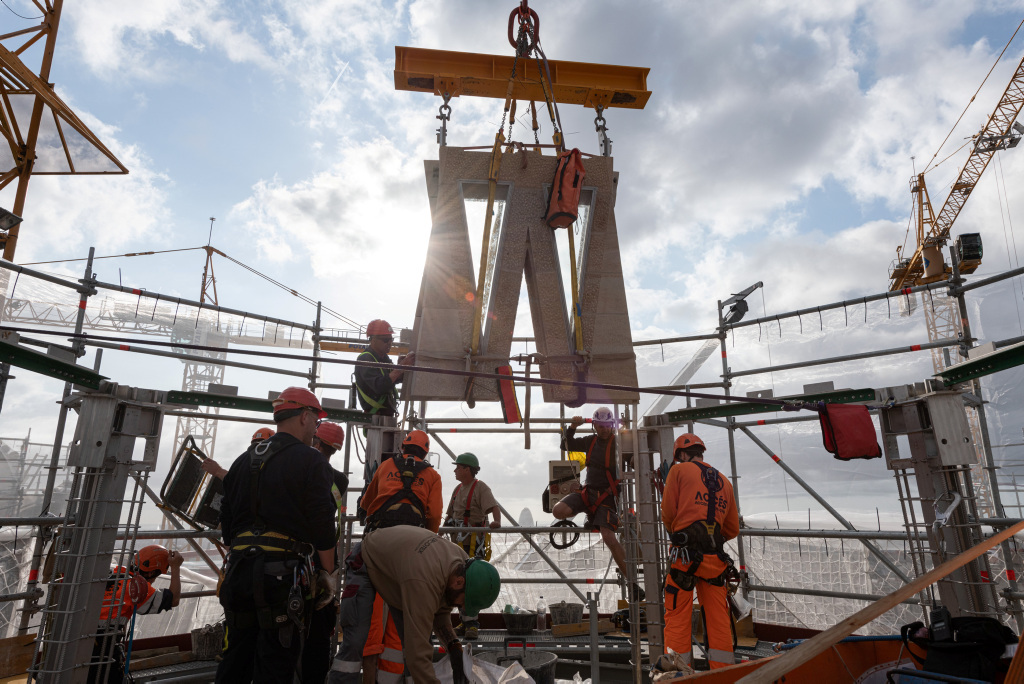 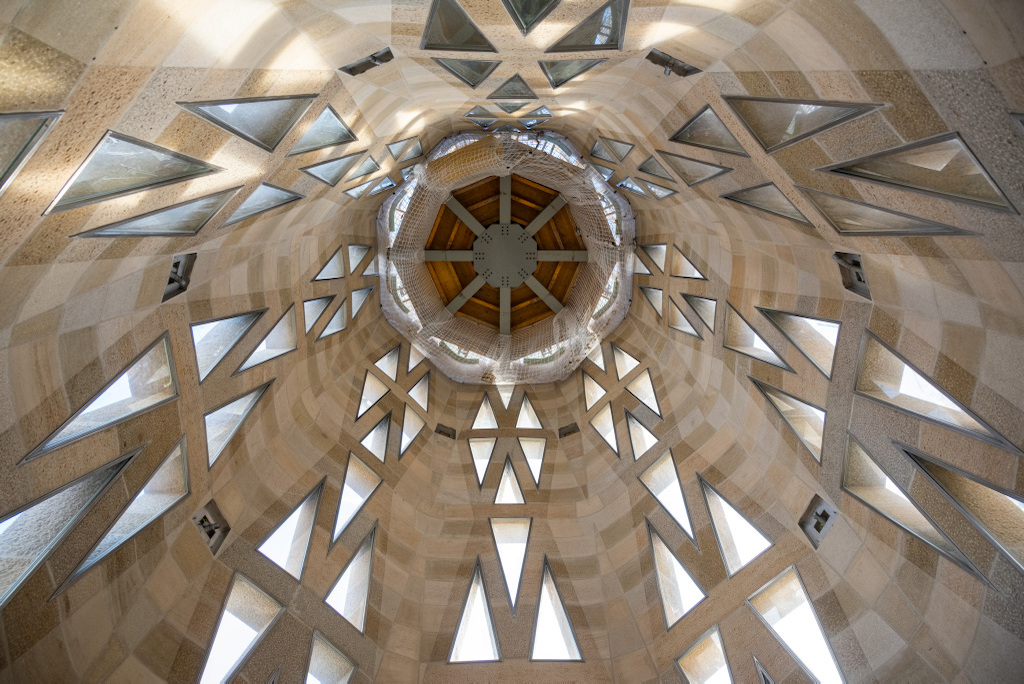 … AND OTHER DIFFERENCES AMONG THE FOUR TOWERS

In addition to the obvious differences that each pinnacle will have because of the figure of the tetramorph each one will bear, there are also other clear differences among the four towers of the Evangelists.

On the one hand, we have the towers that are part of the route to reach the central lantern, namely the towers of Evangelists Luke and Mark on the side facing the mountain, and which are equipped with a lift for this reason.

In contrast, the towers of John and Matthew, on the side facing the sea, will only have evacuation staircases, so their interior will be more spacious and maintenance operations easier.