Gaudí laid out most of the theological programme for the Temple, which artists have been commissioned to carry out with their own creativity ever since. However, in order to give their work the right expressiveness and make sure all the pieces fit together, it is important for the artists to have a deep understanding of the meaning behind their representations and the general characteristics of the project as a whole. So, in 2016, the Temple’s Board of Trustees decided to set up a Theology Committee and an Art Committee to provide guidance for both Foundation members and the team of architects and artists in their decision-making process. In this post, we’ll look at the members of these committees and their functions.

The Theology Committee is made up of theologians Dr Armand Puig, rector of Ateneu Sant Pacià and author of books on the symbolism of the Sagrada Família who has been advising the architects on topics related to symbolism for years; Joan Galtés, current provicar general for the Archdiocese of Barcelona; and Dr Francesc Torralba, professor at Ramon Llull University, member of the Royal European Academy of Doctors and adviser to the Pontifical Council for Culture. All three study and interpret Antoni Gaudí’s proposals from his original documents and the architect’s demands, to explain the theological meaning and significance, while also assessing them based on current situations and knowledge. For example, on the Glory façade, they have delved deeper into Gaudí’s programme and interpreted how heaven and hell should be represented today. Plus, for some parts of the building or architectural elements, Gaudí’s plan has to be expanded or fleshed out with proposals that are theologically sound and also fit in with the overall meaning of the project to create a harmonious whole. In these cases, the Theology Committee is also in charge of this task.

For its part, the Art Committee is made up of five art critics and historians: Daniel Giralt-Miracle, art, design and architecture historian and critic who specialises in Gaudí and had already advised the Board of Trustees and architects on artistic matters for several years; Josep Bracons, art historian and professor of fine art and design; Sílvia Muñoz d’Imbert, historian, art critic and curator; Bernat Puigdollers, art historian, critic and curator and member of the management team at the Museum of Montserrat; and Maria Garganté, art historian and anthropologist specialising in Baroque art and heritage and a professor at the Autonomous University of Barcelona and the Facultat Antoni Gaudí. In this case, the architects explain the project to the Committee and, together, they study the general characteristics the art should have, taking into account the meaning it is meant to convey and how it fits into the surrounding architecture. One of this Committee’s most important responsibilities, in fact, is to propose a selection of artists that suit each task for the architects and Board of Trustees to choose from. In this task, they take into account the general characteristics of the artwork, from materials to techniques, expressiveness and size. 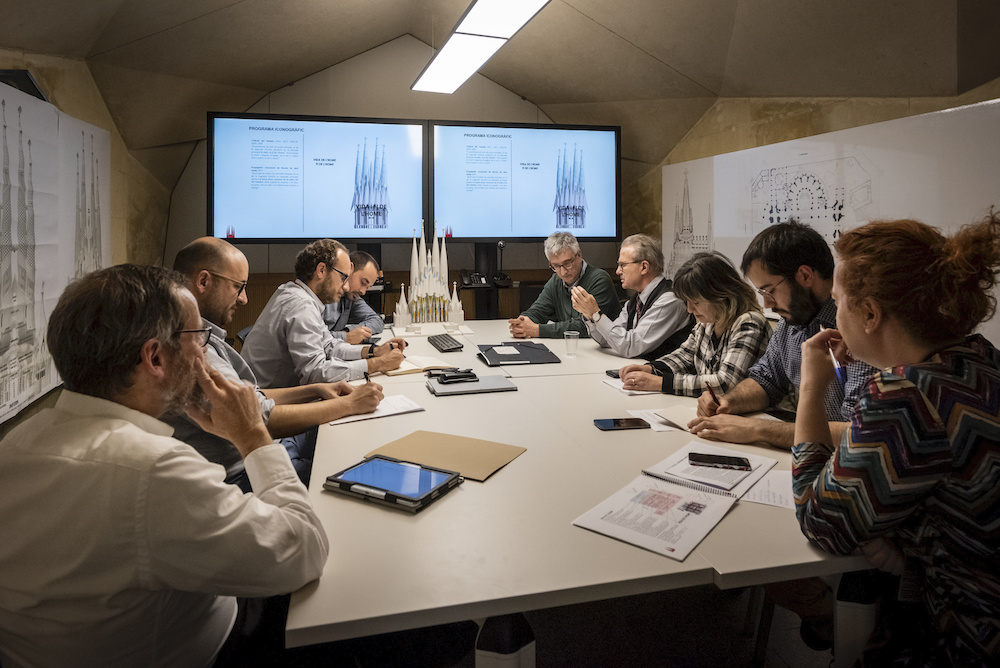 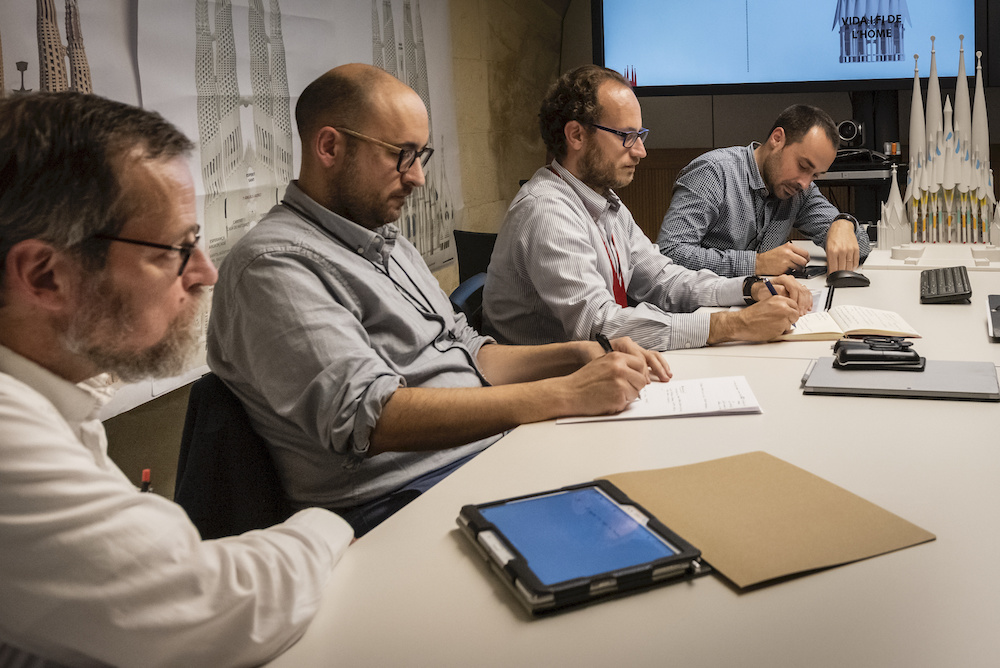 Both committees meet regularly with the team of architects to properly interpret the religious and theological content and meaning, in the case of the Theology Committee, and to find the right artistic expression and propose artists to carry it out, in the case of the Art Committee. Additionally, when necessary, they hold joint meeting so the theologians can explain the theological meaning of the ideas that must be conveyed through the artwork to the members of the Art Committee.

So, when starting work on a part or element, the team of architects explains the architectural project to the two committees, based on original information from Antoni Gaudí, focusing both on architecture and meaning. Then, the artist has to imbue the work with their own meaning and iconography, while also integrating the piece into the project as a whole and with the general artistic intentions, for example in terms of size, adapting to the architecture, material or general expressiveness. During the process of making the artwork, the architects, with support from the theologians and art experts, are in regular contact with the artists to help them integrate the piece properly into the architectural work.

Currently, the architects and the two committees, commissioned by the Board of Trustees, are working on several projects to prepare an invitation-only call for proposals for the artwork for the Glory façade. On the one hand, the architects are preparing the preliminary project for the façade based on original information from Gaudí: the model, floor plans and written descriptions; and, on the other hand, the Theology Committee has drafted the theology plan for the façade based on its interpretation of Gaudí’s proposal, which will soon be presented to the Board of Trustees, while the Art Committee is preparing the rules for the call for proposals and choosing the artists who will be invited to participate, which must be approved by the Board of Trustees. 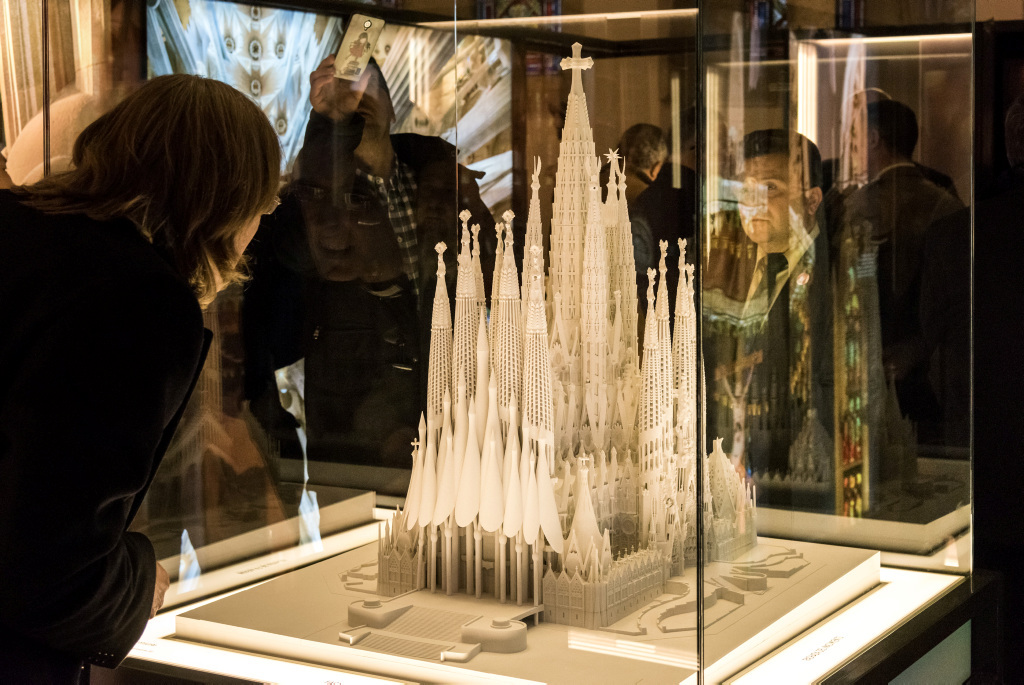 The committees’ work, therefore, is essential to understand the information from Gaudí’s original project and to interpret it according to more current criteria, in terms of both the theological content and the artwork.