At the Sagrada Família, there are many spaces and details that visitors can’t often see, whether because they are very high up and far from the street, or because they are hidden or in areas only accessible to authorised personnel. This is the case of the loges behind the sculpture groups on the Nativity façade. In this post, we want to look at one of the largest and most unique: the one behind the group of the Coronation of the Virgin Mary, which is on top of the central portal on this façade. Gaudí filled it with details, unknown to most, but of great value. In fact, some people would ask him why he put so much effort into details that aren’t visible from the street and he would say that people might not be able to see them but God, who sees all, can. Now, however, everyone can get a virtual view of this space thanks to the 360-degree shot below:

This exterior loge is the central nexus of three loges on this level of the façade and it is much larger and more spacious than one might imagine. The floor is done in stone, with pieces similar to roof tiles that draw out any rainwater. The space is partially covered, with a series of catenary arches decorated with palm fronds. Looking up, you can sense the verticality of this interior space, which is enclosed by a stone vault located just below the great cypress tree that culminates the triangular pediment on the main portal.

The sculptures are right on the threshold of this great arch of palm fronds that covers them and, therefore, are a bit exposed. They are roughly 20 metres off the ground and show the figure of Christ just before he puts a crown on his mother’s lowered head. From behind, we can see the back of the throne where she sits, finished with two huge spheres. On either side, the witnesses to the scene: Saint Joseph on one side and a shepherd from the crèche on the other, representing the Holy Family’s first friends, the humblest of people. As a final detail, we would like to mention that, through the opening on the right, you can also see one of the many birds found on this façade: a pelican. 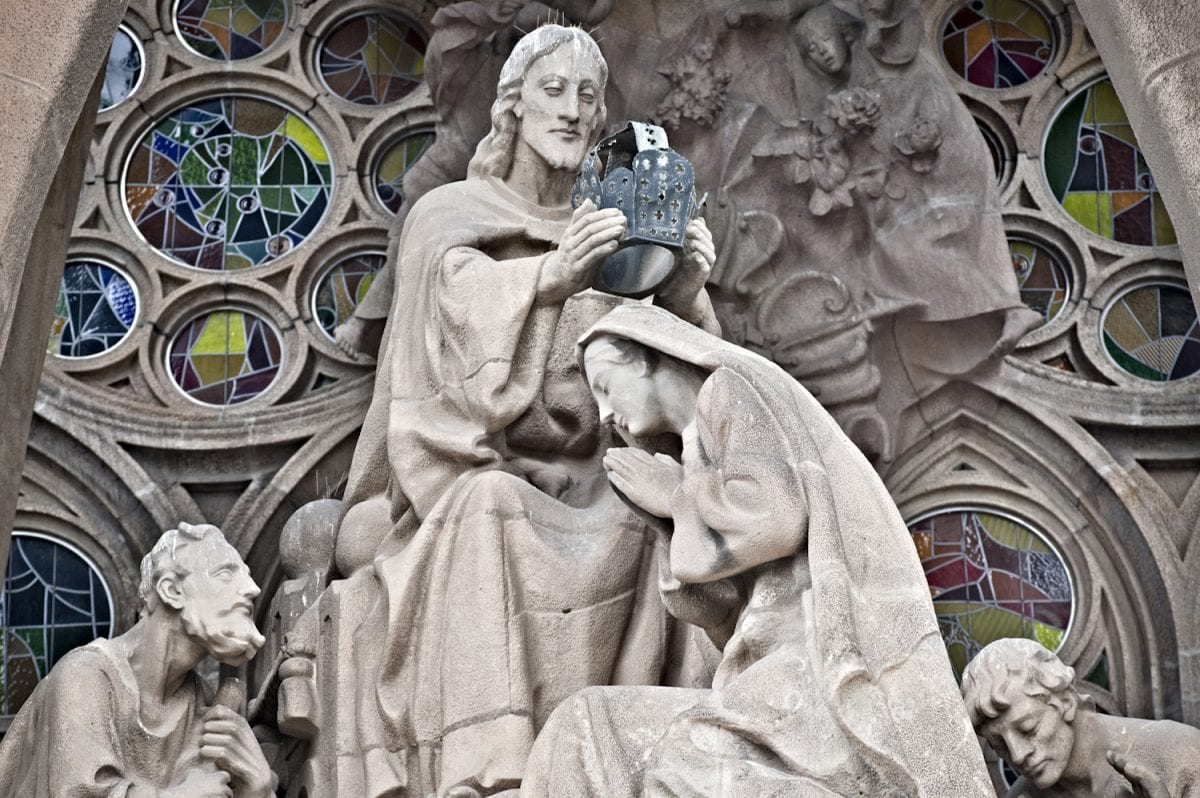 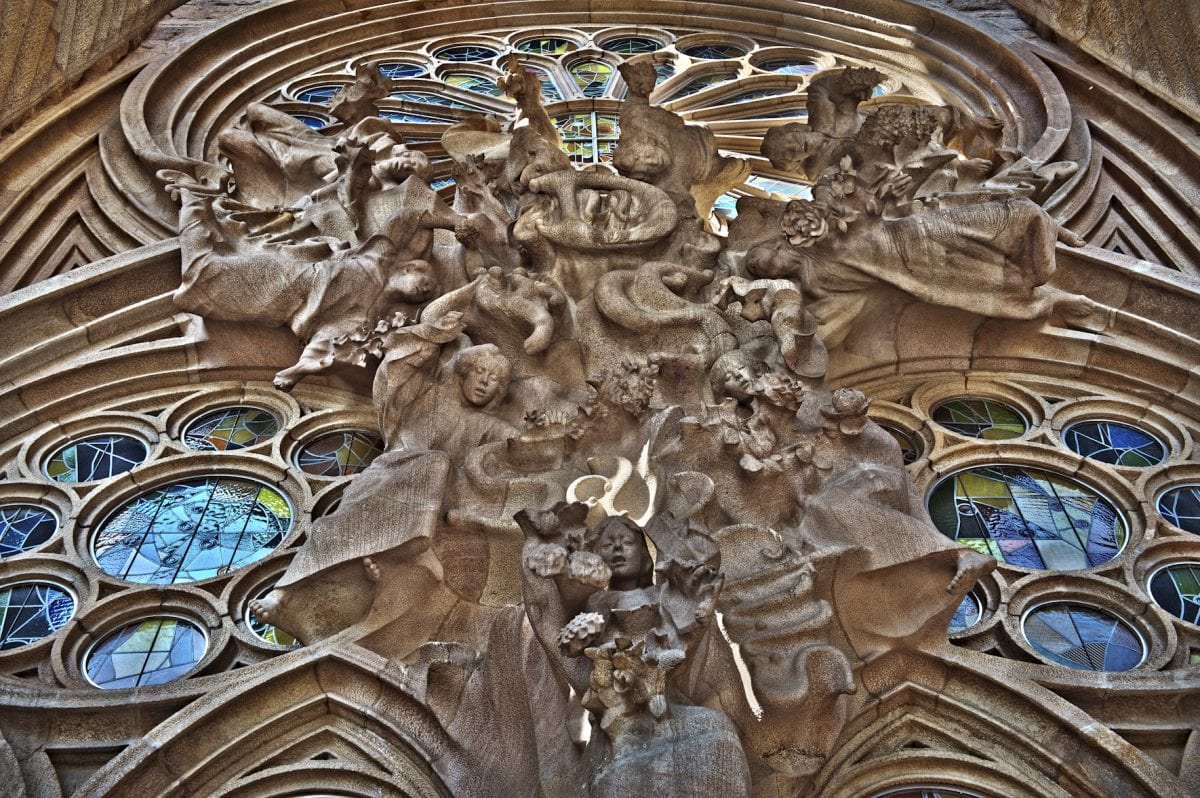 FROM SCULPTURES TO SYMBOLISM

Nevertheless, the greatest treasure to discover in this unique space is the magnificent sculptural work and symbolism on the window on its outer wall. This cannot be seen well from the street or from inside the Temple, where there is little sign it even exists. It is only from this loge that it can be seen properly and that we realise the sculptural group is suspended in the air, attached only by the thin mouldings around the rose windows, so it looks like it is hovering. This intentional anti-gravity effect Gaudí created goes perfectly with the heavenly scene represented in this group of angels.

Like the rest of the Temple, this window also has a symbolic meaning. It is dedicated to the Holy Trinity, and this can be seen in the signs Gaudí added. To start off, in the centre we find the word for God in Latin (Deus), with a capital D at the beginning. The three initials of the words that make up the Holy Trinity are laid out in a triangle: the P for the father (Pater in Latin) is on top; to the left, F for the son (Filio in Latin); and to the right, the letters SS for the Latin term Spiritu Sancto, or the Holy Spirit. This is why this group also shows the symbol of Saint Athanasius, the Quicumque Vult, which has been part of the Christian liturgy since the Middle Ages, especially on Trinity Sunday. It is a sort of creed explaining the significance of the Trinity and takes its name from the opening words of the prayer in Latin: “Quicumque vult salvus esse, ante omnia opus est, ut teneat catholicam fidem…” (Whosoever will be saved, before all things it is necessary that he hold the Catholic faith…).

The three words of praise, also written in Latin (Sanctus, Sanctus, Sanctus), further accentuate the triangular structure of the whole piece. While they are praising the Father, the Son and the Holy Spirit, it is also important to remember that repeating a word three times is the way to make the superlative form in Hebrew, which normally doesn’t have any option other than repeating the word two or three times. This is why biblical texts often have expressions like the song of songs, the flesh of my flesh or the Saint of Saints. So, writing Holy, Holy, Holy would be like saying the Most Holy.

Therefore, this hidden work behind the scene of the Coronation is, once again, a good example of how Gaudí paid attention to every last detail. And these details, which would be inaccessible for the vast majority of those admirers Gaudí’s work has inspired around the world, can now be discovered by all thanks to technology like the 360° spherical photographs that let us get up close, discover and, therefore, love this great work that is the Temple of the Sagrada Família even more.