Warning: Use of undefined constant ‘bwp_template_redirect’ - assumed '‘bwp_template_redirect’' (this will throw an Error in a future version of PHP) in /home/customer/www/blog.sagradafamilia.org/public_html/wp-content/themes/blog-sagrada-familia-v2/inc/security.php on line 115
 The Virgin Mary, the other protagonist - Blog Sagrada Família

The feast of the Immaculate Conception, on 8 December, reminds us that we are in Advent from the Sunday of Christ the King, celebrating the end of one liturgical year and the beginning of another. With Advent, preparations begin again for the arrival of the Messiah on Christmas, lighting a candle each of the four Sundays prior to 25 December, completing the Advent wreath. This light, growing from the penitent darkness, is a particularly joyful point in the midst of this process, when we celebrate Mary’s miraculous conception.

Gaudí, who was a member of the Lliga Espiritual de la Mare de Déu de Montserrat (Spiritual League of Our Lady of Montserrat) and a devotee of the Virgin Mary, missed no opportunity to honour her in the Temple project, dedicating the second most important lantern to her. However, this isn’t the only element of the Basilica that alludes to Mary. Really, the whole apse is, with its circular shape that, like a mother’s womb, surrounds the holy altar of Jesus Christ.

When Gaudí was building the crypt, the project was still in the very early stages (meaning very neo-Gothic in style) and the developer of the works, the Associació Espiritual de Devots de Sant Josep, still held a lot of sway. This group was particularly interested in extolling the figure of the father of the Holy Family, dedicating the central chapel of the crypt, inaugurated on the feast of Saint Joseph in 1885, to the Holy Patriarch. The chapel of the Immaculate Conception is to the right and, along with the chapel on the left, devoted to the Sacred Heart of Jesus, completes the Holy Family, with all three members. The other four chapels are dedicated to emblematic members of Jesus’ extended family: first, Mary’s parents, Joachim and Anne (the chapels located on the right and left of the three central ones, respectively), and then, Jesus’ cousin, St. John the Baptist, on the far left, and his parents Elizabeth and Zechariah, on the far right.

When the Temple crypt was completed, around 1891, Gaudí had already begun to focus more on the Virgin Mary. This can be seen in the stone representation of the Annunciation on the keystone in this space. This stone, which completes the central Gothic vault of the whole crypt, has a sculpture of the figures of Mary, the Archangel Gabriel and the dove of the Holy Spirit. It features highlights in gold, like rays emanating from the dove and bathing Mary, the stars on their clothing, the sceptre, and a ribbon that reads, in Latin, the first words of the Annunciation: “Ave Maria, gratia plena, dominus tecum”. 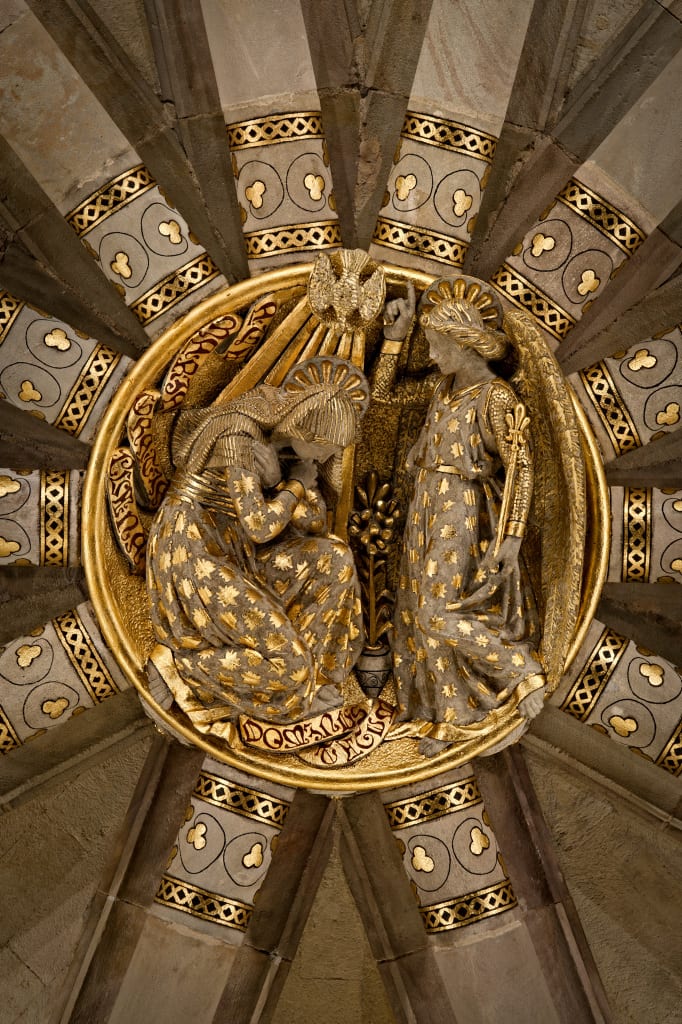 THE APSE, THE ADVENT AND THE VIRGIN MARY: EVERYTHING IS CONNECTED

From this point, the importance of dedicating the apse to the Virgin Mary grew and soon it became clear that Gaudí associated it with Advent. So, when he related the columns of the Temple to each Sunday of the year, he began the layout with the apse, with the first Sundays of the liturgical year – precisely the Sundays of Advent. Plus, he tied the seven apse chapels to the seven days of Advent before Christmas and laid out symbolism behind the spires that will crown them that clearly associates them with the prayers used at vespers in that last week. They are known as the O Antiphons, as each one begins with an admiration: “Oh! Sapientia, Oh! Adonai, Oh! Radix Jessé…”

These decorative and symbolic elements are not yet finished, but in the future they will be visible from the outside and visitors will be able to read them as they walk around the apse. However, visitors today can already see the symbolism inside, as stained-glass artist Joan Vila-Grau put the essential texts in the central rose windows in each of the chapels.

The ties between the apse and Mary are so strong that the architectural shape of the space itself is a symbol of Mary: rounded, like a belly that protects, deep inside, the altar that represents Jesus, which is covered by the seven-sided baldachin that symbolises the Holy Spirit.

However, at the Sagrada Família, Gaudí extolled this relationship when he crowned each of the upper railings and spires of the apse with a garden of plants, herbs and flowers, symbols of the immaculate virginity. Moreover, this relationship between the apse and Mary is made extremely clear in the morning star that will crown the tower of the Virgin Mary, the star that is still visible at dawn after the rest have gone. This symbol of Mary and a guiding light for travellers, the Stella matutina, is the star that, just before the rising of the great celestial object, the sun, announces the birth of the day, and also represents Advent, announcing the imminent arrival of Jesus, the following day of Christmas.

All of this shows how Gaudí, as the project evolved but also from quite early on, gave the Virgin Mary a central role through all of the symbolic elements available to him, despite the fact that the developers were devotees of Saint Joseph. 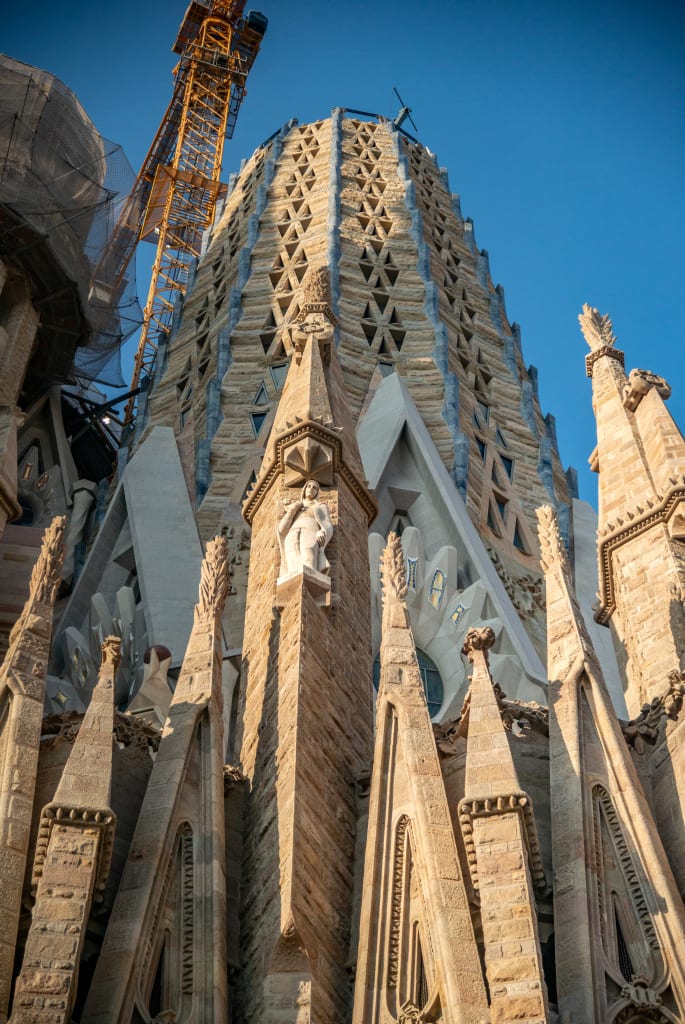