Antoni Gaudí made the outside façades of the Sagrada Família appear like huge altarpieces, with a clearly catechistic and evangelising purpose. In contrast, he wanted the inside to be a space of reflection and prayer, and this is why we find no large altarpieces but instead just a few sculptures with pronounced symbolic importance.

In fact, there are only four sculptures inside the Temple, and they mark the four ends of the cross in the Basilica’s floor plan. Thus, by walking along the transept from the Nativity door towards the Passion door, you can see the three figures which represent the three members of the Holy Family. In the loge on the Nativity side is Saint Joseph, relating him with Jesus’s childhood and adolescence. Across from it in the loge on the Passion side is the Virgin Mary, a place which associates her with the painful death and resurrection of her son, which she witnessed. The last figure, Jesus on the cross above the altar, is right between the other two sculptures.

The Virgin Mary is represented following the model of the Immaculate Conception, that is, as a young woman before her marriage, with her hair down. The twelve-star crown she is wearing on her head symbolises her as the queen of the Church, while representing the twelve tribes of Israel. 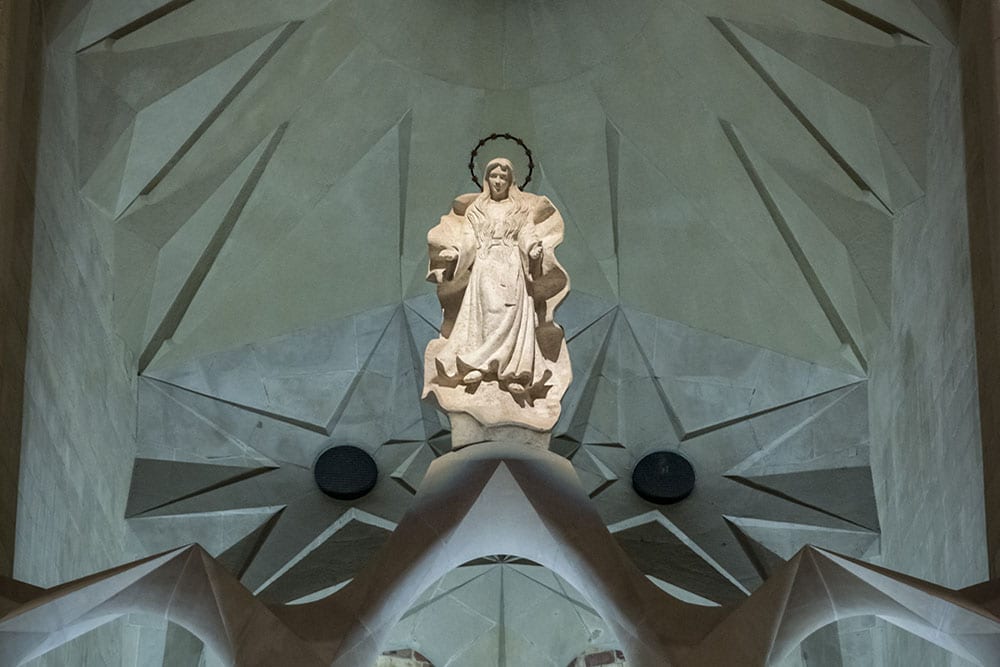 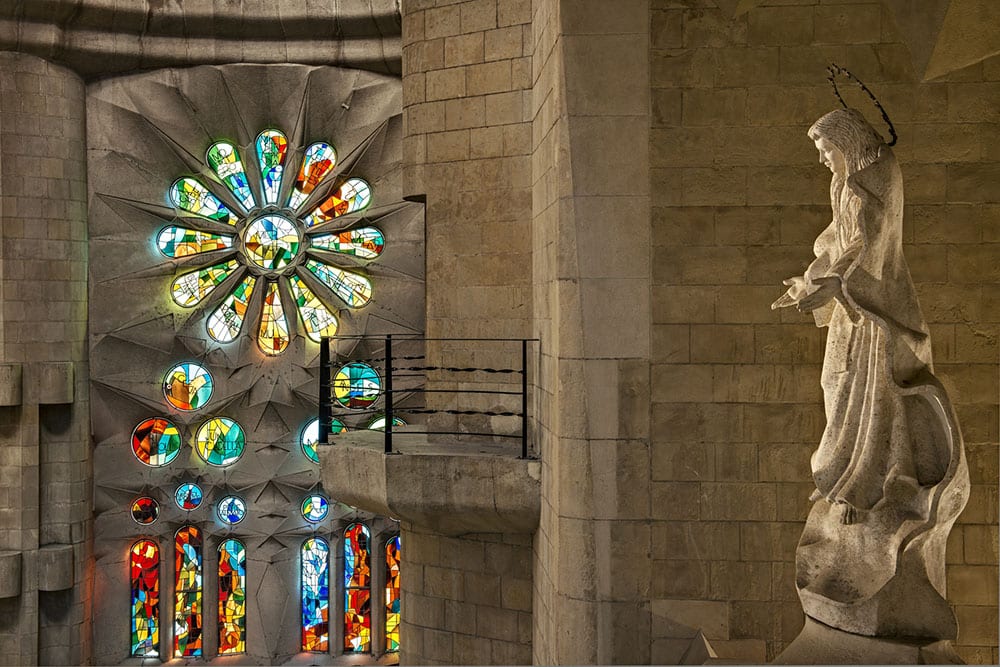 Saint Joseph is shown, as is customary, as an elderly man, since the texts indicate that he was already aged, a sign which also indicated his wisdom. He is represented at the moment when he was chosen to be Mary’s husband, that is, when, according to tradition, his staff blossomed as a divine signal that he had been chosen among all the suitors. This sign indicates that he is a righteous, virtuous man, and the flower that blossoms from it is associated with the lily. 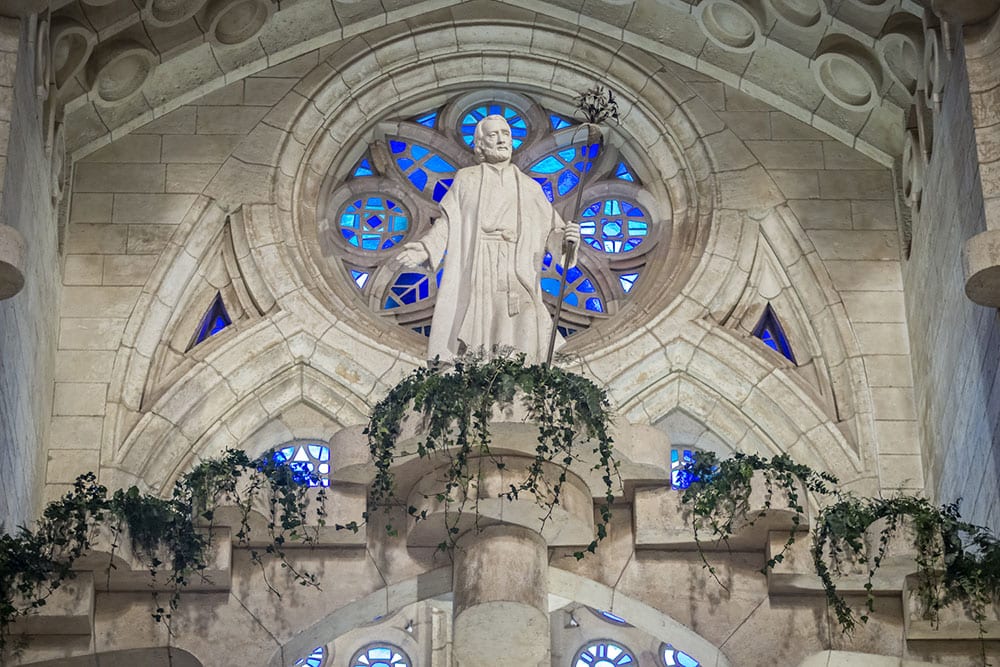 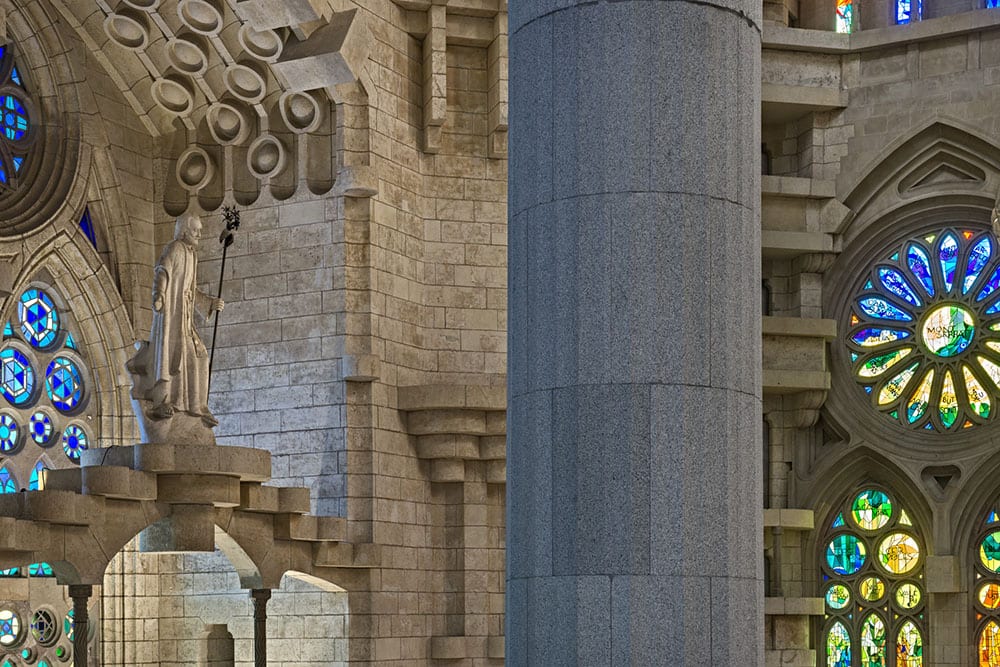 The two figures, the Virgin Mary and Saint Joseph, were crafted by the sculptor Ramon Cuello in 2009 and 2010. They are both made from the noble stone of travertine marble; the figure of the Virgin Mary is 2.8 metres tall, while the one of Saint Joseph measures 3 metres.

The Christ on the baldachin, which completes the group of the Sagrada Família, was sculpted in clay by architect and sculptor Francesc Fajula, who also created other sculpture groups at the Temple. In making it, he drew inspiration from the Christ at the base of the altarpiece at Casa Batlló by Carles Mani, the sculptor who worked for Gaudí. Today it can be seen in the central chapel of the Temple crypt.

The fourth sculpture inside the Temple is the figure of the patron saint of Catalonia, Saint George. It is located on the railing of the Jube balcony, around nine metres from the floor of the Temple, at a height similar to the others but above the main door, on the Glory façade. It was made of bronze by Josep Maria Subirachs and is 3 metres tall.

Gaudí had placed a Saint George presiding over the main entrance on the façade of Casa Botines in León. In the Sagrada Família, the sculpture of this saint was installed inside the Temple in June 2006, but it was not until the following year, 2007, that it was officially unveiled, to make it dovetail with the 125th anniversary of the laying of the cornerstone of the Temple. That date also matched the 550th anniversary of the saint’s patronage of Catalonia. 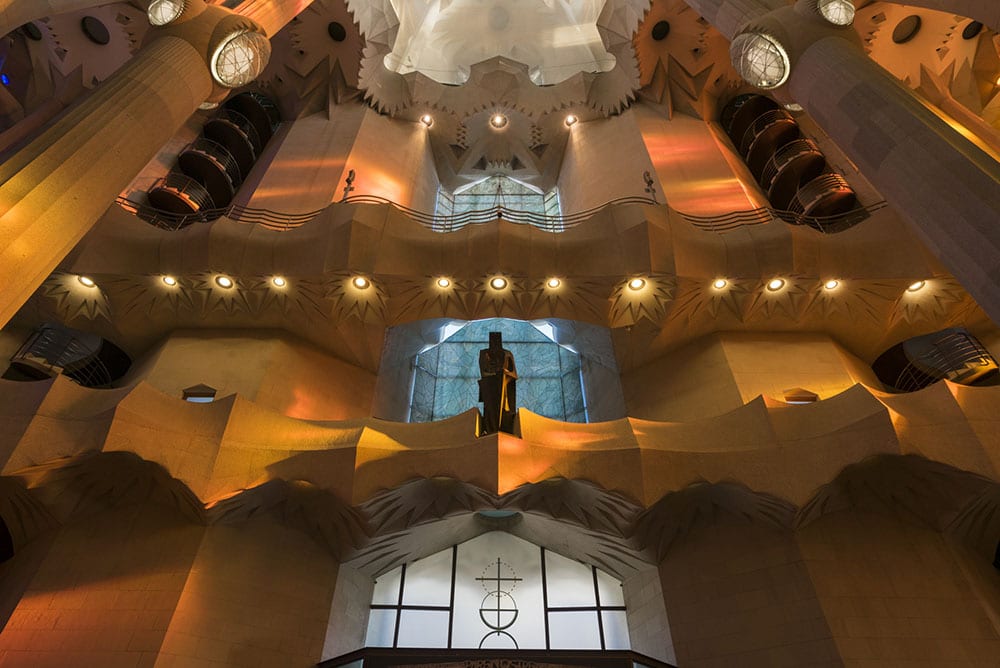 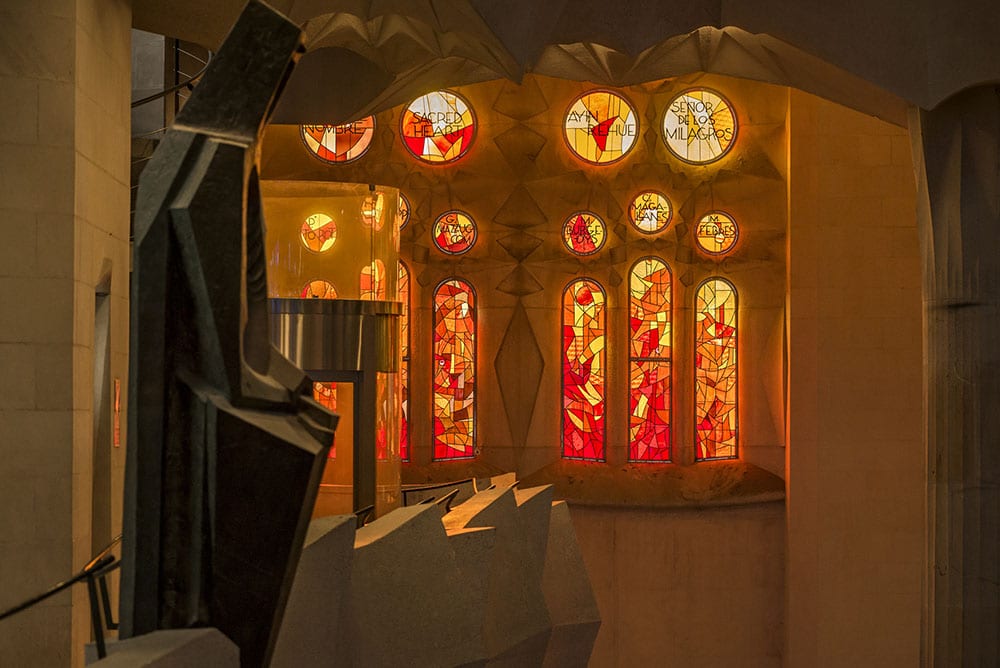 Throughout his artistic career, Subirachs made several Saint Georges, but the one we see in the Temple is different than the way the saint is usually portrayed. Here, he appears without a horse or dragon, nor with any sword or weapon. Subirachs had previously studied this model: the sculptor has another one like it that he made in 1975 for Barcelona’s Palau del Lloctinent, and another made of travertine marble with a sword which he made in 1985 for the square leading inside the Monastery of Montserrat. This year, the sculpture of this saint, along with all of Subirach’s works in the Temple, were declared a Cultural Asset of National Interest (BCIN), meaning that it will enjoy the utmost protection from now on.