Antoni Gaudí came into contact with the architecture profession well before earning his university degree: he worked as an assistant to Josep Fontserè on the project for the Parc de la Ciutadella, with Francisco de Paula del Villar on the throne of Our Lady of Montserrat, and with Joan Martorell, who was the one who suggested he be the architect of the Sagrada Família. He received his degree on 15 march 1878, and just five years later would become the architect of our Temple. If we take into account that he continued working until the day he died, on 10 June 1926, in total he spent 43 years working on the Temple out of his 48 years as an architect, which is 90% of his professional career.

We only mention these figures to give you an idea of how much Gaudí combined his work on the Temple with his other projects, above all in the early years. It would make sense that his personal, spiritual and professional growth could be seen in his work and, as a result of their coinciding in time, the Sagrada Família must have been influenced in some way by his gradually increasing maturity.

Based on this idea, we’ve set out, like a geologist on foreign soil, to find indications or traces of Gaudí’s other projects in the walls and finished constructions of the Temple that in some way illustrate this personal growth. Despite the logic of this hypothesis, in reality it isn’t very easy to draw a direct line between them. However, the Temple does have elements that draw from or were taken, adapted or transformed from Gaudí’s other work. And with this idea, here are some of the main influences:

Gaudí himself said more than once that Colònia Güell had become of vital importance to continuing with the project for the Temple. It was his test bench, like a trial laboratory.  The polyfunicular model with strings and weights that gave shape to the design for this small church, despite being upside down, is an important example of this empirical meaning Gaudí brought to the project. This came from the photographs of the gigantic model, which was covered in white cloth to allow the master to paint on the images and turn them into his visions for the project.

This work method was truly innovative but also quite overwhelming. For the Sagrada Família calculations, Gaudí explained he used the graphic method instead of the empirical polyfunicular model. But he always said they were one and the same; that one was born out of the other. So, what he learned through the Colònia Güell project is important for various reasons.

On the one hand, because this new vision of the structure was designed in a much freer manner, uninhibited by the rigid constraints of orthogonality between horizontal and vertical lines. In the Temple, we can easily see how the lines of the columns escape verticality and lean, seeking out the optimal structural position corresponding to the load lines. Or in other words, the line a string weighed down with a little bag of birdshot would draw. The characteristic arching shapes of the vaults in the Temple naves are the structural result of distributing loads by directing them towards the capitals of the columns and totally exposing the areas further away from them with hyperbolic openings.

On the other hand, at Colònia Güell we find a new building method that led to a new outer shape and texture. He rethought the tile paraboloids on the porch with a simple collection of weighted strings, which created the straight lines contained in these ruled surfaces. The result was a series of new shapes, new curves for truly surprising vaults and a new expressiveness thanks to the materials he chose and the way he laid them out on these surfaces. At the Temple, we can also see this new sort of vaults with ruled shapes, with not only paraboloids but also hyperboloids, as well as the texture and warmth of these ceramic materials that in other places from Gaudí’s era were covered with a protective layer of plaster, coated in mortar or other more ‘noble’ materials. 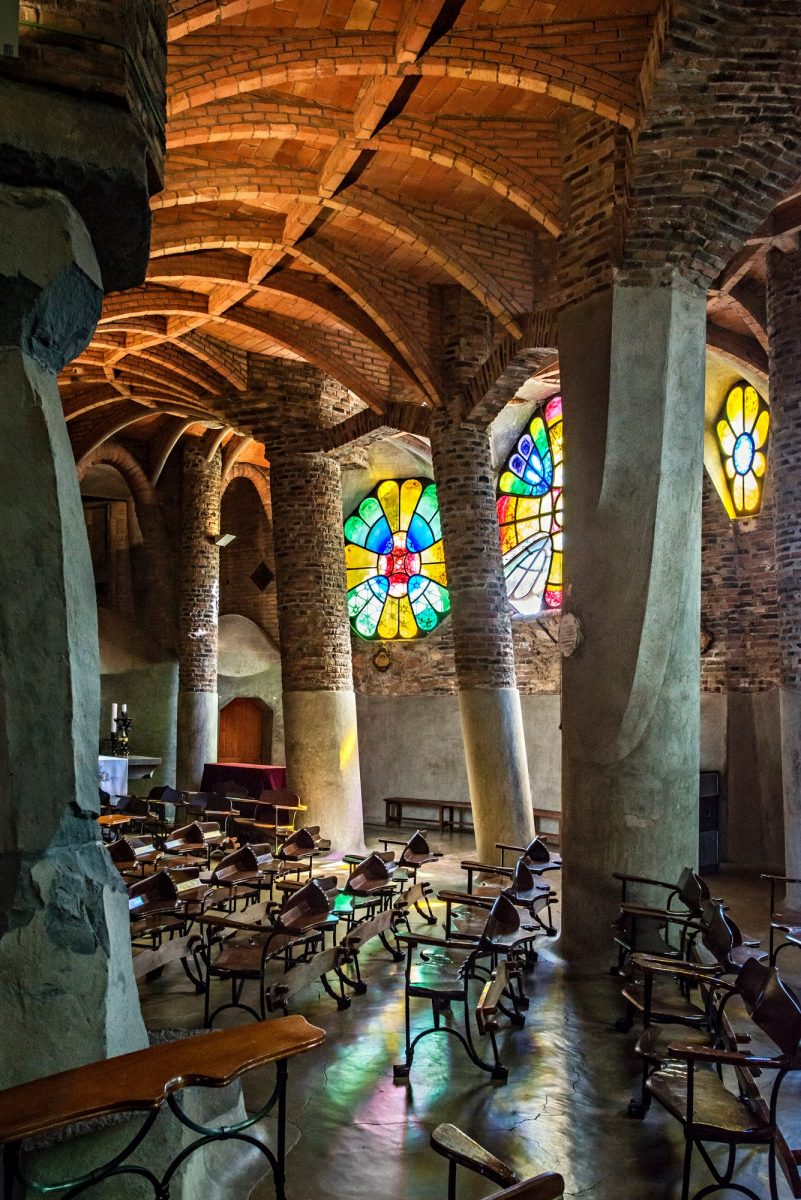 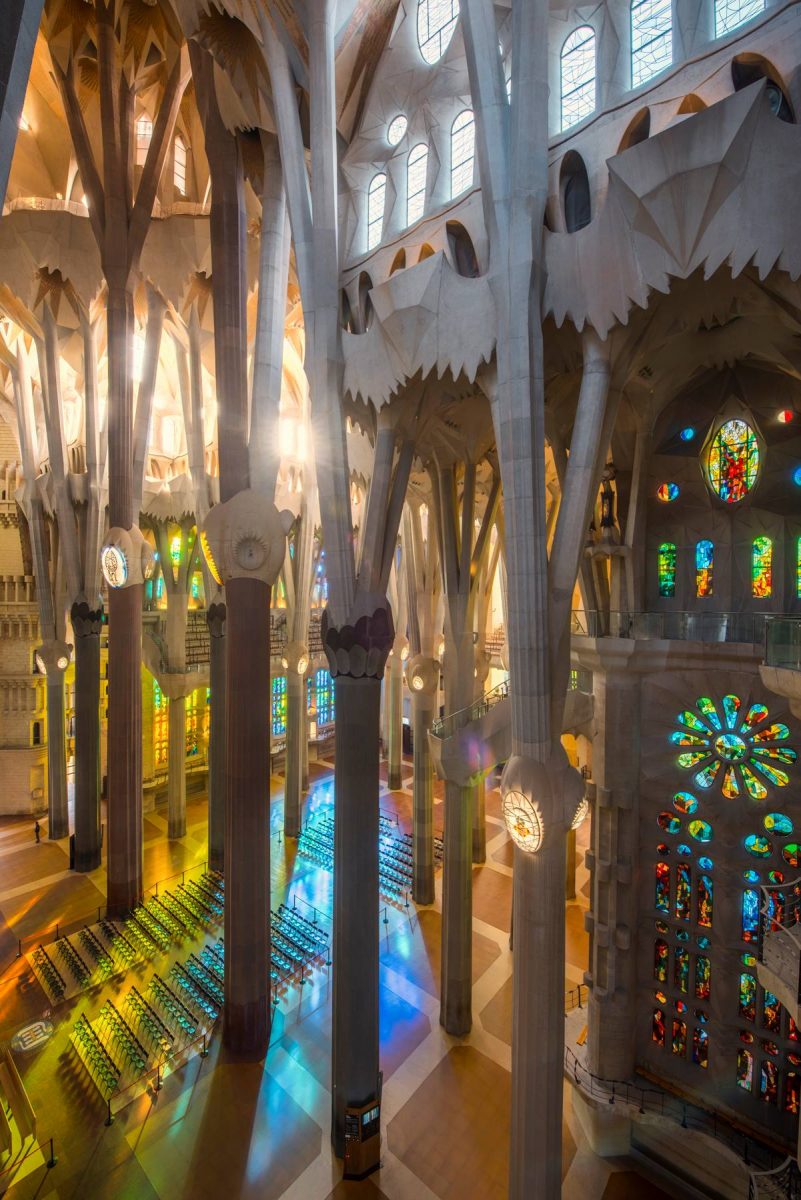 LA PEDRERA AND BELLESGUARD: THE UNIQUE EXPERIENCE OF THE ATTICS

Above the Temple naves, Gaudí designed a double-layer stone roof, justifying this with the fact that over time the wood ones would have worn too quickly and have been destroyed. So, between the naves and these roofs, there are three levels of attics, one on top of the other. These secondary spaces are also necessary for the space to work properly from all standpoints: architecturally, functionally and, even, in terms of comfort. They have been carefully maintained, even though visitors can’t see them.

The attic spaces at some of Gaudí’s other projects are more well known, however, like those at Casa Milà (La Pedrera), which are now home to the Espai Gaudí museum.  All these spaces in exposed ceramic materials, without whitewashing, stir up feelings of interior space in those who see them that are difficult to put into words. At the Temple, this experience of space, despite being secondary, also guided the project for the attic spaces above the naves, especially in terms of selecting the shapes (ruled surfaces, paraboloids, convex curves, etc.) and materials (exposed ceramic).

Also at La Pedrera, we can see that the top floor, when seen from the outside, is covered in a different sort of stone, from Ulldecona, and, if you look closely, you can see this outer layer is broken down into square pieces laid diagonally, like a net. At the Temple, the outer layer of stone on the apse vaults, 30 metres up, as well as that on the side naves and transepts, uses the same stone laid in the same way. Plus, if we look at the windows that penetrate these surfaces to bring light into the building, we can also find similarities or some influence between the two. 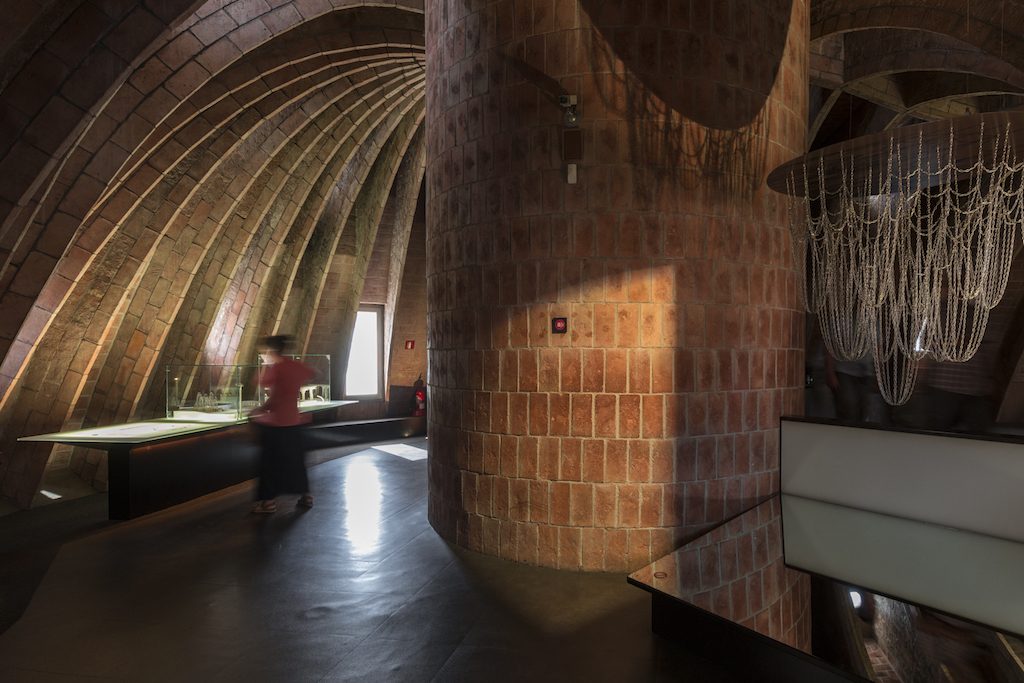 PARK GÜELL: TRENCADÍS MOSAIC AS AN AESTHETIC AND BUILDING RESOURCE

The freedom in the colours that the ceramic trencadís mosaics bring to curving surfaces is possibly one of the aspects that most attracts visitors to Park Güell.  It is everywhere: on the buildings at the main entrance, on the roofs, on the stairs with the dragon fountain, in the Hypostyle Room and on the bench along the edge of the main square above it. We have to believe that this prior experience, not only with shape and colour but also how to build with it, was a learning experience that saw its maximum expression at the Sagrada Família in the pinnacles or terminals on the bell towers.

However, in Gaudí’s architecture nothing is random or capricious. The trencadís mosaic, in fact, is not only an aesthetic resource but also has constructive purpose, as we can see, for example, in the spire on one of the buildings at the entrance to Park Güell: the checked mosaic covering in blue and white creates interlaced helices that follow the lines of the metal reinforcements inside the structure. Similarly, the inside of the pinnacles on the Nativity towers, which Gaudí built in his final years, also have a significant metal skeleton inside. So, the trencadís allowed him to cover the outside of this steel, hiding it inside the concrete mass. 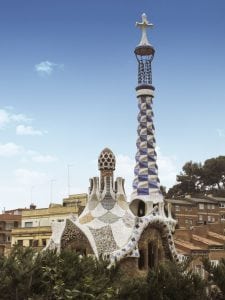 RESTORATION OF THE CATHEDRAL IN PALMA DE MALLORCA: THE ORIGIN OF THE DIMENSIONS OF THE TEMPLE

When looking at the Temple, we can see things that show a clear link to the fantastic work Gaudí did in restoring the cathedral in Palma de Mallorca. To give just a few examples, the heptagonal baldachin above the altar is a nearly identical replica of the one in Mallorca, as well as several wrought-iron elements and railings, and the lamp in the courtyard leading into the crypt. Nevertheless, possibly one of the most important influences, although it isn’t as visible or literal, was on the general measurements of the Temple.

Mallorca has one central nave that is 12 metres wide and 44 metres tall and side naves that are 33 metres tall. Gaudí knew this was the outer limit of a Gothic structure and based the measurements for the Sagrada Família on what he had learned in Mallorca, in multiples of 7.5 metres. So, the central nave is 15 metres wide and 45 metres tall, and the side naves 30 metres tall. These measurements came from the structural study Gaudí and his assistant Rubió did for the Mallorca project, comparing cathedrals from all over.