Some may believe the sacristies, cloisters and other structures along the perimeter were added by Gaudí to bolster the grandiose nature of the building. In truth, however, the architect was thinking about these structures from the very early stages of the project. In this article, we’ll see how the sacristies, one of which was finished in December 2016, are playing a key role in finishing the Basilica.

In 1917, the Temple magazine published a floor plan that shows how Gaudí was already thinking about the Temple’s two sacristies, symmetrical on the corners on Carrer de Provença, in quite a lot of detail. Although it quickly became outdated (Gaudí transformed the project little by little), if you look closely at the angle of the sacristy, you can see a series of details that already speak to the architect’s desires that would remain and continue to influence the definitive project for the Temple.

The most important thing in that version is that it shows a central square of space, set off with a colonnade around the perimeter, and, around it, a crown of different sized rooms. This is an antecedent to the space that would finally be defined for the sacristies: central, developed at height, delimited by eight columns and covered with a hyperboloid to bring in light from above.

The floor plans show how Gaudí planned the sacristy as a higher, central body, with a second level of windows and pediments topped with a spire, still within the Neo-Gothic style. It is as if the sacristy had a large lantern, or as if it was a large lantern itself.

The photos that remain of the plaster models of the sacristy Gaudí was working on when he had this Neo-Gothic style in mind clearly show this formal parallel between the initial proposal for the top of the sacristy and a typical Gothic lantern.

They show a series of roofs that follow the windows, as well as delimiting a square floor plan. The elevated body rises up from the centre, acting as a lantern over the central space.

In photos from a bit later, however, the sacristy roofs have changed. They now have a much more dome-like shape, but the central, Neo-Gothic lantern remains the same as in the first version.

This relationship between the sacristy and the lantern that Gaudí was beginning to establish when he was designing the former would later become totally intertwined, to extreme consequences. Gaudí modified the roofs of the sacristy, evolving towards dome-like shapes until they became masterful paraboloid domes.

If you update that same elevation drawing, we can see that Gaudí proposed very tall domes for the sacristies, nearly on the same level as the apse pinnacles. This new profile clearly contrasts with that of the Neo-Gothic lantern in the previous project. Finally, the definitive plaster model, in great detail, shows the height of the building a bit lower but has a pinnacle on the dome that would act as a lantern and reinforce Gaudí’s original idea of creating a central, elevated space full of light inside the building. The inner vaults with a great central hyperboloid to bring in light and the large windows, including elliptical and circular rose windows on the first floor, clearly reflect this desire.

This new open geometry, which so satisfied this desire, is what led it to become, by transforming the height, the new shape of the central towers or lanterns. 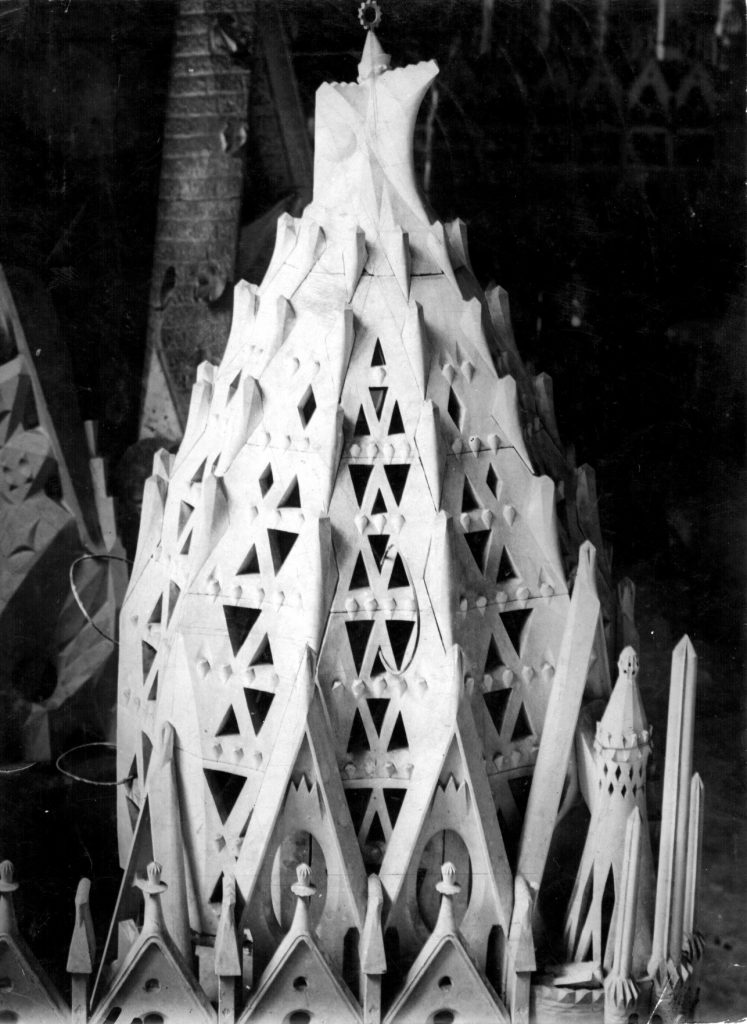 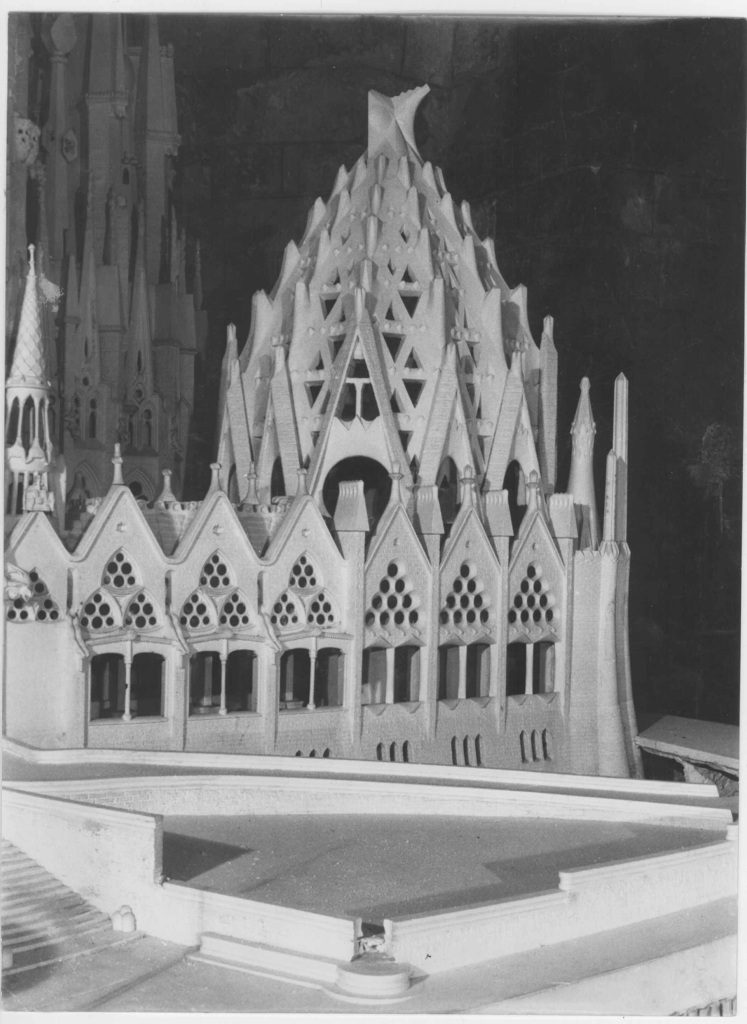 Isidre Puig Boada, Gaudí’s disciple and the author of books of his quotes and desires for the temple project, on several occasions shows the relationship between the sacristy and the lanterns. These ties are not only formal but also structural and symbolic similarities. In this regard, the succession of low domes that culminates with the lanterns, the maximum exaltation of the Temple, shows the harmony in the general plan and this is why there is colour on all its pinnacles, which vibrate with light and reflections to connect the building to the heavens. 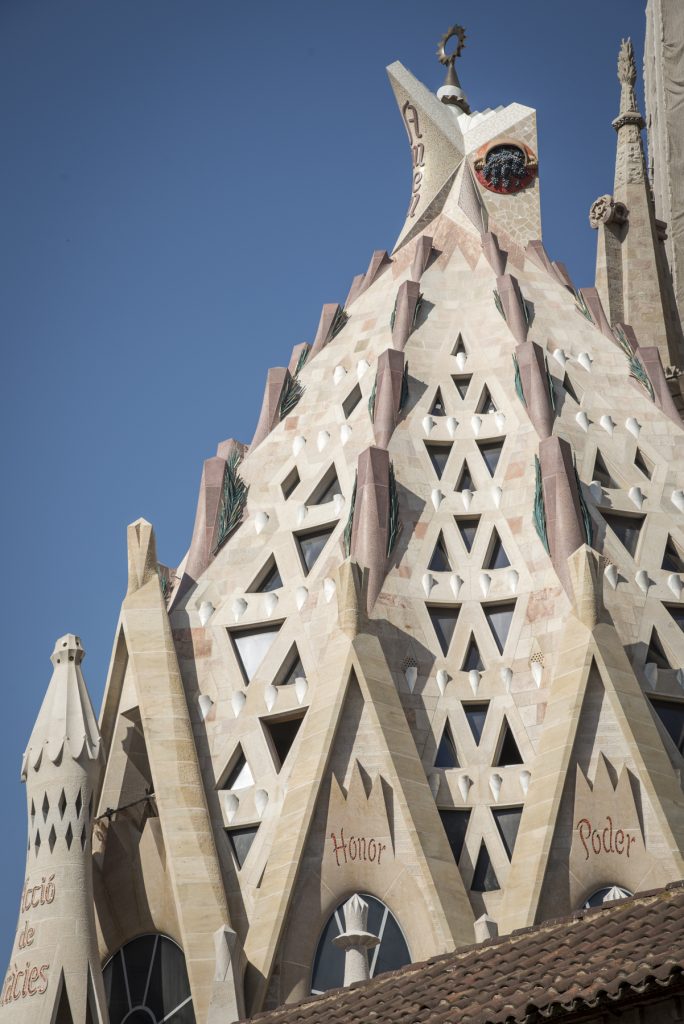 So, the process of designing the sacristy and the fact that it was conceived of as a sort of lantern shows us that it is an indication of what Gaudí would later express. Today, for us, the experience of building the sacristy dome before the central lanterns, as Gaudí wished, was a trial run for the geometry, structure and building method that would later be used for the Temple’s large towers. In fact, although we weren’t talking about post-tensioned stone when we were working on the sacristy, we did come up with the embryo of the future main structural skeleton, a way to subdivide and make modules to organise production and control processes more easily. And we began working with panels pre-fabricated at the external workshop in La Galera, learning how to overcome the difficulties of transporting and hoisting them, as well as devising systems to mark and assemble them provisionally in La Galera and definitively at the Temple.