Warning: Use of undefined constant ‘bwp_template_redirect’ - assumed '‘bwp_template_redirect’' (this will throw an Error in a future version of PHP) in /home/customer/www/blog.sagradafamilia.org/public_html/wp-content/themes/blog-sagrada-familia-v2/inc/security.php on line 115
 The pediment of the Passion façade: Jesus' victory over death - Blog Sagrada Família

Antoni Gaudí wanted the Sagrada Família to be a huge bible in stone. This is why he gave each space at the Temple its most representative, corresponding symbology. In this regard, he made the three façades of the Basilica transcendental monuments to the life of Jesus: his birth, death and resurrection, and glory.

Gaudí designed the Nativity façade and the Passion façade to be totally different, both in terms of their symbols and in their artistry and expressiveness. At one point, someone suggested he begin the works with the Passion façade, which faces Barcelona, instead of the Nativity façade, which faces away from the city. But Gaudí considered it and decided this wasn’t the right solution; he didn’t think the average resident would like the Passion façade much. It was to be very serious, in line with the great drama of the ordeal it tells, and that wouldn’t encourage people to give alms, which were the only way to ensure the work would continue. Isidre Puig Boada explained it as follows in El pensament de Gaudí:

Some may find this façade too extravagant. But I wanted it to inspire fear, and to do so I used plenty of chiaroscuro, recesses and protrusions, all of which gives it an extremely gloomy effect. What’s more, I’m willing to sacrifice the building itself, to break arches, cut down columns, in order to give people an idea of how bloody the sacrifice is.

Unlike the joy of Christmas -with flowers, birds, soft, rounded shapes, and the drops and trickles of melted snow- on the Nativity façade, the death and resurrection represented on the Passion façade were to be expressed with a dark, sinister feeling to convey the cruelty of Jesus’ last hours. The twelve sculptural groups that describe the hours between the last supper and the resurrection of Jesus Christ were commissioned to sculptor Josep Maria Subirachs, who in his extremely personal style gave them exactly the angular, dramatic character Gaudí wanted. The entry porch is made up of six leaning, unadorned columns in front of the façade, which hold up a cornice where Gaudí designed another portico area in the shape of a pediment or upper narthex. The eighteen bone-shaped pillars symbolise those who died and create a covered space through which Gaudí conveyed the Bosom of Abraham.

Gaudí put on the upper narthex of the Passion façade those who were walking towards resurrection: the patriarchs, on one side (starting with Adam and Eve), and the prophets on the other, whose names Subirachs inscribed on the wall behind. In ascending order towards the centre, they all come together in the stained-glass window of the resurrection, which acts as a background from the street. Finally, the pediment of the Passion façade is crowned with three acroterions symbolising Jesus’ victory over death: one in the centre and one on either side.

Acroterions are decorative elements typically found in Greek and Roman architecture that were placed over the top or on either side of a triangular pediment. Inspired, therefore, by classical architecture, Gaudí designed the upper narthex on the Passion façade as a pediment with an acroterion at each corner: in the centre, a cross with angels forty metres up, expressing the triumph of charity and love over martyrdom and death. On either side, two representations of Jesus from the Old Testament: on the left, the lion of Judah, who beat death; and, on the right, the lamb or ram of Abraham, offered up as a sacrifice.

The Passion façade is nearly finished, except for these three acroterions on the pediment and the empty tomb. The cross and the angels are still being designed and produced. The sculptures of the lion and the lamb, however, are further along, although they’re still making a few small changes to the latter. Both of them will be put in place any day now. 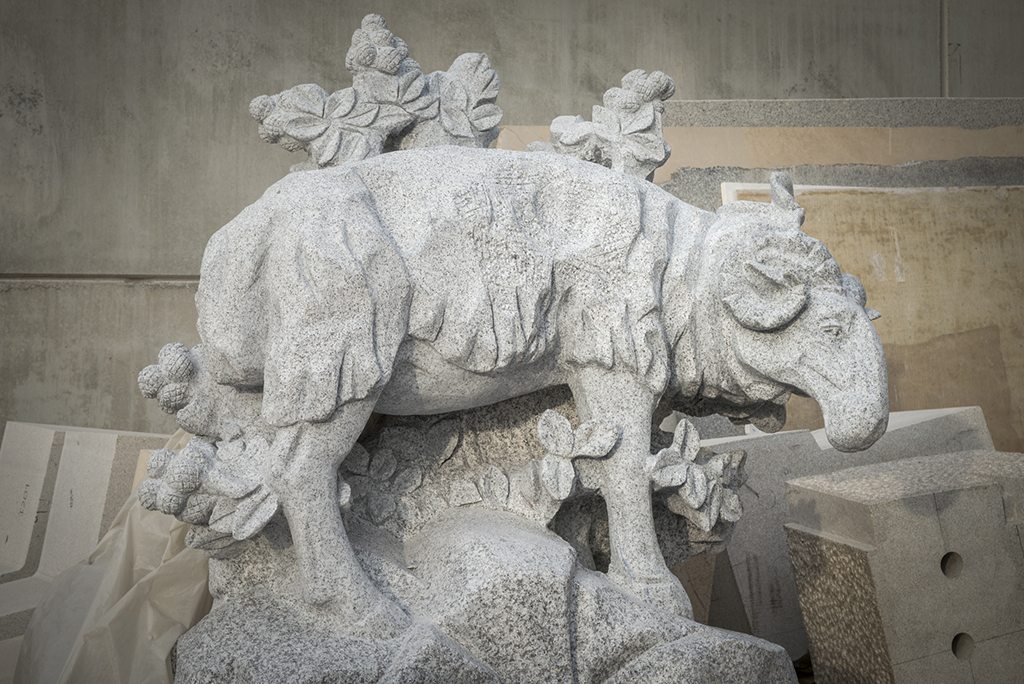 CREATING THE SCULPTURES: FROM ROBOTICS TO CRAFTSMANSHIP

Sculptor Lau Feliu was commissioned by the Junta Constructora to create the figures of the lion of Judah and the lamb. The artist’s process has evolved over the course of the project, in ongoing consultation with Head Architect Jordi Faulí and Project Director Xisco Llabrés to assess the progress, in meticulous detail, and suggest the best way to express, put in place and fit these figures into the existing façade, taking into account both the bible scriptures and Gaudí’s plans. So, it all began with small, three-dimensional models, which Feliu made in clay to 1:25 scale. Afterwards, he increased the level of detail by moving to 1:10 scale. And, finally, he created 1:3 scale clay models.

Plaster moulds were made from these clay models to create identical plaster models, which are much better to work with. These new 1:3 scale clay models were scanned to make three-dimensional models that can be viewed on the computer with the rest of the façade, which had already been modelled. To go from plaster to stone, and to life size, this virtual model was used to carve the figures out of a block of stone with a robot. This was a first roughing out, down to just over one centimetre from the final surface. And, then, the artist hand sculpted the final textures of the pieces, after the brute-force work of the general shaping was done, going straight to the textures and surfaces, which is the more artistic and artisanal part of the process.

The stone used for these two sculptures is Tarn granite, from the French region of Tarn. This stone had previously been used to build the columns and the crest of the cyma.

SYMBOLISM OF THE LION AND THE LAMB

Jacob, son of Isaac and grandson of Abraham, had twelve sons, the heads of the twelve tribes of Israel. Just before he died, Jacob wanted to bless them and, although Judah wasn’t the eldest, Jacob gave him the sceptre of rulership and called him the lion. So, the lion of Judah became the symbol of the tribe of Judah, which continued through the generations to King David and King Solomon, and, much later, Jesus of Nazareth, the Messiah, according to the genealogy of Saint Matthew.

In Christianity, the lamb represents Jesus, who sacrificed himself for the sins of mankind, drawing parallels to the story in Genesis that tells how, after testing him, God rewarded Abraham with a ram stuck in a bush so, at the last moment, he would not have to sacrifice his son Isaac. 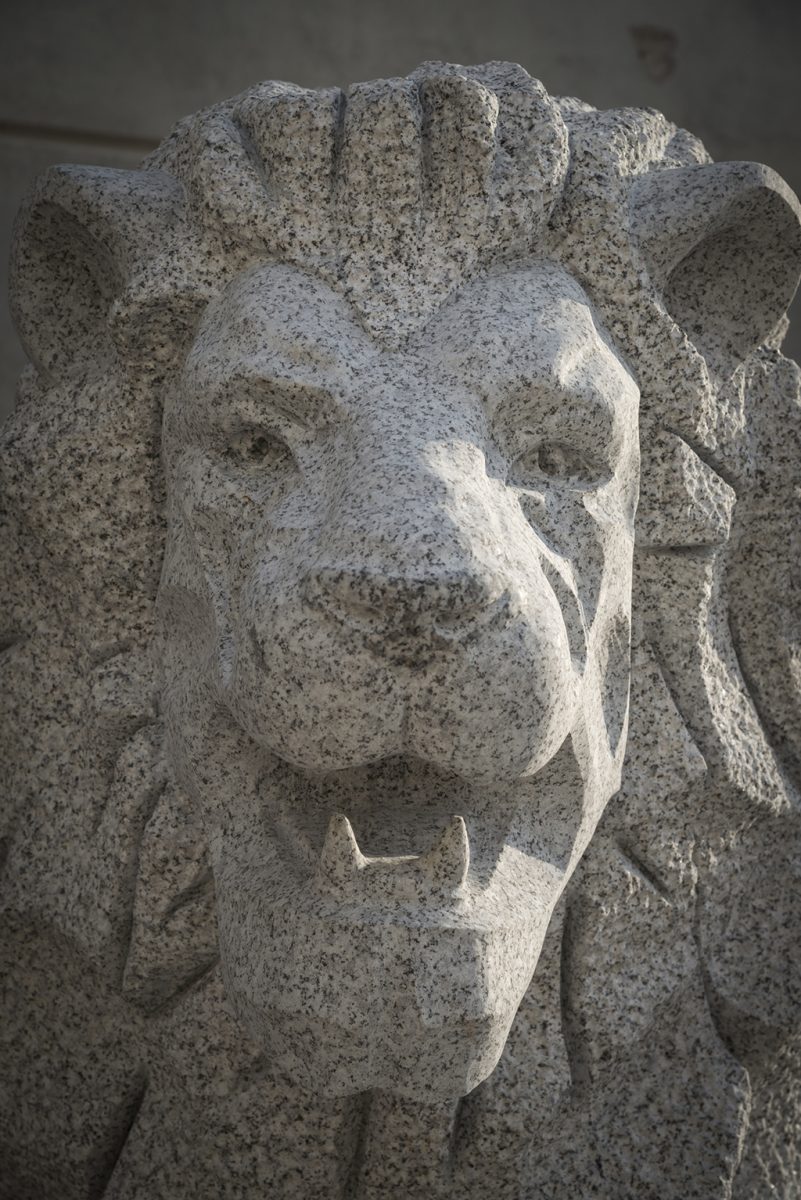 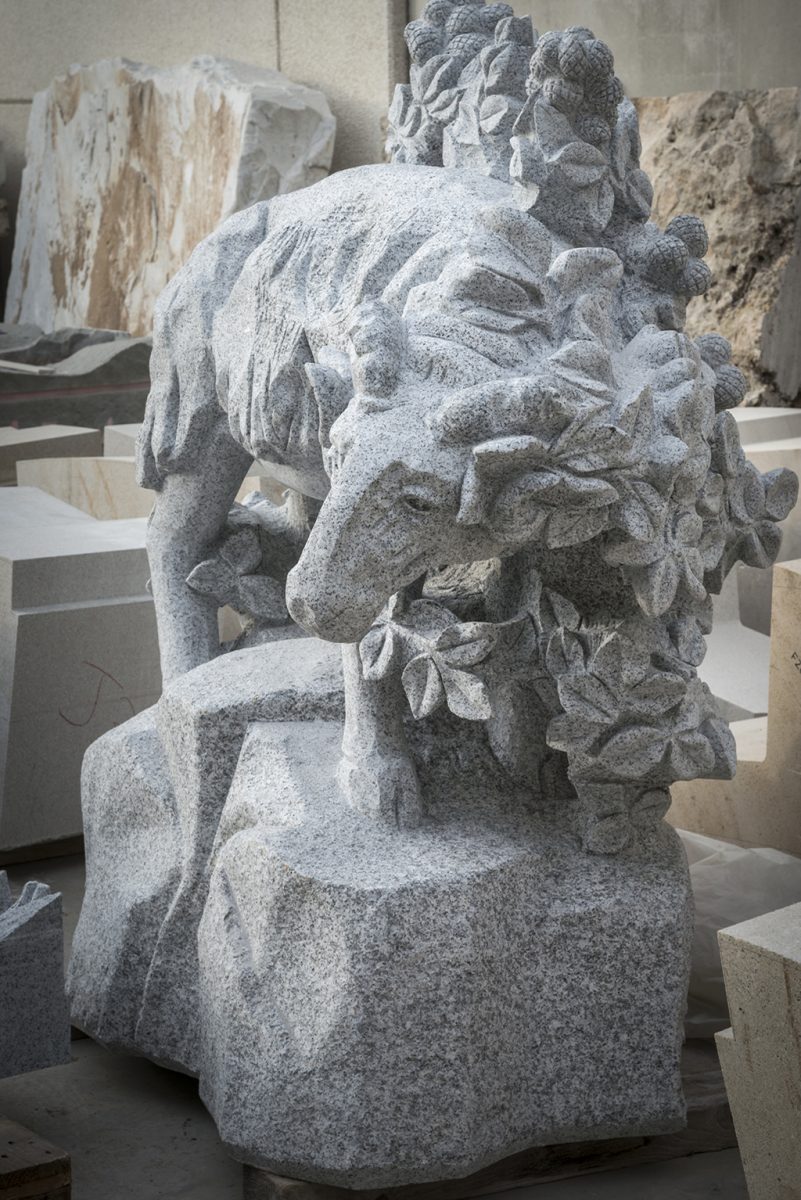