A construction site as unique and monumental as the Basilica of the Sagrada Família requires machinery of the same magnitude: the cranes working on the building are the most representative example.

The cranes, which like the towers are visible as part of the city’s skyline, are the Temple’s loyal companions and witnesses to the progress of the works. Although not aesthetically pleasing, they are in no way secondary structures: their little-celebrated importance goes beyond just putting pieces in place. The cranes, in fact, have been key in setting the date of completion for the central towers in 2022 and, as a result, the completion of the whole Temple in 2026.

Of the four cranes currently working on the Basilica, one is particularly noteworthy: the main crane, the mother of all cranes.

WHY A “MOTHER CRANE”?

In 2012 there were five cranes involved in building the Sagrada Família. When faced with beginning construction on the tallest towers (the central towers of the evangelists, the Virgin Mary and Jesus Christ), it was necessary to reconsider which cranes should continue serving the Temple and which would have to be acquired to meet future needs.

The method using pre-assembled pieces that had been designed to build these towers (the pieces are made in Galera, in the town of Gaià, in the Bages region, and transported to the Sagrada Família where they are put in place like a puzzle) required a much larger crane with enough power to lift these heavy new pieces.  In addition to the needs of this approach, there was also the possibility of having a machine that could be used for maintenance tasks on the other cranes. With these two premises in mind, the conclusion was reached that the best solution to cover these needs would be to have a new crane that was much larger.

So, in 2012, the site acquired a huge crane, giant, purchased in France and installed over the crossing of the Basilica at 67 metres above ground level. Its metal arm can cover almost all of the diameter of the Temple, lift up to 24 tonnes (more than twice the previous load) and reach 180 metres. This crane has the latest technology, including a camera that controls the difficult movements between the towers millimetre by millimetre.

The arm was raised to 141 metres above street level to build the towers of the evangelists, the tower of the Virgin Mary and the sacristy. In 2019, it is expected to move up to its top height of 180 metres to build the tallest tower, the tower of Jesus Christ, which should stand at 172.5 metres in 2022. When fully extended, the crane arm will be higher than Montjuïc (177.72 metres); however the towers will never surpass this height as Gaudí didn’t believe any human construction should stand above that of God.

Giant machines like this one, with the same privileged views the central towers will have once finished, are quite rare: it is the only one of its kind in Barcelona and one of only 15 in the world. This is why, given its magnitude and because it can supply the other four smaller cranes operating today, it has been baptised the “mother of all cranes”.

SPECIFICS OF THE CRANE

The “mother crane” was chosen for its attributes in terms of practical utility. The main one is that it is controlled remotely and has sensors that help compensate for the difficulties crane operators experience in accurately visualising the movements of their load. These sensors help operators put the pre-assembled pieces in place and fit them together precisely.

Additionally, complementary but also highly useful features of this crane include a black box, like that found in planes, which is extremely necessary in case of an accident, and a toilet in the operating cabin, which is highly practical for the operator. 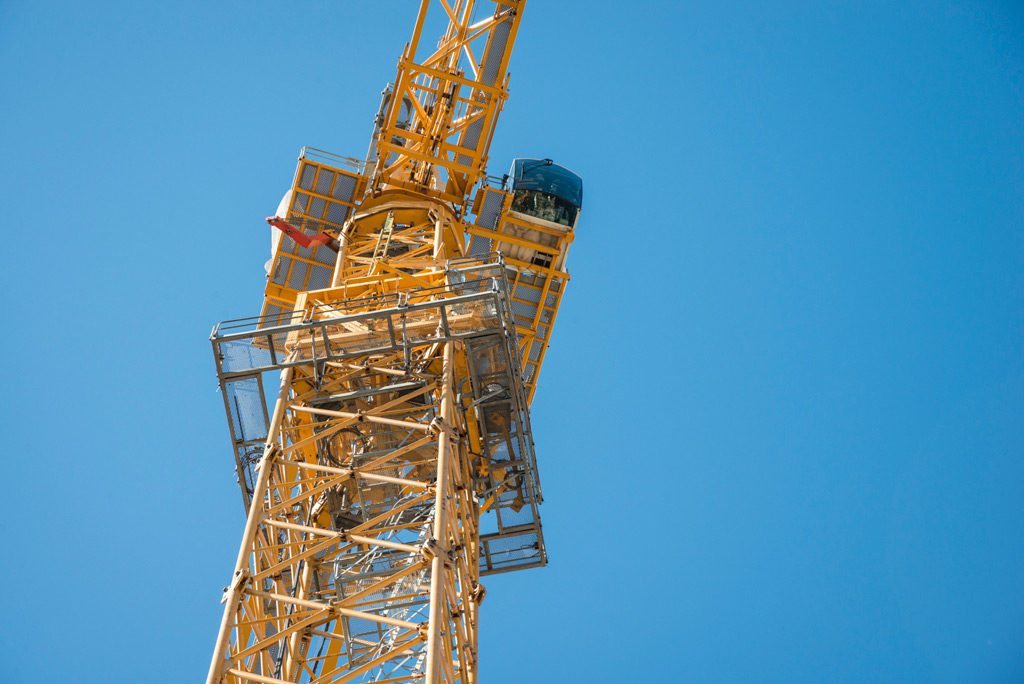 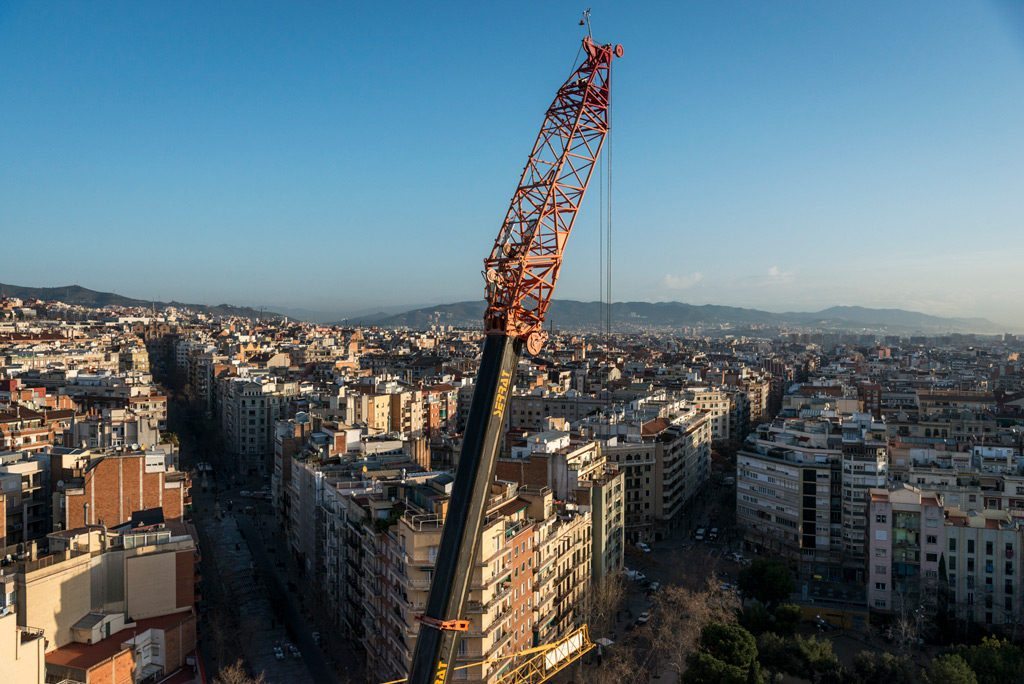 Although it isn’t a custom-made crane, some modifications were requested.

First of all, the cable drum, which rolls up the steel cables for the hoisting mechanism and the load, was changed. As this sort of crane is often used for skyscrapers and the motor is high enough, the original model has less than 1 km of cable. For the Sagrada Família, a longer cable was needed so the cable drum was also made larger.

Secondly, a more powerful motor was installed in order to facilitate the pre-assembly method. Lifting and putting the heavy prefabricated pieces into place requires a lot more horse power than the standard model has. Increasing the power of the motor meant no complementary machines were needed.

The “mother crane” is strategically located: if it has to stay in place until the Temple is fully complete, this location ensures that there will be no danger of hitting the towers or damaging any other part of the building. Plus, its arm supplies the other cranes being used at the Temple, so no additional, external cranes are necessary for maintenance. This avoids the bother these cranes could cause, for example, by invading the street.

Using this crane, and introducing the pre-assembly method, has made construction of the Sagrada Família a faster, more effective and simpler process. So now, for example, it only takes six and a half hours of work to assemble an eight-faced level on the towers of the evangelists, much less than with other less innovative methods.

The mother crane saves time and has made a method normally used for other large, tall buildings a viable option for Gaudí’s emblematic building. 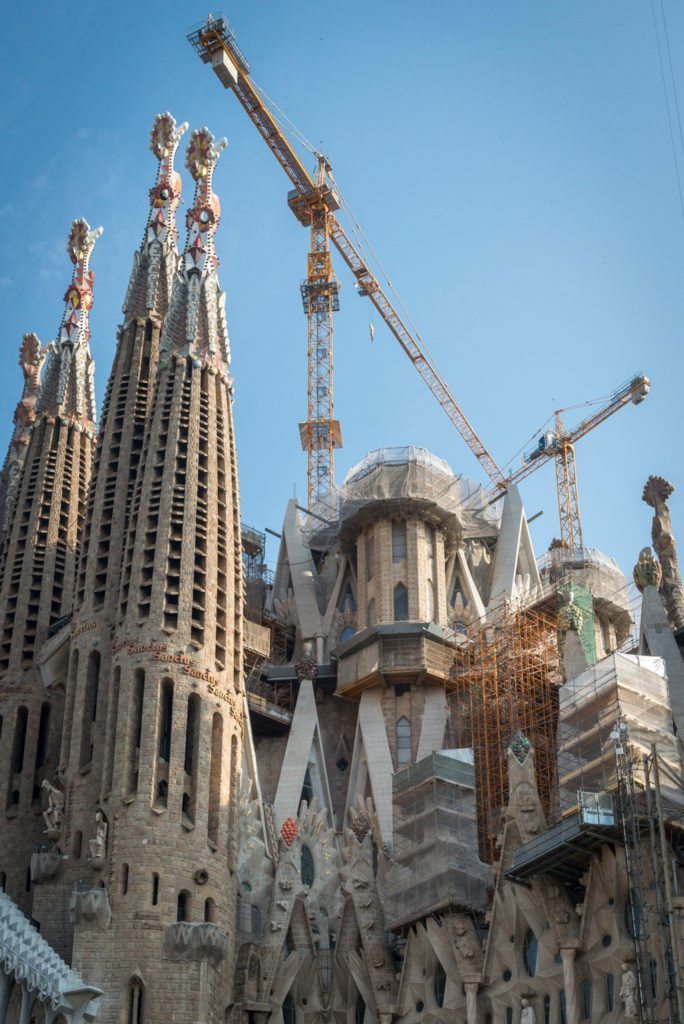 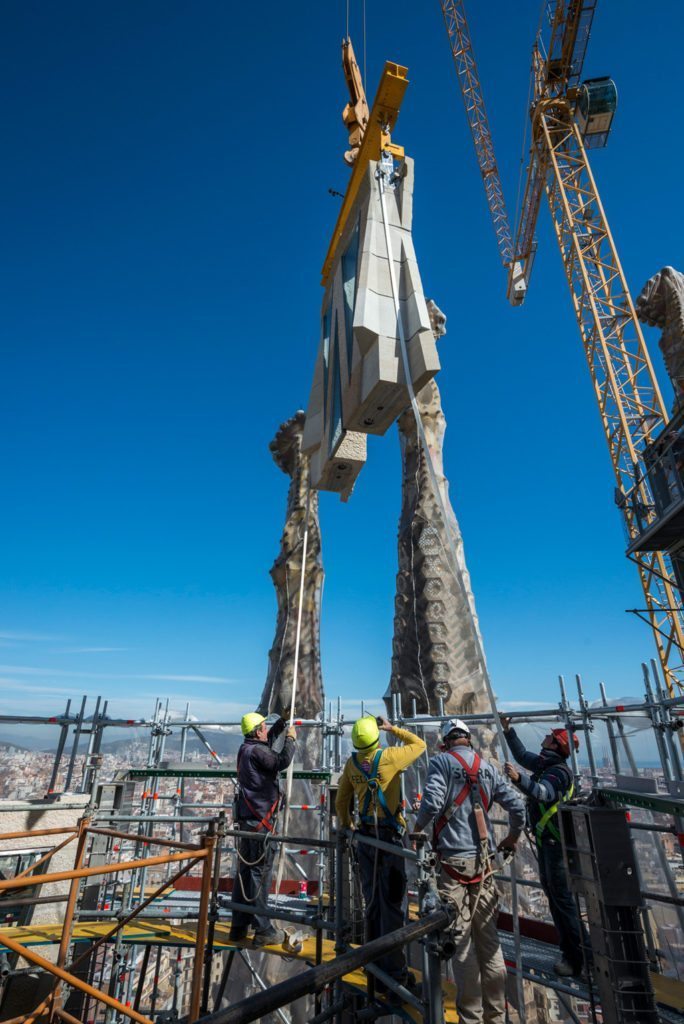