Warning: Use of undefined constant ‘bwp_template_redirect’ - assumed '‘bwp_template_redirect’' (this will throw an Error in a future version of PHP) in /home/customer/www/blog.sagradafamilia.org/public_html/wp-content/themes/blog-sagrada-familia-v2/inc/security.php on line 115
 The Evangelists: - Blog Sagrada Família

Now that the six central towers are growing at the same pace, which is quite fast thanks in part to the tensioned-stone building technique, the time has come to talk about what will go on top of them. Blog readers already know that the pinnacle of the tower of Jesus Christ will be a four-armed cross and that the tower of the Virgin Mary will be crowned with the morning star. But what about the four towers of the Evangelists?

From the first sketches of the completed Temple, these towers have always been topped with figurative representations of winged creatures. Why? We’ll find out right now.

The Evangelists were the authors of the Gospels, which are the texts that describe Jesus’ exemplary life, more catechistic in intention than historical. In the early years of Christianity, many people wrote about those deeds that moved the whole world. However only four of these texts were chosen as the official Gospels. So, the four Gospels in the Bible are those according to Matthew, Mark, Luke and John, the first and the last being direct disciples of Jesus. For this reason, the Evangelists are extremely important, as they represent, to some extent, the word of God.

In the Book of Revelation, Saint John describes the vision he had of four important figures in a privileged position around the throne of God. He speaks of a sort of lion, a calf, one with a human face and an eagle, and says all of them had wings and many eyes. So, in representing the four Evangelists, these four winged figures have traditionally been used. They have been present in temple architecture since the Middle Ages, and in art and Christian iconography they are known as the tetramorph.

THE SYMBOL OF THE TETRAMORPH

Tetramorph means, literally, four shapes. This word was previously used to refer to representations of the four basic elements (earth, air, water and fire), the essence of everything according to Greek philosophy. So, it is no coincidence that there were four Gospels chosen as the official ones and that, from the beginning of Christianity, the idea of the tetramorph has been used to refer jointly to the four Evangelists.

At the Sagrada Família, there are various elements that, more or less discreetly, refer to these four figures. 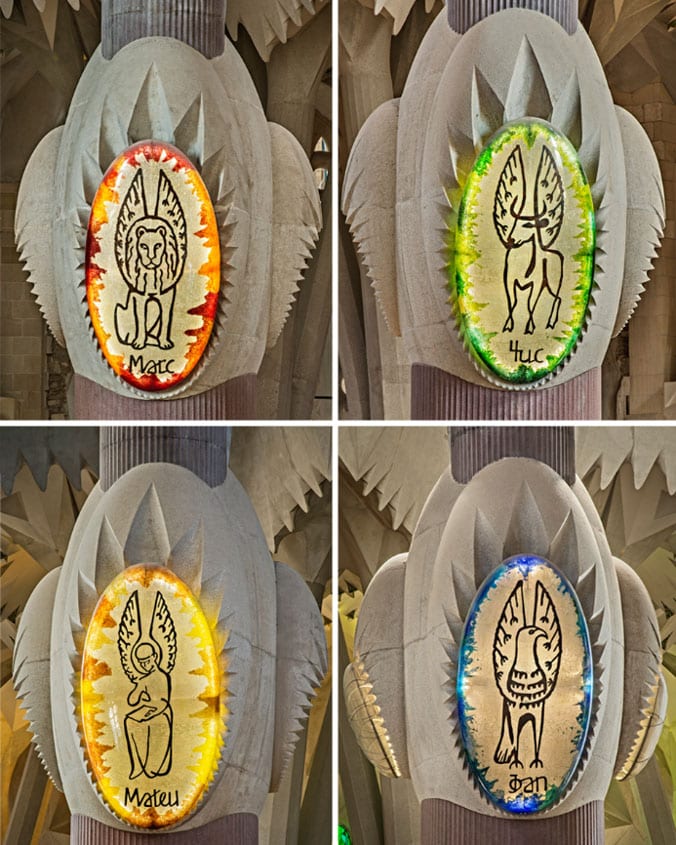 On the one hand, we have the dedication of the four columns on the crossing to the four Evangelists, which can be seen clearly in the main lamps with the knots where the tree-like columns branch out. These lamps face the centre of the Temple and feature the winged figure and name of each of the Evangelists on their translucent, colourful faces.

On the other hand, outside, four of the central towers are dedicated to the Evangelists. The pinnacles of these towers, which are currently being made, will have the clearest representation of the four figures of the tetramorph.

The oldest Gospel, and father of the others, is the one written by Mark, which begins with John the Baptist’s sermon in the desert, baptising with water but warning that he will be followed by one who baptises with fire, referring to Jesus. This explains why the strength of the lion, the king of the animal kingdom and also a symbol of Jesus’ royalty, has always been associated with Mark.

The Gospel according to Luke is the most human, in the sense of earthly humility and poverty. He is the one who speaks about the shepherds who adore the baby in the manger, of sacrifice and burden. This is why he is represented by the bull, the most recognised beast of burden.

The Gospel according to Matthew was written by an educated man who knew all about the ancient sacred texts, as can be seen in the constant warnings. It is a near-perfect Gospel in great detail from the beginning, when he describes the genealogy of Jesus from Abraham through Kings David and Solomon, so this divine perfection is represented in the human figure, as God made mankind in his image. Nevertheless, as it has wings like the rest, it looks like an angel.

The final Gospel, according to John, is the most abstract and theological. It stands above the rest in terms of wisdom, as it seems to be looking down from heaven. This is why the eagle is the figure that has always represented him. 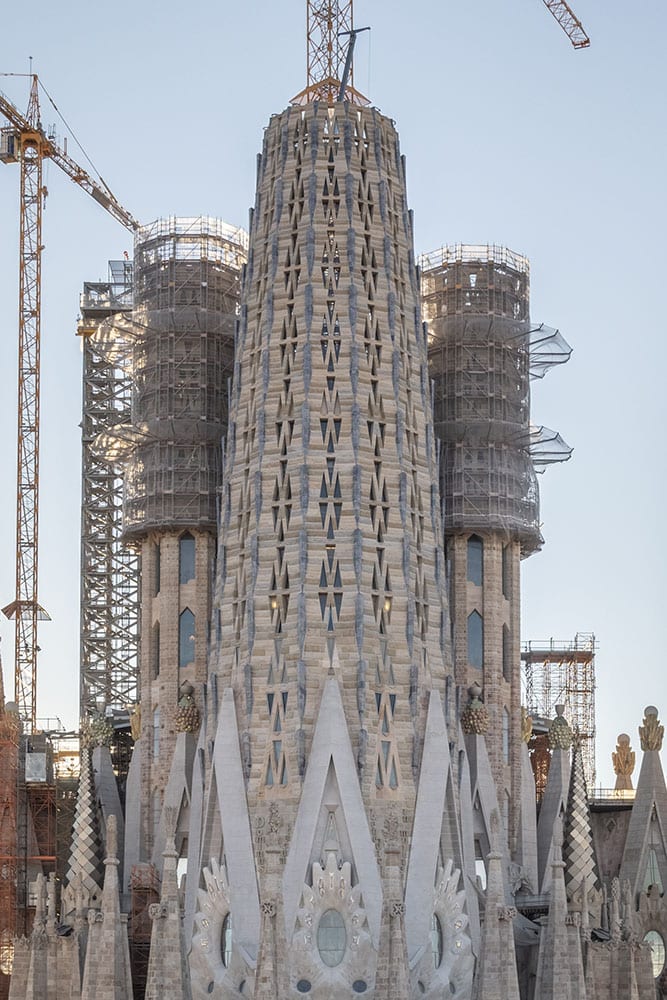 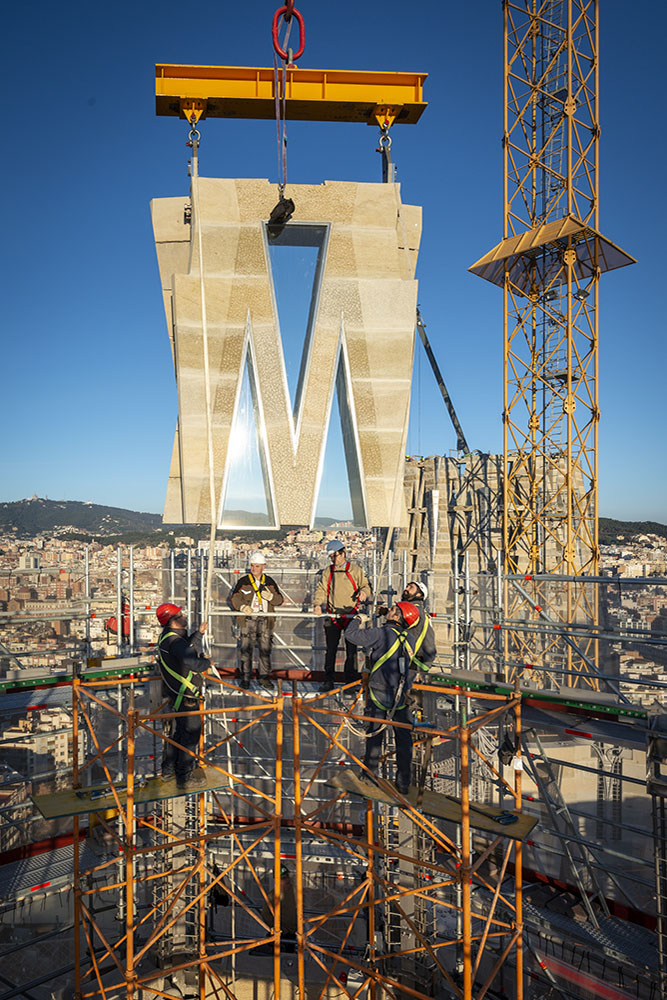 So, inside the Temple we can already see the winged figures that represent the Evangelists. And, it is only a question of time before we can also see them on the outside, with the figures of the tetramorph on the pinnacles of the towers of the Evangelists.