Warning: Use of undefined constant ‘bwp_template_redirect’ - assumed '‘bwp_template_redirect’' (this will throw an Error in a future version of PHP) in /home/customer/www/blog.sagradafamilia.org/public_html/wp-content/themes/blog-sagrada-familia-v2/inc/security.php on line 115
 The empty tomb

Gaudí designed the western façade after a scrape with death due to an illness with a very high fever that took him to Puigcerdà to convalesce and recover. This experience, as he himself explained, imbued him with the feeling and suffering necessary to design a façade where he wanted to express the final hours before the death of Jesus. So, the lower section has scenes of the path to Calvary, popularly known as the Via Crucis, and the upper section shows Christ resurrected and rising up to heaven, at the height of the bridge, which the statue hangs from. All of the figures in these scenes were sculpted by Josep Maria Subirachs, the first ones in stone and the last in gilded bronze.

The Resurrection, however, has so far been represented in a more abstract manner, in the huge elliptical rose window by stained-glass artist Joan Vila-Grau. But work is now under way on the sculptures depicting this extremely important, special scene in a more explicit way. It will be in the centre section, under the upper narthex on the Passion façade, where the steps of the staircases on either side come together and continue up, between the two columns or central bones with the elliptical rose window in the background. In this case, the artist commissioned to create them was architect and sculptor Francesc Fajula. The great importance of this scene, almost above any other within the Christian faith, is clearly seen in its place as the first Glorious Mystery of the rosary.

Gaudí worked intensely on the topic of the Resurrection of Christ, and especially when he was commissioned to work on the project for this station of the cross for the Monumental Rosary of Montserrat and the Holy Cave. Then, Gaudí created a unique group of dramatic, almost theatrical figures placed at various distances around a natural cave he chose to use and had enlarged for this purpose. Inside the cave there is an empty tomb and the angel’s words:

“Don’t be alarmed; you are looking for Jesus of Nazareth who was crucified; he has been raised and is not here.”

Jesus, in bronze, is outside the cave, hanging from the rock as if he were flying over the entrance and, to one side of him, the senyera (coat of arms of Catalonia) and the text identifying the symbol of all resurrection.

At the Sagrada Família, the scene is centrally placed above the other stations of the Via Crucis, as Isidre Puig i Boada described in his first book on the temple from 1929. In this text, the architect, who years later became the director of the works on the Passion façade, explained how Gaudí wanted to take advantage of the depth of the shadow from the upper narthex for the empty tomb:

“In the space between the columns, a staircase as deep as the lower porches runs up to the great window on the crossing (…). The tomb will be on this staircase (…).” 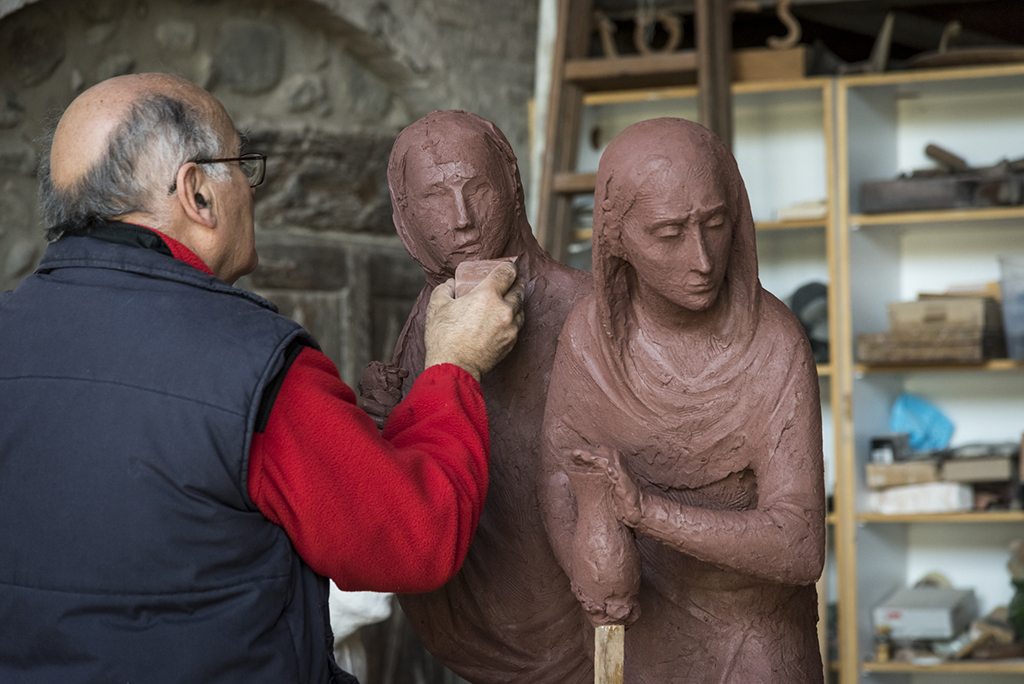 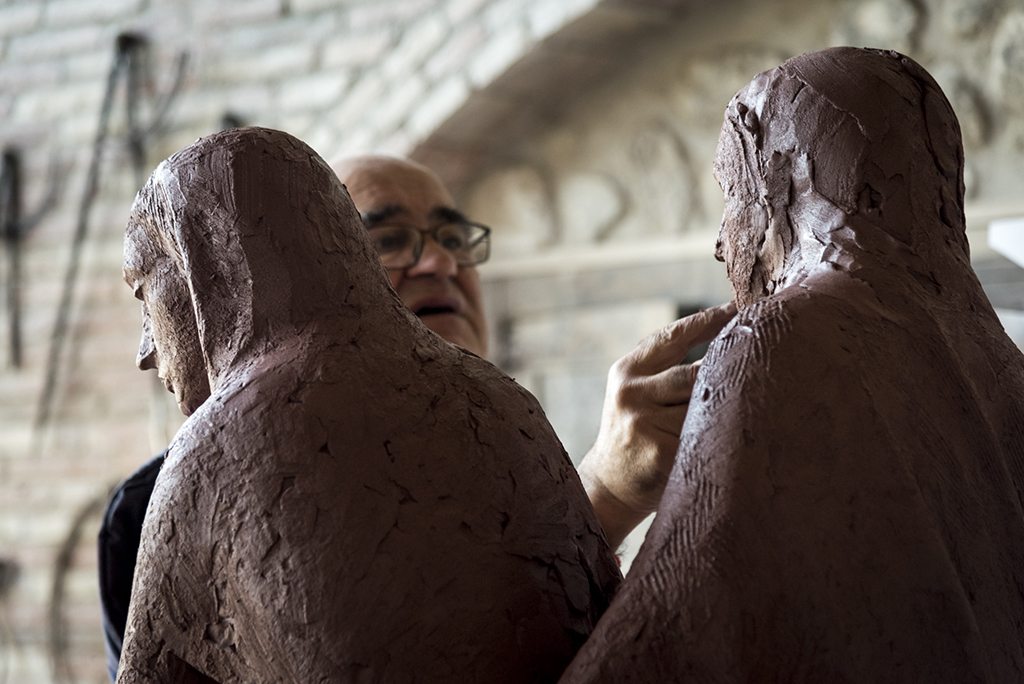 Francesc Fajula put the tomb in the centre of the scene, like a hole, and the stone that had covered the entrance has rolled off to the right. Above the round stone, he put the angel with one hand pointing down to the tomb, which Jesus rose from, and the other hand high, pointing to the stained-glass window depicting the resurrection. On the other side of the tomb, to the left, he put the first of the three Marys, Mary Magdalene, nearer and so with closer ties to Jesus, with an expression of surprise, sorrow and joy all at once. A bit behind her, forming a single block, the other two Marys with the unguent jars. As all the statues are behind the columns, you have to walk along the pavement in front to see them, in motion. So, they seem to appear and disappear as the whole group comes together against the backdrop of the rose window.

With the design phase complete, going from clay scale models to in situ tests and corrections with full-scale templates, work is currently under way on the final sculptures. As is common with this type of sculptural projects, the model has been scanned, the scale adjusted and the blocks have been roughed out mechanically, leaving the work well advanced so the artist can focus on the textures, expressions and final finishes. Francesc Fajula is sculpting the pieces in the stonemasons’ workshop on the temple grounds. The first sculpture, of the Angel, is nearly ready. He sculpted it between July and September this year. It is divided into two large blocks, plus the raised arm as a third, separate piece that will have to be attached to the rest. The finished sculpture weighs 3.8 tonnes in all. Since October, Fajula has been working on the Marys. This is the biggest block and, once finished, will weigh roughly 5 tonnes. The third piece, of Mary Magdalene, will weigh approximately 3.3 tonnes. All of the sculptures are three metres tall and split in two at the waist. The whole group of sculptures is expected to be put in place in March 2018. 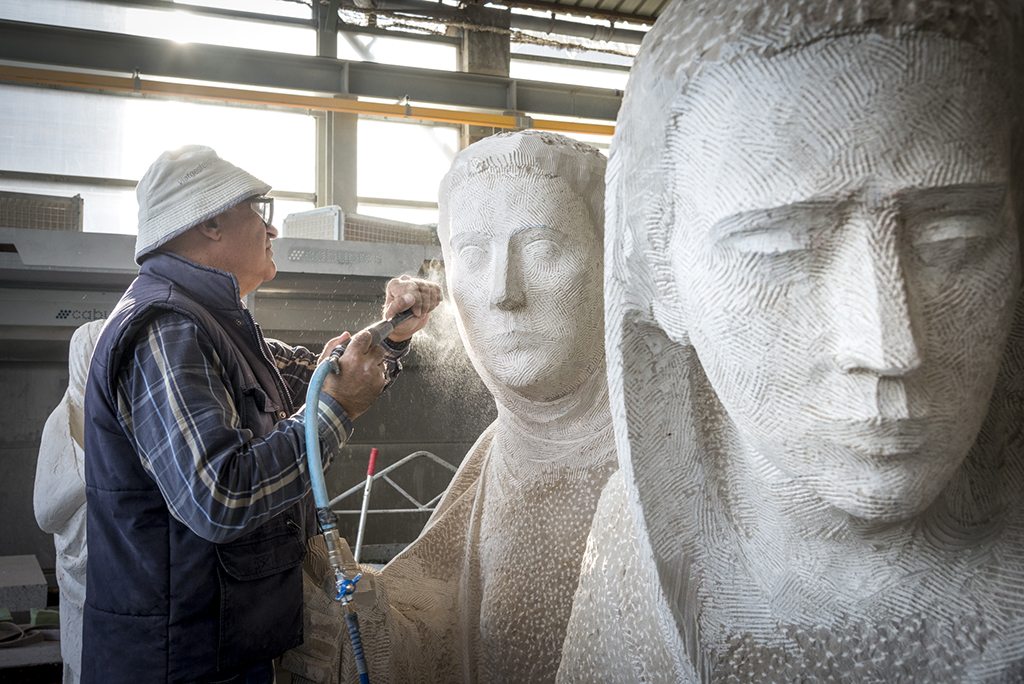 THE MEANING OF THE MATERIALS

For the sculptures in this group, two different types of stone have been chosen, once again. The first is travertine and the second, Floresta stone (Lleida). Subirachs did the same to establish a hierarchy of importance and highlight the central axis of the façade, which sets a soaring pace upwards. This is why he used travertine to highlight Christ, on the ground; Veronica showing the cloth with the likeness of Christ, also located just above the centre axis; the moon, which explains the eclipse; and the dove of the Holy Spirit, at the very top of the façade on the upper point of the pediment. This material was also chosen for the four sculptures of the apostles, at the very top of the narthex. However, for the rest of the sculptures on the façade, Subirachs chose Floresta stone.

For the first scenes, which include the flagellation, the travertine used is from Granada. Now, however, classic Roman travertine has been chosen, from Italy. So, this lighter, more prestigious veined stone, more appropriate for highlighting the symbolism, has been used for the angel that greets the women and the burial shroud lying in the empty tomb. The rest, the three Marys, however, are carved in Floresta stone, putting them on another level like the rest of the sculptures on the façade. 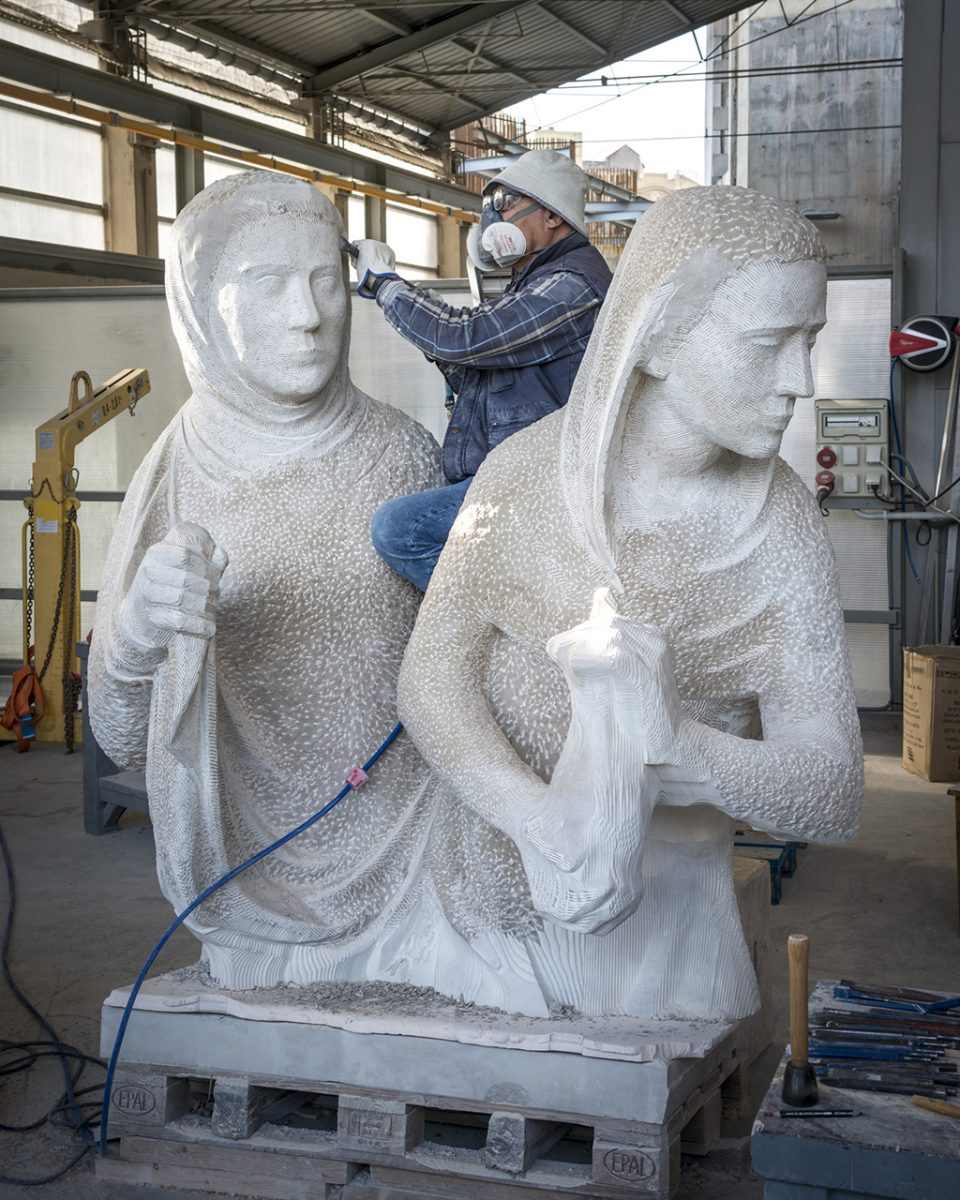 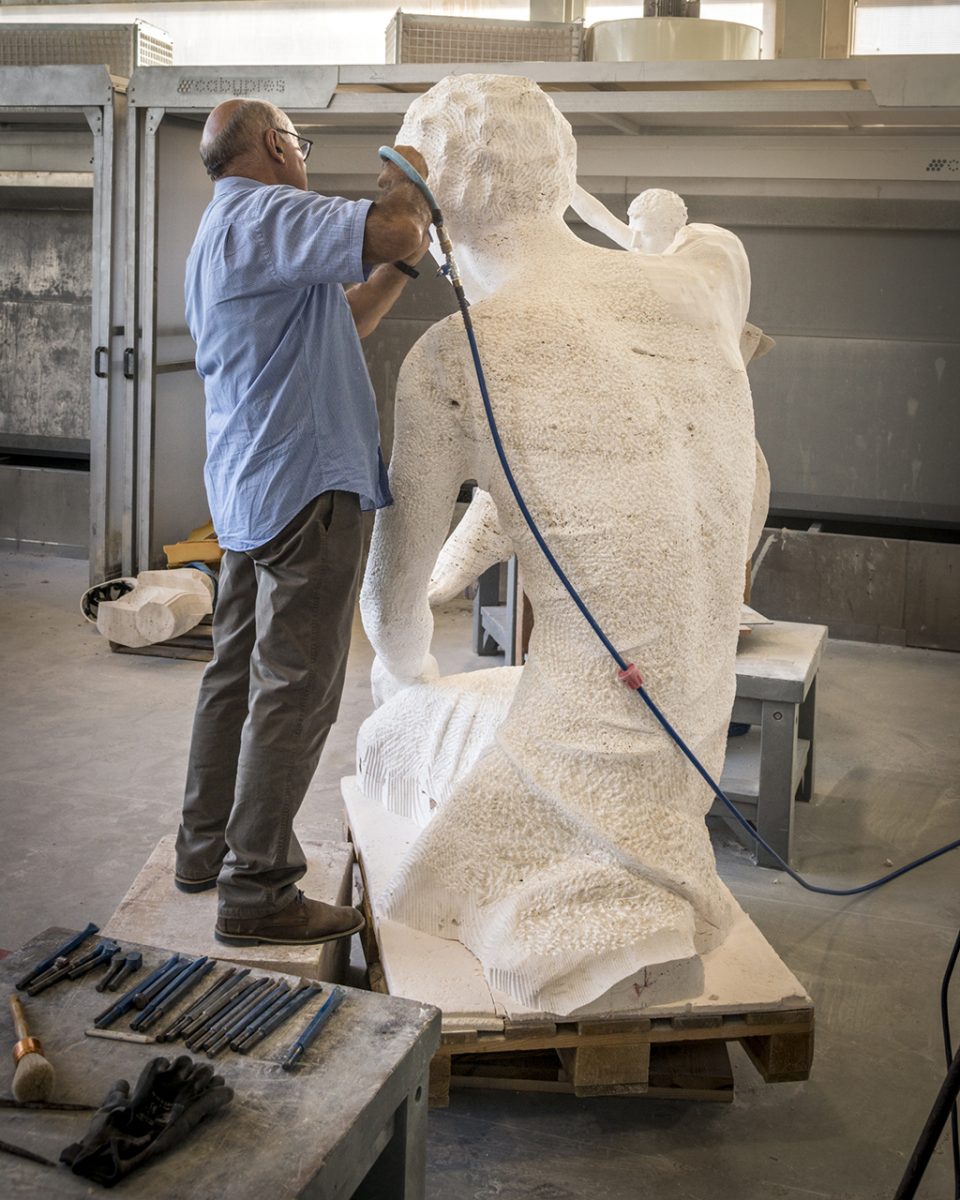