New Year’s Eve, a festivity held round the world, wasn’t always celebrated on 31 December. In Roman times, the year began in March, which is why September, October, November and December have names derived from the fact that they were the seventh, eighth, ninth and tenth months of the year.

The liturgical year, however, starts right now, with the first Sunday of Advent, which falls on 2 December this year. So, the previous week, Sunday of Christ the King, marks the end of the liturgical year, which Gaudí took into account when designing the Temple of the Sagrada Família.

In a previous article, we spoke in depth about the geometric basis of the columns. We also insinuated that, in addition to the great geometric, mathematic and numeric framework of their shape, the Temple columns also have meaning that goes beyond their structural and supporting function. Because Gaudí not only tied them to the dioceses of the world and the saints they are known for, but also dedicated each column to one Sunday of the year. Let’s see how.

There are exactly 56 columns in the Temple. In the apse, there are twenty: ten creating the curve that surrounds the altar and separates the presbytery from the ambulatory. In the crossing, there are sixteen: one for each of the twelve apostles and the four evangelists. There are two on each transept and in the nave, there are sixteen more: half flanking the central nave and the rest supporting the choir seating and separating the side naves.

In a first study published in the albums explaining the status of the project for the Temple, there is a plan that demonstrates Gaudí’s desire to tie the columns to each Sunday in the year. So, the ones on the Nativity side of the apse are dedicated to the Sundays of Advent and Christmas and, more or less symmetrically, the ones on the Passion side, to Lent and Easter. 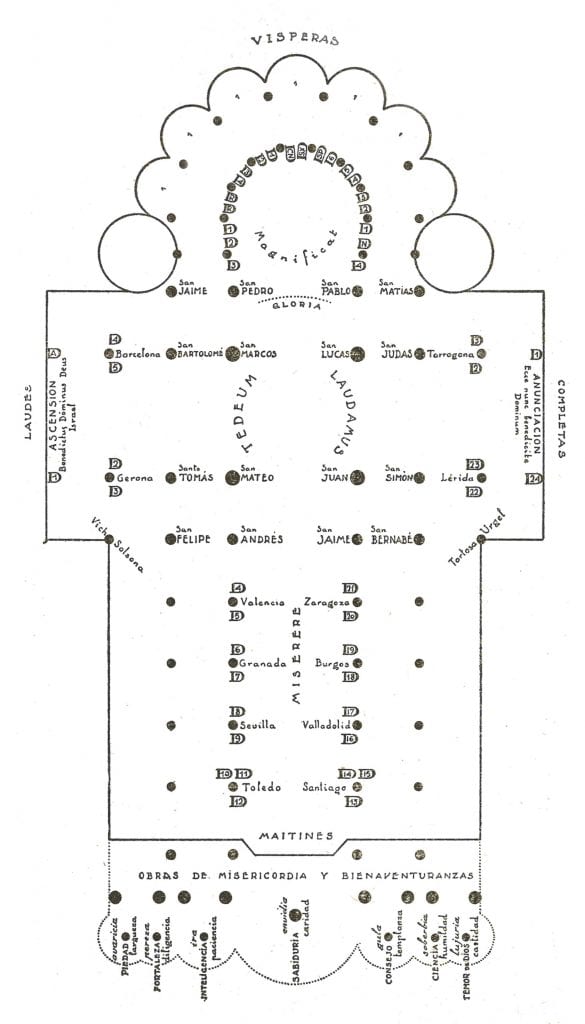 However, in this first draft, not all of the columns are labelled and those in the second row of the apse and the nave, as well as the sixteen columns of the crossing, don’t have a dedication. So, each of the chosen columns came to be associated with two or three Sundays. There are even a few Sundays that ended up not on columns but on wall pilasters.

Furthermore, this plan also shows Gaudí’s desire to highlight other particularly important days of the liturgical year, regardless of whether they fall on a Sunday. These include the Ascension, which is celebrated 40 days after the Resurrection and was placed on the Passion side of the transept, and the Annunciation, which normally takes place on 25 March and is found on the Nativity side. The proximity to the altar, to the central axes, or to the crossing, therefore, is a factor taken into account when highlighting these important festivities of the year.

It is important to note, in any case, that Christmas day, which is so important, only falls on a Sunday once every seven years and, as we have just seen, there are many other holidays throughout the year that are important enough to have a column, even though they are celebrated whenever they fall, whether or not it is a Sunday. So, connecting the columns with the 52 weeks of the year isn’t a simple issue. This is why the initial study has evolved and several plans have been published with variations on this symbology connecting the columns and the Sundays. 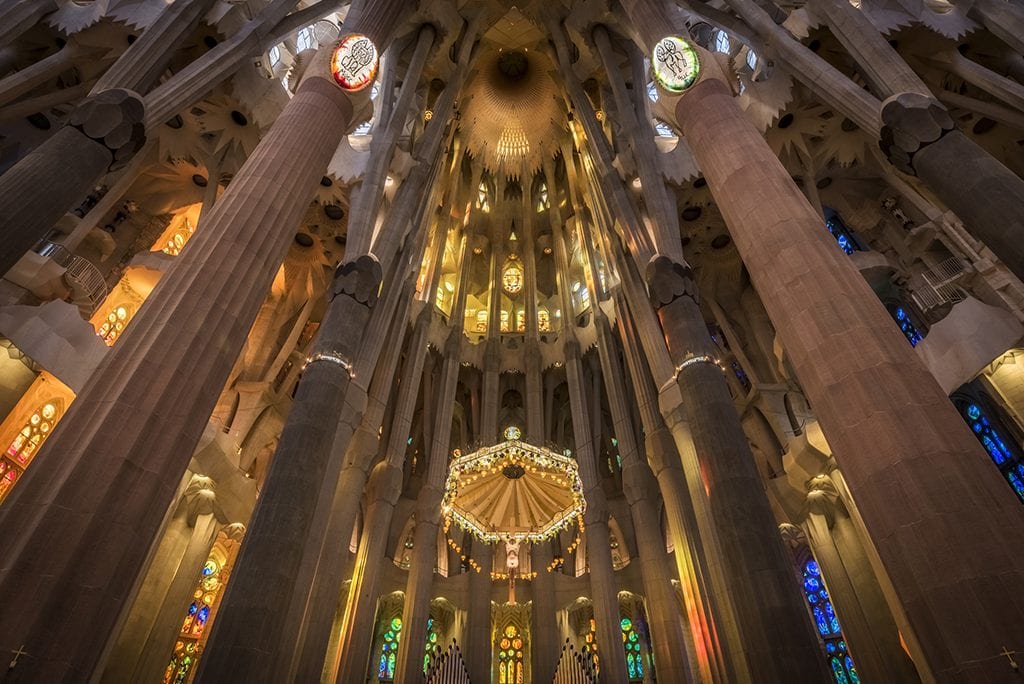 These plans take into account various factors. One of them is the fact that, in addition to the Sundays of Advent, Lent and Easter, there are normally 33 other Sundays in the year. These are called ordinary time and fall between Christmas and Lent, on the one hand, and between Pentecost and Advent, on the other. Likewise, there are important festivities that usually fall on other days of the week, and which must be given a coherent position in line with their importance. For example, the days associated with the Virgin Mary, such as the Assumption and the Immaculate Conception, could be placed next to the apse; the feast of Saint Joseph could go on the Nativity side, and the Ascension and Corpus, on the Passion side.

In any case, the root of the issue that is common to all of these interpretations is the desire to have representations on the Temple columns of the Gospels read at the celebrations throughout the year. This is so that visitors to the Temple who are interested in a spiritual path can stop at each column and identify the corresponding text.

However, if we add the aforementioned holidays to the Sundays of the year, we would need more columns. So, it makes sense to double or triple up the number of Sundays or holidays assigned to each one. Nevertheless, it is undeniable that there are 56 columns inside the Temple, which is the four evangelists and 52 weeks of the year when their Gospels are read.

Therefore, the sum of the evangelists and Sundays fits perfectly (52 + 4 = 56), as we see with many other things at the Temple. And this numeric equivalence between the number of columns and the weeks of the year shows how the columns became the way to represent the liturgical year we are now starting, and which Gaudí wanted to be present through the association of the columns with the Gospels that fill them with meaning.