After the seven weeks of Eastertide, meaning the fifty days from Easter or Resurrection Monday to Pentecost Monday, we wanted to turn to the baldachin on the main altar, inaugurated in 2010 with the consecration of the Basilica and the clearest representation of the Holy Spirit inside the Temple.

Pentecost literally means fifty days and it can be said that Jewish tradition already celebrated these fifty days from when Moses received the Tables of the Law on Mount Sinai. For Christians, the feast of Pentecost is very important because it means the arrival of the Holy Spirit and, in the art world, this has often been represented with tongues of fire above the heads of the apostles. With this gift from God, the apostles gained special powers to cure diseases, have the strength and bravery expected of them in the face of adversity, and, especially, the ability to understand and speak all languages and, therefore, spread the Gospel.

THE PRECEDENT, IN MALLORCA

The word baldachin comes from the city of Baldac, medieval Baghdad, which was the source of valuable silks often used to make the baldachins. It is a canopy, a cover, placed over kings’ thrones, which the Christian Church adopted to ennoble and honour the altar.

Gaudí left an excellent design sample for the baldachin meant to cover the main altar of the cathedral in Palma de Mallorca. That work, however, was left unfinished, like so many others Gaudí left around 1914-1915 to devote himself exclusively to our Temple. Nevertheless, the expression of the symbolic elements it was to contain had already been established. 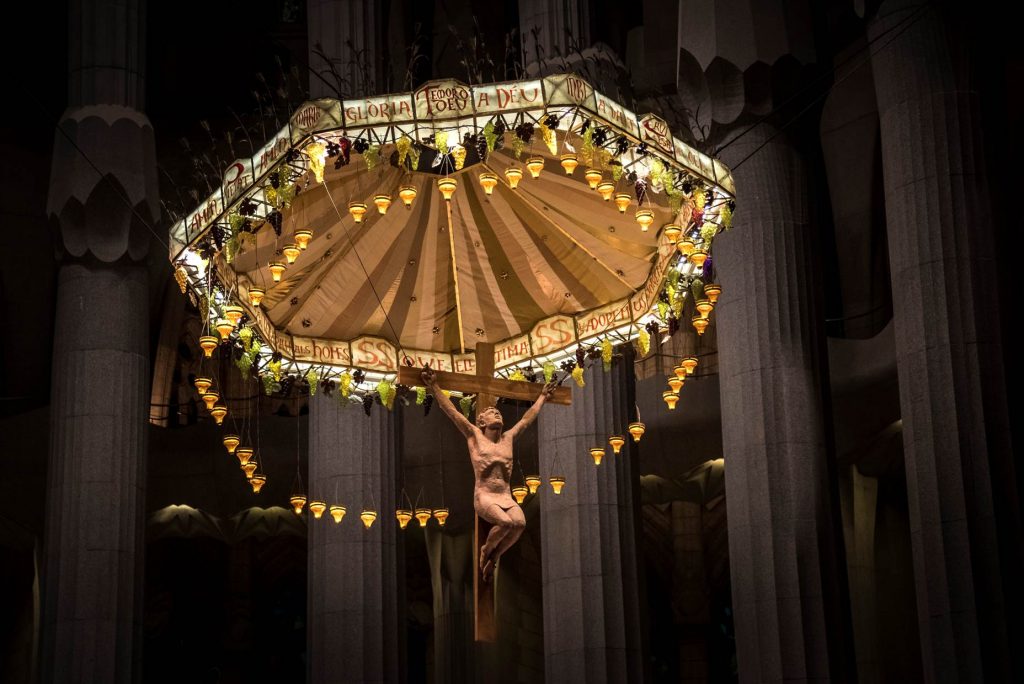 This is why it is heptagonal, representing the seven gifts of the Holy Spirit: wisdom, understanding, counsel, fortitude, knowledge, piety and fear of the Lord. The polygon is placed with one point facing the centre of the crossing, rising slightly in that direction. This central point is inscribed with the letters INRI, an unequivocal reference to Jesus Christ on the cross just below. The fabric canopy is gold and ochre tones, accentuating the radial, radiant meaning, and is covered in gold stars.

The structure of the baldachin is metal, giving the initial seven-sided polygon thickness and three-dimensional weight so that, when topped with translucent parchment, it can hide a lighting system to highlight the inscriptions. So, in the centre on each side, the seven gifts are listed. 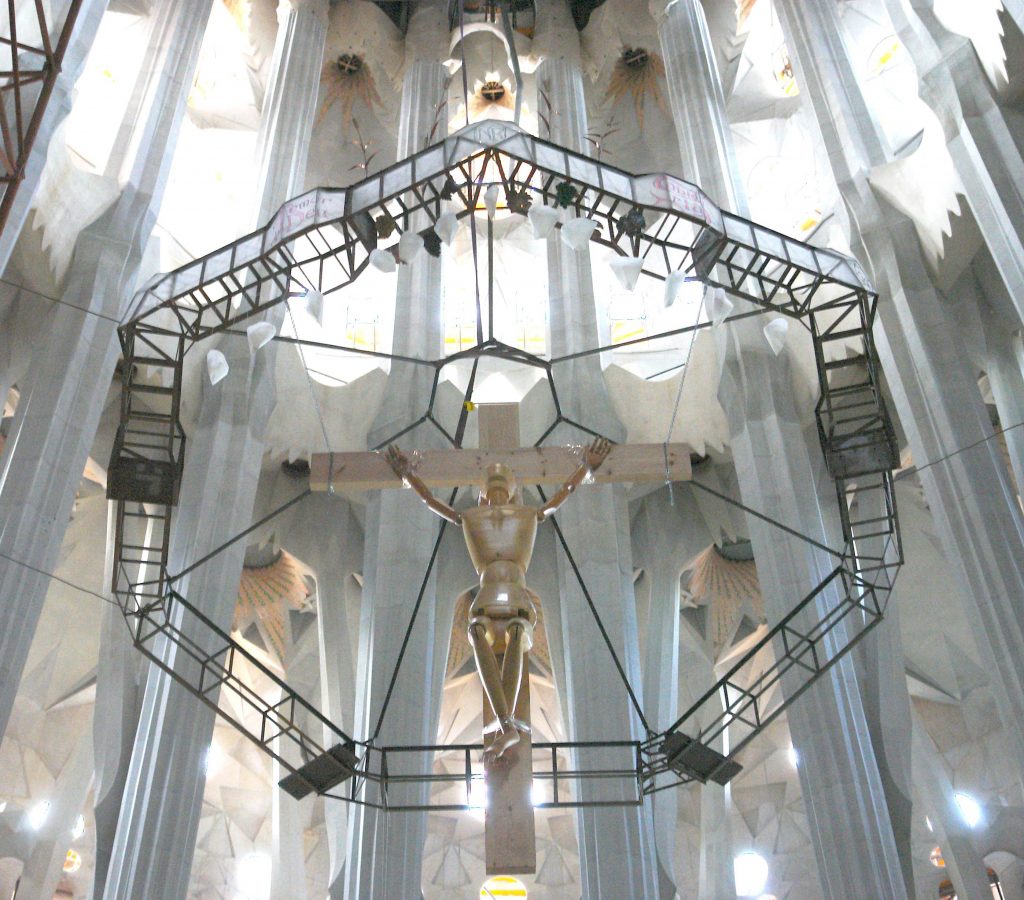 Above this structure are shafts of wheat, a symbol of the bread for the Eucharist, and below hang grapes in three colours, red, white and gold, a symbol of the wine of the Eucharist, in moulded glass, with interspersed grape leaves in brass. Further below, along the perimeter, seven lamps hang from each side. Plus one more on the main corner for a total of fifty lamps, representing the fifty days of Eastertide. 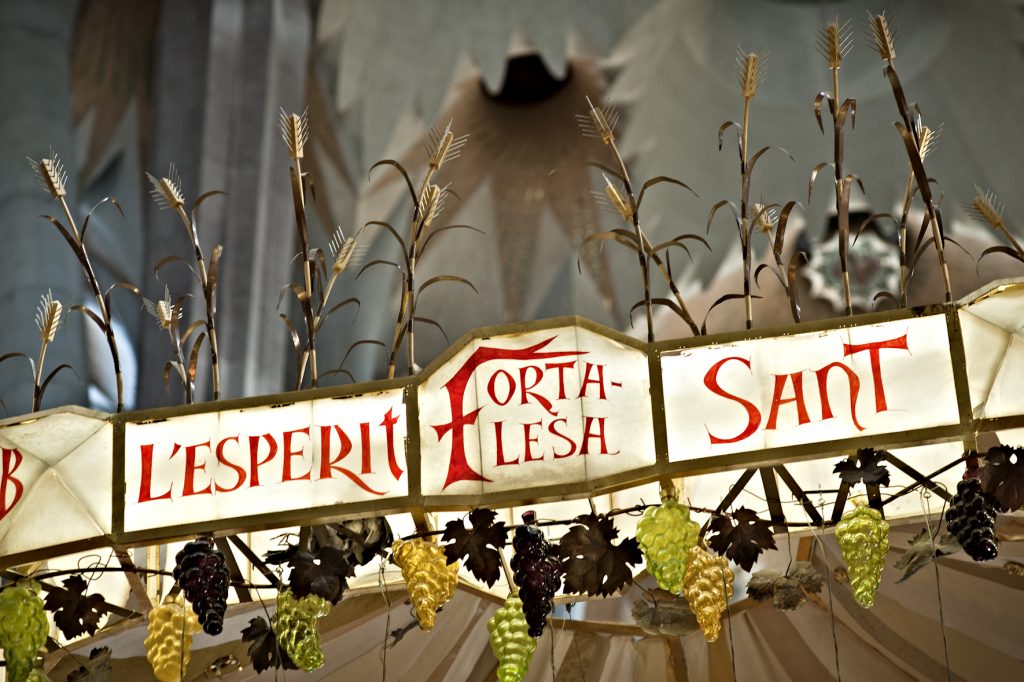 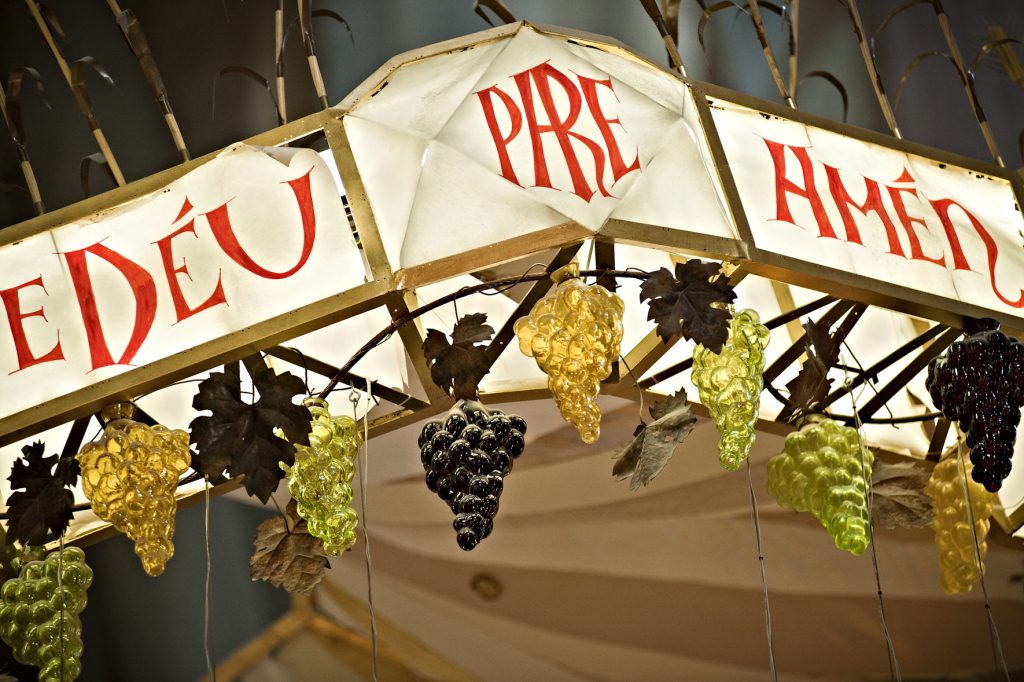 From the front, the names Mary and John can be seen on the sides, which with the INRI in the centre and Jesus on the cross complete the scene of the calvary.

The prayer of Glory fills the perimeter of the baldachin, both inside and out. In back-lit red letters and Gaudí-style lettering designed under Jordi Bonet, then head architect of the project, the whole beginning of the prayer of Glory can be read from the pews without having to move an inch. Then, the rest is on the sides, interior and exterior.

So, to read the whole thing, one has to move around the apse ambulatory. The text on the central shields on each side must also be skipped, as on the outside they have the gifts of the Holy Spirit and on the inside, the initials SS, for Spiritus Sanctus.

The whole baldachin hangs from two basalt columns aligned with the altar, dedicated to Saint Peter and Saint Paul, and for the anchoring a large bracket was designed to grip these columns, which have references to these two important apostles.

Finally, it must be noted that Jesus on the cross presides over the view from the whole main nave entering through the main door of the Basilica, on the Glory façade. So, along with the sculptures of the Virgin Mary and Saint Joseph that preside over the views of the transept, this completes the three members of the Holy Family.