To calculate his structures, Gaudí innovated with the empirical, experimental method of suspended chains. By inverting the image, he got the best geometry for the project, meaning the angle the columns and walls should have to withstand compression forces. Furthermore, this also allowed him to measure the force on each chain or string pulled taut with a dynamometer, which gave him the diameter for the columns or nerves depending on the scale used and the strength of the material.

He applied this technique in a study for the church at Colònia Güell with the collaboration of a full team of professionals, including his right-hand man Francesc Berenguer, architects Josep Canaleta and Joan Rubió, Alsatian engineer Eduard Goetz, and photographer Vicenç Villarrubias. Gaudí’s method consisted in modifying the weight on the strings to see how the project’s arches and vaults changed. This way, the inverted model was used to design the project, with drawings from the photos he coloured himself. This experience with the funicular model at Colònia Güell served as the basis for the calculations for the Sagrada Família, as Gaudí himself recognised.

Nevertheless, with all this attention paid to structural behaviour through the weight of different materials, meaning the building’s permanent vertical and gravitational loads, the wind loads and seismic forces were somewhat forgotten. While the first loads are vertical and static, like gravity, the latter are horizontal and dynamic. So, the method using strings and weights didn’t work.

The texts of Gaudí’s disciples tell us that the master took wind forces into account when building the Temple. However, we believe these considerations must have been calculations or tests done in addition to the funicular model, which is essentially static and gravity based. The truth is that structural calculations in Gaudí’s time weren’t regulated as they are now. Today’s requirements for tall buildings, like the Temple, are much stricter than Gaudí could ever have imagined. In fact, nowadays it is unthinkable to calculate the wind resistance of a building that stands 170 metres tall with just complementary verifications, as the calculations to ensure a building withstands horizontal forces from wind loads are as important in designing and fitting out the structure as the building’s own gravitational loads. 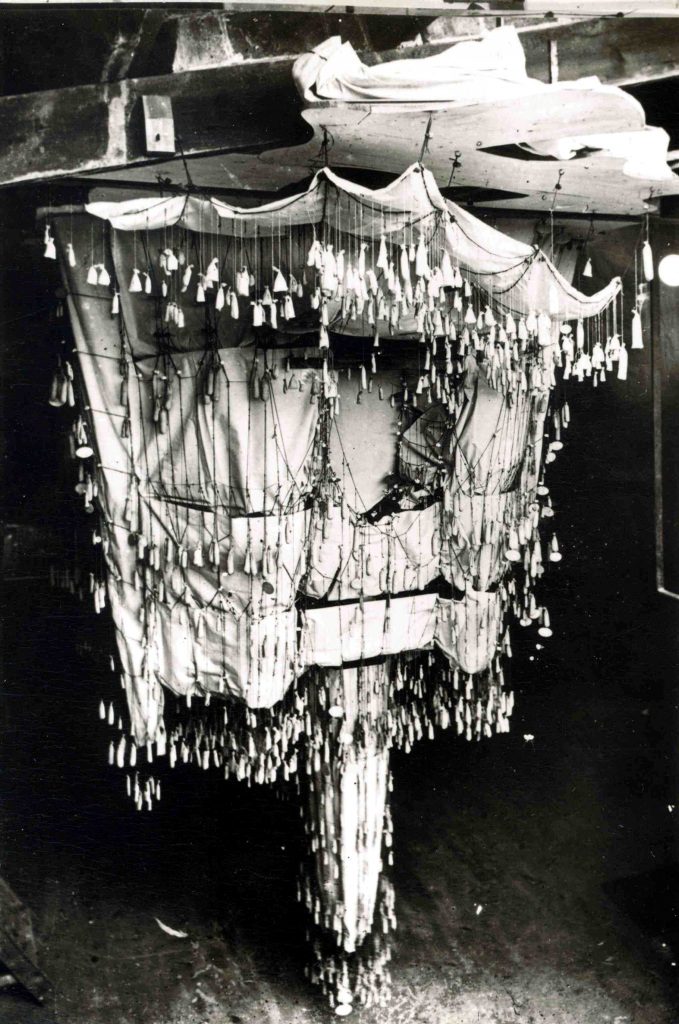 We can see, then, that weight is a vertical force that Gaudí tested with the hanging models and that earthquakes and wind loads are horizontal forces that push the building from the side, trying to bend it. For example, for wind calculations, the dynamic force is normally equated to a static force, the maximum foreseeable, acting horizontally and spread throughout the exposed part of the building.

For an earthquake, the horizontal forces don’t hit the part of the building above ground, but act directly on its base, meaning the foundations. It is a horizontal jerk that can change directions in just seconds, moving back and forth several times. This shaking makes the whole building vibrate, bending it like a rope being shaken from one end, which means the opposite end is the one that moves the most.

If we consider that the wind can blow from any direction, it becomes clear that the calculations of wind loads and seismic forces are closely related. This is why earthquake loads are normally calculated as if they were a static horizontal force, increasing the level according to the seismic degree of the area where the building is located.

These calculations often show that the taller the building, the more the movement is increased at the very top. From this standpoint, we can say that the part of the building furthest from the base is most at risk.

To better understand this, we can imagine a pyramid: horizontal vibrations won’t move the tip much, because the base is so wide in comparison. However, an inverted pyramid, with a higher mass on top of a weak mast, would easily start vibrating like a pendulum and the weakest part, the mast, could fail.

Given this fact, it is understandable that this must be taken into account in the calculations for the Sagrada Família, as the Temple has an open ground floor, with only the tree trunks that branch into numerous smaller arms to hold up much heavier vaults. Plus, on top of these vaults are the central towers, which are three times taller than the vaults they sit on. The mass is far from the ground and, therefore, the effect of the vibration from an earthquake must be taken into account. 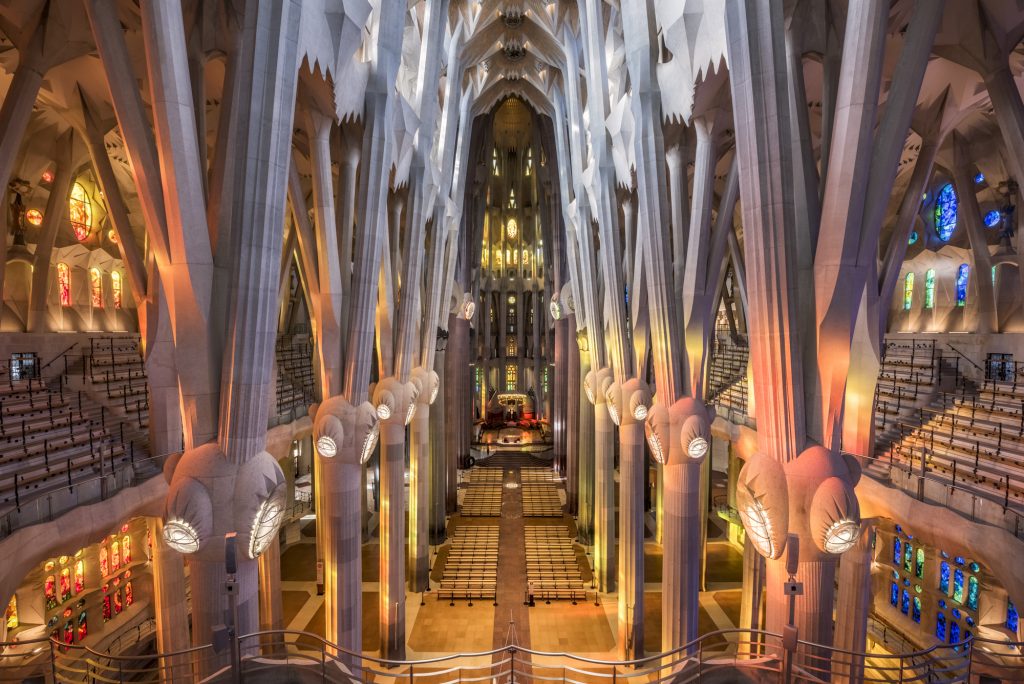 WHAT IS THE RISK OF EARTHQUAKES IN BARCELONA AND CATALONIA?

The earth’s crust is made up of tectonic plates that move around and interact. Scientists have established a number of main plates, which more or less correspond with the continents, as well as smaller ones, like the Iberian plate. This plate is moving away from the American plate on one side and pushing up against Italy and Sicily, the African Atlas Mountains, on the other, and rubbing against European plate at the Pyrenees. This explains why the Pyrenees region is quite active, with volcanoes and a higher probability of seismic activity.

Nowadays, to detect earthquakes we use sophisticated electronic seismographs that can sense the smallest movement of the earth, whether at the surface or any depth. However, these tools are relatively recent. This is why, to determine a region’s seismic level, regulations look to chronicles and stories describing the damage caused by seismic activity throughout history. So, the map of seismic risk for Catalonia from 1997 put the Barcelona region at VI to VII out of a maximum of XII. This classification is highly conditioned by the 1428 earthquake that, with its epicentre in the Catalan Pyrenees, caused some thirty deaths in the city of Barcelona. 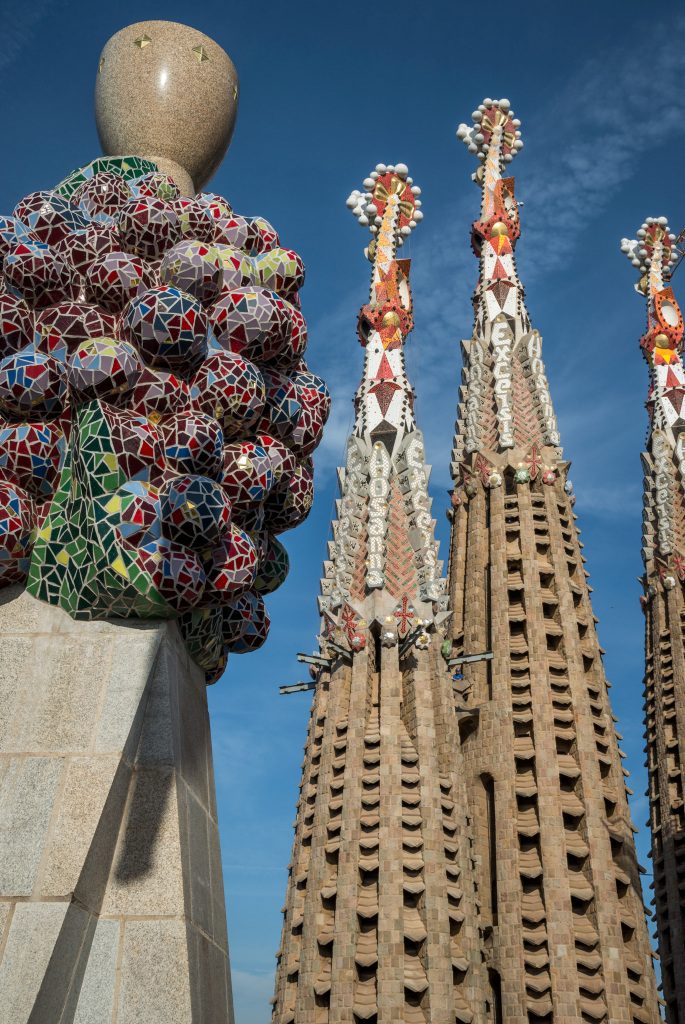 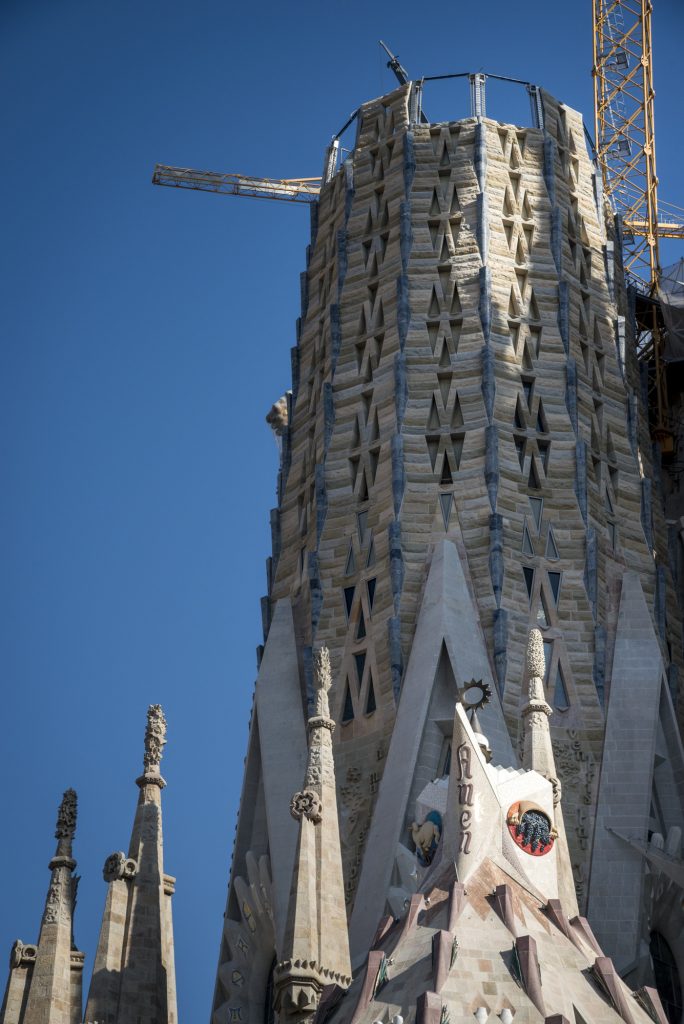 When Gaudí came on board as the architect of the Temple, the foundations for the crypt had already been laid, reflecting Villar’s project, which was much smaller. So, as the project became taller with the great lantern of the Virgin Mary above the apse, and taking into account the new weight and the effects of wind and earthquakes on the tower, these original foundations had to be seriously reinforced, with works in the crypt for two years (2007-2009).

Likewise, the issue of seismic activity was clearly present in beginning construction on the foundations for the main nave and transept in 1988. The crossing that supports the central lanterns we are now building, therefore, is within this area that sits on the new foundations, made with reinforced concrete pylons that are 20 metres below ground. For these calculations, we used static approximations of earthquakes according to the 1974 Spanish Earthquake-Resistant Construction Standards.

Later on, the structural analysis was refined. For accurate seismic calculations, it is very important to determine the acceleration the structure will be subjected to, as force = mass x acceleration. So, in recent years, dynamic analysis has been used with a series of virtual simulations of how the ground moves and makes the building vibrate.

Also in this line, a study was conducted on site of the Temple vibrations, analysing the frequency of the structure built so far to allow for better calibration of the model for the seismic analysis.

Furthermore, as construction of the building has advanced over the years, all of the structural elements have been defined more precisely and, therefore, it has been possible to update the model of the building. The model has been recalculated with the new data in order to ensure, among other things, that it can stand up to seismic activity. So, with the beginning of works on the central lanterns in 2014, the general structural model of the Temple was updated with the geometry, mass and stiffness of all the existing structural elements, as well as the structure in the tower project. Furthermore, to make it even safer, a specific study was carried out to determine how an earthquake would affect the towers.

Taking all of this into account, we can draw the conclusion that seismic activity has been properly taken into account in the calculations of the Temple structure, with the analysis necessary for it to withstand an earthquake, as established in current standards for our region.