The feast of Saint Joseph is an important day for the Sagrada Família for several reasons. Firstly, because it was the Asociación Espiritual de Devotos de San José that initially promoted the idea of building a temple in Barcelona devoted to the Holy Family. In addition, the cornerstone of the Temple was laid on 19 March 1882 and the central chapel of the crypt was dedicated to the patron saint on 19 March 1885. As the project evolved, the presence of the Holy Family gradually expanded, coming to exalt Jesus and Mary as its central figures, with Gaudí dedicating the two tallest towers at the Temple to them. So, Saint Joseph, who played a big role in Jesus’ childhood but was absent from his passion, is seen mainly on the Nativity façade. He is also present inside the Temple, on the Nativity transept, and will be on the Glory façade in the future. So, let’s take advantage of the feast of Saint Joseph to look back over all the sculptures that represent this figure on the Nativity façade of the Temple.

Many Gothic cathedrals divided the façade into three large portals with sculptures devoted to local saints or biblical and evangelical events. At the Sagrada Família, however, Gaudí takes this one step further with a sort of synthesis of all the previous art on the Nativity façade, where he associated each portal with two ideas. So, on the one hand he links them with the three theological virtues of faith, hope and charity; and, on the other, with each of the three members of the Holy Family. This way, the central portal is dedicated to the virtue of charity and to Jesus; the portal on the left, to hope and the Virgin Mary; and the one on the right, to faith and Saint Joseph.

The portal of Saint Joseph is crowned with a monogram of his name, which has a seven-pointed star with a J made of wood shavings. On top, there are flowering tuberoses, which are always associated with the saint, remembering the flowering staff that identified him as Mary’s future husband, and on the bottom hang bunches of grapes. But Saint Joseph also appears in two sculptural scenes. On the top, in a loge, there is the Presentation of Jesus at the temple, where Joseph and Mary are watching the priest bless the newborn baby in their arms, showing their faith in the prophecies that would later come true. On the bottom, we see the group with Jesus preaching at the temple, which shows Saint Joseph and the Virgin Mary surprised to find their lost son preaching to the doctors of the law. 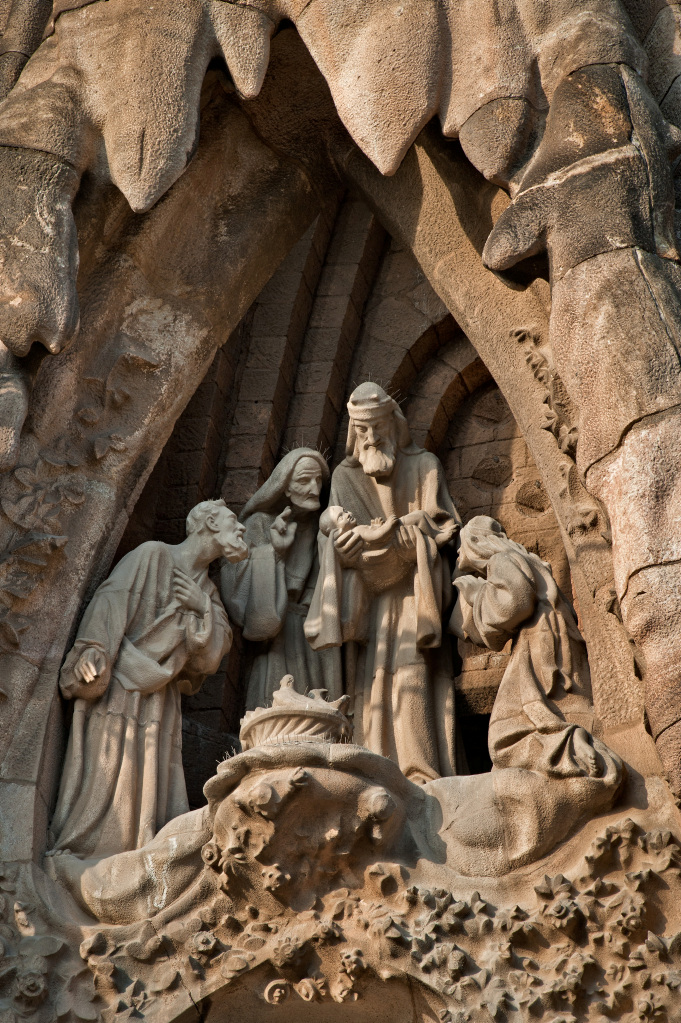 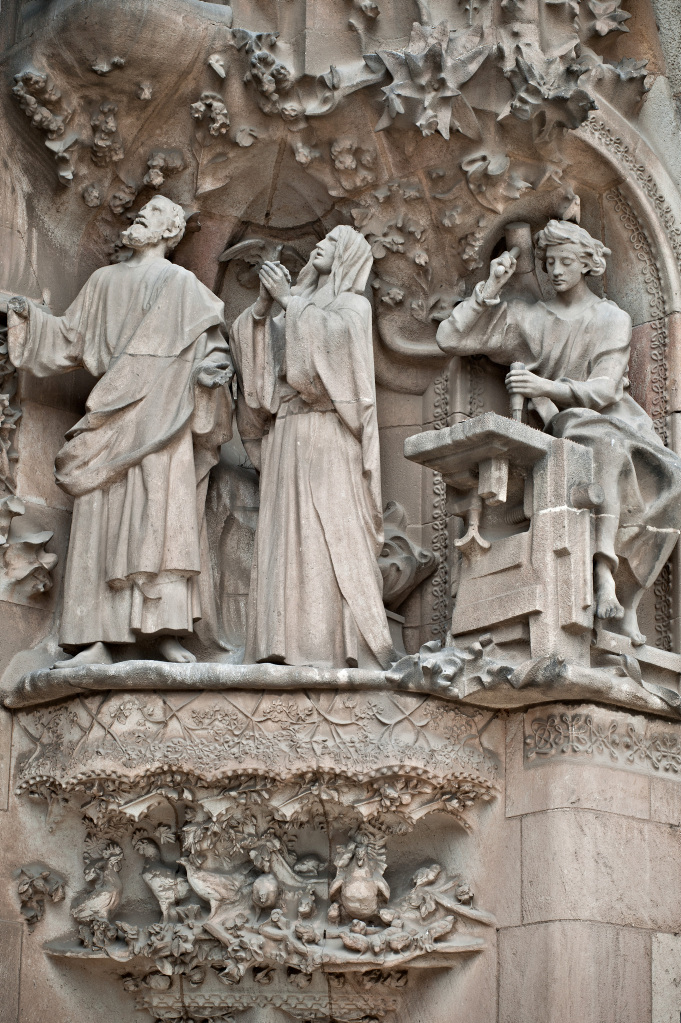 So, on this other portal, crowned with Mary’s monogram, an M on top of a Stella Maris and a ducal crown, we find Saint Joseph and Jesus, now a child, in the central sculpture group of the child showing his father an injured dove. The scene is on a border made of carpenter’s tools, another reference to the saint. Saint Joseph is also in the scene of the Flight into Egypt, on the left side of the portal, with Mary on the donkey with Jesus in her arms. And, further up on the upper loge, we see the scene of his betrothal to Mary. Finally, in the loge just below the pinnacle dedicated to Montserrat mountain, with the patron saint of Catalonia, we see the sculpture group of Saint Joseph’s boat, which shows him steering the ship of the church through the water. 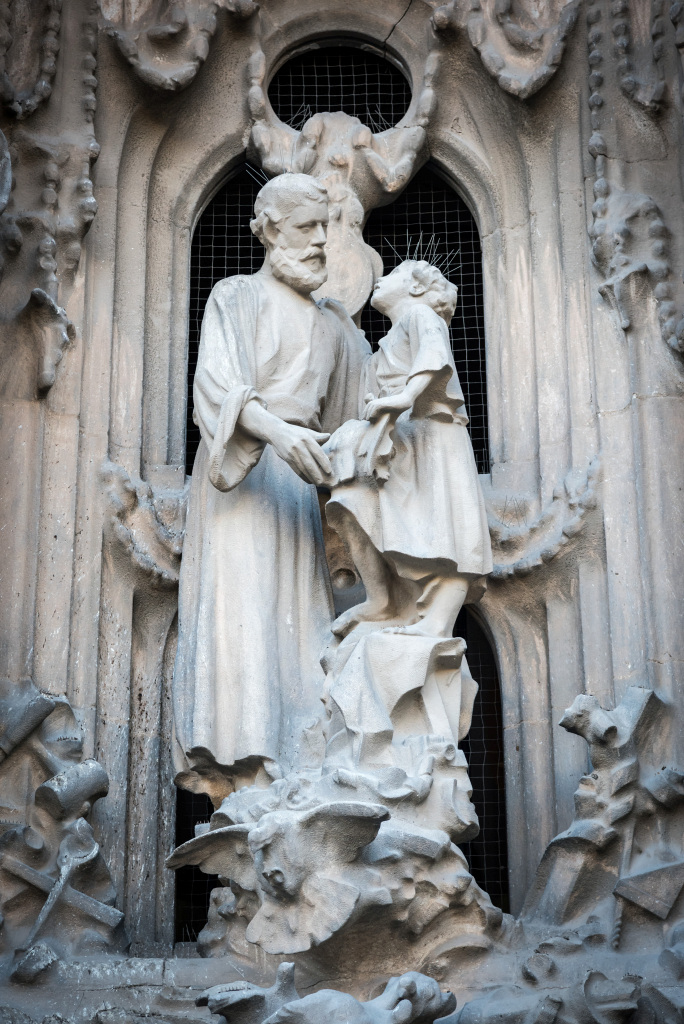 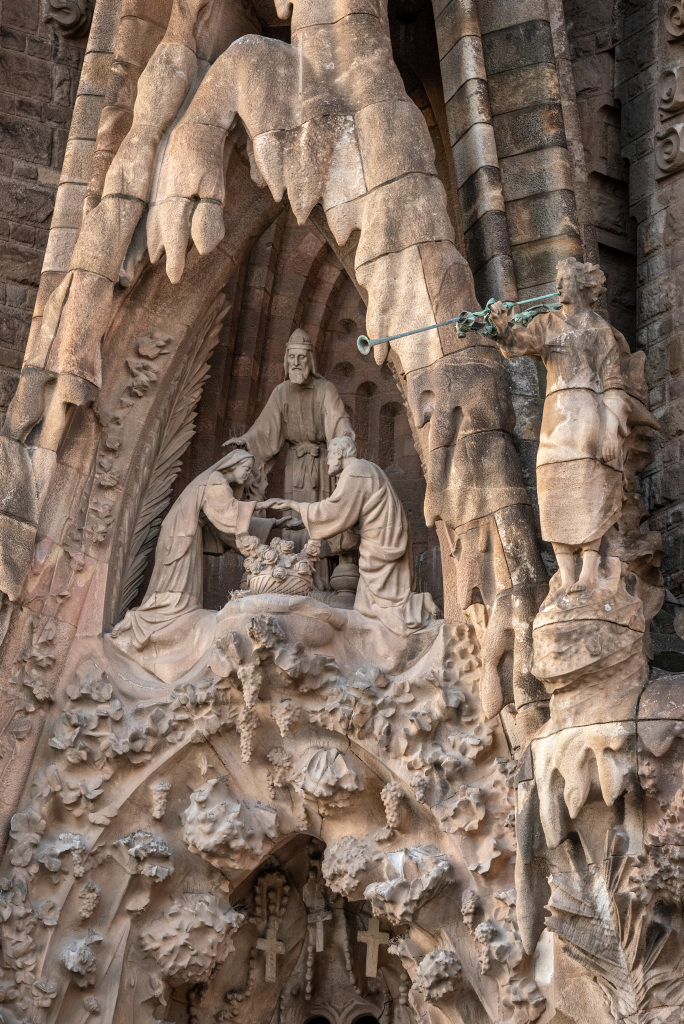 Gaudí also balanced the presence of the Virgin Mary and Joseph on these portals by putting Mary’s name on the column on the right side of the façade, the side of faith, and the name Ioseph on the left, the side of hope.

Saint Joseph also appears in two other scenes, in this case on the central portal on this façade, dedicated to charity. He is, naturally, in the scene of the Nativity, standing and looking at the baby in Mary’s arms, in front of two animals, an ox and a mule, which stick their heads out on either side. Furthermore, as we mentioned in a previous article on the loge of the Coronation, in the central portal on this façade, Gaudí chose Saint Joseph, and a humble shepherd, to bear witness to the scene of the coronation of his wife, Mary.

So, counting the name Ioseph, in Latin, Joseph’s monogram and the eight sculptural representations we’ve described, this façade has a total of ten clear references to the saint who inspired Josep Maria Bocabella to found the Asociación Espiritual de Devotos de San José, which, joining the trend Pope Pius IX promoted in the mid-19th century, encouraging devotion to Saint Joseph, would promote construction of the Temple of the Sagrada Família. 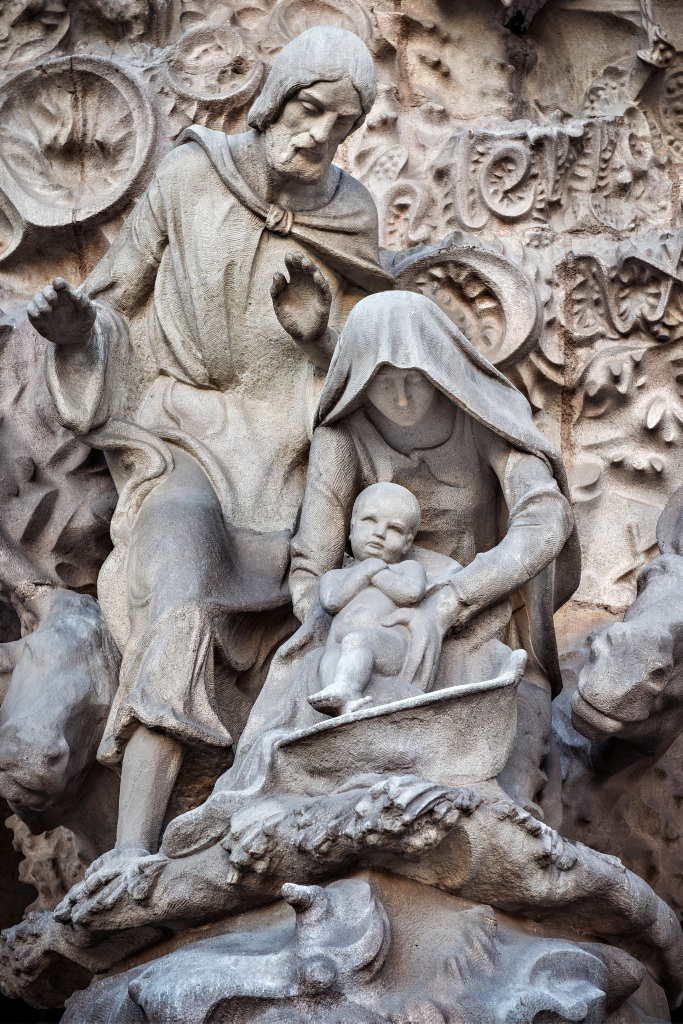 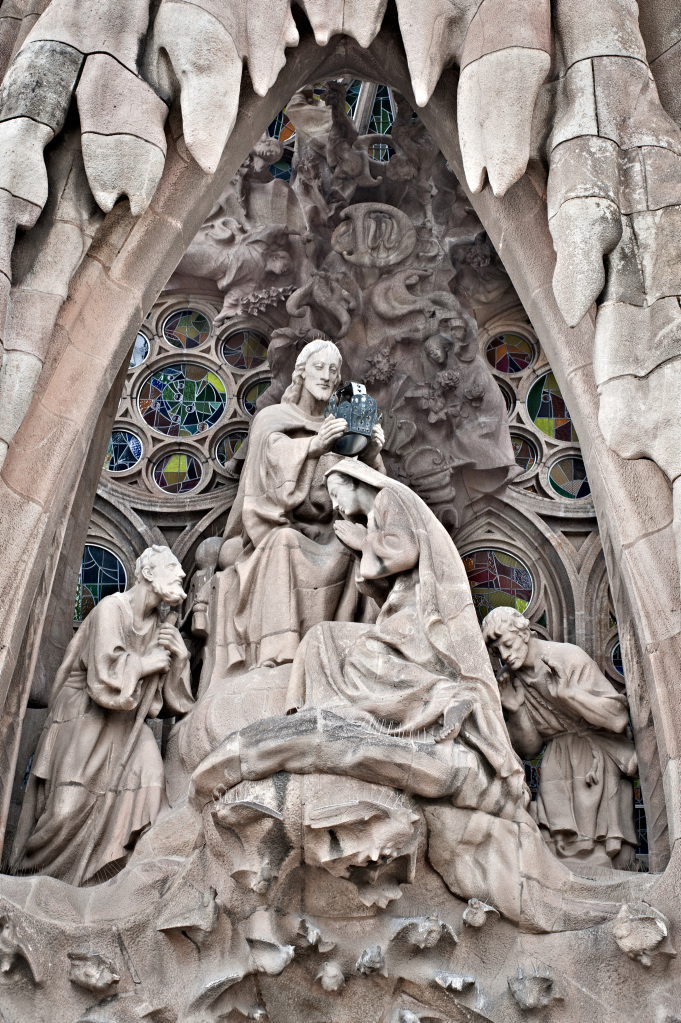