Since the beginning of October, visitors to the Sagrada Família have been able to enjoy the portal of the Rosary, a small architectural gem that Gaudí left finished in 1897 to serve as a guide for those who would continue the project after he was gone. This is particularly important for the Technical Office, which strives to stay as true to the original project as possible. To celebrate that this part of the Temple is once again open to the public, we wanted to share its main characteristics with you.

The portal is on the right end of the Nativity façade. It leads into the cloister with the same name: the cloister of Our Lady of the Rosary. Nevertheless, as the Temple works aren’t yet finished, and one of the tasks pending is this cloister that will connect the Nativity façade to the sacristy that will be built on this side, in the meantime Gaudí took advantage of the space and put in a baptismal font. So, temporarily, he transformed the first section of the future cloister of Our Lady of the Rosary into a provisional baptistery.

The entrance is in the square basement of the side tower on the Nativity façade, dedicated to the apostle Matthias. The door is closed, creating a triangular space that Gaudí covered with a lantern that has a double system of columns, inside and outside. The decorative filigree throughout the chapel is truly exceptional. Here, we can see how Gaudí, in researching the movement of helices, made the shaft of the eight inner columns with different helicoidal textures, as if they were the predecessor to his later discovery of the famous double twist column. 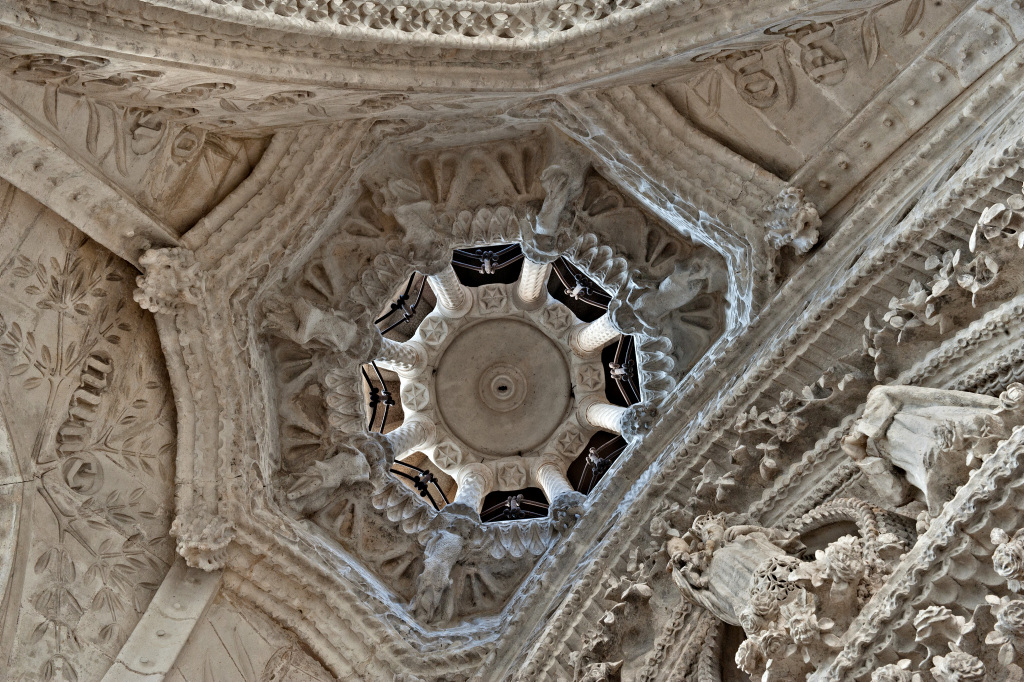 On the left end of the Nativity façade, symmetrically, there is a similar space that Gaudí dedicated to Our Lady of Montserrat. On the Passion façade there are also two portals that lead into the cloister, one on either side, dedicated to Our Lady of Mercy and of Dolours, respectively. Furthermore, at the entrance to the cloister of Our Lady of Dolours, visitors already note its function as a doorway into the Passion sacristy. Called the “Liturgical path”, this cloister is used to display liturgical items designed by Gaudí for visitors to see.

Although these spaces are passageways, Gaudí made them easily identifiable as such from the outside. So, on the Nativity façade, they are each highlighted by a svelte cupola that sits atop thin columns; and a couple of other points stand out, flanking the façade. On the Passion façade, the two cupolas haven’t been built yet, but they will be in the future, according to the latest version of Gaudí’s project. They will be hyperboloid in shape, following the sample built on the western corner of the sacristy. 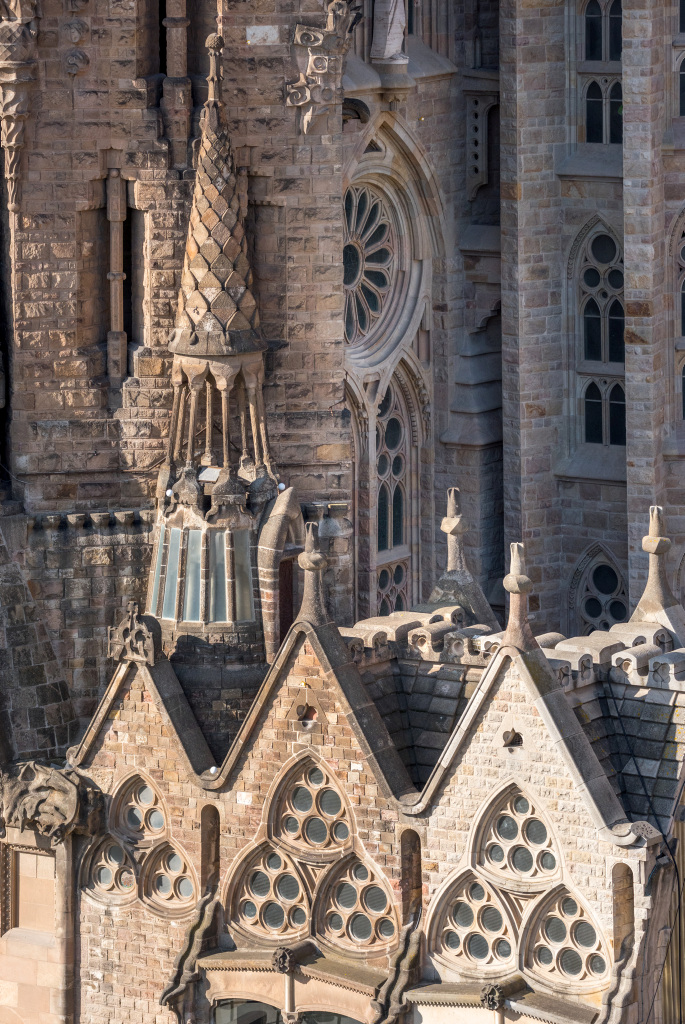 THE MAGNITUDE OF THE SCULPTURAL WORK

Perhaps, in spite of it all, the most prized part of this portal of the Rosary is its excellent sculptural work. It features the scene of Our Lady of the Rosary with the baby Jesus in her arms, and Saint Dominic and Saint Catherine on either side. At her feet, there is a polyhedron sphere with star-shaped faces. As this sphere is hollow, the stars stand out against the dark interior in a truly noteworthy piece of craftsmanship. The words “Sancta Maria Mater Dei” over the portal’s main ogive are done in a similar manner, with the letters of the inscription standing out against the darkness of the hollowed-out background. And all the roses and rosebush leaves found all over the door are also done this way, paying tribute to the rosary, which means a garland of roses. The four figures in the niches on the lower level are King David and King Solomon on one side and King Isaac and King Jacob on the other. Both the names and the canopies that top these sculptures are done in the same relief style. 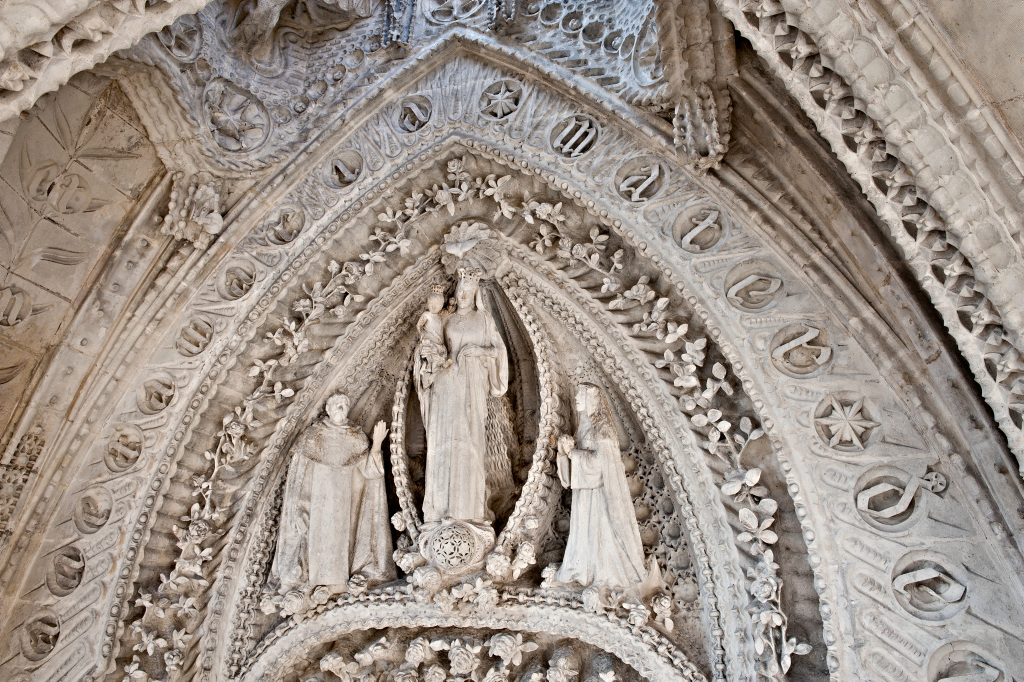 The other sculptural groups on this portal are, on one side, the scene of the death of the righteous, with a rosary in hand, accompanied by Jesus, Mary and Joseph, below the pertinent Latin inscription “et in hora mortis nostrae, amen”. On the other, we see the representation of temptation or evil: on one side there is a man working and a diabolical beast offering him an Orsini bomb to use in an attack; and, on the other, a similar monstrous devil offering a girl a bag full of money to sell her body. The former represents the sin of violence; the second, that of greed. Both look to, pray to and entrust themselves to the Virgin Mary and, therefore, don’t fall into these temptations. 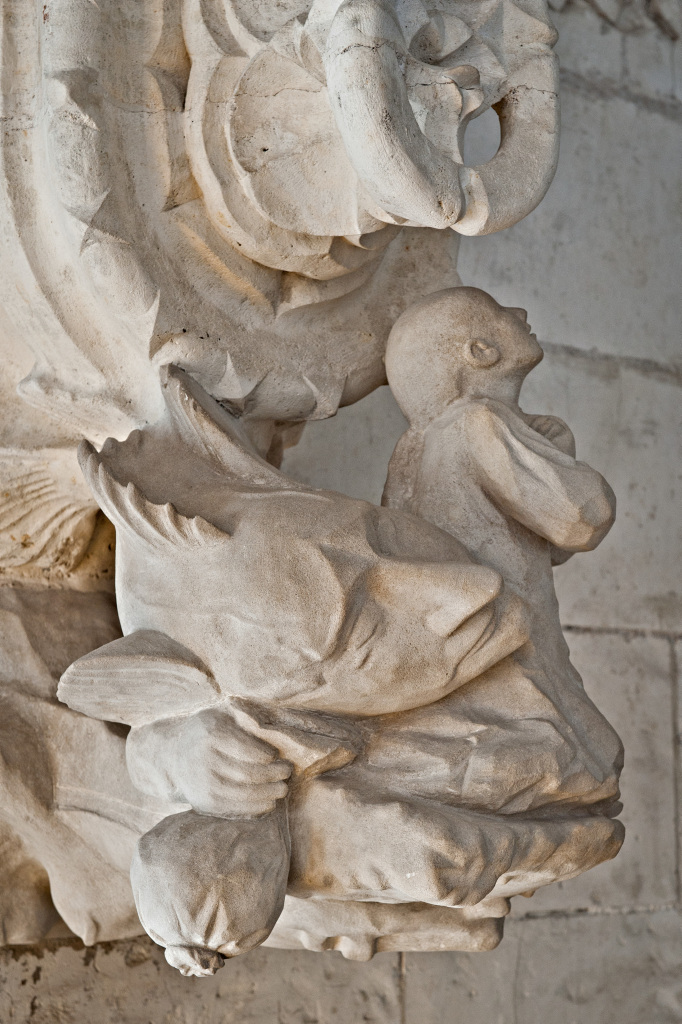 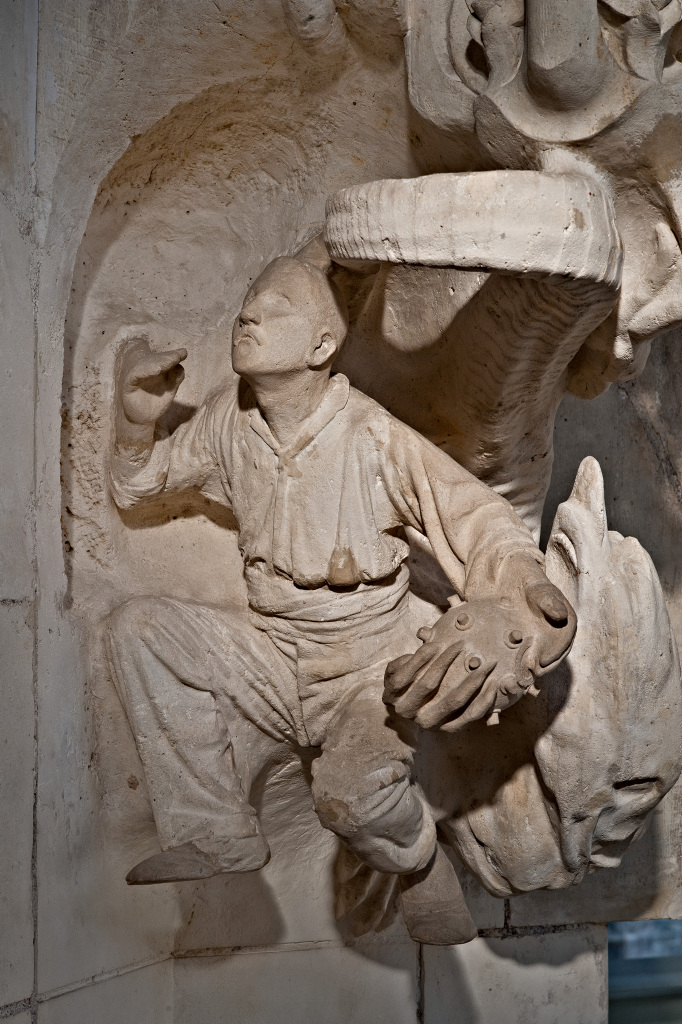 The sculptural work throughout the portal is so large that is seems to spill out all over the place, from the nerves on the Gothic vaults, angels and hanging rosaries to the people’s dresses and the stars and decorative elements that fill the walls. On the lower section, we can even see a sort of baseboard reminiscent of wicker craftsmanship, which is there simply to give it a bit of texture and leave no square centimetre untouched.

So, enjoy this space and the magnificent craftsmanship in this 360° photo, which will give you a chance to discover all the details as if you were really there.