Warning: Use of undefined constant ‘bwp_template_redirect’ - assumed '‘bwp_template_redirect’' (this will throw an Error in a future version of PHP) in /home/customer/www/blog.sagradafamilia.org/public_html/wp-content/themes/blog-sagrada-familia-v2/inc/security.php on line 115
 Plaster moulding - Blog Sagrada Família
[Author: Arxiu Mas]

For the Nativity façade, the sculptures were made using plaster moulding, which in Gaudí’s era was quite common. So, in his workshop, he created moulds of all sorts of vegetables, leaves and fruit, and also of typical carpentry tools, like a chisel and a hammer, for the portal of Saint Joseph. He also moulded dead animals, including birds, reptiles, frogs and toads. He even moulded a donkey for the scene of the Flight into Egypt. In this case, the animal was alive and, in order to create the mould, he had her hoisted up with a sling under her belly. Once suspended off the ground, terrified, she was still and could be moulded easily. The numerous photos of the workshop, with its walls and ceilings full of models made from the moulds, are good proof of this work and show that Gaudí used this method often.

In a previous article, we saw that he also used this technique to make sculptures of people. In fact, Gaudí used the people around him as models. So, everyone from labourers from the construction site to children from the parish school were used for this purpose. The humble residents of Poblet, as the Sagrada Família neighbourhood was called back then, became a permanent part of this façade, interpreted as a celebration of life. So, how did Gaudí manage to mould living people? 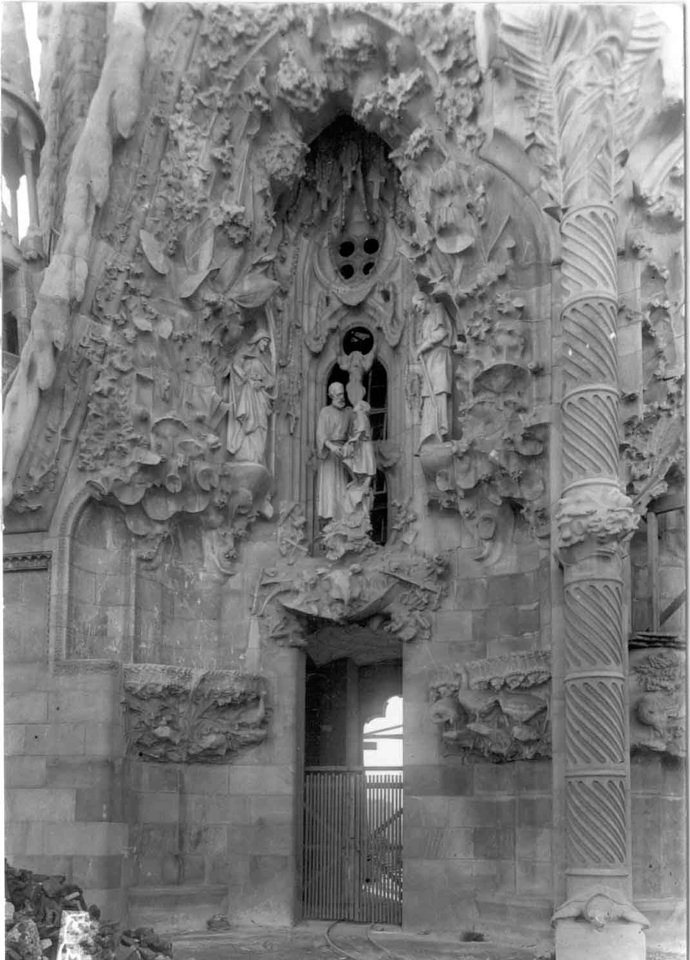 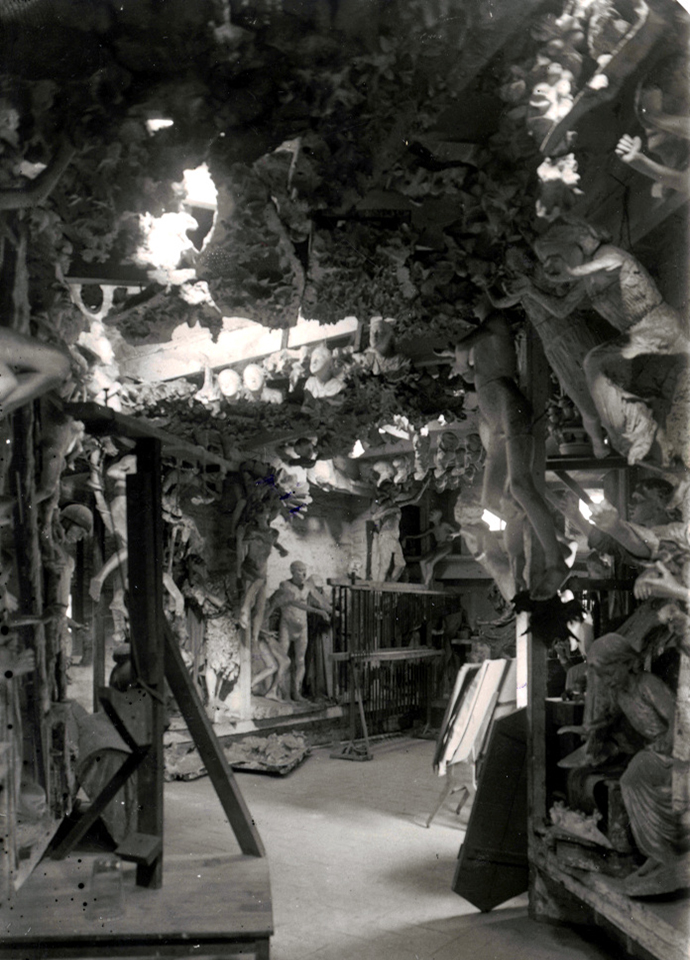 Some of the keys to this technique can be found in the book Gaudí, the visionary (La visió artística i religiosa de Gaudí), by Descharnes, Prévost, Pujols. The most important issue, according to the book, was the moulder’s skill, experience and professionalism, because the job not only has to be done well; it has to be done quickly. This is because the plaster sets up very fast and gives off heat as the chemical reaction takes place. This, along with the dampness and pressure, make it a suffocating process that could turn deadly.

For human bodies, the moulding was done in parts, which were then numbered and left in the Temple workshop, in an adjoining space. They were often interchangeable, so various combinations were possible. Nevertheless, the most delicate part to mould was the face. If the model wanted to keep their eyebrows, eyelashes and beard, these parts had to be covered in a pomade or fresh butter. Otherwise, the person had to come freshly shaved. After greasing their face and scalp with oil, the models were covered with a towel or two to prevent the plaster from getting into their hair or ears. Then, the models had to lay down flat with their eyes and mouth closed tight. Very thin feather shafts were put in the mouth and nostrils so they could breathe. The plaster was mixed with warm water and left to set up a bit so the effect on the face would be limited. Then, it was applied with a fine brush, starting with the forehead, then the cheeks and, finally, the mouth and nose. In just a few moments, no more than a minute, the mould had to be removed, lifting it very carefully from the edges so it would come off in one piece, like a piece of armour. 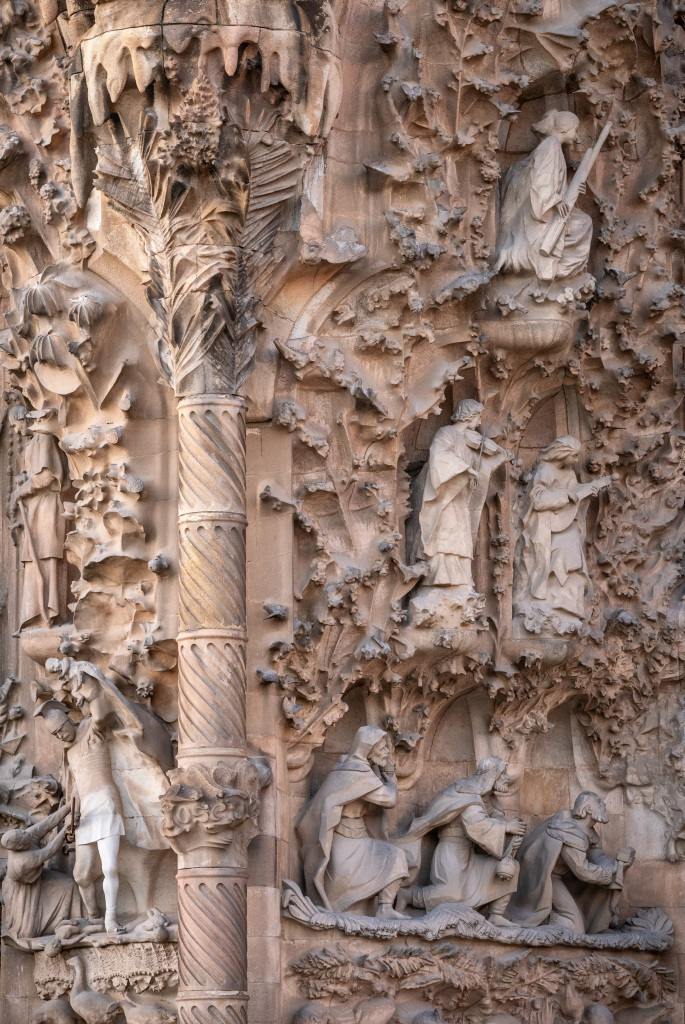 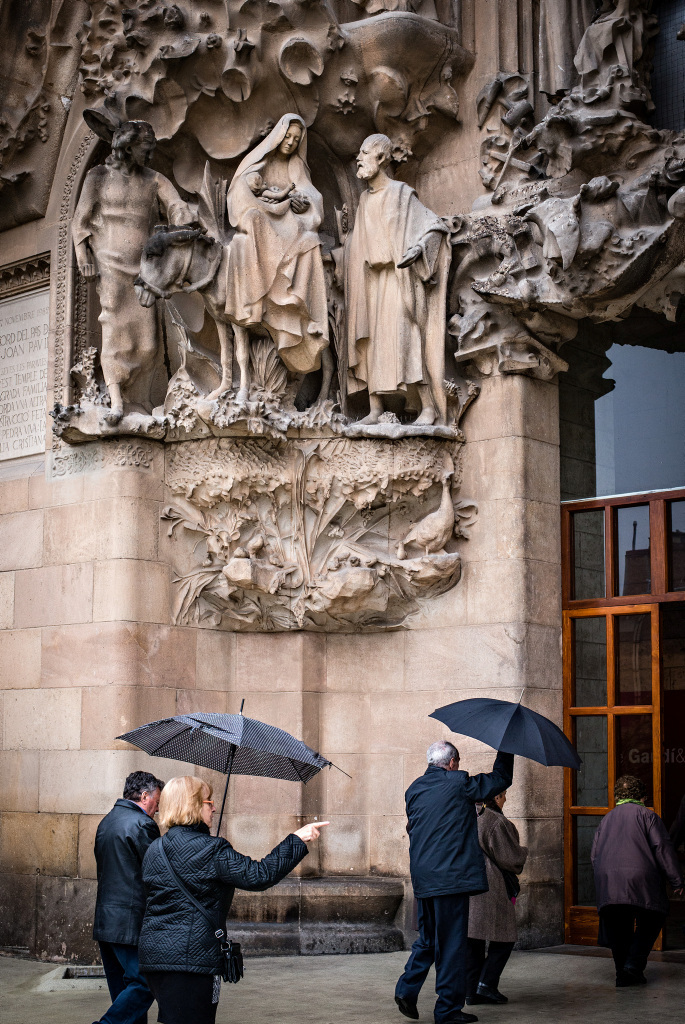 THE REASON BEHIND GAUDÍ’S MOULDING

Gaudí used moulding because it was effective and affordable, as it allowed him to make an imprint of reality as a shape and movement at the same time. Moulds and photographs were the techniques used to achieve what he really wanted: lifelike figures. While photography allowed him to capture fleeting moments, like beating wings, smoke or a falling body, with the plaster moulds he could faithfully recreate the person he really wanted. When choosing a real person, he looked not only at their physical constitution but also made sure their nature or character was similar to that of the person represented. This brought him closer to the truth he sought.

But Gaudí’s sculptural work, which began with small wire skeletons, didn’t end with the moulding. Then, Gaudí always went over them, correct, stylised or simplified them. Finally, his sculptures were integrated into the mass of the building, as if emerging from and extending it. Because both elements, his sculpture and his architecture, were born from the internal structure, the skeleton, that Gaudí said was the variable element, giving it shape and structure. “The rest,” he added, “is just details that are lost at a distance…”