The tower of the Virgin Mary, over the Temple apse, currently stands 110.65 metres tall and will be 138 when complete. It has eighteen levels of tensioned-stone panels already in place and construction will soon begin on its pinnacle. At the same time, the finishing touches have to be put on the rest of this part of the Temple, which have been on hold while the tower was being built. One of these is the pinnacles on the apse pediments.

The top of these pinnacles will be put in place in the coming months. So, we’ve decided to take this opportunity to tell you all about these elements. 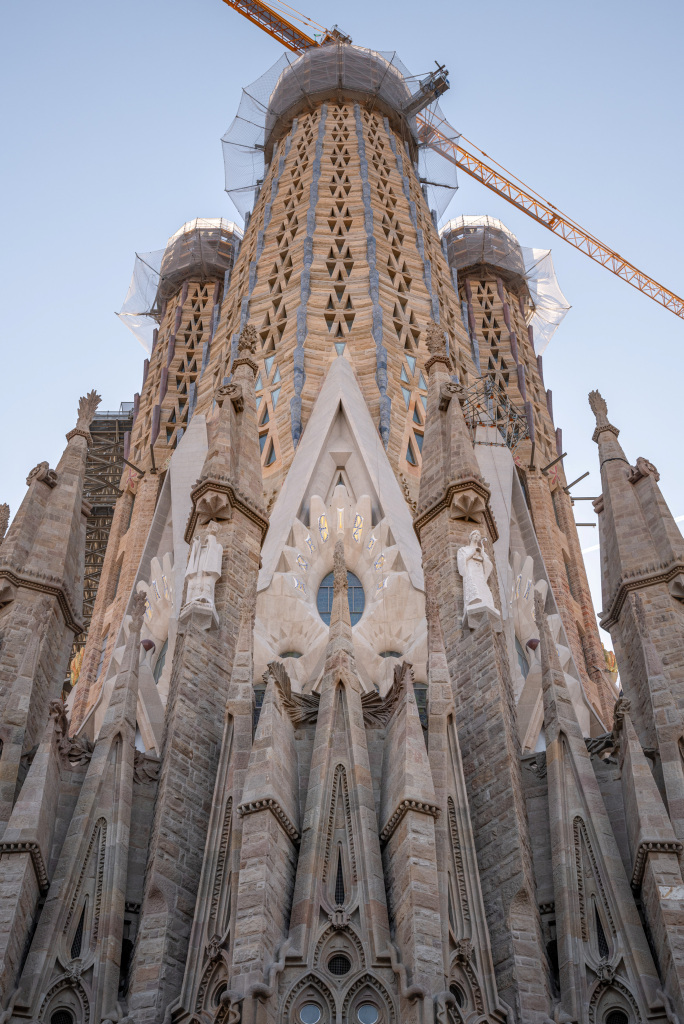 On the upper parts of the apse façade, Gaudí used various plants, laid out like a sort of railing that create a garden surrounding the tower of the Virgin Mary. And it is the fruit of these plants that will be on the very top of the apse pediments. This connection between the plants and their fruit isn’t only found in this part of the Basilica. The pediments on the windows of the side naves have tree leaves and, higher up, baskets of their fruit.

This handrail on the apse has leaves from cypress, palm, olive and rose bushes, among others. All these trees and plants are from The Praise of Wisdom in the biblical Book of Sirach or Ecclesiasticus, chapter 24 (9-19). This text was very popular in Gaudí’s time, read in the third nocturn of matins of the Officium B. Virginis. This is why Gaudí chose them and also included the fruit of these plants, which are in a basket made from the leaves of the plants and trees in the same text.

Of the plants represented on the railing, the edible fruit has been featured, fruit that the Virgin Mary offers in The Praise of Wisdom. So, starting on the corner with the Nativity façade, the first fruit we will see are rose hips, which are the fruit of the wild rose bush. Then, there will be a basket of oleaster fruit, from the oleaster or Russian olive tree. The basket on the central window, which is also the axis of the Temple, is full of dates, referring back to the palm fronds that are also in that position. The next is the basket of olives that have been put in place now, corresponding to the olive branch below. And the last one, on the corner with the Passion façade, is a basket of grapes.

The sculptures, by the team of Temple artists, are in granite, like the pediments. Although they vary in size depending on the type of fruit, they all weigh between 2 and 2.5 tonnes and are nearly 2 metres tall. They are approximately 1.3 metres wide and 1.1 metres deep.

Gaudí, as we’ve mentioned in previous posts, took the original neo-Gothic project and turned it into a more modern one using ruled geometry. And this shift can be seen in the Temple windows: starting from the level of the choirs, the architect designed modern windows, with an elliptical rose window that is not at all common in cathedrals. A triangular pediment frames each window with the leaves of fruit trees and atop these pediments, as we’ve said, there is a basket with the fruit of the same tree.

The chosen fruit represent, symbolically, the fruit of good deeds. Gaudí wanted to organise them by the natural course of the seasons when they are most commonly found. So, on the Nativity façade, looking east and towards the dawn, we have spring fruit. Here we find the loquats, cherries, plums, peaches and pears. On the Passion façade, we have apples, almonds, figs, persimmons and chestnuts, which looking west towards the end of the day, also represent the end of the year. The final baskets on this level are those on the transept windows: on the downhill side we have oranges and on the uphill side, pomegranates, both autumn fruit.

In the central nave, there is an upper level of pinnacles over the pediments, 60 metres off the ground. Here are the Eucharistic offerings: bread and wine. The bread rises up above a sheaf of wheat, referring to the harvest it comes from, and has some red touches representing the poppies often found in wheat fields. The chalice of wine is on top of a bunch of grapes. The bread and wine alternate in the following windows, although with the wine the grapes change to represent different types: red, white and Muscat. 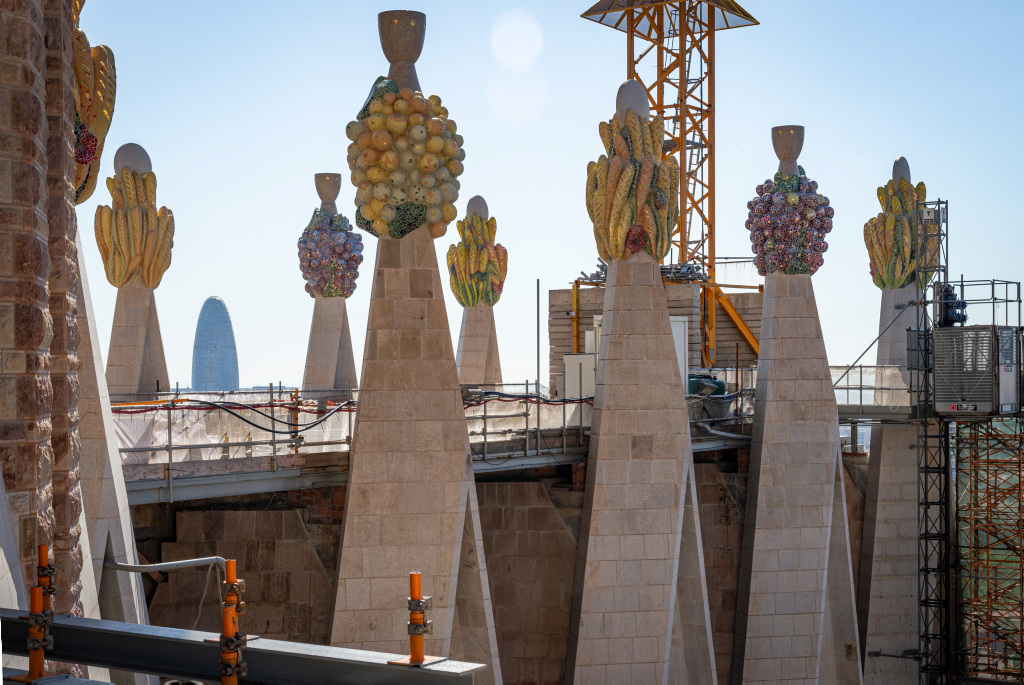