The pinnacles, which are the top section of the towers, are always the most eye-catching, given their host of colours and symbolic elements. And the pinnacles on the towers of the Evangelists, which are modelled after the bell towers on the Nativity and Passion façades, are no exception. In fact, the fourth Temple album includes this brief description of these pinnacles: “Surrounding the main lantern, there will be four smaller ones, dedicated to the four Evangelists, topped with pinnacles of an angel, a bull, a lion and an eagle. At night, a light beam will shine from them […] onto the cross on the main lantern.” This album also clearly describes the sculptural elements that will set apart each of the four pinnacles of the Evangelists. It tells us of the role Gaudí gave light in expressing how Jesus Christ’s message is passed on to the people through the four Evangelists.

Each of the pinnacles of the Evangelists looks towards its corresponding cardinal point, so they are at 45° angles. This means they will be perfectly visible from the four corners of the Temple and between the façades and the apse tower. Furthermore, as we mentioned in a previous article, they have three separate parts: an area of hexagons, a polyhedron and the figure of the tetramorph. Let’s look at why. 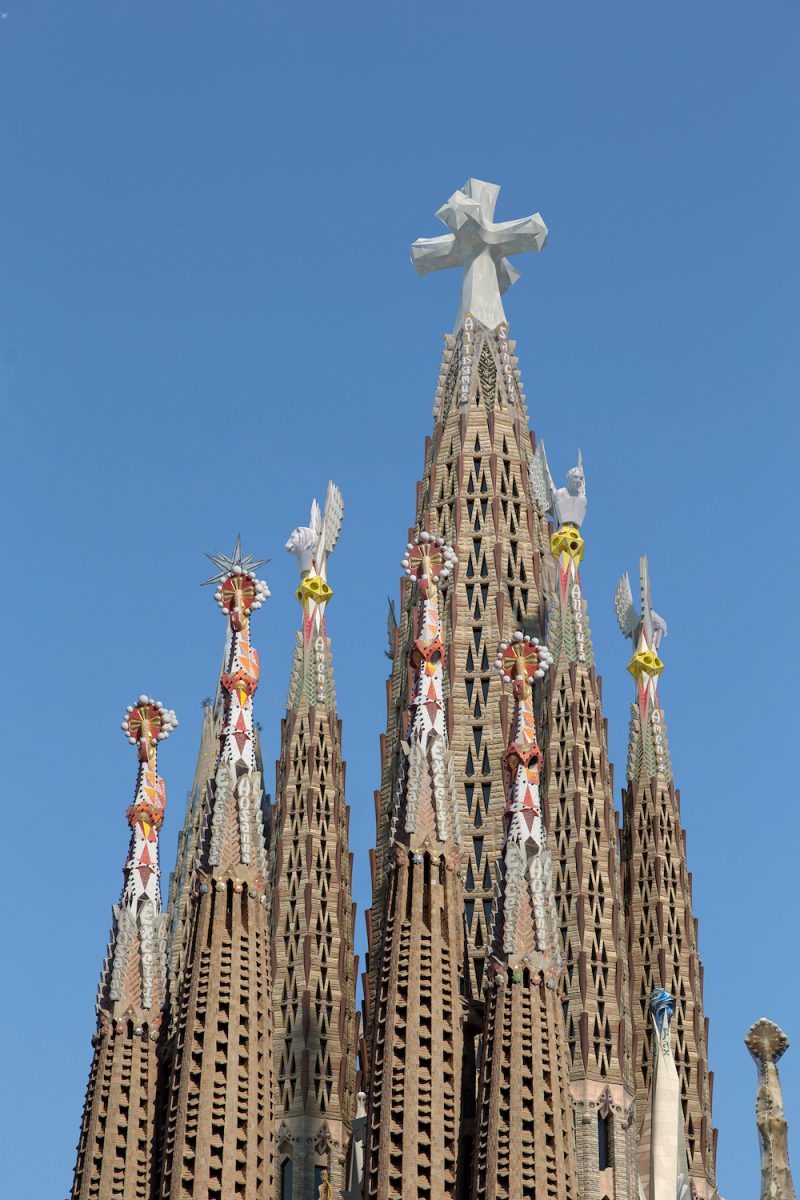 THE HEXAGONS: THE WORDS OF PRAISE

They are on the lower part of the pinnacles, stand 7.5 metres tall and contain the words of praise Amen and Alleluia, just as reflected in old documents describing the project. These words of praise are the same ones that will be in the hexagons on the roofs of the central nave. There are four words of praise on each pinnacle. This is half the number of stone panels that make up the levels being built on the towers of the Evangelists. This proportion follows that already present on the pinnacles of the bell towers on the Nativity façade, where Gaudí made a pinnacle with six lines of hexagons, and thus six words of praise, on a twelve-sided base. The longest word, Alleluia (from the song sung before the reading of the Gospel at mass), is facing the same cardinal direction as the tower, while the shortest one, Amen, is laid out perpendicularly.

Additionally, between the hexagons there are ceramic tiles laid diagonally like shafts of wheat, just like on the pinnacles used as reference.

THE POLYHEDRON: THE LIGHT OF THE WORD OF GOD

The polyhedron on the towers of the Evangelists is an icosahedron, with twenty triangular faces and twelve vertices; much like the pinnacles used as reference, a spherical bulge emerges from each of its faces and will be covered in golden-coloured Venetian-glass trencadís mosaic to make it shine. Likewise, as is also true of the existing pinnacles, two opposite sides of the polyhedron, those facing the main direction, are perforated and have light beams inside that will project onto the cross that will crown the pinnacle on the tower of Jesus Christ and, therefore, the Temple. 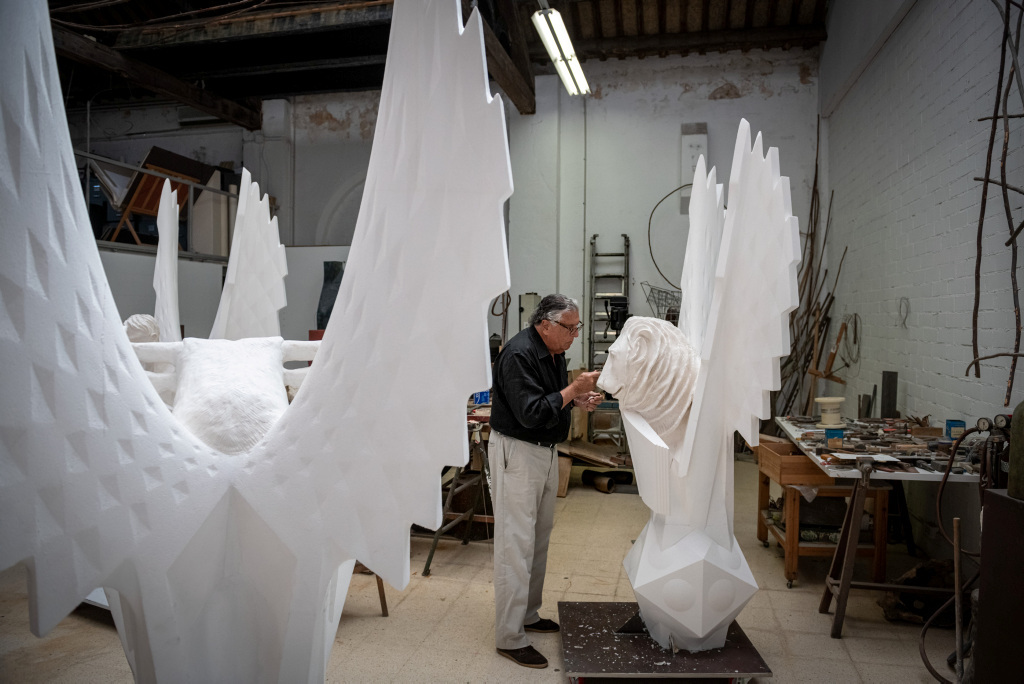 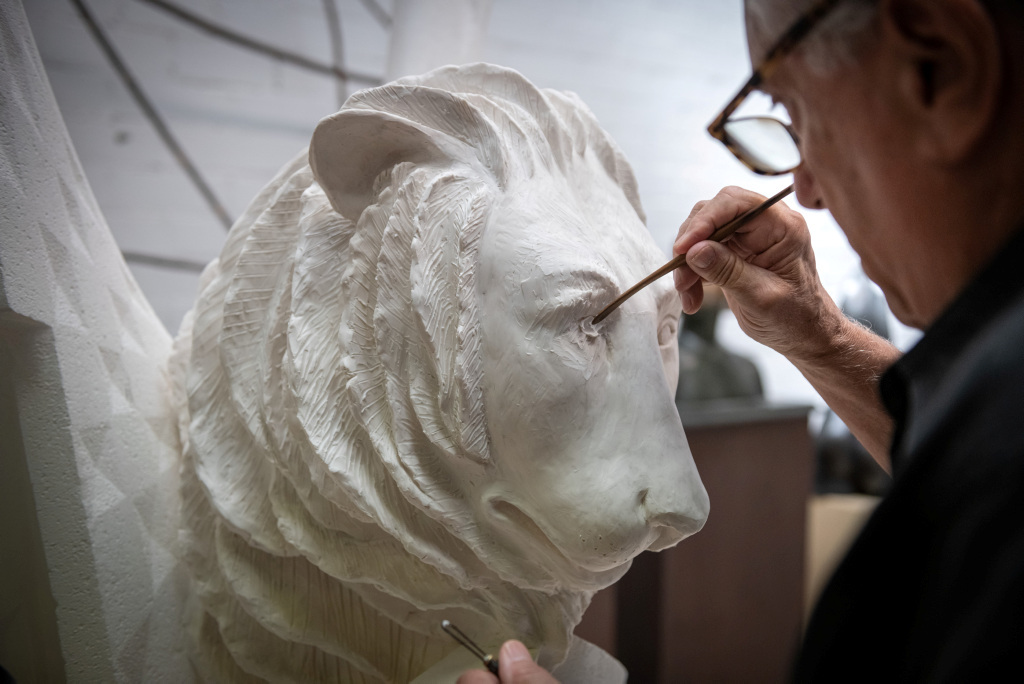 THE TETRAMORPH: THE WINGED FIGURE OF EACH EVANGELIST

The upper section of the pinnacle is 9 metres tall and is what most sets the towers apart, as each one features the winged tetramorph corresponding to one of the Evangelists: Matthew is an angel, a man with wings, which highlights the humanity of the son of God; Mark is a lion, a symbol of power, courage and royalty; Luke is a bull, a humble, calm beast of burden; and John is an eagle, which looks down on the world from on high.

Only the head is seen of each figure, except for the angel, which is smaller proportionally and shows a bit more of the body. This is the most artistic section of the pinnacle, designed by sculptor Xavier Medina Campeny. Under each figure, there will be an open book representing the sacred text of the Gospel, and the two pages will have the two letters that make up the abbreviation used to identify that Evangelist. This group made up of the book and the sculpture is roughly 4.50 metres tall.

What will stand out the most, however, is the top of the wings, the tips of which will stand at 135 metres above the ground and be clearly visible from a distance. The wings are made with one of the shapes from Gaudí’s last ruled geometry: a great hyperboloid with an elliptical cross-section.

And this is how, in three parts (hexagons, polyhedron and winged tetramorph), each of the pinnacles of the Evangelists will be completed. The pinnacles will measure 22.5 metres in total, which is one-sixth of the total height of the tower and, as could be no other way, is also associated with Gaudí’s base module.