The construction of the pinnacles of the towers of the Evangelists was approached following the same idea as the project involving the central towers. A prefabrication and pre-assembly system at an outside work centre was chosen for the latter, due to the lack of room in the construction site and the difficulty of working at such a height. This means that later, on-site, the construction process is simple and quick; moreover, this system increases the safety of the operators.

Therefore, it was also decided to divide them into different pieces and panels, but in this case without the steel and concrete structure that panels on the towers have. Therefore, the 22.5 metres of each pinnacle has five different sections, each of which was divided into different tensioned stone panels. These panels will weigh at most 14 tonnes, a limit which enables the main crane at the temple to raise them without problems.

The first three sections comprise the hexagon area, that is, the praises Alleluia and Amen and the decoration with ears of wheat between them. In this case, the tensioned stone panels are in alternate rows made of Cantabrian stone, English beige and toasted granite, just like the central towers, and they are simultaneously the structure and the interior and exterior finishes. 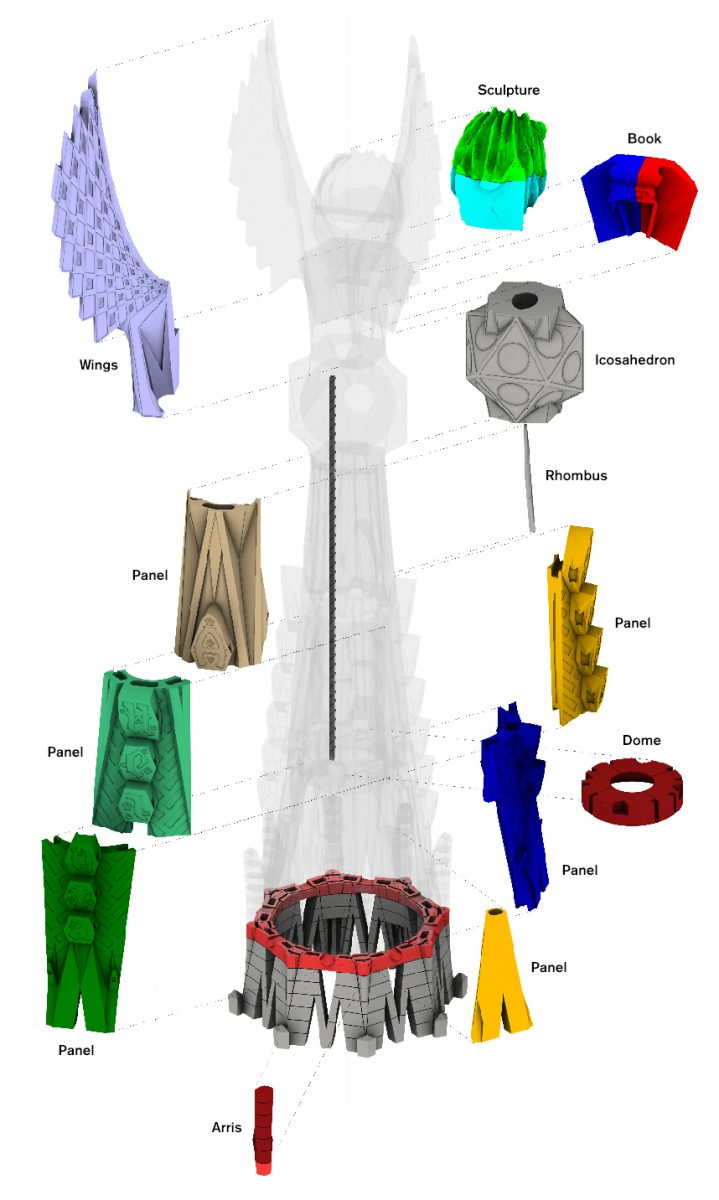 Following the models of the bell towers on the Nativity façade, the letters in these hexagons are made with square pieces of enamelled white ceramic; just like the aforementioned towers as well, polygonal stars made of gilded and silver-coated Venetian-glass trencadís mosaic were placed in the spaces around them. The ears of wheat that make a design resembling palm trees between the praises are made of green ceramic, and the third section, just under the polyhedron, also includes fragments of volcanic stone and multicoloured trencadís mosaic, following the model of the pinnacles taken as a reference.

The polyhedron is the fourth section into which the construction of these pinnacles was divided. It is a reinforced concrete icosahedron which serves as a geometric transition between the upper and lower sections. It is entirely clad in ceramic and Venetian-glass trencadís mosaic in yellow and gold tones.

The last section is the most sculptural and symbolic part: the book, the sculpture and the wings. The latter are made of two prefabricated pieces of white reinforced concrete , identical on all four pinnacles, while the book and sculpture are pieces sculpted in stone, specifically marble from Thassos.

The wings, the book, the sculpture and particularly the icosahedron are large pieces, so exceptional lifting systems will be needed to place them on the building. 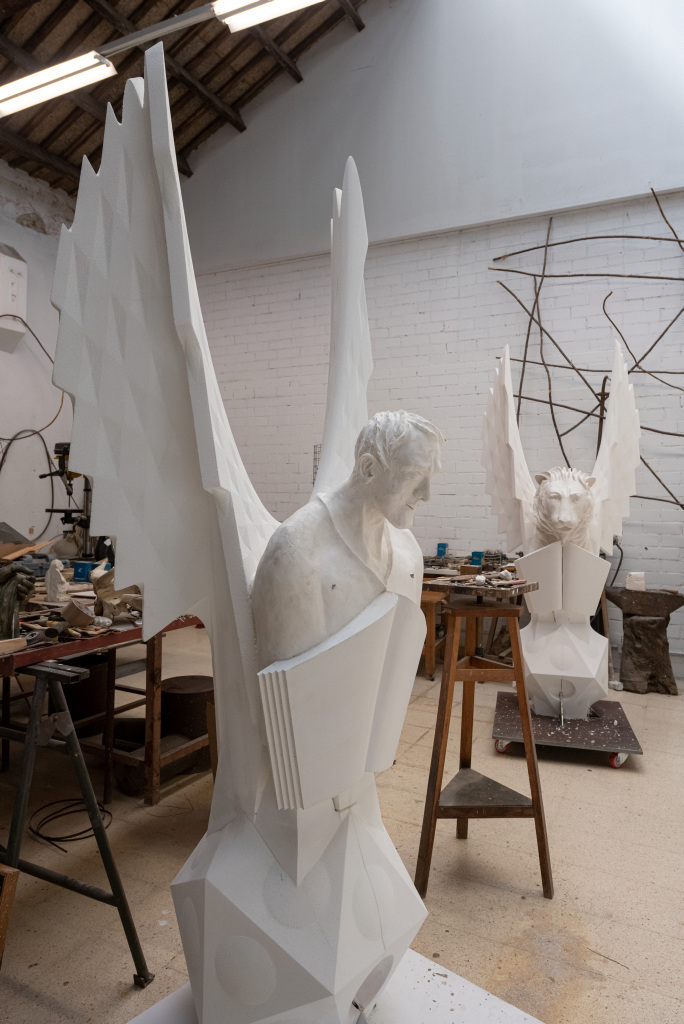 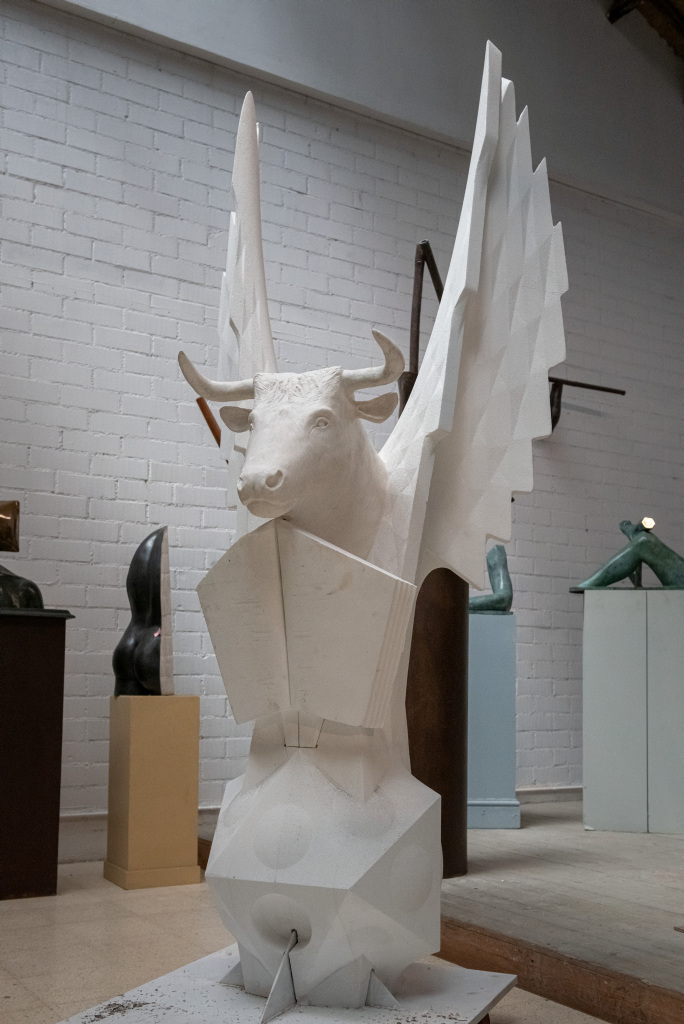 THE BASE GEOMETRY OF THE DESIGN

The shape of the pinnacle on the towers of the Evangelists comes from a hyperboloid to match the paraboloids on the tower, whose neck is located in the centre of the polyhedron. The transition was achieved with a range of planes and bevels decorated with coloured ceramics, similar to those found on the Nativity bell towers.

Above this base, that is, the hyperboloid, are four lines of hexagons which contain the Alleluia and Amen praises. Their size and layout will enable them to be read easily from a distance, as Gaudí planned them.

Above the polyhedron are the aforementioned symbolic elements. While the tetramorph is a completely sculptural part made by Xavier Medina Campeny, the book and the wings are architectural elements which were defined with the last ruled geometry that Gaudí used.

Given the monumental nature of the building, another main premise guided the design of these pinnacles, in addition to faithfully following the idea in Gaudí’s design: to maximise the longevity of the materials and minimise the maintenance of the architectural elements.

In this sense, since visitors will not have access to the pinnacles of the Evangelists, efforts have focused on providing maintenance staff a way to access the inside of the polyhedron when necessary, which is where the spotlights illuminating the cross on the tower of Jesus Christ will be housed.

For this reason, where the staircase of each of the towers of the Evangelists ends, at 85 metres high, a broad landing was planned to house a basket. If the maintenance workers need to reach further up, they will have to get in this basket, which will help them rise to the beginning of the pinnacle, at 115 metres tall. At that point, where the dome that surmounts the interior of the tower is located, they can access a retractable platform lift which, like a lift with a crawling peg system, will enable them to rise inside the polyhedron, 123 metres tall, where the spotlights will be housed.