Warning: Use of undefined constant ‘bwp_template_redirect’ - assumed '‘bwp_template_redirect’' (this will throw an Error in a future version of PHP) in /home/customer/www/blog.sagradafamilia.org/public_html/wp-content/themes/blog-sagrada-familia-v2/inc/security.php on line 115
 The Nativity façade: key moments in its history - Blog Sagrada Família

The Sunday 1 December was the first day of Advent: a time to prepare for Christmas that the Sagrada Família is celebrating with various activities and events. For this reason, we wanted to explain the details of construction of this façade that features the birth of Jesus and Advent, the time leading up to it: the Nativity façade.

THE WORKS IN GAUDÍ’S TIME

In 1893, after completing the apse façade, with its pinnacles in place 50 metres above the ground, work began on the foundations for the Nativity façade. New trenches were dug by hand, down through the first layers of clay under the city of Barcelona to the limestone bedrock, which is stronger.

Around this time, the Temple also received a significant donation, which sources say was between 500,000 and 800,000 pesetas, a very considerable sum in the late 19th century, which allowed Gaudí to make his project even more monumental.

In 1896, just three years after having begun the foundations, the façade was already 9 metres tall and the columns had been put in place separating the three portals: the central one showing the genealogy of Jesus in an ascending spiral, encompassing the wrought-iron gate, and the side ones with the names of Joseph and Mary resting on turtles.

The façade was going up at a good pace. The following year, the bell towers already stood 20 metres tall, and the first sculptural scene, of Jesus preaching at the temple, was put in place. Around 1899, the sculptural decorations on the portal of the Rosary were practically finished and, in 1900, a life-size plaster model of the whole central archivolt for the façade was presented on the work site. 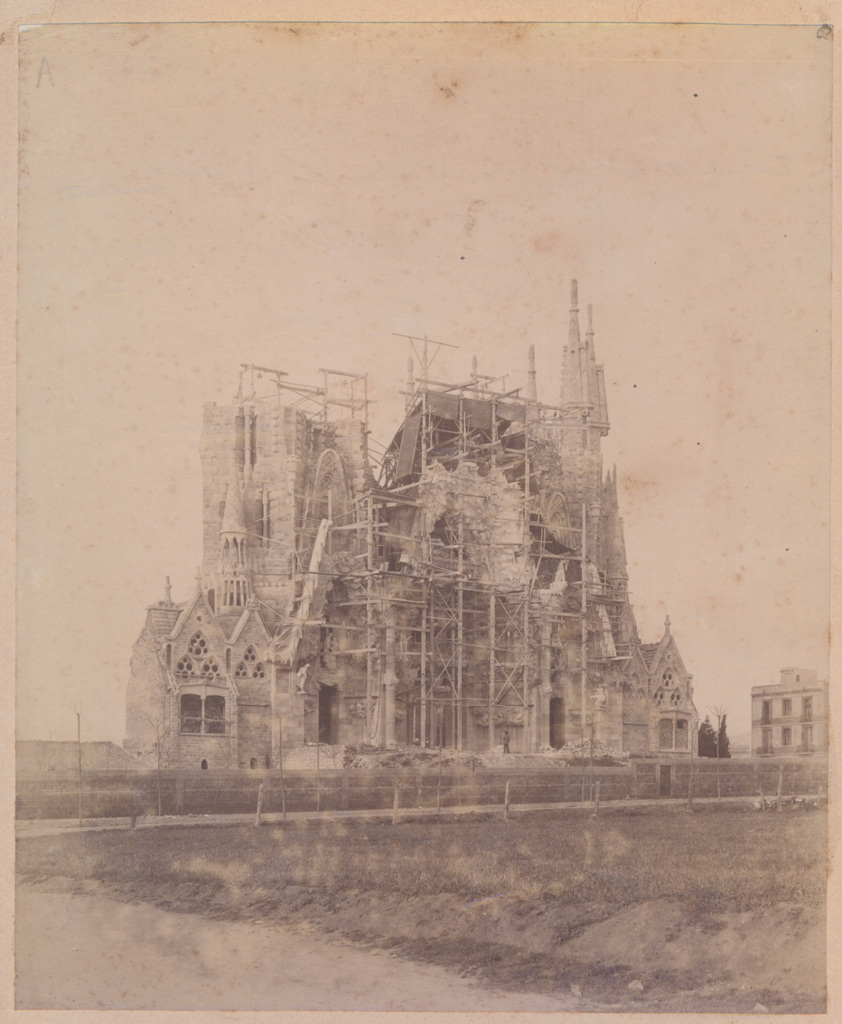 In 1901, the central bell towers were already 29.75 metres tall, but from 1905 work began to slow, as the initial donation started to run out. This is when poet Joan Maragall published a call in the newspaper for donations in the name of “Una gràcia de caritat! (A grace of charity)”, which achieved its goal. From that time, work turned to the bell towers, with all four growing at the same pace, behind the scaffolding. Around 1906, they stood 44 metres tall; in 1908, fifteen years after starting works, they were 48 metres tall, nearly half of what they are today.

From 1914, however, the lack of funds became a serious problem and, around this time, Gaudí left the rest of his works to concentrate exclusively on the Temple. 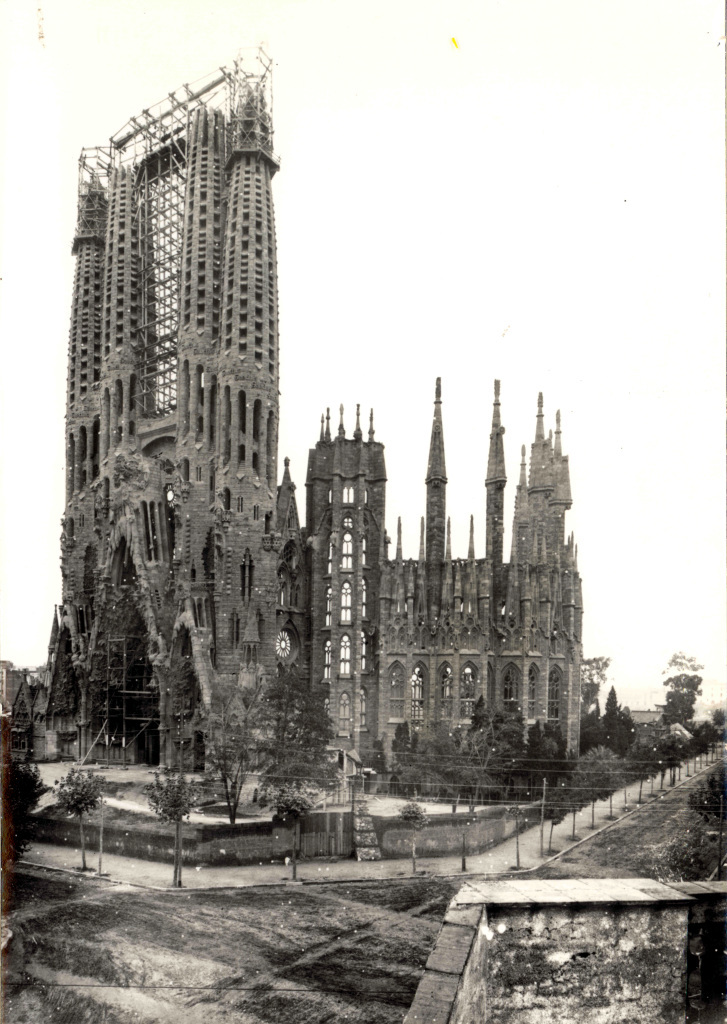 Finally, the first bell tower to be finished, which Gaudí saw without the scaffolding, was the Saint Barnabas tower, on the sea side. That was 30 November 1925 and the master was quite satisfied, especially by the admiration it garnered from humble individuals, like the clockmaker, whose comment (“Looks great”) touched Gaudí deeply.

Gaudí, however, died just months later, in June 1926. Domènec Sugranyes, who had been Gaudí’s right-hand man for all those years, took over as head architect. So, he was able to carry on, true to the master’s intentions and methods. In 1928, work finished on the tower corresponding to that of Barnabas on the mountain side of the building, dedicated to Matthias. And, in the following two years, the two central towers were completed: Jude Thaddeus and Simon.

The central cypress tree on the façade was completed in 1932, along with the holy symbol of the pelican above it. At the same time, the remaining sculpture groups were finished, including those depicting Jesus the carpenter and Joseph and Mary at the temple. Through 1936, after the bell towers were finished, efforts focused solely on completing the various sculpture groups that had been started long before, including the apostles, Saint Joseph with the ship of the Church, and the Coronation of Mary. This task was led by Joan Matamala, who followed Gaudí’s technique faithfully. 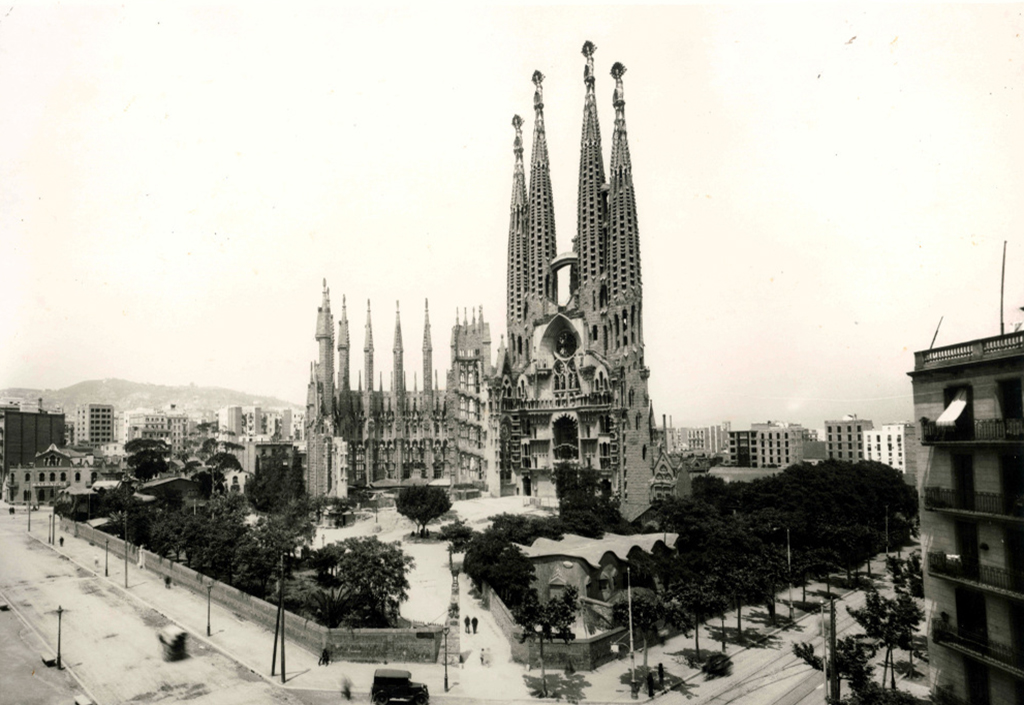 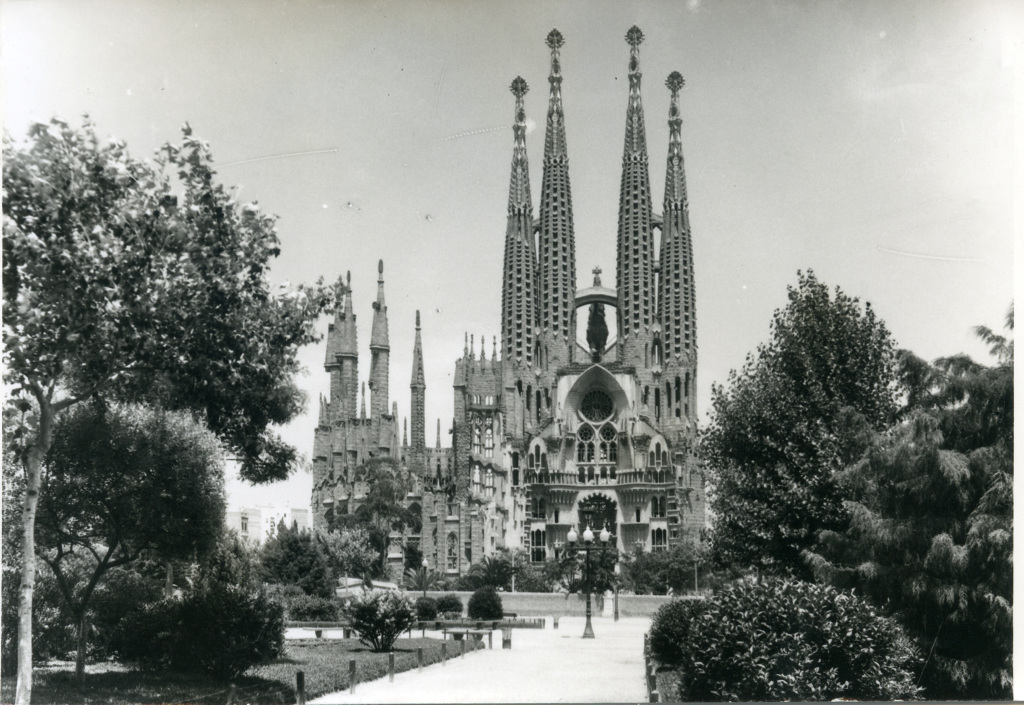 After 1939, work on the Nativity façade focused on creating and putting in place the sculpture groups that completed the façade. Gaudí had left plaster models for most of these sculptures, which were destroyed in the Spanish Civil War. This included the main scene of the crèche, by sculptor Jaume Busquets, which was a donation from the employees at Banco de Bilbao, put in place in 1958 with a festive celebration. The scenes of the Adoration of the Shepherds and the Adoration of the Magi, by Joaquim Ros, were put in place in 1981 and 1982, respectively. 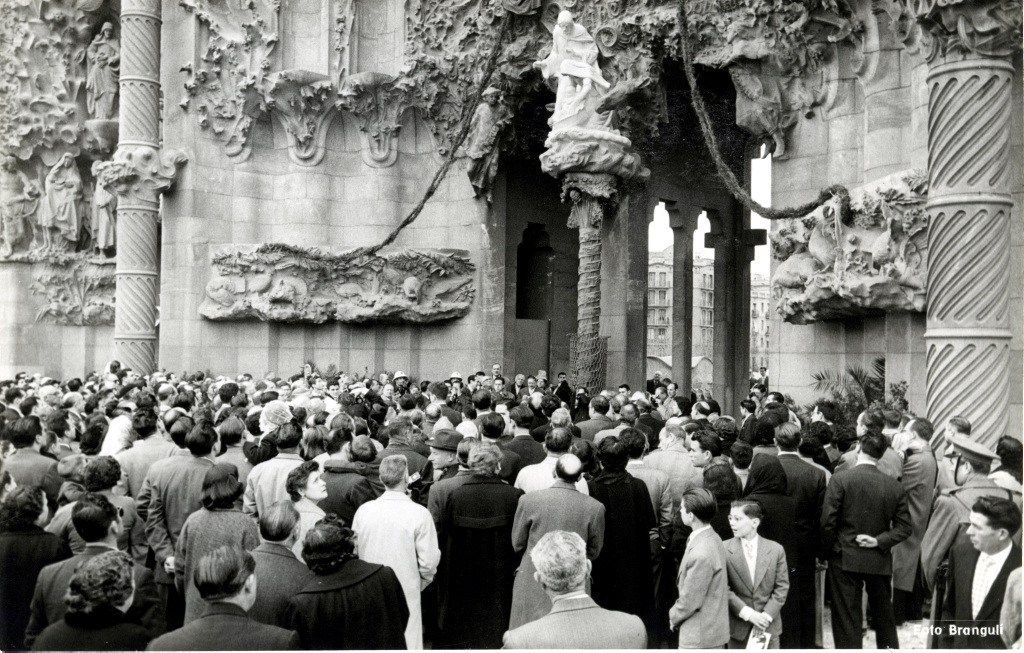 Later, the angel singers and musicians, executed by sculptor Etsuro Sotoo following Gaudí’s plaster models, were put in place. Sotoo’s team of sculptors also designed the final element to go onto the façade: the huge bronze doors that lead into the Temple. 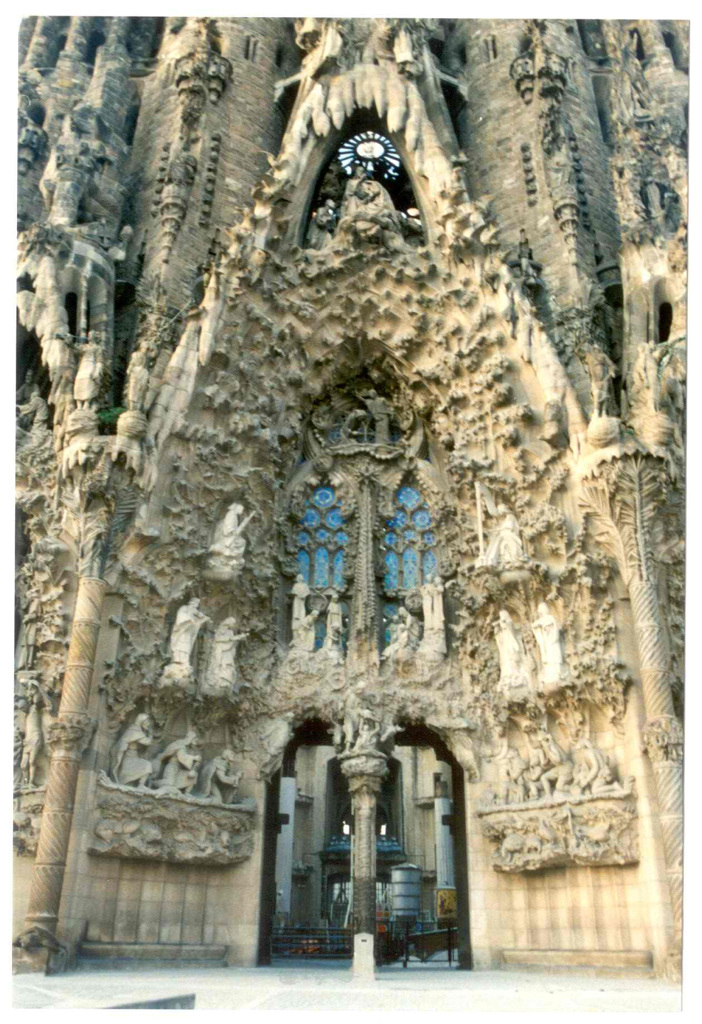