Saturday 30 December is the Feast of the Holy Family in honour of Jesus of Nazareth and his parents, the Virgin Mary and Joseph of Nazareth, as a family. This feast is celebrated on the Sunday within the Octave of Christmas (between 25 December and 1 January) or 30 December if there is no Sunday that falls between these dates. It has been this way since 1969, although this feast, instituted by Pope Leo XIII, was originally held on the Sunday within the Octave of the Epiphany, meaning the Sunday between 7 and 13 January.

The Temple of the Sagrada Família, which means the Holy Family, features many explicit representations of the Holy Family in various locations, particularly on the Nativity façade. First, we can see them in the sculpture groups representing scenes of the family in Jesus’ early years. But the names of all three, Jesus, Mary and Joseph, can be found at the top of the three columns: the central column, which features Jesus’ complete genealogy from Abraham, Isaac and Jacob, finishes at the top with the letters of Jesus, while the columns on the right and left, respectively, features the names of Mary and Joseph. All three names can also be found on the end towers of the façade, under the balconies. On these same balconies, we can also see the sculpted symbols: on the railing, a carpenter’s plane representing Saint Joseph and a crown, representing the Virgin Mary; above the door to the balcony, a crown of thorns, representing Jesus Christ. 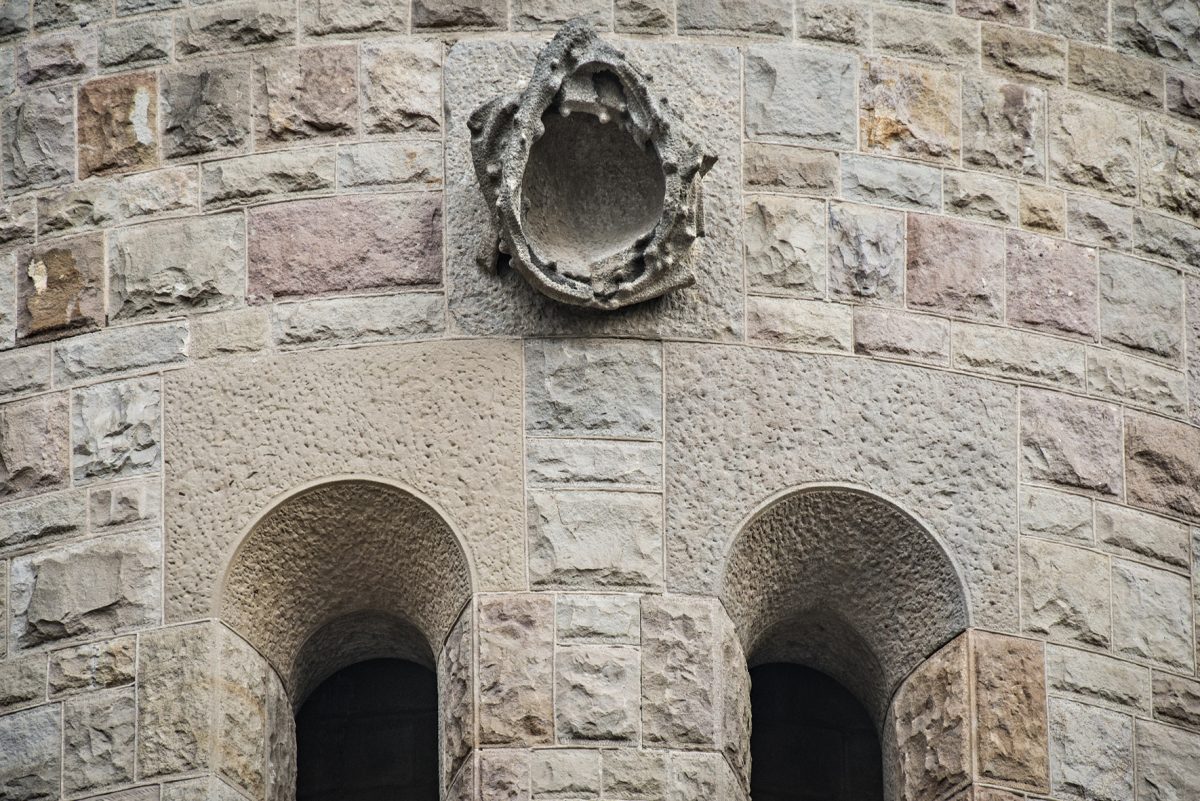 However, there are also other sorts of representations that refer to the Holy Family, which may be a bit more cryptic, like the anagrams. Because the first initials of Jesus, Mary and Joseph, in this order, create palindromic initials that can be used to make quite beautiful anagrams. In fact, World Youth Day, a yearly event for young people organised by the Catholic Church, has used these initials a lot as they are also those of the event in several Romance languages (including Catalan: Jornades Mundials de Joventut), which has helped extend this anagram to all corners of the globe.

Gaudí also took advantage of it and designed several anagrams. One of the most significant is in the medallion on the roof of the structure adjoining the Sagrada Família parochial building. This multi-purpose structure is free standing from the rest of the parochial buildings, as Gaudí built it to cover the growing need for space. It was used for various events and also as a hall with a separate entrance. It is lower and has a sharp outline, which makes its roof stand out from the rest. The medallion on top was done in coloured ceramic tiles, making it highly visible.

It was used as an example for the shield on the floor of the Temple at the centre of the crossing and, on a smaller scale, in front of the presidential chair in the presbytery. Even more discreetly, we can also see them on the handles of chancel screens at the Temple, on the Glory façade.

And it is truly a great achievement how Gaudí created a such complete symbol with limited elements and colours. The five vertical white stripes are the three central bars of the M for Mary, with one J on either side, for Jesus and Joseph. The key elements, symbolic, are yellow and orange. The J for Jesus stretches up and towards the centre, crowned with the cross of Christ, which identifies and marks the J of Jesus at the beginning.

The J for Joseph, at the end, stretches downward, as a sort of reflection of the first one, also moving towards the centre, with the flower of the flowering rod that symbolises the Saint. The crown is the element that symbolises Mary, often depicted as a queen. In this case, the crown is simplified as a central band tying the three bars of the M together.

Also very beautiful, and even more complete, is the JMJ anagram that crowns the frame of the painting devoted to the Holy Family that Gaudí made for Casa Batlló, which is kept in the museum at the Temple. In this case, it is wood with gold-leaf and, in addition to the three symbols (cross, crown and flower), we can also see how the J for Jesus stretches at the bottom and splits into three, becoming the nails of the crucifixion. The J for Joseph also stretches down on the other side to show another flower, so one is closed and the other is fully open. Mary’s crown is also much clearer, as a circle around the three bars of the M, and the whole thing is framed by a sort of rosary that, on top of the letters, is reminiscent of the crown of thorns.

Now, as the final pews have been put in place for worshippers at the Basilica, we can see the wrought-iron prie-dieus on the first row have the same anagram, symbolising the beloved Holy Family that, as we have seen in this post, in addition to giving Gaudí’s Temple its name, is also present throughout the interior.