A decade ago, the Sagrada Família decided to move construction works from the one-block plot in Barcelona where the temple has been located since the Associació Espiritual de Devots de Sant Josep (Spiritual Association of the Devotees of Saint Joseph) decided to purchase the land to build a place of worship. The goal of having the temple consecrated, which had been set for 2010 and was a very important milestone in the history of the Basilica, meant works had to be sped up. Plus, the space at the temple was becoming increasingly tight for all the work and manoeuvring with huge amounts of concrete. Remember, at that time work was under way on the large hyperboloid for the tower of the Virgin Mary, 75 metres tall. All the work still to be done, including construction of the central towers we are busy working on now, made it clear the investment would pay off. And that was how Galera, in the municipality of Gaià (Bages) and on a plot the size of eleven football fields, became the site of the making of the Sagrada Família.

And we could say that this is where the temple truly began taking shape. One part of the Western sacristy, in use since December 2016, was built in Galera, from the basement to the pinnacle. The pieces were then moved to Barcelona to be assembled in their proper location. Now, this is where the panels being used to build the central towers are being pre-assembled. The stones are sent from the industrial workshops where they are shaped and finished to Galera, as are the stainless-steel structures that, like a human skeleton, give the pieces their strength. And there, an hour’s drive from the temple, amidst birds chirping and an expanse of green that is unthinkable in the big city, is the site of one of the innovative processes the Sagrada Família has started using, which has helped speed up construction and allowed the temple to set its completion date in 2026: post-tensioned stone. 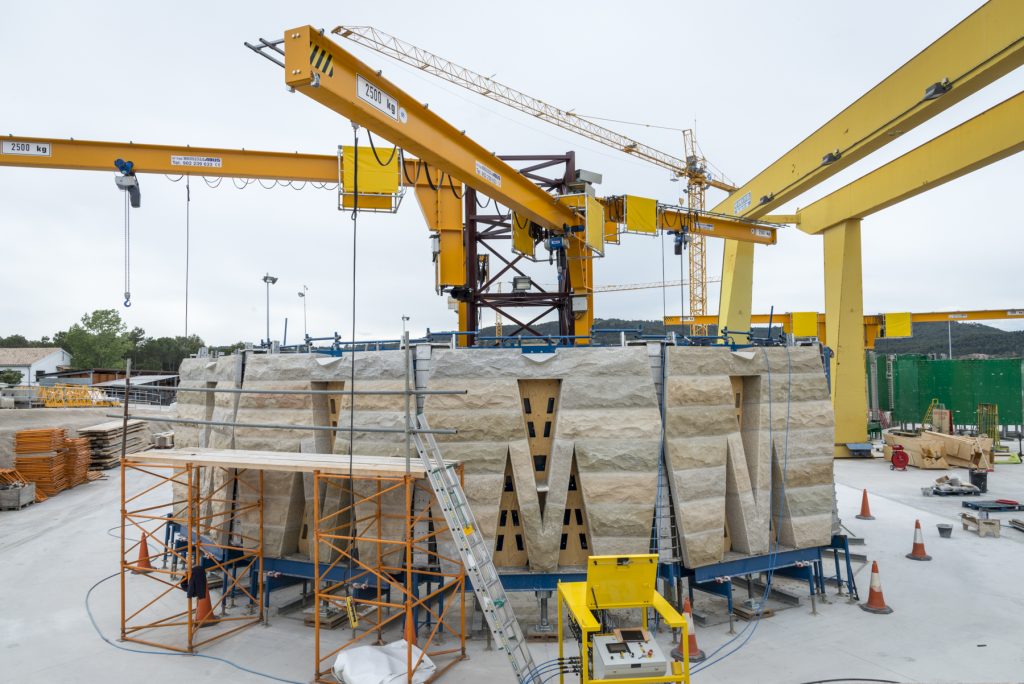 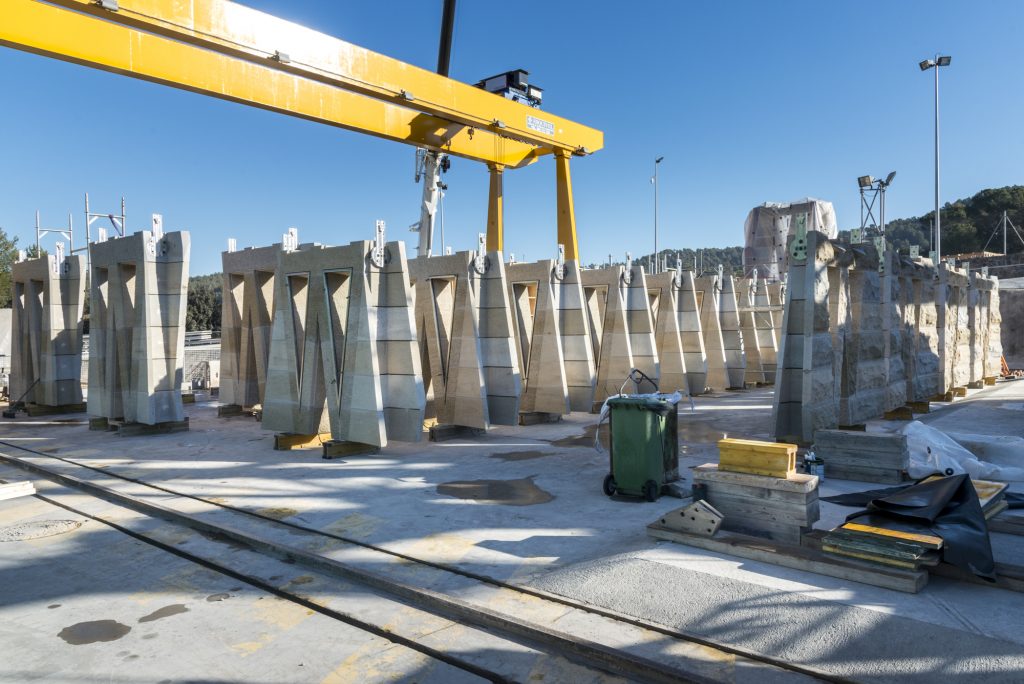 One of the warehouses on the land the Junta Constructora owns in Galera is now home to the machine that injects the resin between the steel bars and the stone, which helps assemble all the pieces and was designed especially for the Sagrada Família. The resin comes to Galera from Italy and the Sagrada Família uses it to allow two very different materials, stone and stainless steel, to work together. The heart and soul of the innovation that is much celebrated in speaking about the temple, thus, lies in Galera.

Nevertheless, this is commonplace for those working at this centre, as the work under way to erect the central towers means they have to tension stone almost daily. This volume of work will increase further when they start making the stone panels for the Basilica’s tallest tower: the tower of Jesus Christ. This increase in production has even made it necessary to expand the work spaces in the existing warehouses, as the pieces for this tower will be bigger and, thus, require more space for manoeuvring.

The system of building the central towers using post-tensioned stone has sped up the process. This way, for example, the towers of the evangelists can get one new level, a bit more than three metres, in just over six hours. This is the time it takes the crane and operators to put the panels in place at the temple. In Galera, however, it takes three weeks to make these panels. For the tower of the Virgin Mary the same work takes five weeks. After that, the panels are sent to Barcelona after passing their final inspections. Before reaching the temple, they are also put into a circular surface in Galera with the same diameter as the tower they will be used on. The process used, in fact, is the same that will take place later at the Sagrada Família, so we could even say each tower is built twice: first, in Galera, to make sure the columns, panels and steel bars fit together perfectly (even a two-millimetre deviation in assembly of the piece would set off an alarm, which hasn’t happened to date), and then at the temple. 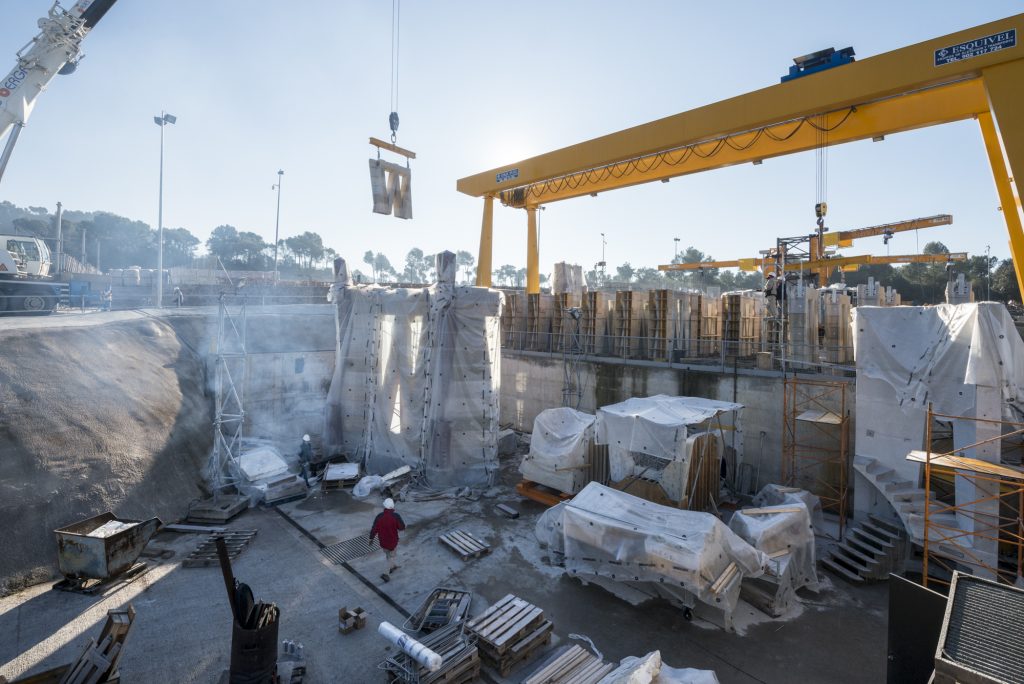 FROM WOOD TO IRON

However, Galera is much more than post-tensioned stone panels: it is the centre of production for many of the elements being used to build the Sagrada Família, from the arrises on the columns to the steel used as the structure for some pieces and the wood templates used to map out where the structures go. It is there that work is now under way on the columns for the roofs on the main nave, the bridges that will connect the central towers and, even, the painting of the pieces that will top the arrises on the tower of the Virgin Mary and act as a lightning rod, which should blend perfectly with the other Brazil blue granite pieces on the arrises. 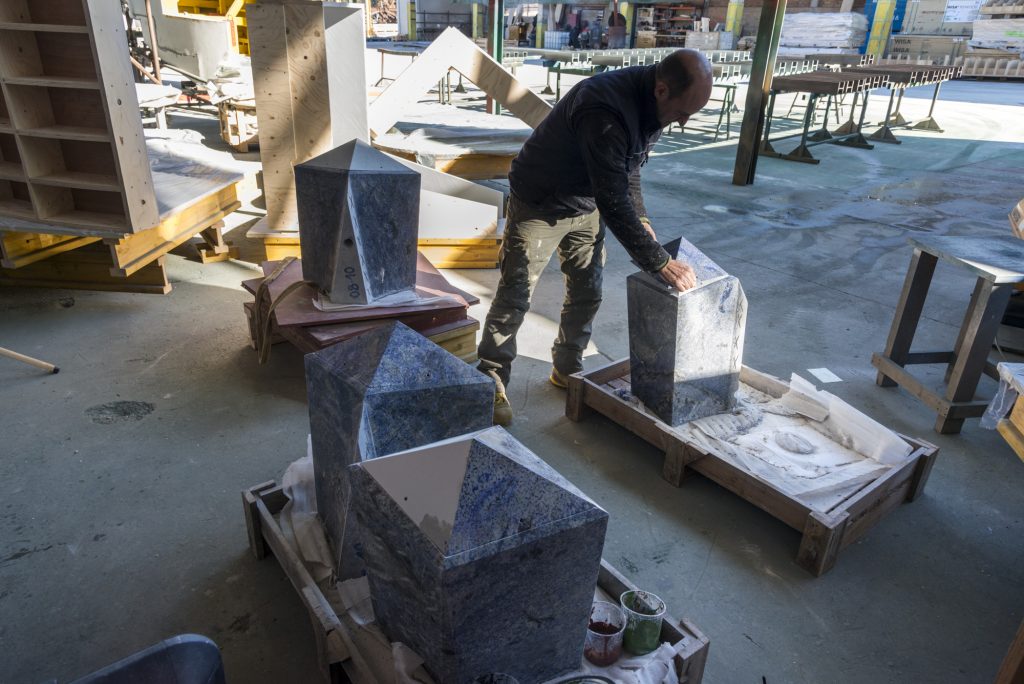 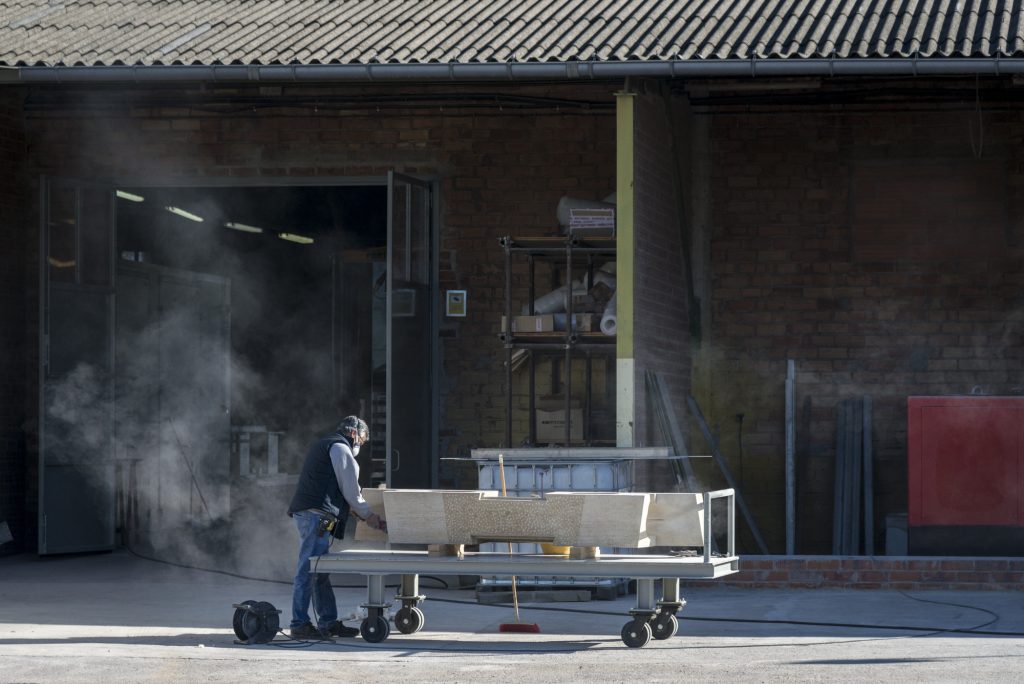 And all with the advantage of working at ground level in Galera, instead of at height like at the Sagrada Família. This way, the workplace is safer for operators and the wind, which is the main obstacle to work advancing at the temple, isn’t an issue. At the temple, in fact, strong winds are one of the reasons we have to postpone putting panels onto the central towers, but in Galera, production goes on uninterrupted. So, discretely but without fail, in this enclave far from gaze of the media and people alike, work can go on to build and assemble the materials Gaudí’s dream is made of.