On the path the Sagrada Família has undertaken towards 2026, the year the Temple architecture is expected to be completed, we are currently at a very meaningful juncture, with the construction of the central towers that will crown the building. Their growth, which began in December 2016 when the first panels were put in place on the tower of the Virgin Mary, is advancing steadily and, furthermore, is leading to some highlights in the history of the Temple, making them milestones. One of these will be when the central towers surpass the height of the bell towers, a point we will be reaching very soon. To keep up with this milestone and the others we will be reaching, we’re launching a new section of the blog, called ‘Following the works’, that will allow you to stay up-to-date on the construction of the Temple.

So, let’s look back at the progress of the works on the Sagrada Família in recent months!

In recent months, the six central towers have been rising and have now all surpassed the symbolic benchmark of 100 metres. So, the towers of the Evangelists, which will be 135 metres when finished, have gone from the sixth level (95.96 metres) to the ninth (103.56 metres). The tower of the Virgin Mary, which began the year on the fourteenth level at 102.31 metres, has grown one level more, to 104.35 of the 138 it will have when finished. Plus, in early June, the panels for the eighteenth level began to arrive at the Galera workshop. These will be the final panels to go on this tower as, although it will have a total of nineteen levels, the panels on the last level are considered special panels because they connect to the pinnacles.

For its part, the tower of Jesus Christ, which at 172.5 metres will be the tallest at the Temple, began the year with the panels on the first level in place and, in recent months, has grown two more levels, to 101.5 metres. It was the last tower to surpass 100 metres and did so as the only tower that had to have some panels split into two pieces so they could be put in place on site. This was necessary due to their size and weight, more than four times that of an elephant. In fact, the panels on the third level, put in place recently, are 5.62 metres tall. 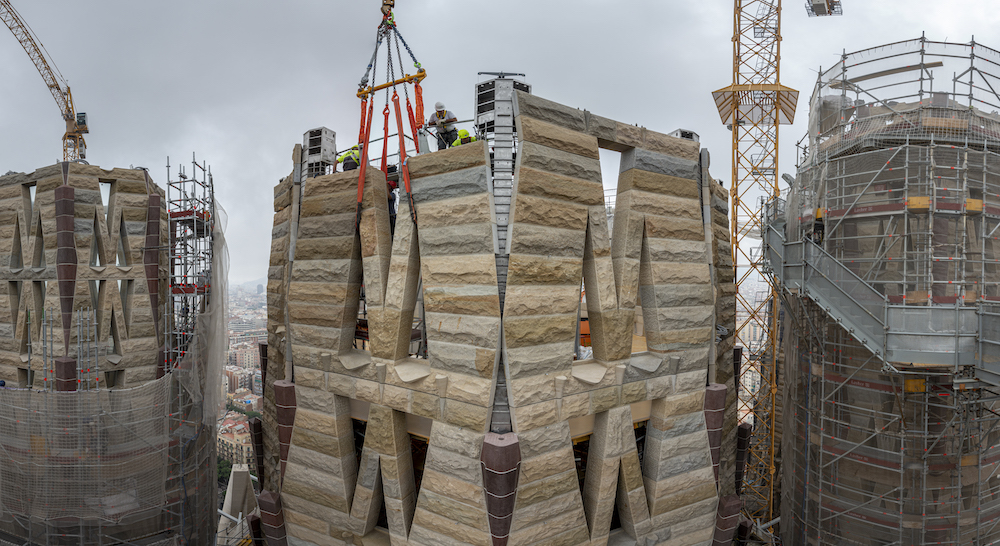 These months, the towers have not only grown in height, adding metres to their vertical path: we’ve also unveiled what they are like, both inside and out. So, in recent weeks we’ve removed the scaffolding that protected the towers of the Evangelists up to the eighth level, unveiling the work completed so far. This part is now visible from the street, starting to give a sense of the magnitude the Temple will have when finished. The towers of the Evangelists, like the rest of the central lanterns, are built of tensioned stone and have reddish arrises, the same colour as the ones on the tower of Jesus Christ.

Additionally, in recent months, we’ve also discovered the spectacular interior of the tower of the Virgin Mary, which will have white corners as a symbol of purity. Using ceramics and with the same intention that led Gaudí to use up to 19 tones of white in the Hypostyle Room at Park Güell, the rhomboids on this tower will have ten different shades of white. Plus, the inside will feature a huge skylight and work these months has been under way to cover it with enamelled ceramic tiles, also in white tones, and with trencadís mosaic, a technique reserved for filling the gaps between tiles. 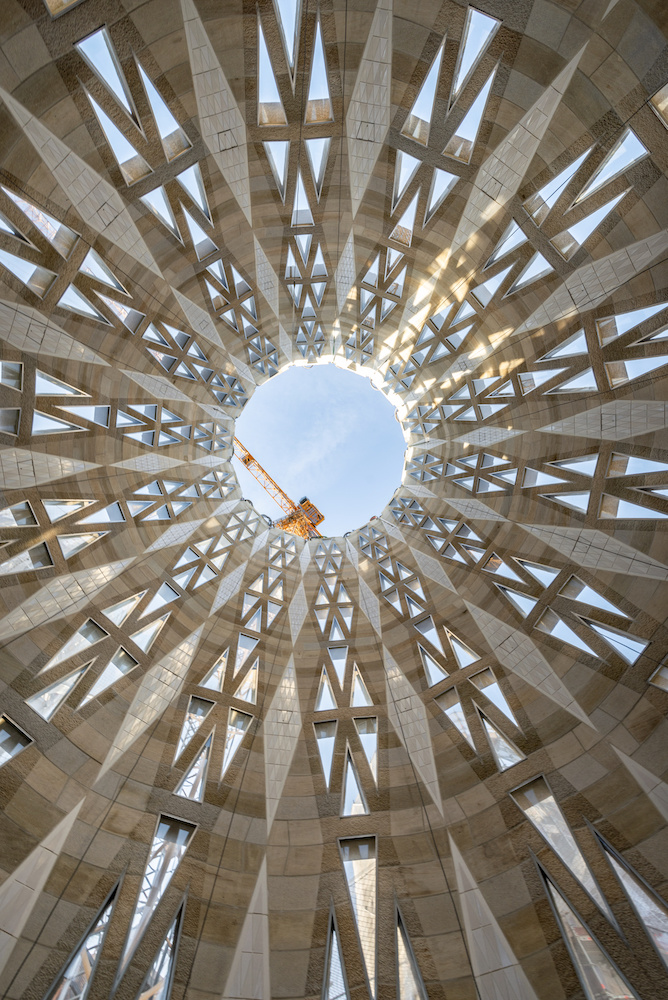 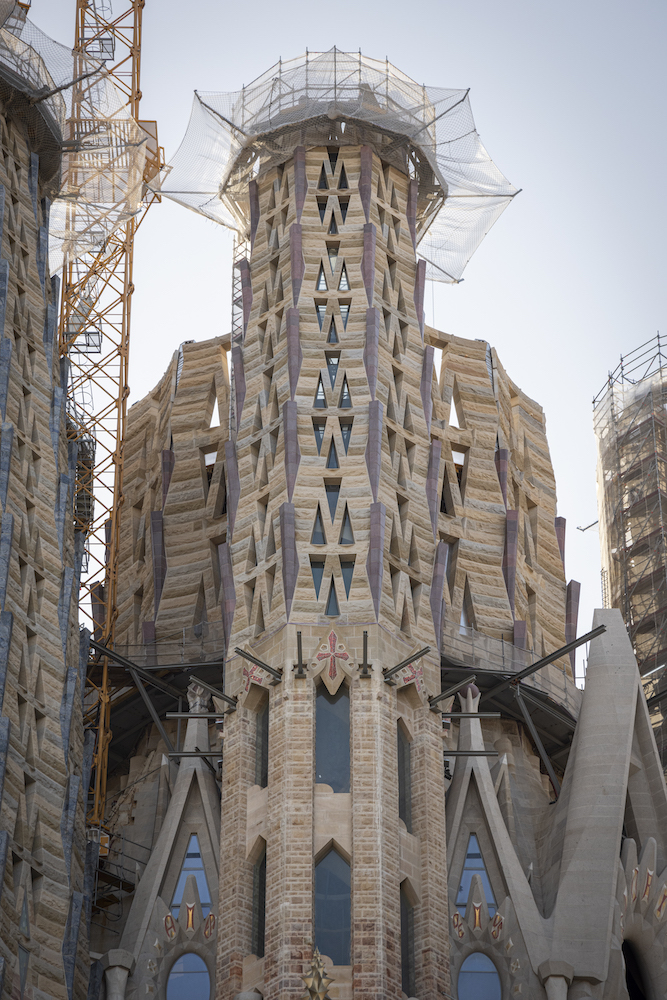 These months, the tower of Jesus Christ has not only grown on the outside; work has also been under way on the inside, where there will be a stone core with a staircase and lift. Recently work has begun to install the pieces that will make up the stairs and wall of this core. It is important to remember that the same technique is used for the staircase as the panels on the central towers: tensioned stone. So, at the Galera work site, the anchors are put into the stone stairs with a resin-injection system. This means that, once at the Temple, each stair is tensioned with the previous one. They will all be cast into the stone core and, to put them in, it has been necessary to prepare a helicoidal support along the lower face of the staircase. 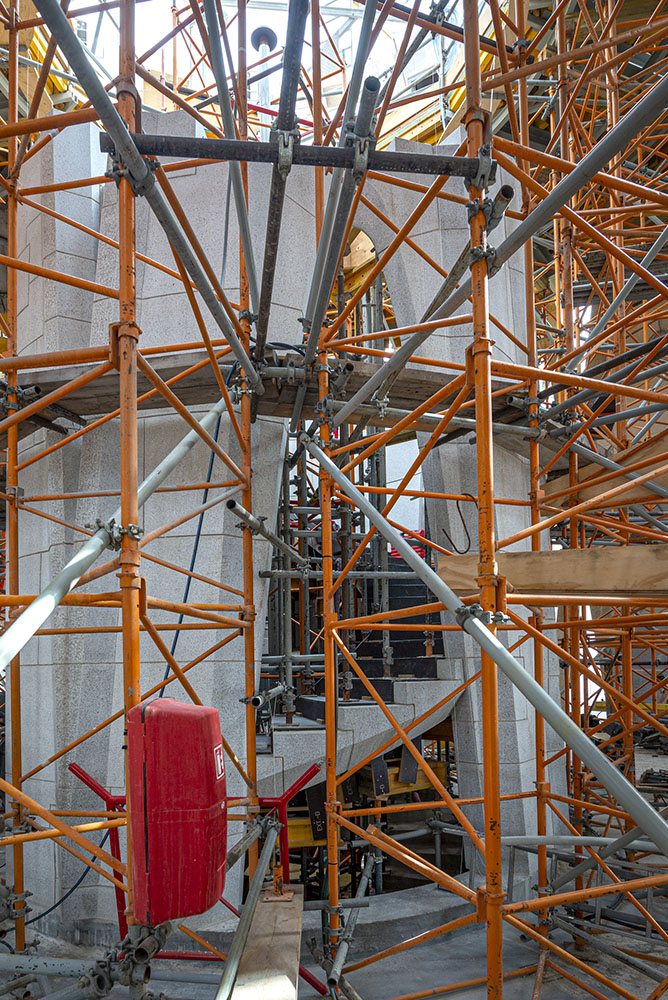 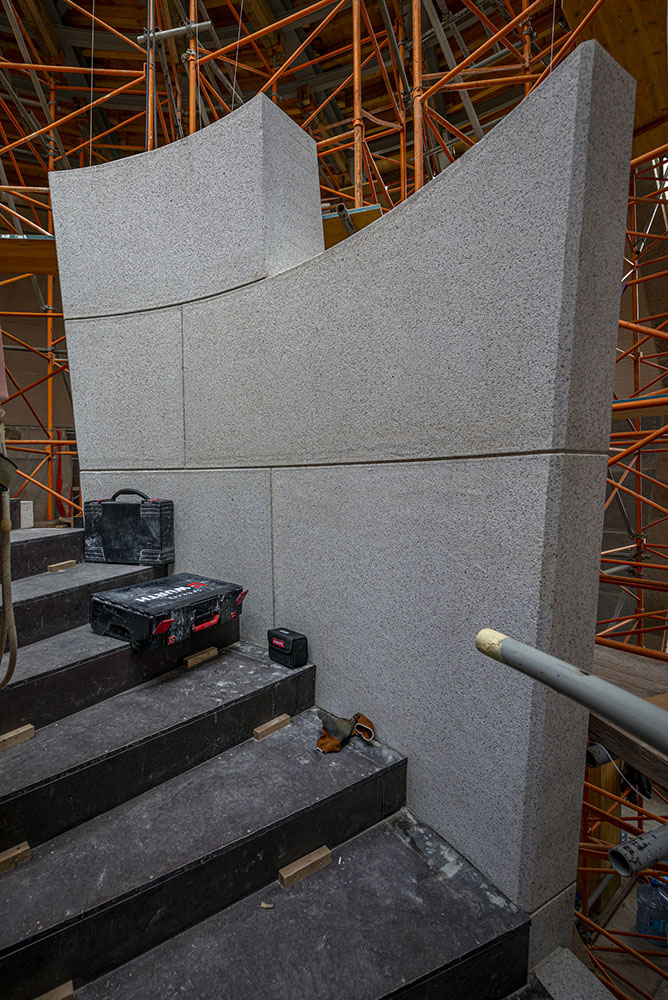