Warning: Use of undefined constant ‘bwp_template_redirect’ - assumed '‘bwp_template_redirect’' (this will throw an Error in a future version of PHP) in /home/customer/www/blog.sagradafamilia.org/public_html/wp-content/themes/blog-sagrada-familia-v2/inc/security.php on line 115
 A rood cross - Blog Sagrada Família

On the Passion façade, after finishing the garden and the quarry and putting in the sculpture group of the empty tomb and the acroterion on either side (the lion of Judah and the lamb of Abraham), there is only one element left to symbolically top off the whole thing: the cross of victory over death.

This cross is not the cross of sacrifice, which was sculpted by Subirachs and is already in place just below on the façade narthex, but a cross of glory, without Christ. The cross is included in written descriptions of the project and can also be seen in the first sketches of the Passion façade that Gaudí made in 1892. These drawings basically show a vector calculation that would be used to establish the inclination of the six columns on the lower narthex and the upper colonnade. 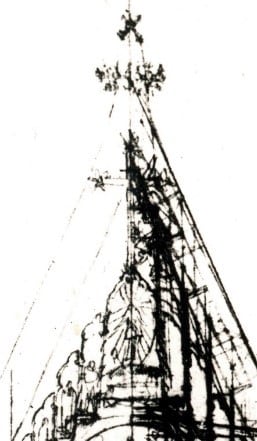 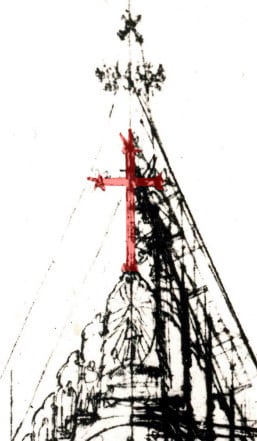 Gaudí finished the drawing of this façade in 1911. This large drawing, which shows the four bell towers on the façade, not only left a highly detailed illustration of the whole lower part of the plan but also included, in 1917, a monument to Bishop Torras i Bages, a personal friend of his. Like other plans Gaudí left, this one is also incomplete, and doesn’t include details from the cross up to the top of the bell towers

Moreover, following the instructions in texts describing the project left behind by Gaudí’s direct collaborators, there are three angels that sit at its base. Of these three angels, one represents worship, with hands raised towards the cross; another shows love, caressing it; and the third is kneeling and raising a hand with the chalice of Christ’s blood, level with the base of the cross.

Sculptor Lau Feliu was commissioned for the sculptural project of these three angels and has been working for months on the project in constant contact with the architects at the Sagrada Família. In fact, before the sculptural work, the structural calculations must be completed for the project. Now, with the various pieces that make up the group completed, the cross is expected to be put in place next month. 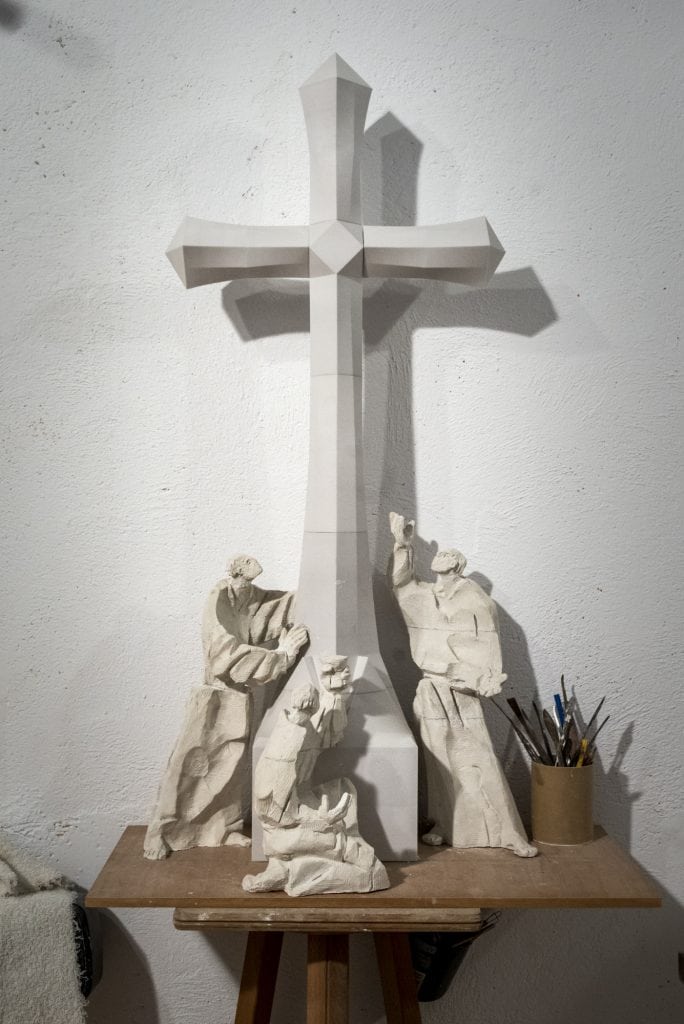 THE GEOMETRY OF AN 18-TONNE CROSS

There are two plaster fragments of the original models of this cross, and fragments of a mould for them. After studying them carefully, the team was able to extract the shape and proportions quite exactly. This study was also used for the geometric guidelines to design the great central cross that will top the tower of Jesus Christ and, thus, the whole building.

The geometry of each of the cross’s arms is a double twist, the same as is used on the Temple columns. So, based on a central core with square faces, the arms grow out of the square cross section and, with a double twist, transform into an octagonal shape halfway along the arm. Then, continuing toward the end of each arm, they keep turning until they go back to a square and end in a fairly flat square-pyramidal tip. The foot of the cross is designed, geometrically, just like the arms, although it is longer and transitions into a larger square base. 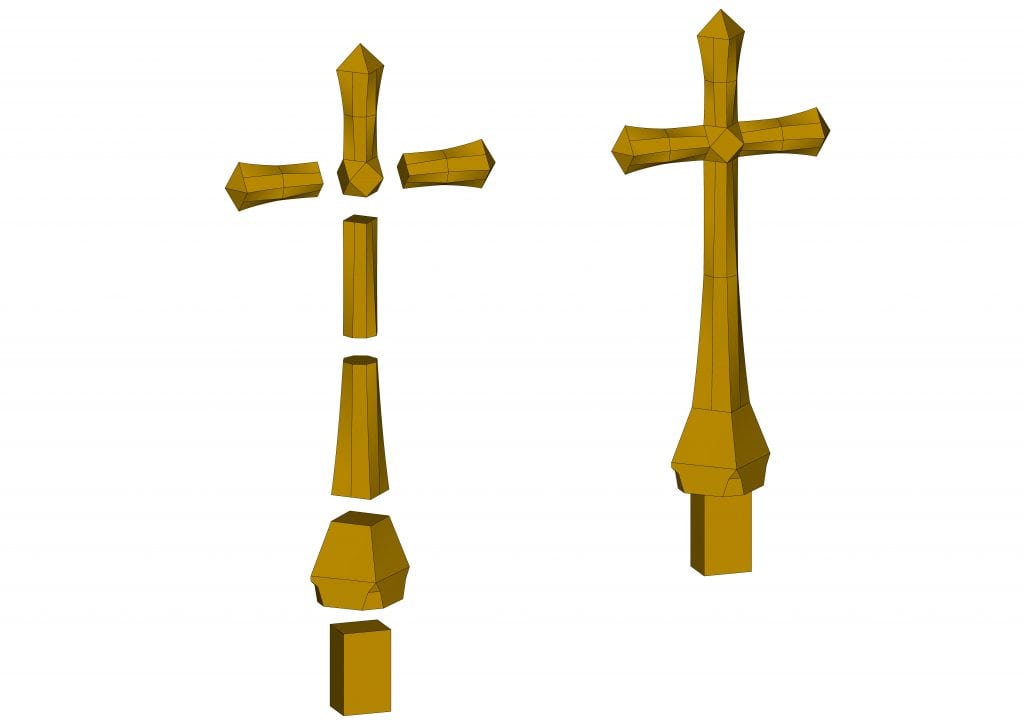 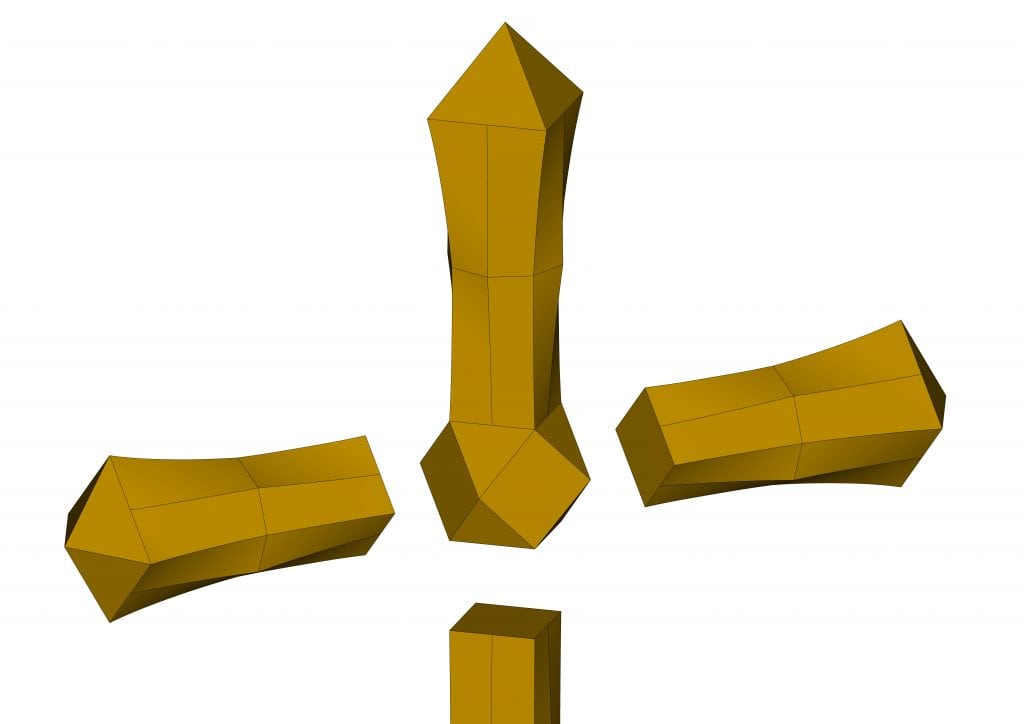 The arms, the foot and the head of the cross connect beautifully in a central polyhedron with eight triangular and six square faces, although only the front and back squares are visible; the rest are where the four parts that make up the cross start.

The cross is 7.5 metres tall, exactly the base module used for the geometric design of the floor plan and heights of the whole Temple, and half the height of the upper narthex. In terms of width, measured from the tip of one arm to the tip of the other, it is 4.25 metres wide and weighs a total of 18 tonnes.

THE STRUCTURE, ALSO IN TENSIONED STONE

Structurally, this cross is a complex element, as it is only attached at the base and therefore has a lot of exposed surface. This, along with its considerable width, which gives the arms considerable lift, makes it a real challenge. So, after the positive experience with the tensioned panels on the towers, the team decided to use tensioned stone for the cross as well, with steel bars piercing the inside of the cross pieces like a needle to compress the stones against each other and make the whole piece more resistant to the wind and earthquakes.

The tensioned stone system has made it possible to build a solid stone cross. The stone chosen is a granite from the French region of Tarn, which was also used on the pediment of the Passion façade, the great colonnade, the lion of Judah and the lamb of Abraham. The angels, however, are done in Roman travertine, a stone used since antiquity for its noble quality and used on this façade to highlight unique sculptural elements, like the sculpture of the flagellation, by Subirachs, or the angel sitting on the stone that covers the entrance to the tomb, by Fajula. 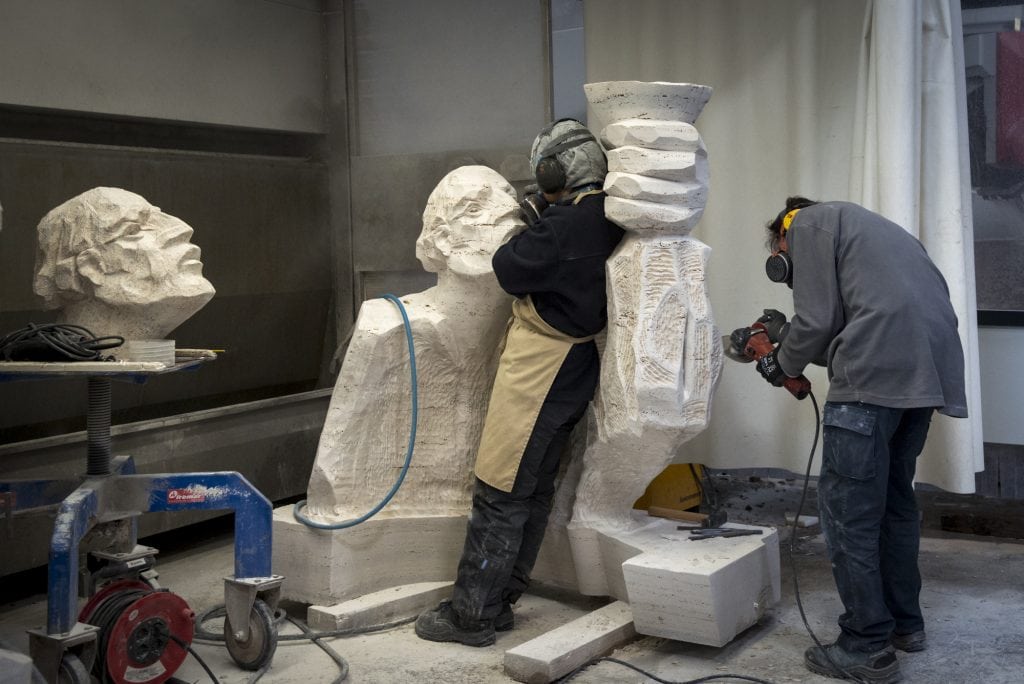 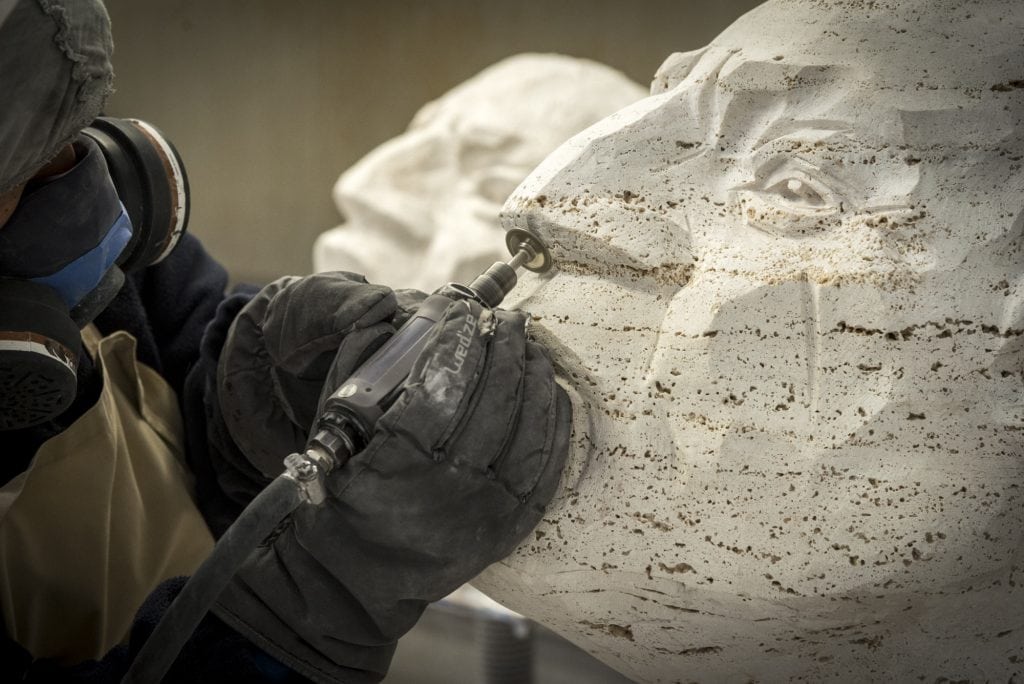 Finally, it is worth noting that the Passion façade has a notable ascending composition, like the whole Temple project. So, we can see how the extension of the master lines from the pediment and the balconies with the sculptural groups on the façade converge, from right to left, at the same points that structure the composition of the whole façade. These lines become increasingly steeper, and the highest line is that which leads up to the top of the cross, which then points up to the resurrected Christ above.