Over the coming days, we’re planning to put in the first of four bridges that will connect the towers of the evangelists to the tower of Jesus, on the tower of Luke. And the rest we’ll be seeing in their place soon, from now through mid-May. All of them will be 85 metres above the Temple square, above the technical floor in the tower of Jesus, which will serve the whole tower. They aren’t the only bridges between towers at the Sagrada Família – the façade towers have them, too – but these are different. And in this post, we’ll tell you what they’ll be like, the materials they’re made of and how they’ll be used.

The two towers on the side closest to the mountains, the towers of Luke and Mark, the first to be put in place, will be part of the route visitors will take up to the central lantern: from the apse, they will take the lifts to 45 metres above ground, where they will find an inclined bridge with steps taking them inside the towers of the evangelists. Once inside these towers, visitors will take a second lift up to 85 metres, where each of these bridges will connect to the tower of Jesus.

The bridges on the side closest to the mountains will be the only ones that connect the Temple square to the tower of Jesus by lift. Although the towers of the evangelists on the side closest to the sea, Matthew and John, won’t have a lift inside, they will have a spiral staircase that can be used as an alternative evacuation route in case of emergency. In any case, the route up to the tower of Jesus must pass through the evangelists. So, in a way, this makes the towers of the four evangelists a type of hub, channelling access to the tower or central lantern. 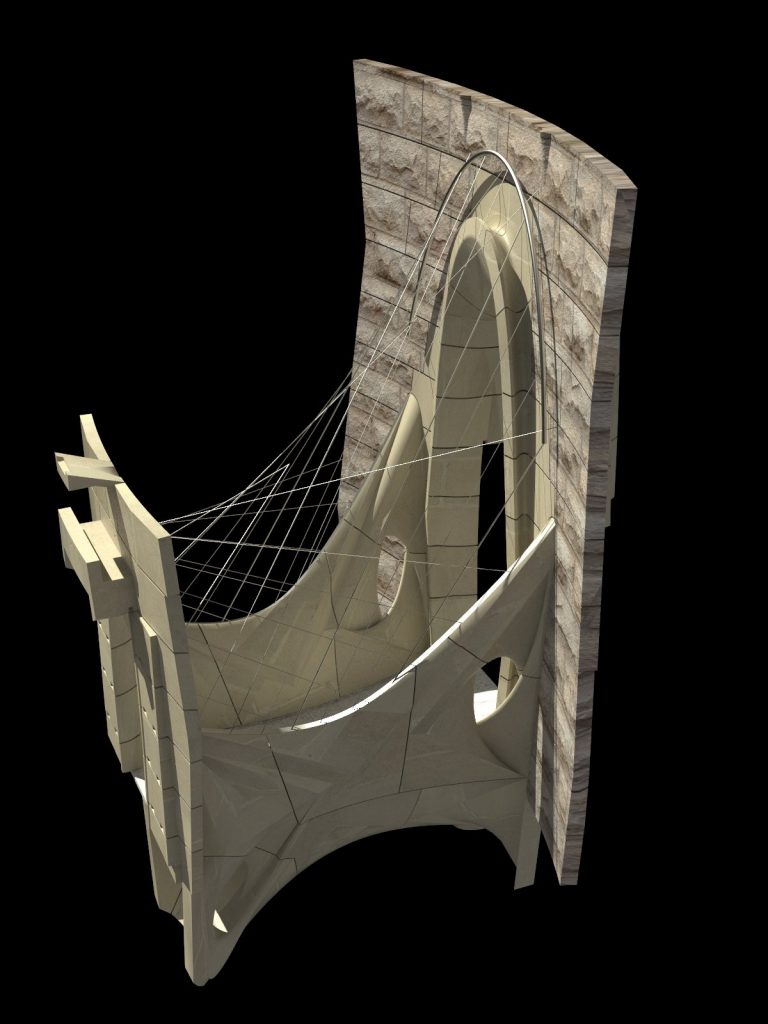 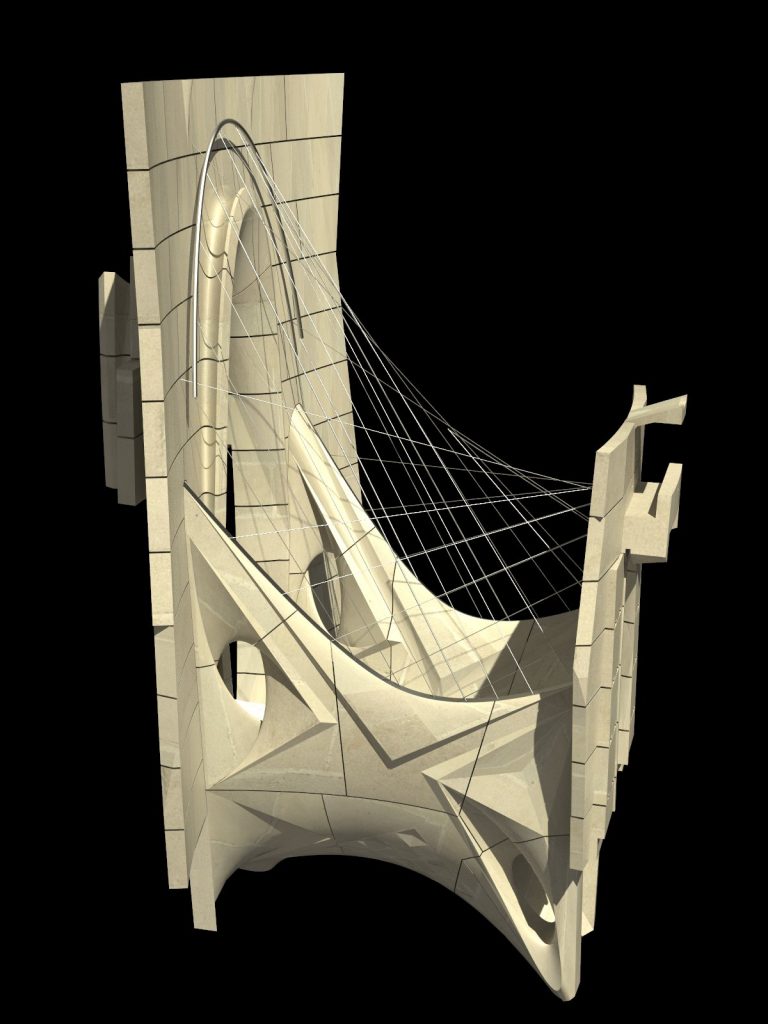 Their most characteristic element is that all of these bridges have side walls made of interwoven paraboloids, making them truly light and dynamic. But, although they fit in the series of bridges designed with ruled geometry, the bridges on the towers of the evangelists are unique, as they are built on the base of a slightly inclined elliptical hyperboloid. This can be seen from outside and inside, when crossing them. This unique geometric base features a floor plan that follows the two branches of the hyperboloid, elliptical arches as entrances to the towers, and a slight incline of 18 centimetres between the towers of the evangelists and the tower of Jesus.

MADE OF THREE TYPES OF STONE

The four bridges of the evangelists are open air and 3.5 metres long, from the door of one tower to the door of the other. The width varies, as the floor plan is hyperbolic, but at floor level ranges from 1.3 to 1.7 metres.

The lower half of the hyperboloid is stone and concrete and makes up the bridge itself and the railings. The upper half, however, is just cabling that follows the generatrices of the base hyperboloid surface, acting as protection.

These bridges are built mainly of stone, giving the deck a bulging shape, like a boat, with space inside for structural elements (a reinforced concrete slab), all sorts of utilities (power, water, waste water, lightning rod, data and safety signals, etc.) to ensure the main tower is well connected to the rest of the building.

As with the rest of the towers, the aim was to find a series of different stones that, together, would recreate the chromatic richness of Montjuïc stone: the special, original genuine stone of Barcelona that Gaudí used to build the Temple. So, for these bridges we have used Cantabrian sandstone, English beige and fine-grained granite from Lugo (Galicia). In total, each bridge will have sixteen pieces, the largest weighing approximately 1,200 kilograms. 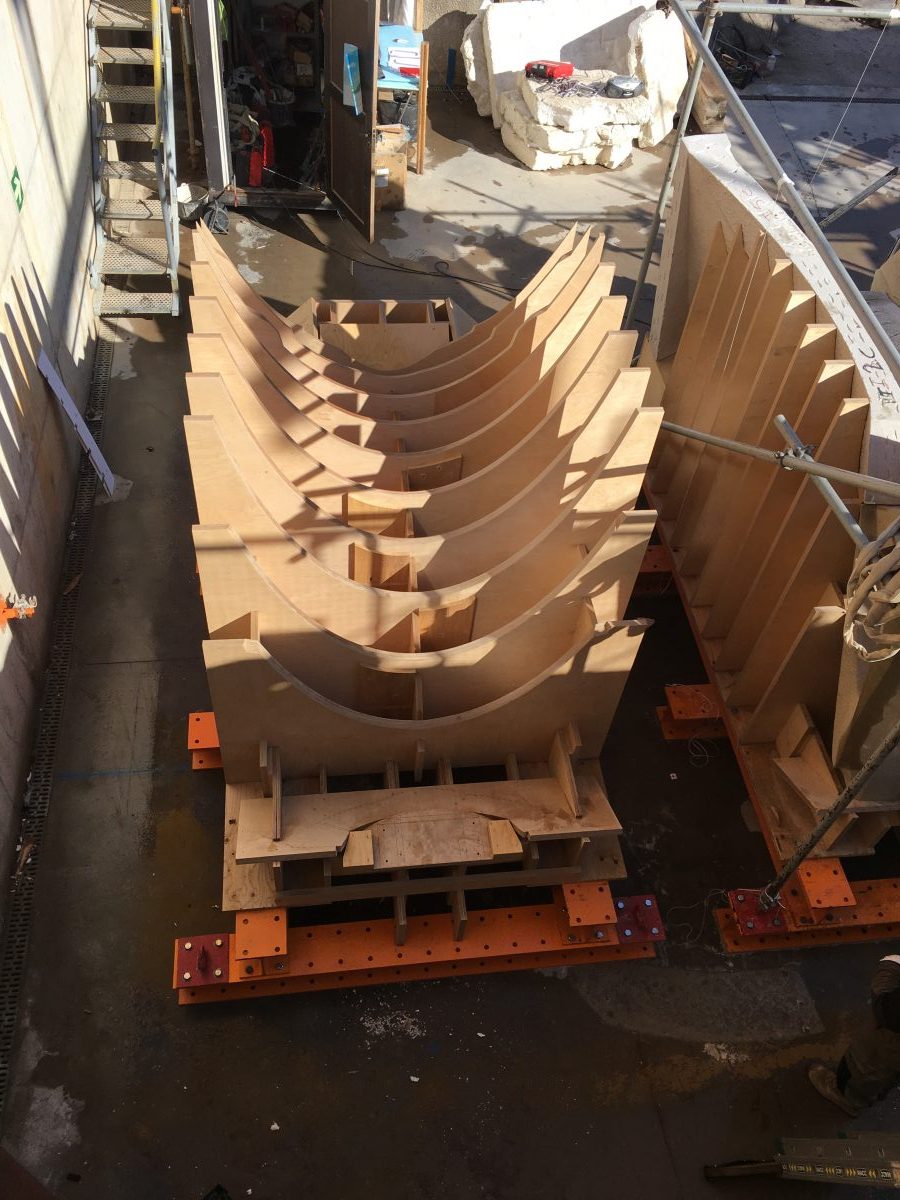 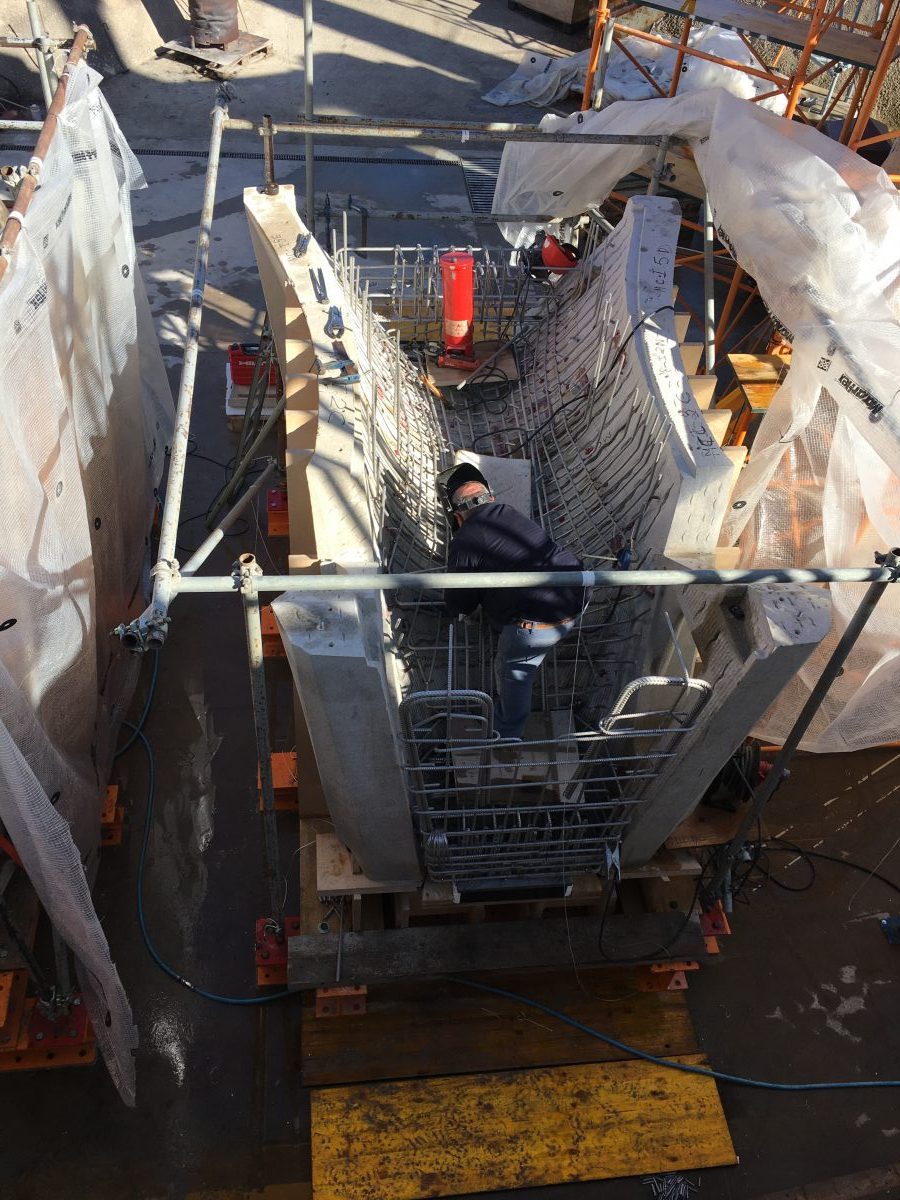 As we mentioned before, the first of the four bridges of the evangelists will be put in place in the coming days and by mid-May they should all be installed. The ones on the side of the Nativity façade, joining the towers of Luke and John to the tower of Jesus, will be installed provisionally, without railings, to be used as platforms for offloading materials while building the towers. Then, with the railings in place, if a large package ever had to be taken into the towers (heating and cooling equipment, new windows for the core, lift parts, etc.) these same bridges could be used for the materials.

Finally, it must be noted that from a construction standpoint the bridges have a significant influence on their immediate surroundings. Structurally, they are built into the tower of Jesus and have a seismic joint on the side of the towers of the evangelists, which in itself is quite a challenge. They will also have sliding doors to better regulate temperature and draughts inside the tower of Jesus, which means the panels where the bridges connect are very special. This, among other reasons, is because they can’t be pre-assembled in Galera like the rest of the panels and must be executed on site to ensure they are done properly, given their technical, architectural and structural complexity and the utilities involved.