Stone is the main architectural element of the Sagrada Família, and it has been since construction began under the oversight of the Temple’s first architect, Francisco de Paula del Villar. When Gaudí took over the project in 1883, stone was still the primary material used. At that time, the stone came from Montjuïc, the mountain within the city of Barcelona, although after Gaudí joined the project he also began to use stone from up to seven other quarries, all of them relatively close to the city. However, the quarries of Montjuïc closed, and this forced him to scour the entire world for stones. The goal was to find ones that shared the characteristics of their local counterparts, which are truly unique in their quality and colour. None of the stones found was identical, so the Sagrada Família had to combine the stones used in the central towers to simulate the variety of colours found in Montjuïc stone. Since then, up to sixty different kinds of stones from forty different quarries around Europe, Asia, Africa and South America have been used. Upon leaving the quarry, many of them have a first destination: the Sagrada Família’s workshop in Les Borges Blanques (Les Garrigues).

This town in southern Catalonia is the home to what could be considered kilometre zero of the work done on the stones used to build the Temple. Indeed, this workshop is a space as large as two football pitches where stones from around the world are received, subjected to quality controls and then cut into slabs or smaller blocks which are later sent to the industrial engineers manufacturers to give them their final volume and shape. These stones then go to the external workshop in Galera, where the different pieces are pre-assembled. The Basilica and their final installation in the Temple itself conclude this journey. Therefore, the Borges Blanques workshop is a crucial step in maintaining the current pace of construction and meeting the deadline for completing the Sagrada Família, which is scheduled for 2026. It is also essential in guaranteeing the quality required of this monumental project.

The workshop in Les Borges Blanques began operating in late 2012. Prior to that, the stones were received, their quality was checked and they were cut in the workshop of a company located in Vinaixa (Les Garrigues). However, this space became too small when it was time to start building the Temple’s central towers, which have been under construction since late 2016, and moving the service provided a greater capacity to undertake the first intervention with this stone. The outdoor area used to store the stone, which was enlarged last October with a new area measuring 1,800 m2, has a capacity to hold 9,000 m3 of stone. Currently, 8,000 m3 of stone from 36 different quarries is stored there. This year, 4,300 m3 more will arrive, equivalent to 11,500 tonnes, and 500 lorries will be needed to transport this volume. Last year, 1,000 lorries carrying 7,500 m3 of stone arrived at the Les Borges Blanques workshop. 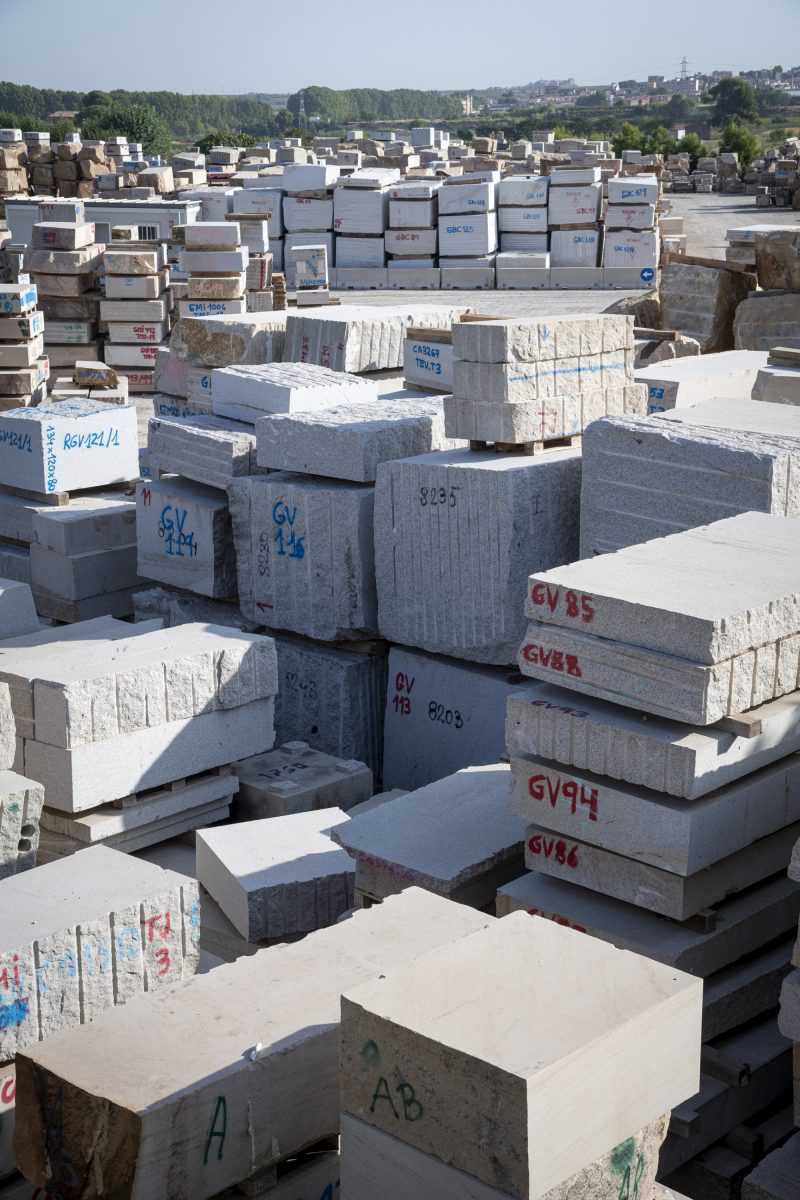 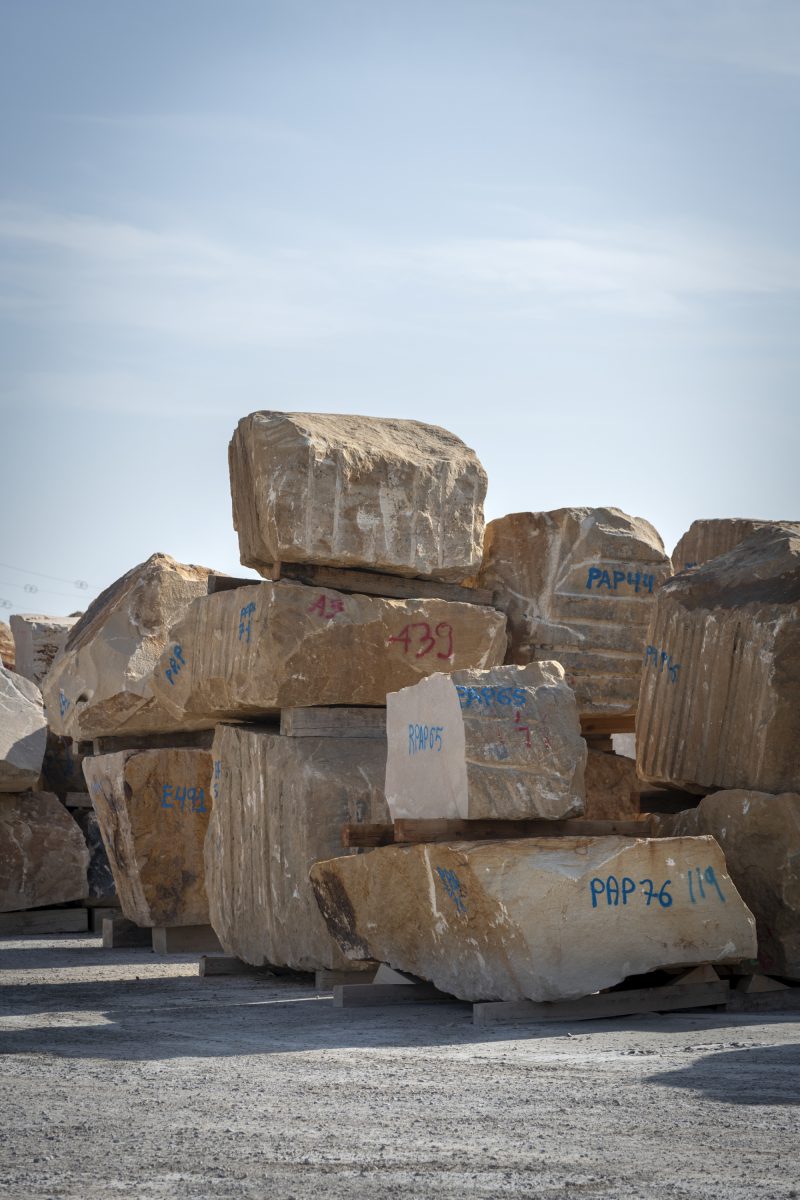 A UNIQUE CENTRE IN THE WORLD OF CONSTRUCTION

When the stone blocks reach this workshop, the first thing that happens is they are stored in one of the outdoor areas. Afterwards, they are taken to one of the warehouses, where each block’s resistance to compression and flexion is tested. A small test cylinder is extracted from each piece, after which the stone is classified and its optimal location in the Temple is determined, depending on its characteristics. In another warehouse, these irregular blocks are cut into smaller slabs using eight diamond wire cutting tools. The blocks have to have two completely parallel faces, and there can only be at most a 3-millimetre deviation in the cut, a very small margin of error which can only be achieved with precision cutting machines like those using diamond wire. 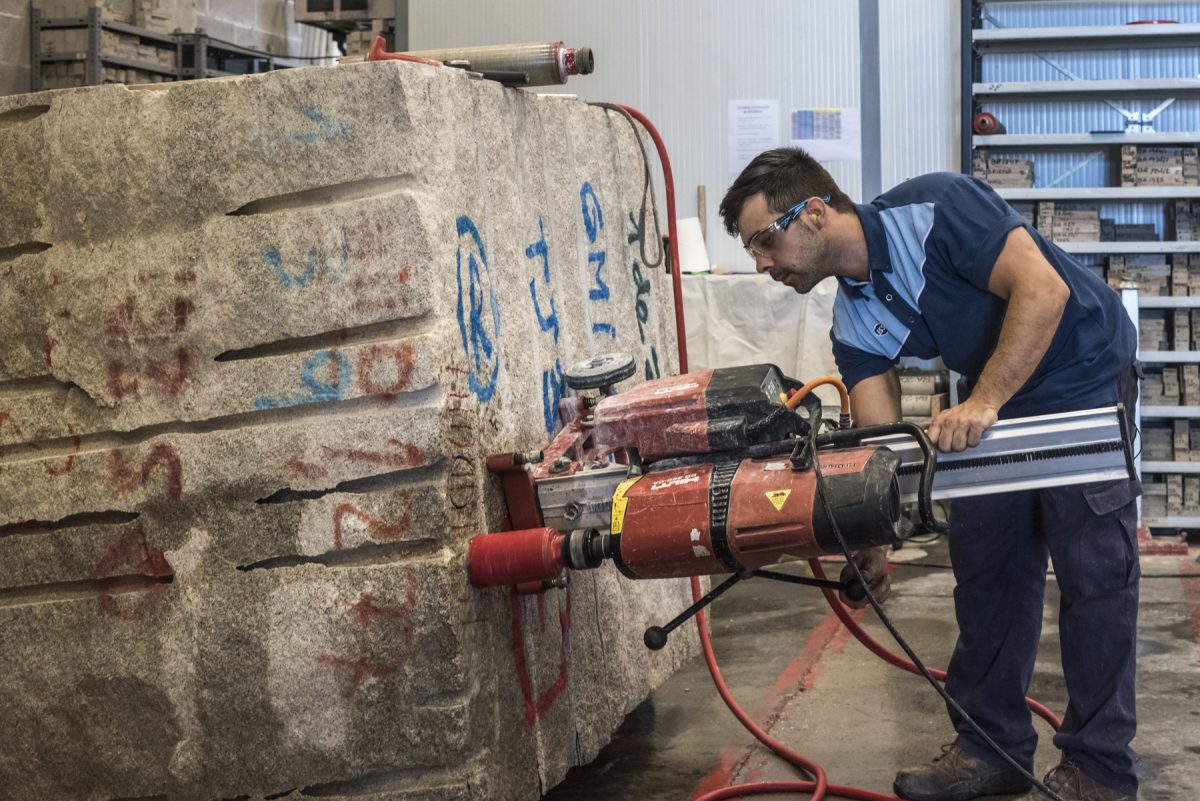 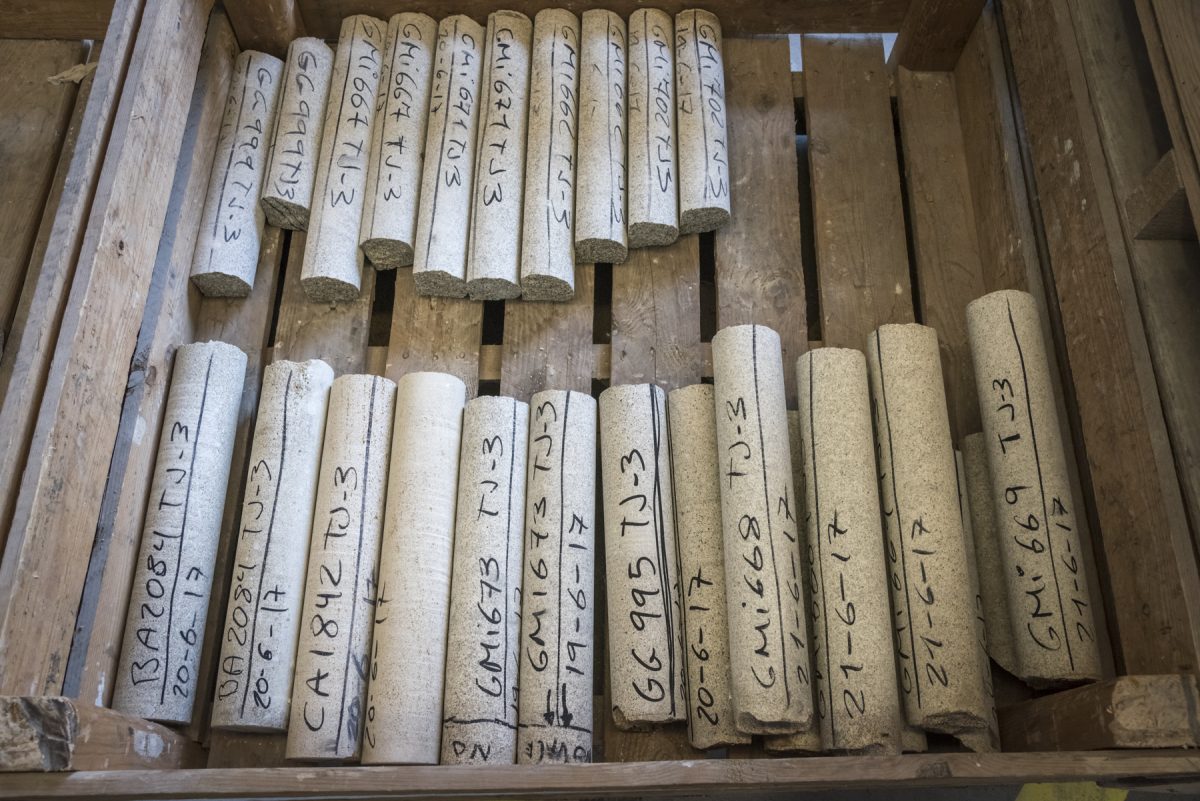 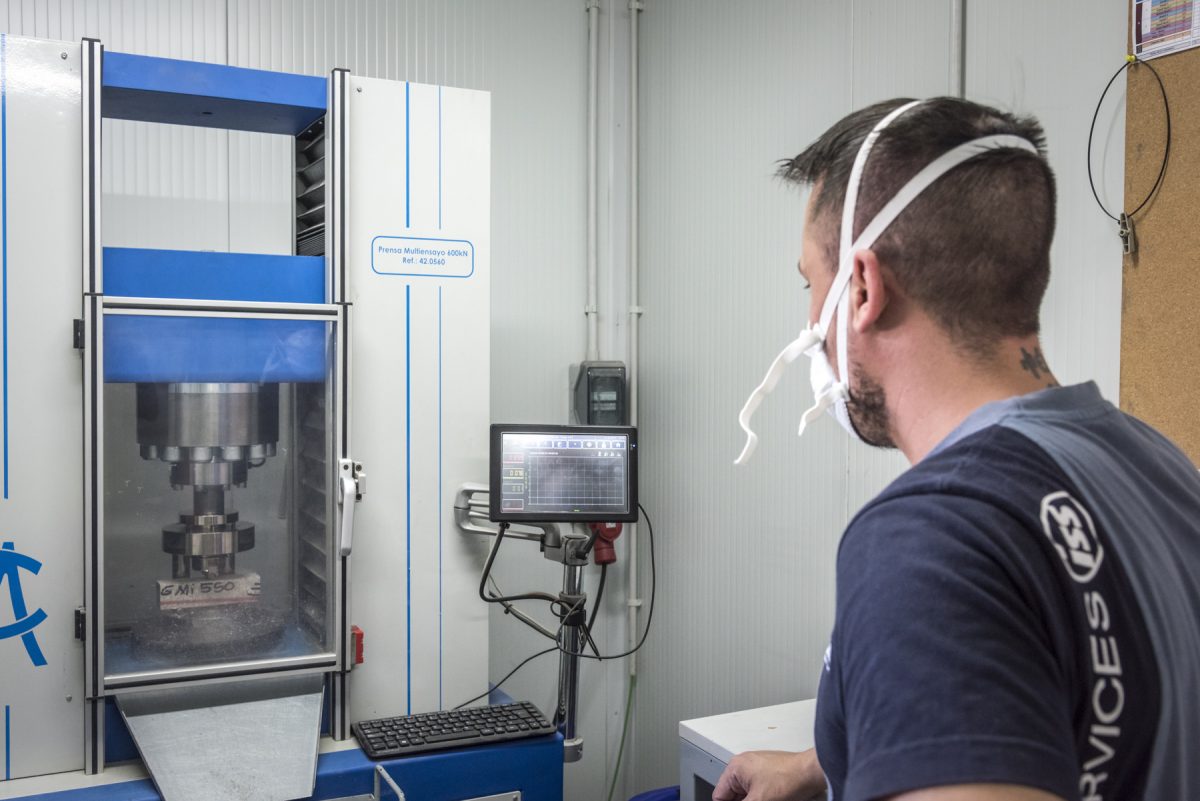 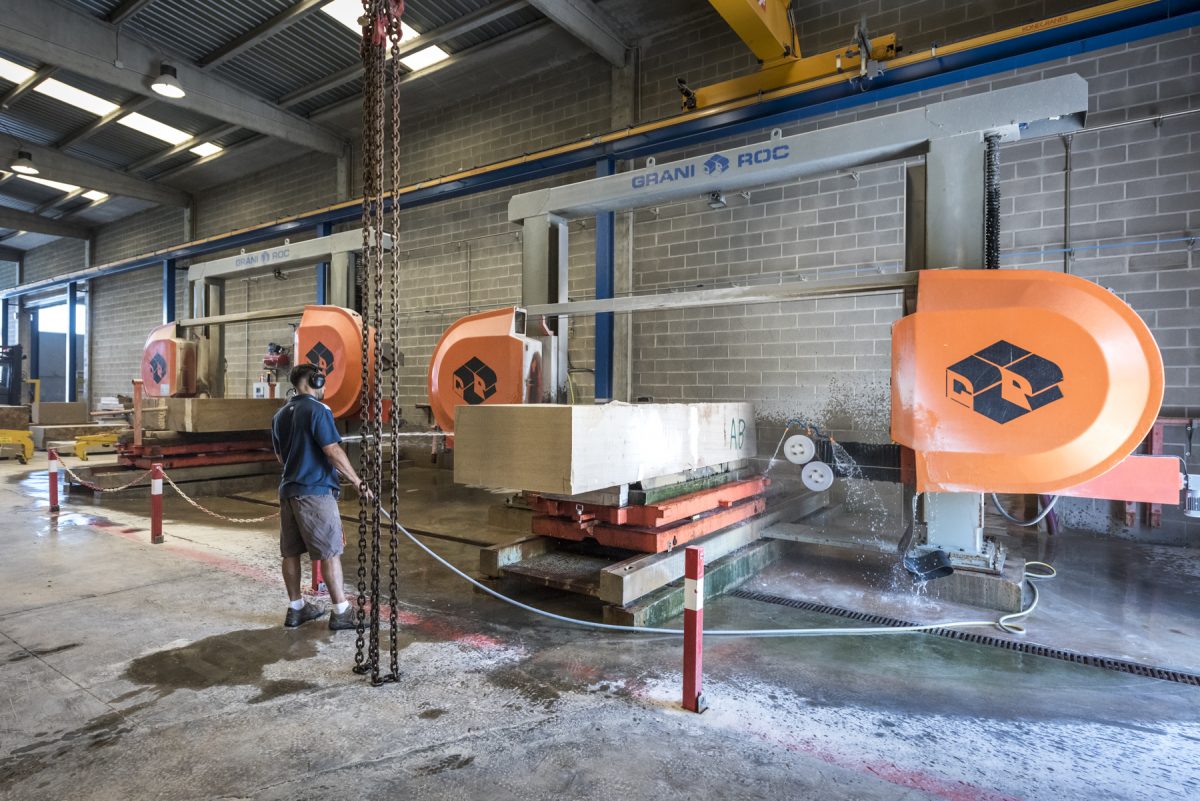 The slabs are then sent from this work centre to the different industrial workshops that partner with the Temple, where they are given their final shape. These slabs are actually marked with the exact location where the piece is to be installed to make sure that they are put in the right place. The logistics workshop in Les Borges Blanques may be located 150 kilometres from the Sagrada Família, but it is fully integrated into the complex web of jobs and sites that make the Basilica possible. Plus, it is totally unique in the world of construction because while there may be other stone-cutting workshops with similar machines, the fact that this one operates as a logistics centre is an exception in the industry, which only further reinforces the singularity of the construction on the Sagrada Família.