Warning: Use of undefined constant ‘bwp_template_redirect’ - assumed '‘bwp_template_redirect’' (this will throw an Error in a future version of PHP) in /home/customer/www/blog.sagradafamilia.org/public_html/wp-content/themes/blog-sagrada-familia-v2/inc/security.php on line 115
 Bell towers and central towers - Blog Sagrada Família

When we explain the project for the Sagrada Família, we often say it will have eighteen towers, putting the ones on the façades in the same sack as those in the centre of the Temple. However, although it is true this is the number of towers Gaudí had in his plans, there is a very important difference between the shape and function of the two types.

So, to differentiate between them, we call the ones on the façades bell towers and the central ones, lanterns.

BELL TOWERS: FROM SECULAR TO RELIGIOUS USE

The term bell tower is clear; there’s no doubt that it refers to a tower with a bell. Although they can be associated with a clock and the chiming of the hours, churches normally also use them for communication purposes. Today this knowledge has mostly been lost, but people used to know how to interpret the bells, distinguishing, for example, between bells calling parishioners to mass, warning them of danger or tolling for the dead. So, bell towers with ties to the church became much more common that ‘secular’ bell towers.

Large cathedrals normally have one bell tower or sometimes two, one on either side of the main façade. So, why did Gaudí want twelve, six times more?

THE APOSTLES AND THE BELL TOWERS

For the Sagrada Família, Gaudí associated the bell towers with the twelve apostles, which is why he put four on each of the three façades. The bell towers grow in height, from the Nativity façade to Passion and Glory, always in groups of four and always symmetrically, getting taller towards the centre, because not all of the apostles are equally important.

Of the twelve apostles, in fact, there are two who became evangelists, John and Matthew. Gaudí dedicated a central tower to each of these two, which are even taller than the ones on the façades.

So, if we don’t count these two evangelists and the traitorous disciple, there were three vacancies to reach the symbolic number twelve, an issue Gaudí resolved by adding Matthias who, according to the Acts of the Apostles in the New Testament, took Judas’ place and Barnabas who the same document says was a disciple with very close ties to the apostles. Gaudí chose them for the shortest towers on the Nativity façade. The last vacancy was covered by Paul, an apostle who didn’t know Jesus directly but who wrote more epistles than any other, setting doctrine.  He was a Pharisee named Saul who persecuted the Christians before converting after having a vision of Christ that made him fall to the ground. “Saul, why do you persecute me?” asked the vision. Paul was his Christian name and he became such an important apostle that Gaudí put him next to the main entrance, with Peter, considered the first bishop of Rome. 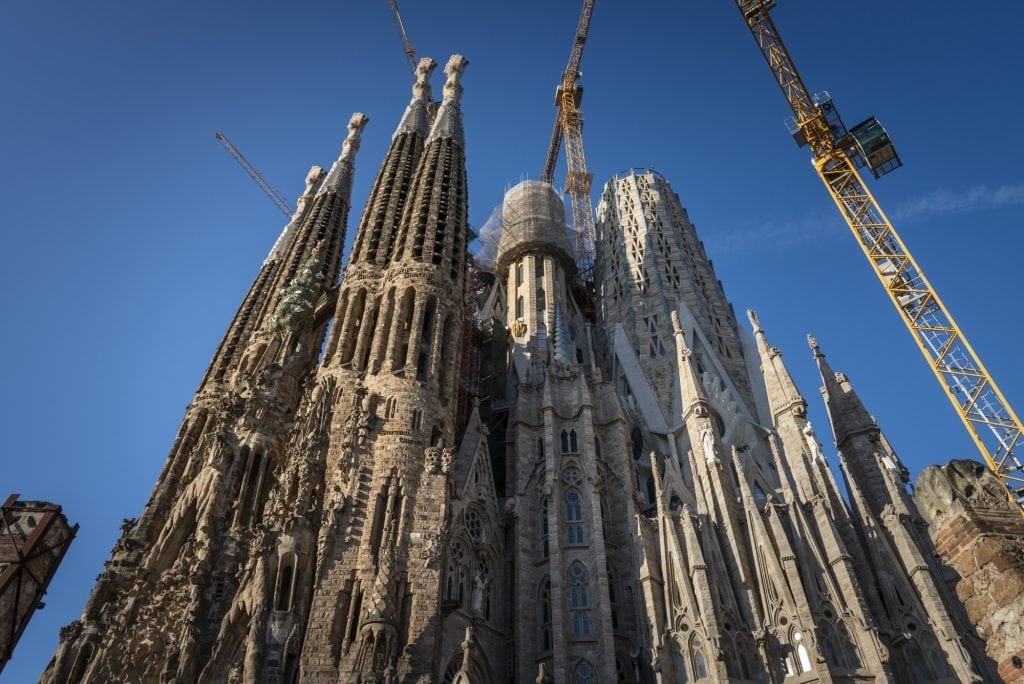 LANTERNS: LETTING LIGHT IN FROM ABOVE

The word lantern, with this meaning, is less commonly known, however. It refers to an architectural element that brings height to the central space inside a temple, while at the same time letting light in from above through its windows. They are normally located over the crossing of the main nave and transept, letting light into the heart of the Temple not only as a symbol but also to better illuminate this part of the church, which would be very dark otherwise as it is far from the façades, where the windows are normally located.

They tend to have an octagonal floor plan, as the octagon is the transition between the square and the circle, the two geometric shapes found where it is located: the intersection of the two rectangles that make up the cross floor plan forms a square and the semi-spheres of the domes often have a circular base.

Normally, cathedrals have only one lantern, located over the crossing, but for the Sagrada Família Gaudí also multiplied this by six. So, the Basilica has six central lanterns. 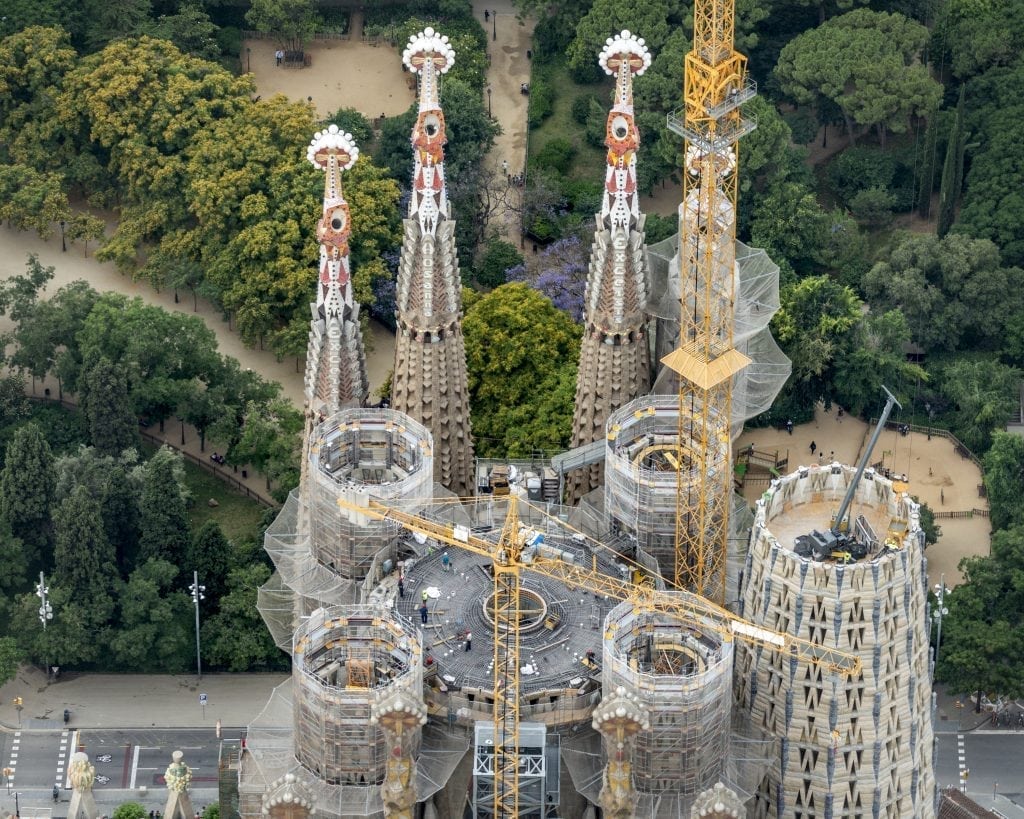 ABAT-SONS: WHAT MAKES A DIFFERENCE

Many bell towers had tilted wooden slats in the openings to direct the sound downwards, known as abat-sons in France. As form follows function, at the Sagrada Família these pieces are made of stone and their presence is so important that they give the towers at the Sagrada Família their characteristic shape. It is these old towers that will become bell towers as soon as the Temple is complete and its voice can be heard, as Gaudí used to say in referring to the sound of the bells, produced by a carillon and not a recording of this instrument, as it is now.

These abat-sons are the big difference between the two types of towers: the bell towers have them and the central lanterns don’t.

This is why the central lanterns won’t have the same recognisable shape as the towers we see today. The lanterns capture sunlight and ennoble the Temple, and Gaudí left writings explaining that the sacristy domes, for which he left a highly detailed model, should be used as the model for these towers. This way, instead of the abat-sons, they will have triangular windows and be much taller and thinner than the sacristy, as the model has been significantly stretched vertically to reach the height established in the various profiles of the project drawn by Gaudí himself and his collaborators.