Construction of the Sagrada Família is full of challenges. One of them has undoubtedly been building the central lanterns. Now that these are on track and about to start changing the Temple profile, the next important challenge will be the main façade, the Glory façade.

As we explained in a previous post, work is currently under way on the preliminary project. This document will establish the basic shape of the vaults, columns, narthex and chapels: the Chapel of Penitence and the Sacrament on the right end of the façade and the Baptistery, on the left. Where this second chapel will stand, work has recently begun on the basement spaces, requiring a fence to be put up along the street. The works, however, involve more than just these underground spaces, as they are the continuation of the Glory façade.

In fact, construction on this façade began in 2001. This was when an important foundation was laid, made up of two large concrete footings each supporting two of the four towers on this façade. These huge cement structures each tie into 27 pilings that are 1.25 metres in diameter and were driven 17.5 metres under Carrer de Mallorca, along with the perimeter screens.

So, by laying the concrete reinforcements, the profile of the Glory façade was drawn and construction began, raising the columns that will support the bell towers to roughly 9 metres from the floor.

After a decade with hardly any work in this area, construction of the basements once again brought building activity to this façade. The preliminary work before beginning this excavation was complex, having to move the services located on the corner where the Baptistery will be located, including the IT centre and workshop of the Temple artists. It also included re-routing various types of installations. 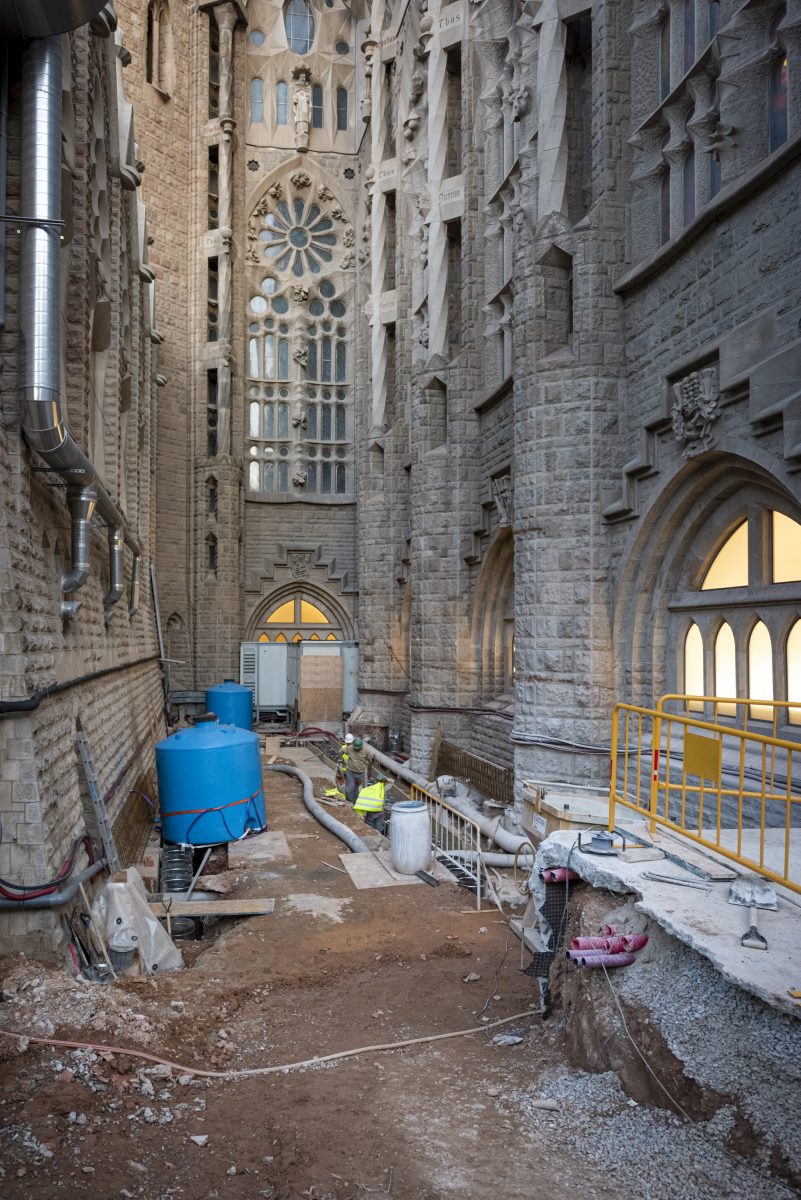 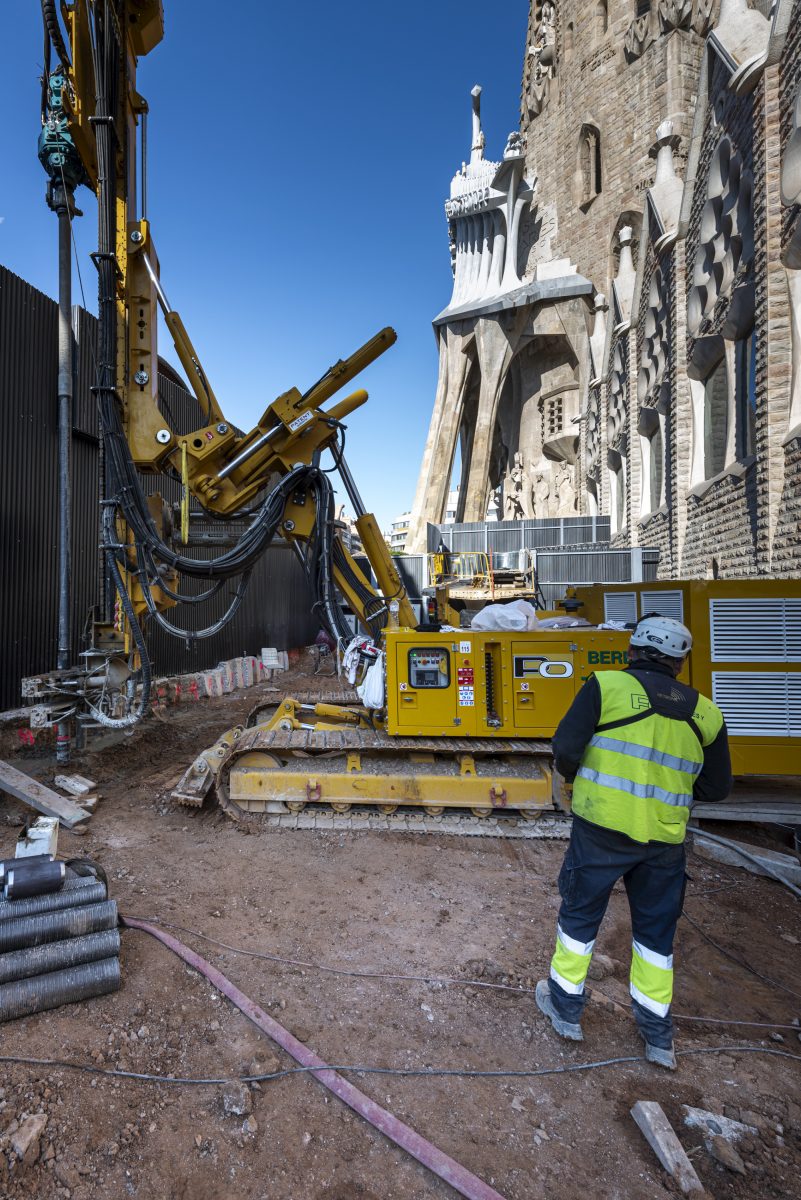 ONE LOWER FLOOR AND TWO BASEMENTS

In general, the Temple will have two basement levels, however it is important to note that the ground floor of the Temple, measured in the nave, is 5 metres above the level of Carrer de Mallorca, on the downhill side, and just 1 metre above Carrer de Provença, on the uphill side. So, the area where the museum is located isn’t a basement, strictly speaking. Seen from Carrer de Mallora, it is another floor at street level, called the lower ground floor.

With the Baptistery, there will be two basement levels and they will stretch to the schools and along the perimeter of the part of the Passion cloister that has already been built, the cloister of Our Lady of Mercy. In terms of use, each level will be different. So, the lower ground floor will be part of the public spaces, associated with dissemination activities. The first basement will house offices for several departments. And the spaces on the second basement level will house various Temple facilities. 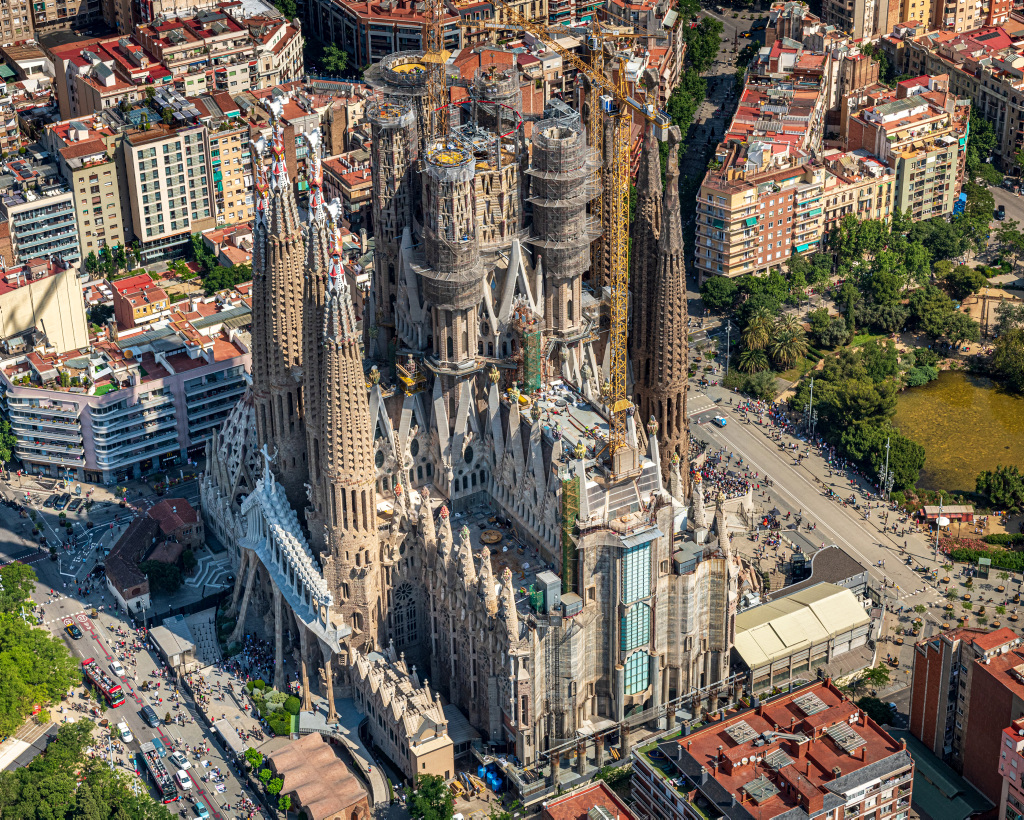 RELATIONSHIP BETWEEN THE BAPTISTERY AND THE SACRISTY

In Gaudí’s project, both the Baptistery and the symmetrical Chapel of Penitence and the Sacrament are highly significant, creating the corners of the building on the downhill side. They play a similar role to the monumental sacristies on the uphill corners. So, despite the differences, there are quite a few similarities between the Baptistery and the finished sacristy. On the one hand, both elements are designed with a double-ring structure. This means there is a circle of inner columns and a larger, outer circle that incorporates the perimeter walls and small buttresses. On the other hand, in both cases, the path of the cloister runs along the perimeter, which at the Basilica skirts the whole Temple. Furthermore, both constructions are quite tall: the Baptistery stands 45 metres and the sacristy, 38 metres.

Nevertheless, there are also significant differences between these two buildings and their geometry is surely the most important. So, the dome of the sacristy is made up of twelve paraboloids to cover a wider space, roughly 18.5 metres in diameter, while the Baptistery is practically one geometric surface, a hyperboloid, but elliptical not circular, covering a smaller space, with a floor plan of 15 x 14 metres.

Therefore, the Baptistery will be set up as a high-ceilinged space with eight columns around a central baptismal font. The area around the font will be slightly lower, with three steps down, reminiscent of ancient baptisteries. There will also be an upper gallery where large circular and elliptical windows will bring in natural light. 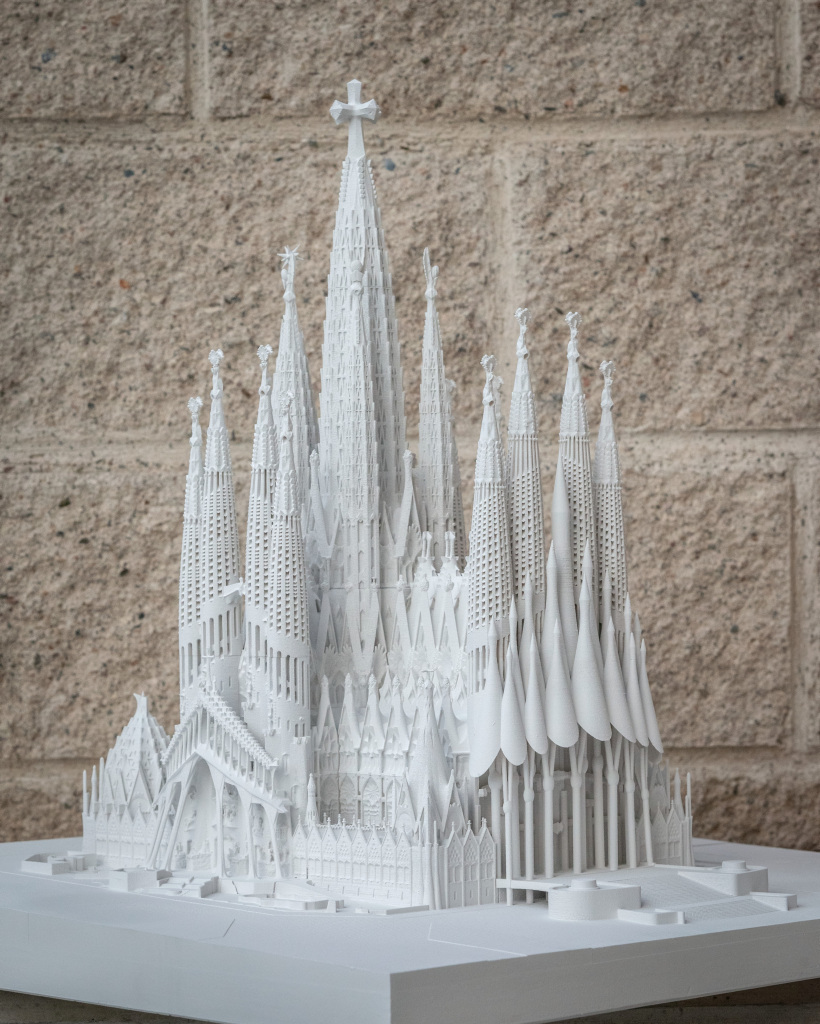