Since we launched this blog in November 2017, we’ve often referred to the Àlbums del Temple. These documents are extremely important for the architects in the Sagrada Família technical office, researchers and anyone interested in Gaudí’s work. But what are they exactly and why are they so significant?

The Asociación Espiritual de Devotos de San José, the developers behind the Temple project and works, periodically published a journal called El Propagador de la devoción a San José, which aimed to keep its 600,000 members up to date. These members participated in the association’s activities, such as masses and religious events to encourage devotion to Saint Joseph. The publication also featured the latest news on the Temple project and works. This journal has changed gradually over time but still exists, under the name Temple, preserving the original purpose of explaining and sharing the advances in the works and the activities held at the Basilica. It is available at public libraries throughout Catalonia. 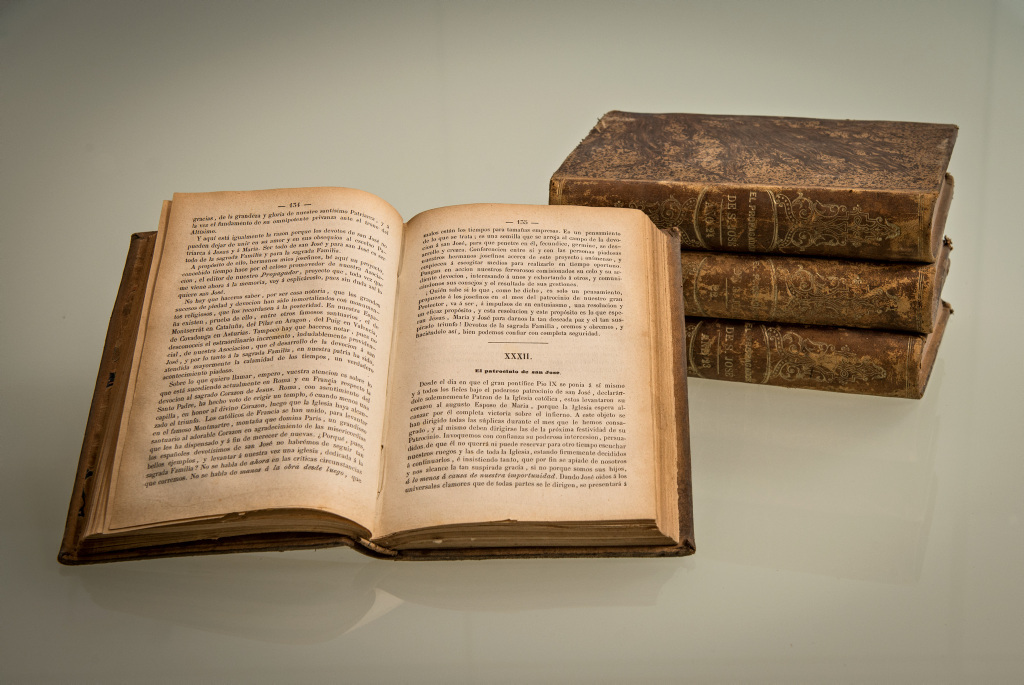 The news on the works published in El Propagador varied widely. They included everything from laying the first stone of a column to purchasing a specific material, the completion of a model or Gaudí coming up with a new version of some part of the project.

In addition to the news and information published in El Propagador about the project and the works, later the Àlbums del Temple were also published. Really, they were just another opportunity to share news on the construction of the Temple and, as a result, help raise funds to carry on with the works. In the first albums, the descriptions of the project were initially attributed to Gaudí’s assistant architect Domènec Sugranyes, and later, to the secretary of the Temple board, Joan Martí Matlleu. Although Gaudí didn’t write any articles for the journal, the fact that the first issues were published while he was still alive leads us to believe, undeniably, that he had to be aware of and authorise them, and this is the basis of their value.

The first of these albums was published in 1914, with the cover in three inks and texts in five languages: Catalan, Spanish, French, German and English. This clearly reflects the interest shown in the project at the time, beyond the local arena. It has 26 pages and the 16 centre pages are printed on higher-quality paper and feature photos of the state of the works at that time. This sort of central fascicle also has a sketched floor plan of the completed Temple. This drawing had been published previously and shows pinnacles on the towers that had evolved from the original proposals. 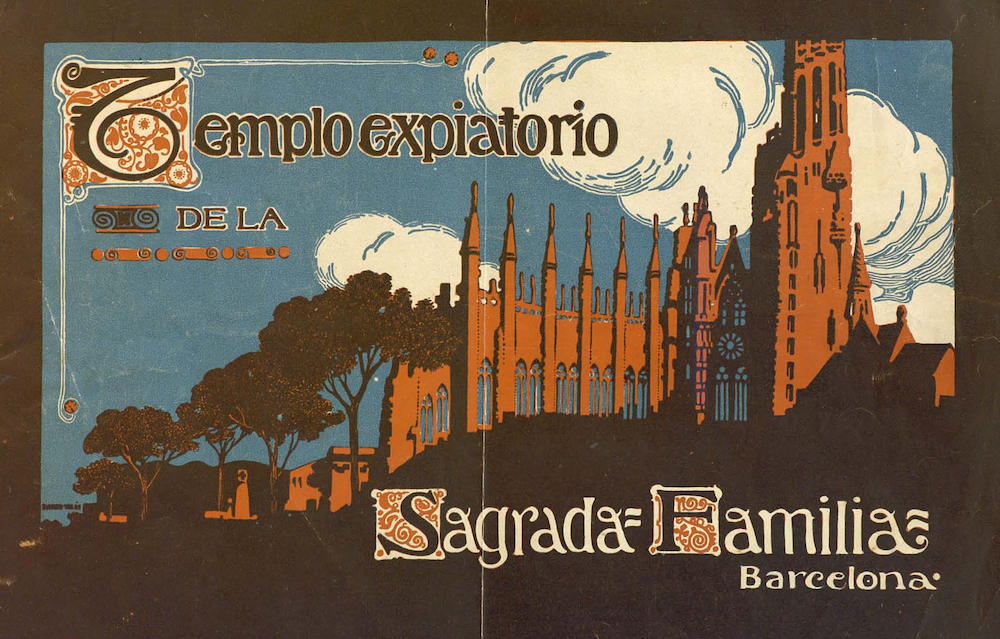 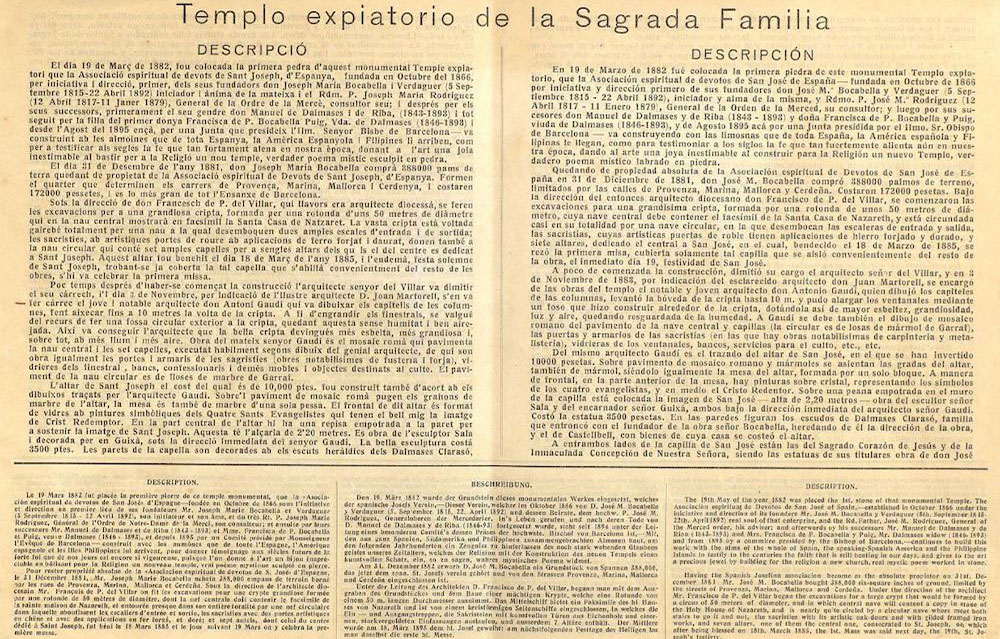 In 1917, the second Temple album was published, this time with 36 pages. The album had the same cover and the texts are nearly identical to those in the first album. It also has the central photo dossier, but with two additional pages featuring very interesting new information, including floor plans for the Sagrada Família project, photos of the models showing how the project had evolved and various studies comparing the church Gaudí was designing to others from all over. In this regard, the system used is highly visual: half the floor plan of the Sagrada Família next to half of one from another temple. The same was done with elevation drawings. This way, our Temple was compared to those in major Catalan cities, such as Girona, Manresa and the two most important in Barcelona, the Cathedral and Santa Maria del Mar, as well as many Spanish cathedrals and examples of European Gothic architecture, including the main churches in Rome, Saint Mark’s in Venice, and the cathedral in Cologne (Germany), which is shown in an elevation comparison. 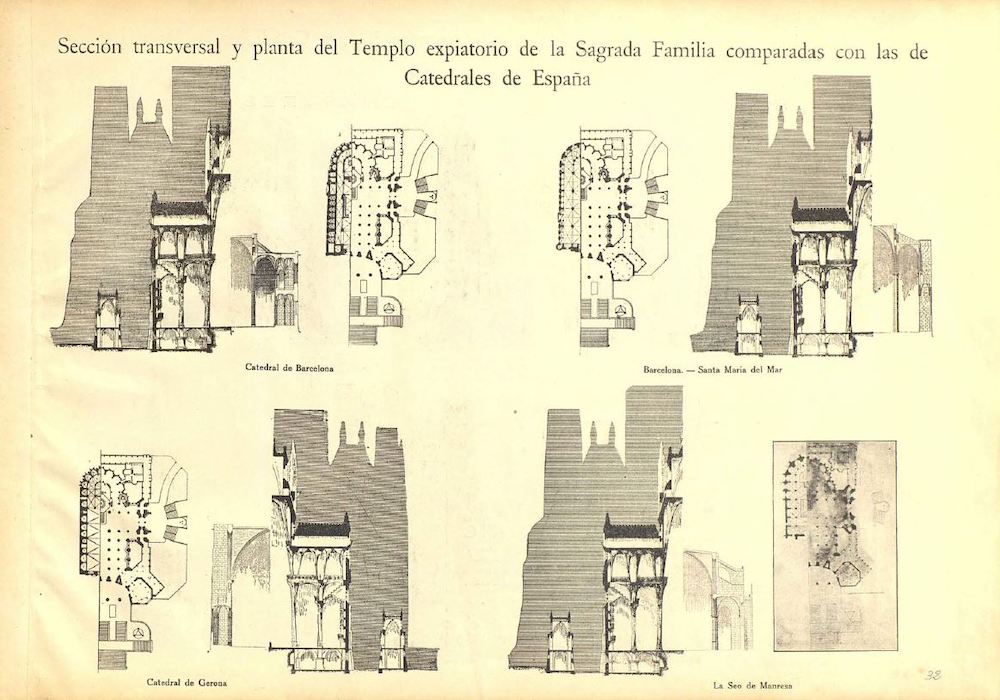 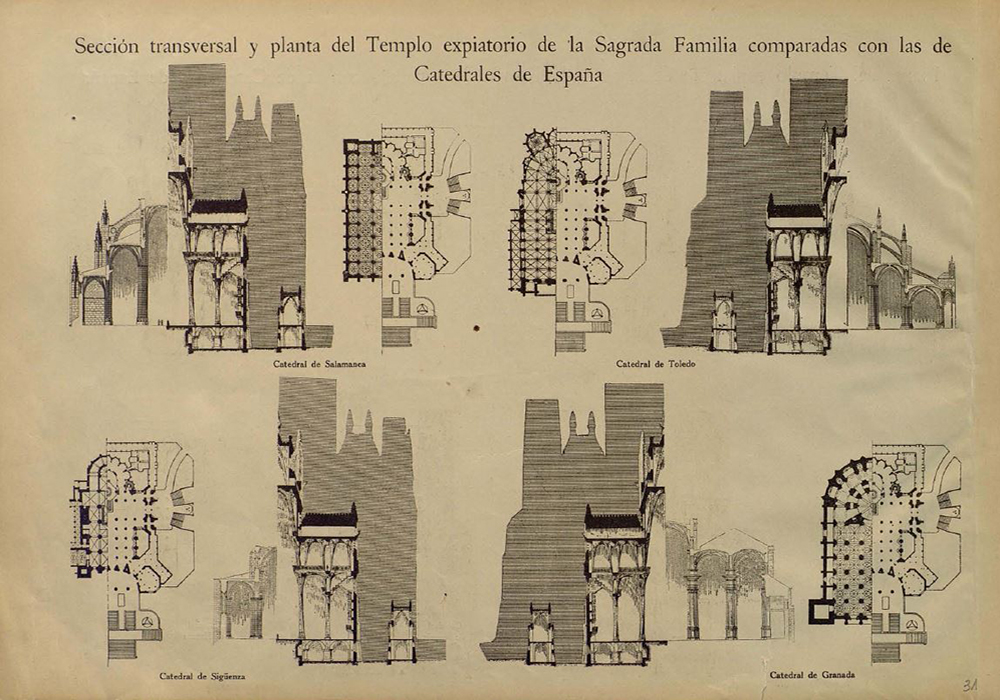 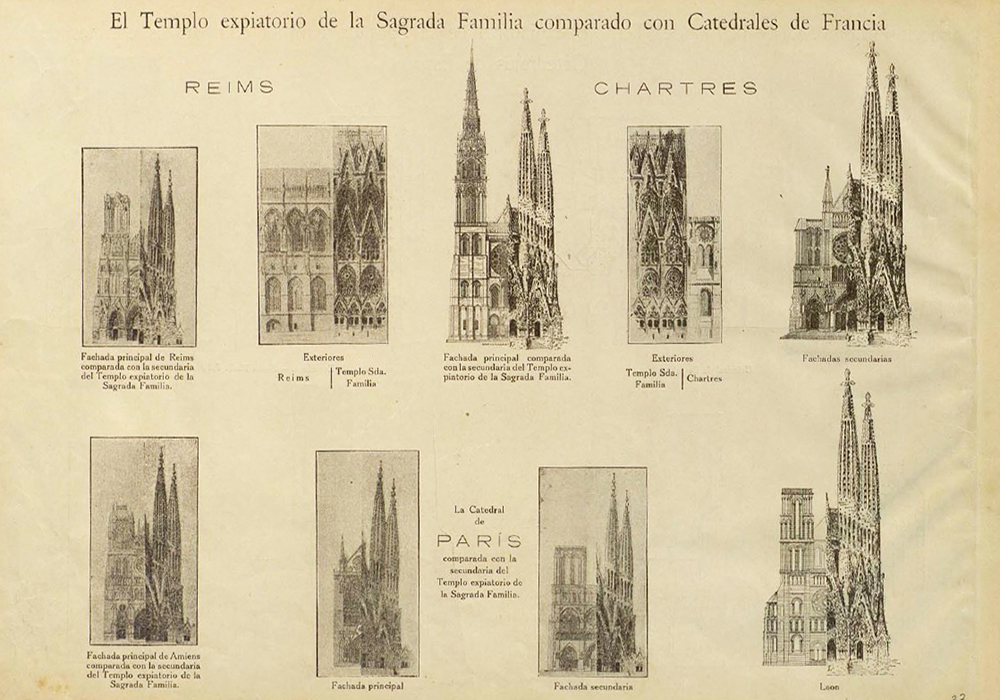 It is difficult to date the third album precisely, but it was published sometime between 1922 and 1925, meaning Gaudí was still alive. With different contents and cover, this issue has 32 pages in total. Now there are only three languages (Catalan, Spanish and French), which means there is more space to describe the project. So, this issue features sixteen pages explaining it, along with a central photo dossier, also sixteen pages, with some new photos and some repeats. From the study in the second album, only the floor plan of the project remains, plus a new longitudinal cross-section of the Temple and a comparative study with the churches in Rome and Cologne. 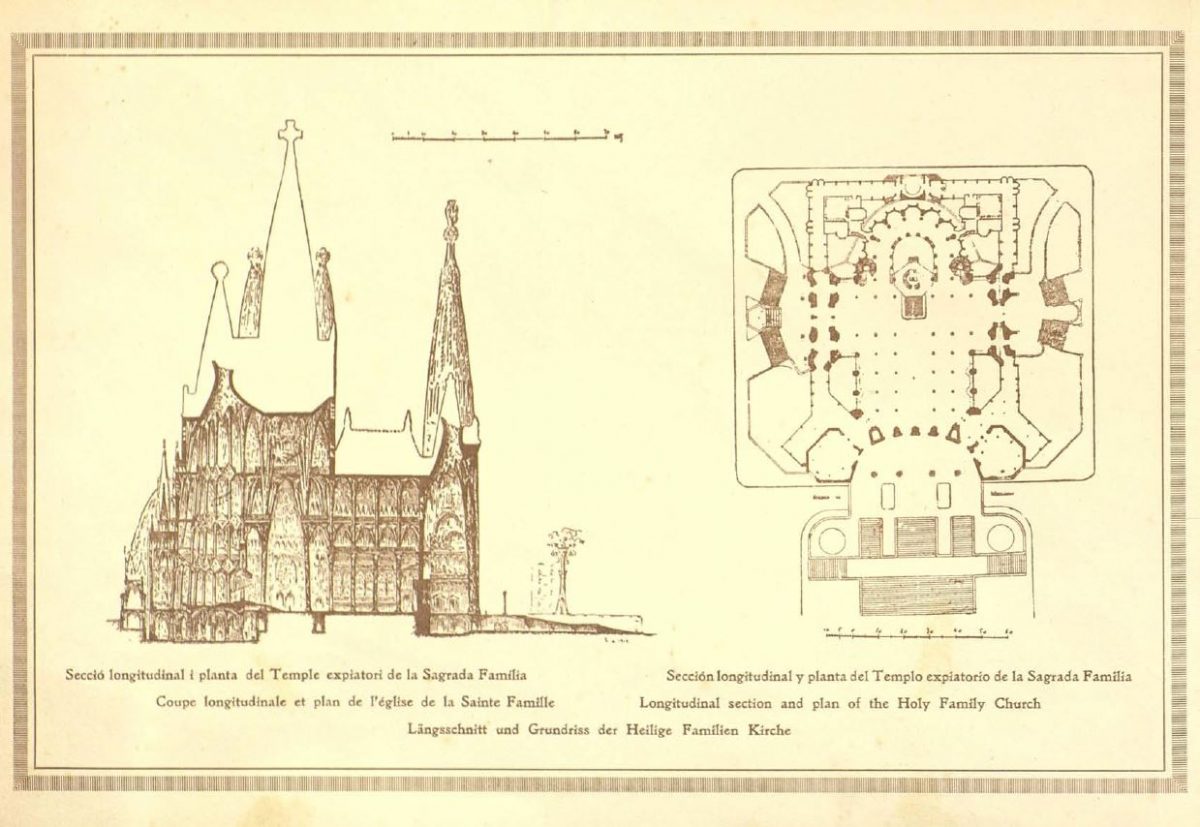 The fourth album, published between 1927 and 1929, has 52 pages and is the most complete of all. The cover is similar to the third issue and it also has text in three languages. This issue features a general drawing of the updated project and a sixteen-page central photo dossier, some new and some repeats. Along with the texts, there is a wide variety of illustrations. Some of these go with the comparative study of the cathedrals, plus new floor plans and elevation drawings of the Temple, and even a full-page description of the Nativity façade, which was nearly complete at that point. As it was published after Gaudí’s death, this album is also a way to speak about his work and his contribution to architecture. 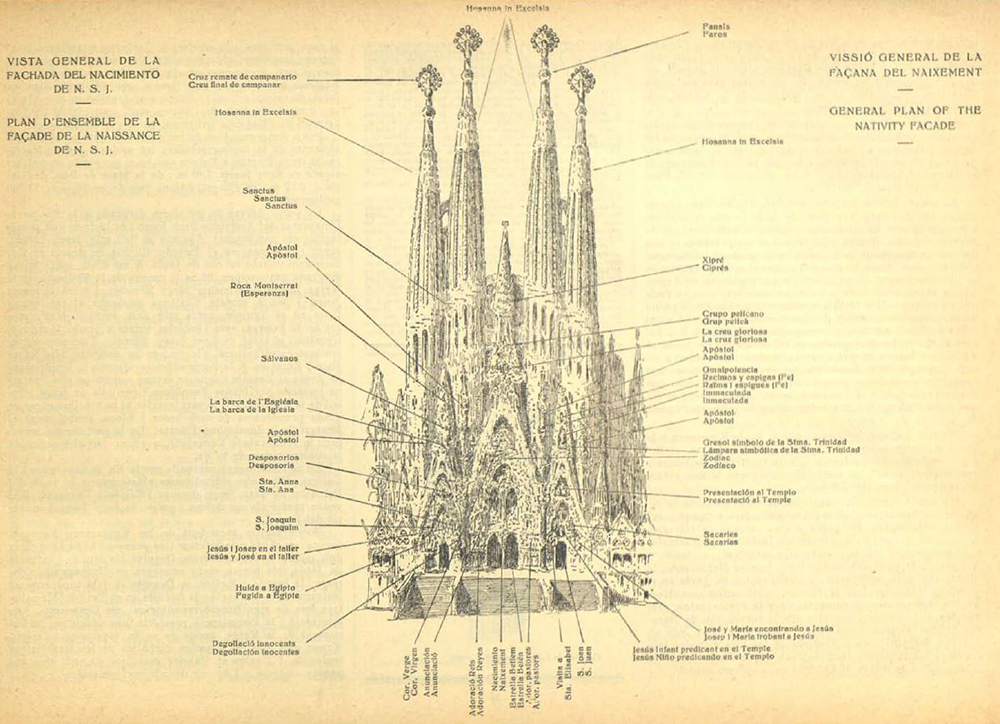 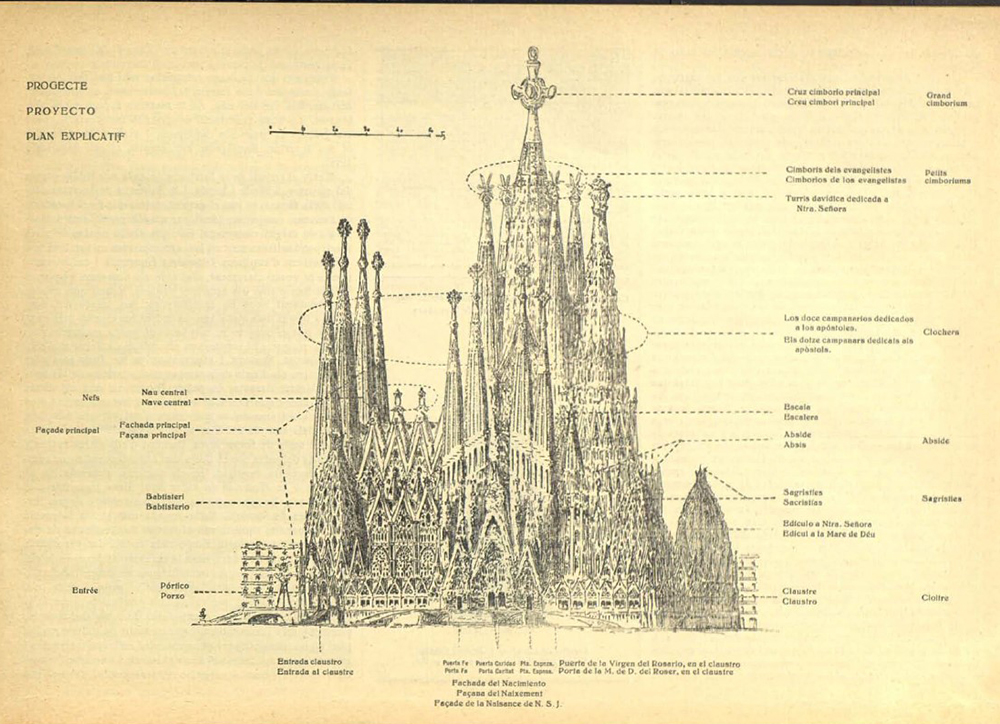 This fourth album was the basis of a book on the Temple published in 1929 by architect Isidre Puig Boada, disciple of Gaudí and site manager from 1966 to 1974, the last three years with Lluís Bonet. This publication completes the descriptions and symbolism from the previous album in great detail.

As they were published just three years after Gaudí’s death, these two publications (the fourth album and the book by Puig Boada) are considered to be the truest to the architect’s final intentions regarding the evolution of the project. So, these are one of the written sources most commonly consulted and taken into account by the anonymous architects who continue on with the works with the utmost respect for the original project to highlight its true master and creator: Antoni Gaudí i Cornet.