Antoni Gaudí conceived his works as projects that were always evolving: the original idea could undergo changes until the very last moment, even once the works had begun. This is why he made large (1:10 and 1:25 scale) models from the plans he drew; he believed that seeing them in three dimensions would help him resolve any structural challenges that arose. The models for the Sagrada Família were destroyed, in part, with the plans and drawings in 1936, ten years after Gaudí’s death. The ones that were salvaged have been restored and used to continue on with the works according to Gaudí’s plans.

Technology, however, has advanced in leaps and bounds over the 135 years since the cornerstone of the Basilica was laid. The team of architects that has and is working on the Temple construction has used these advances to improve the design and construction process and make Gaudí’s dream come true. So, from 2001, inspired by work methods used in the automotive and aeronautics industries, 3-D design software and 3-D printers have been used to make plaster models more precisely and quickly. Being able to see a 3-D likeness of what will be built has allowed them to make decisions and redesign each space as the work progressed. 3-D printing allows them to continue using models to validate the project, as Gaudí did, but making the process much quicker and easier for each model. However, this three-dimensional modelling software wasn’t enough, as it didn’t show them how light affected the different spaces or how the colours from the windows reflected on the walls.

The renders (static images that simulate reality by recreating a 3-D model) introduced recently allow for much more realistic likenesses. However this technique is elaborate, expensive and slow, as it takes days for the models to be ready.

It wasn’t until late 2016 that cutting-edge technology appeared that has given the architects of the Basilica a new tool for designing and making decisions: virtual reality glasses, which allow them to go into three-dimensional simulations. 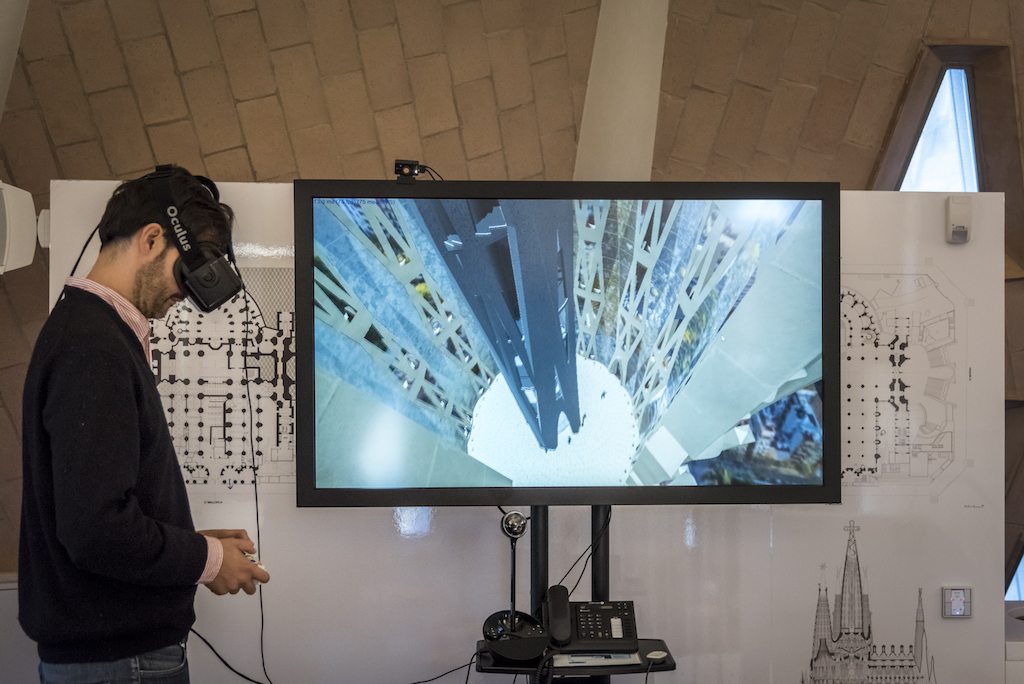 Inspired and guided once again by the automotive and aeronautical sectors on an industrial scale, the technical team at the Sagrada Família has chosen to make virtual reality part of the project-design process in order to facilitate decision-making. In architecture, normally, this technique was only used in the promotion phase to sell high-end housing, giving potential customers a first-hand experience of the product. However, at the Sagrada Família, this is the first time it has been implemented to design such a unique, large-scale building. Using 3-D glasses in the creative process instead of as a tool for selling a final, finished product, is also a great novelty.

But, how do 3-D glasses work? The team of architects, with help from the 3-D software, draws virtual models that the computer program later turns into a 3-D environment. The virtual reality glasses allow them to go into the project as if it were real, so they can assess the design from outside and inside of the Temple. This means that spaces that could previously only be imagined from drawings and models can now be experienced from the inside. Now, each change the architects want to make to the project can be checked within just a question of minutes.

The platform that is helping keep Gaudí’s idea of the 3-D experience alive is even set up to simulate changes in sunlight due to the seasons: a command lets you make changes instantly to a series of materials, colours, textures and light, as long as they are selected from a pre-configured database. The stained-glass windows and the walls, for example, can be seen in bright or weaker light, depending on the time of day or day of the year chosen. In short, working with materials and textures allows them to see the effects of the sunlight on the space inside.

Right now, virtual reality is being used for work on the tower of Jesus Christ, which at 172.5 metres will be the tallest of the six central towers that will be rising into the skies above Barcelona over the coming years. The idea, however, is that by collaborating with the Polytechnic University of Catalonia (UPC), all the projects pending can be handled together using the same system for the other towers remaining to be built, a milestone we are scheduled to reach by 2022.

ADVANCES THANKS TO THE 3-D GLASSES

To give some specific examples, so far virtual reality has helped make decisions regarding the design on finishes inside the towers, such as railings, flooring, windows and materials used inside the central tower. By using the 3-D glasses, the team has been able to experience and compare the different options on the table, making it easier to choose the ones that most improve visitors’ experience.

The first time the 3-D glasses were used at the Temple it was to see inside the tower of Jesus Christ. On that occasion, they allowed architects to see what this 60-metre tall space would really be like, taking into account the effects of perspective as seen by human eyes, not a drawing program. This technology, therefore, allows us to grasp what the space will really look like, which move away from a pointier view and towards one that is more dome-like, with a good sense of space.

Virtual reality, therefore, has been a great addition to designing the concept of the project for the Basilica of the Sagrada Família, as the temple’s measurements are so exceptional that otherwise it would be very difficult to visualise and experience the changes, make proposals about finished spaces and choose the best option. 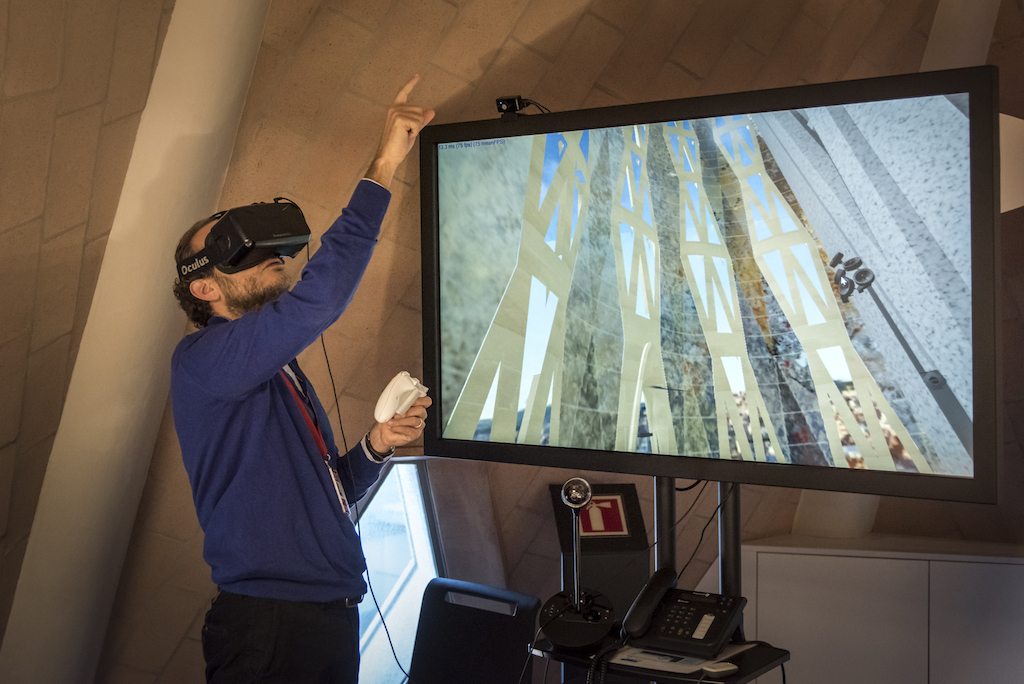 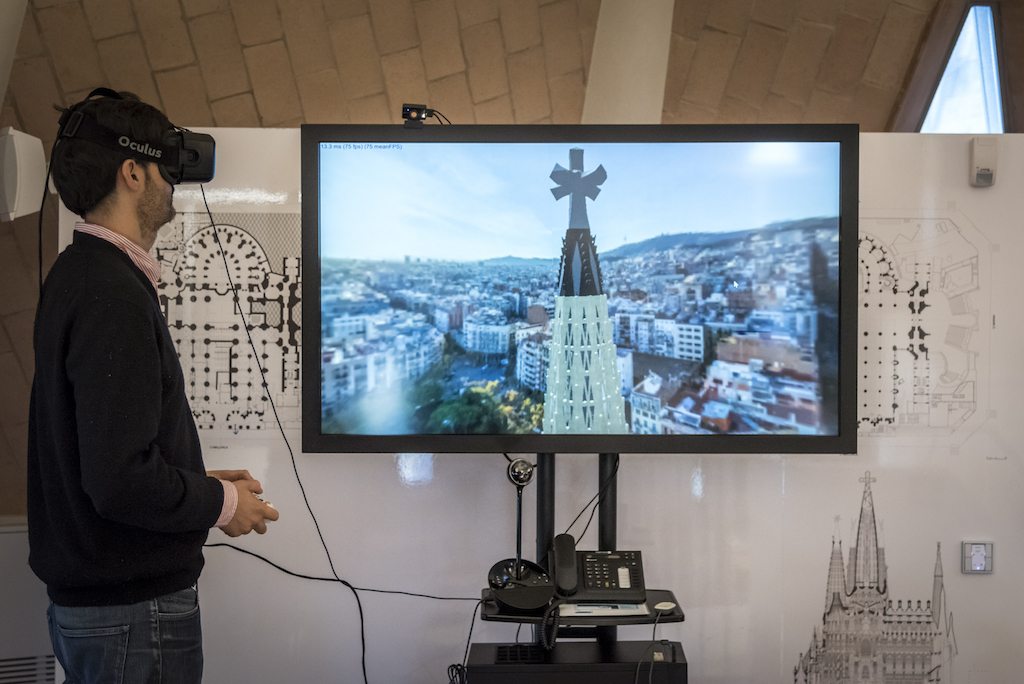