With the new year, activity has returned to the Sagrada Família in a big way. The past twelve months were intense, reaching several milestones, as we explained in a previous post. Possibly the most symbolic was that the central towers, under construction since 2016, surpassed the bell towers on the Nativity façade in height. These bell towers had made up the iconic profile of the Sagrada Família for the past hundred years, although Gaudí only saw one Temple tower completed: the tower of Barnabas, on the downhill end of this façade, which was finished in 1925. This new year, the central towers will also surpass the towers on the Passion façade, giving the Basilica a whole new shape. This historic change will be accompanied by other advances, in construction as well as the development of various projects that will bring us closer to works that will take place at the Temple over the coming years. Find out about everything that will happen at the Sagrada Família in 2020!

Although the pace of works on the central towers will be slightly slower in 2020 than previous years, they will continue to be the main focus of the Temple’s evolution. So, the tower of Jesus Christ, which will be 172.50 metres tall when finished, is expected to go from the fifth level, where it was at the end of 2019, to the ninth this year. This will take the central lantern from 111.78 metres tall to 130.67 metres. The tower of the Virgin Mary, which will be the Temple’s second tallest at 138 metres tall, will get one more level this year, going from the eighteenth to the nineteenth. This will take it from 110.65 metres at the beginning of 2020 to 112.48 metres by the end of the year. The importance of these new panels goes beyond the increase in height, however, as they are part of the pinnacle that will crown the tower. For their part, the towers of the Evangelists, which stood 106.14 and 108.18 metres tall at the end of 2019, depending on whether they were on the tenth or eleventh level, will grow to 110.54 of the 135 metres they will have when finished, taking them to the twelfth of a total of thirteen levels. So, the towers of the Evangelists will rise to the final level of panels this year. Like with the tower of Mary, the thirteenth level is special as it is part of the pinnacle. 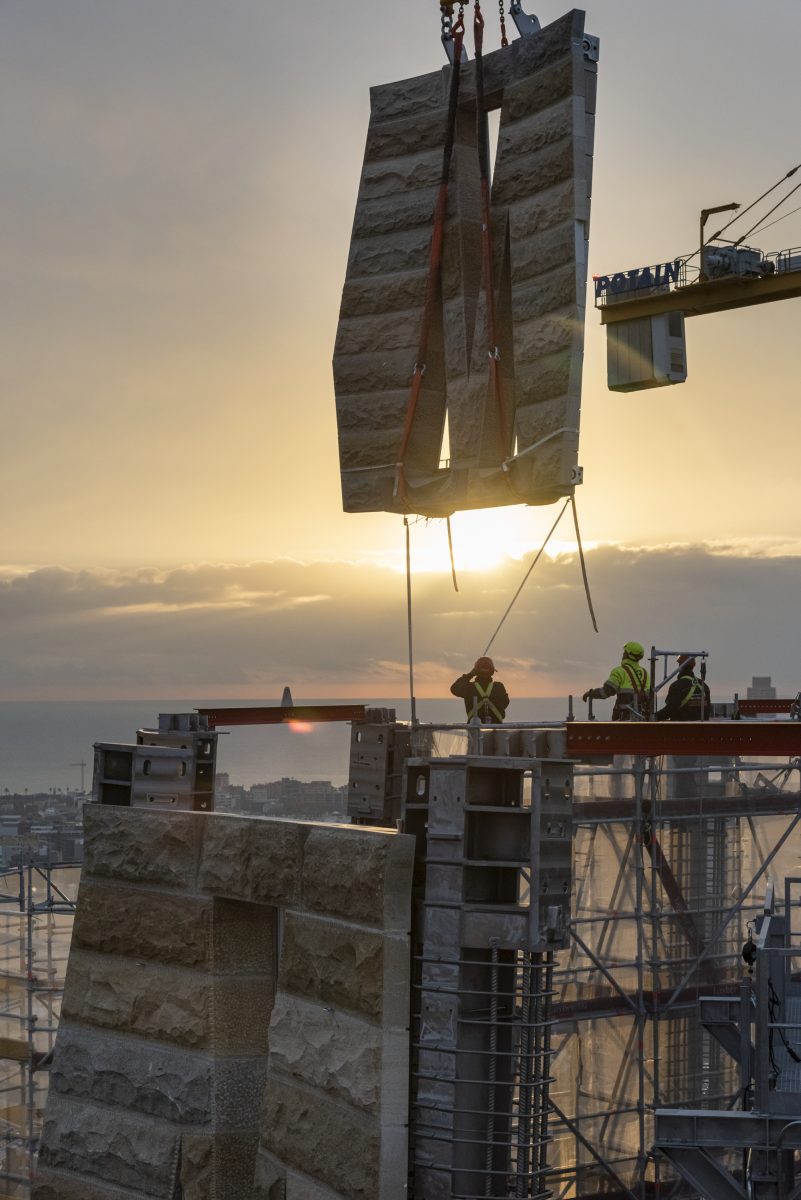 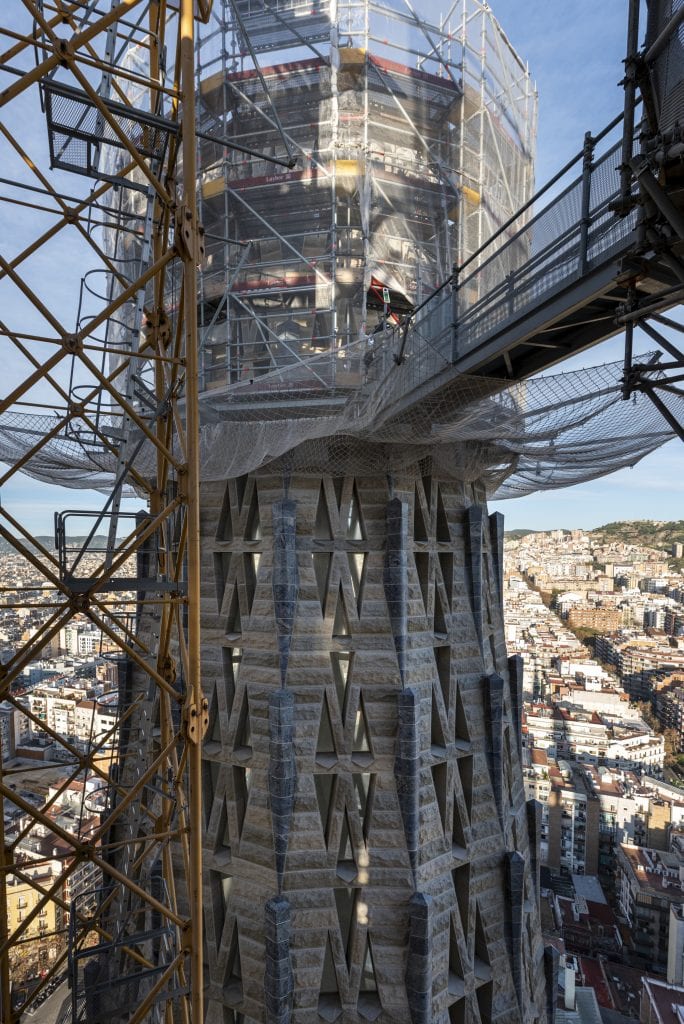 2- THE PINNACLES: ASSEMBLY AND APPROVAL OF THE EXECUTIVE PROJECT

The schedule of works establishes 2022 as the year the central towers of the Sagrada Família will be finished. And that includes the pinnacles that will top them. The first of these to go in, according to current planning, will be on the towers of the Evangelists. They will include the tetramorph or winged figures that Christian iconography has traditionally used to represent the Evangelists. This will be in 2021. So, this year, in Galera, the external work site in the town of Gaià (Bages), work will be ongoing to assemble the structure made up of four icosahedrons for these pinnacles. Construction of these elements began in late 2019. The works on the pinnacle for the tower of the Virgin Mary, which will have a star on top, will also begin in 2020, as the nineteenth level of panels, which are expected to be put on the tower in the coming months, are part of this pinnacle. In Galera, work on the tower of the Virgin Mary now focuses exclusively on this final section. So, in addition to this level of panels, work is also under way to pre-assemble the first metres of the crown of twelve stars and other elements of the pinnacle. Finally, the pinnacle for the tower of Jesus Christ, a four-armed cross, will progress into the final phase before construction can begin: the executive project. This is expected to be finalised sometime in 2020, specifying the materials and building techniques that will be used to create the highest point of the central tower, which will also be the highest point of the whole Temple and make the Sagrada Família the tallest building in Barcelona. 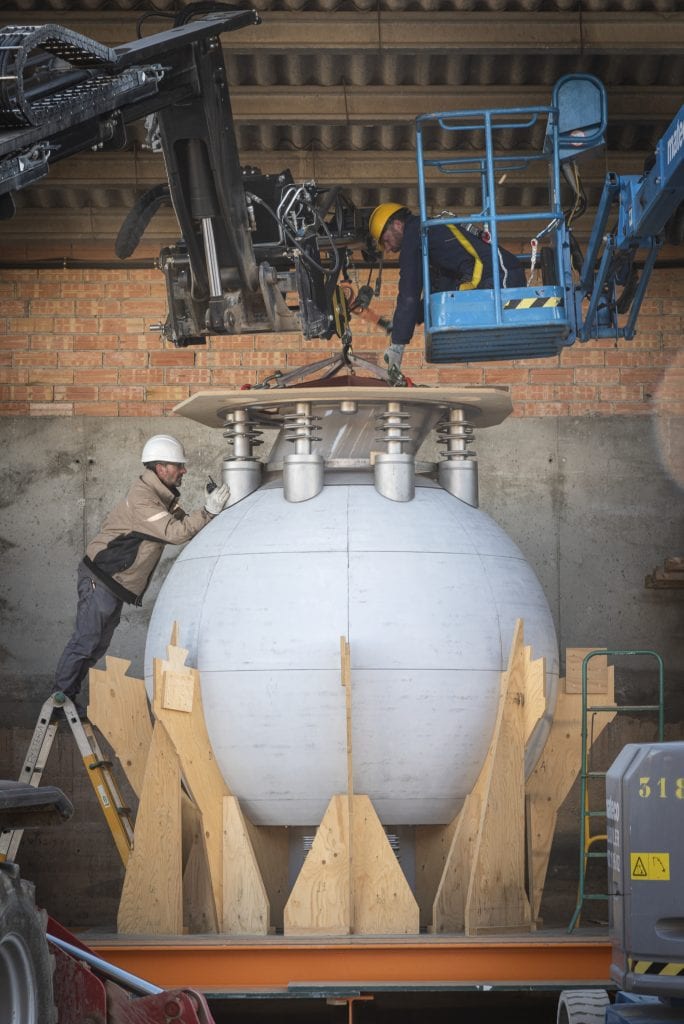 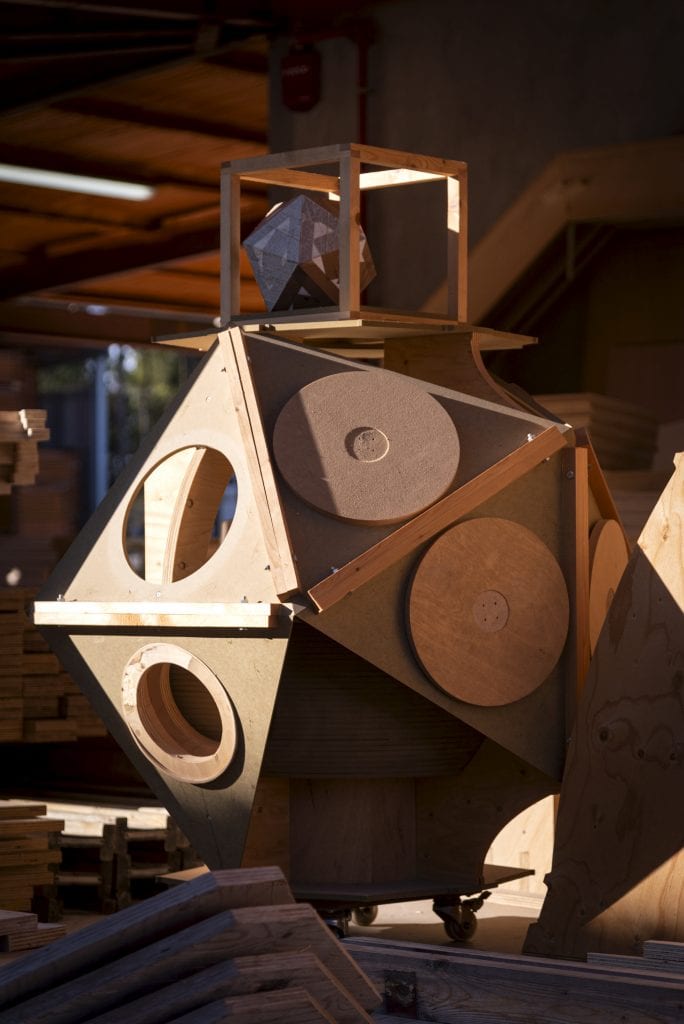 3- THE ROOFS: WORK WILL ALSO BE DONE ON THOSE AT 54 METRES

Late last year, work began to build the roofs of the side naves, located 30 metres off the ground, above the choirs and the vaults on this level. But these works will truly take off in 2020. So, over these months, construction will also focus on this part of the Temple. Of the 40 columns these roofs will have, this year a total of 32 will go in: 16 on the Nativity façade and 16 on the Passion façade. Plus, this year works will begin on the roof of the main nave, located at 54 metres. In this case, works are expected to focus on the arches and laying the brickwork, in two sections, as the roofs will be held up by flat-brick vaults. Meanwhile, in Galera, work will be under way to create the reinforcements for the vaults on the floor of the roofs at this level. 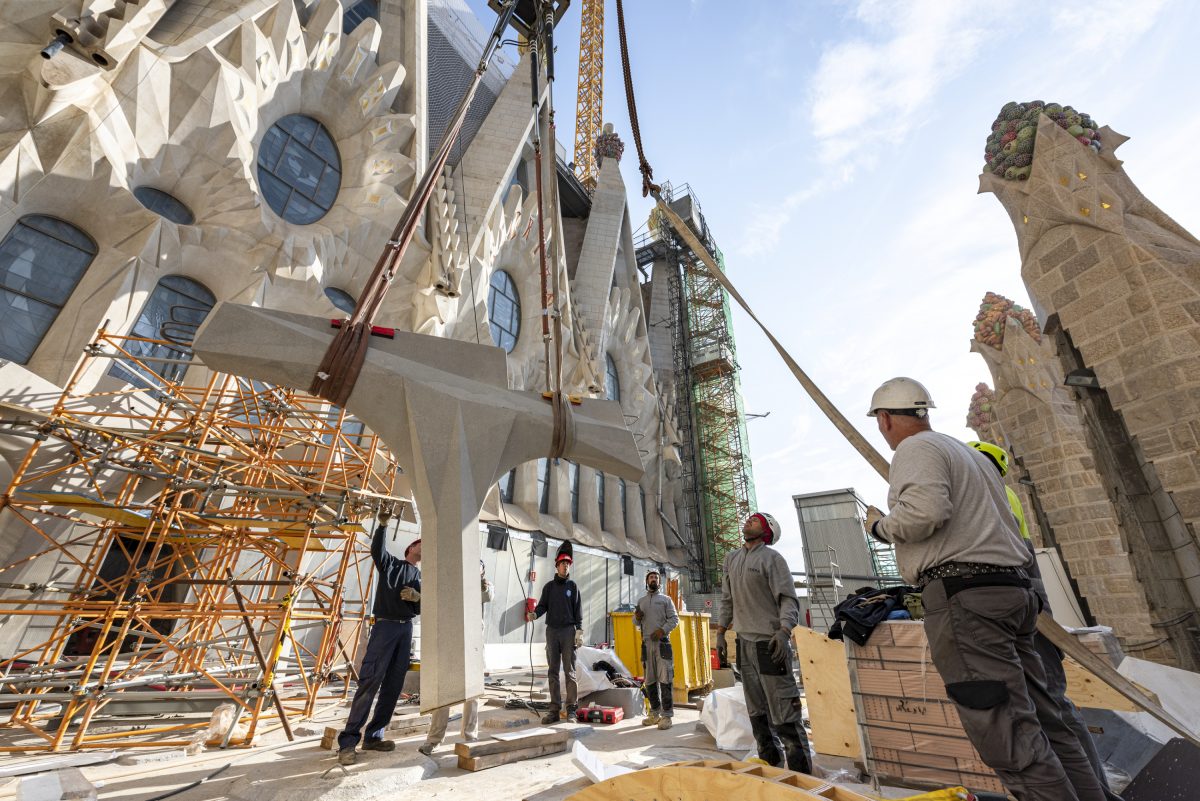 The architectural work on the Temple is expected to be complete by 2026. This means that, by then, the Sagrada Família will have all the elements in Gaudí’s plans, some of which are still missing. These include the sacristy on the Nativity façade, on the uphill corner of this façade, and the Chapel of the Assumption, which will be in the middle of the apse façade, on Carrer de Provença. Construction of the latter was part of the documents recently submitted to the Barcelona City Council, which allowed the administration to grant the Temple’s building permit. These two elements will be joined by a section of cloister, yet to be built, as Gaudí planned for the Sagrada Família to have a cloister that was both inside and outside, making up the perimeter of the Temple instead of surrounding a central courtyard as is most common. In 2020, the Sagrada Família Technical Office will be working on the preliminary project for these three elements. 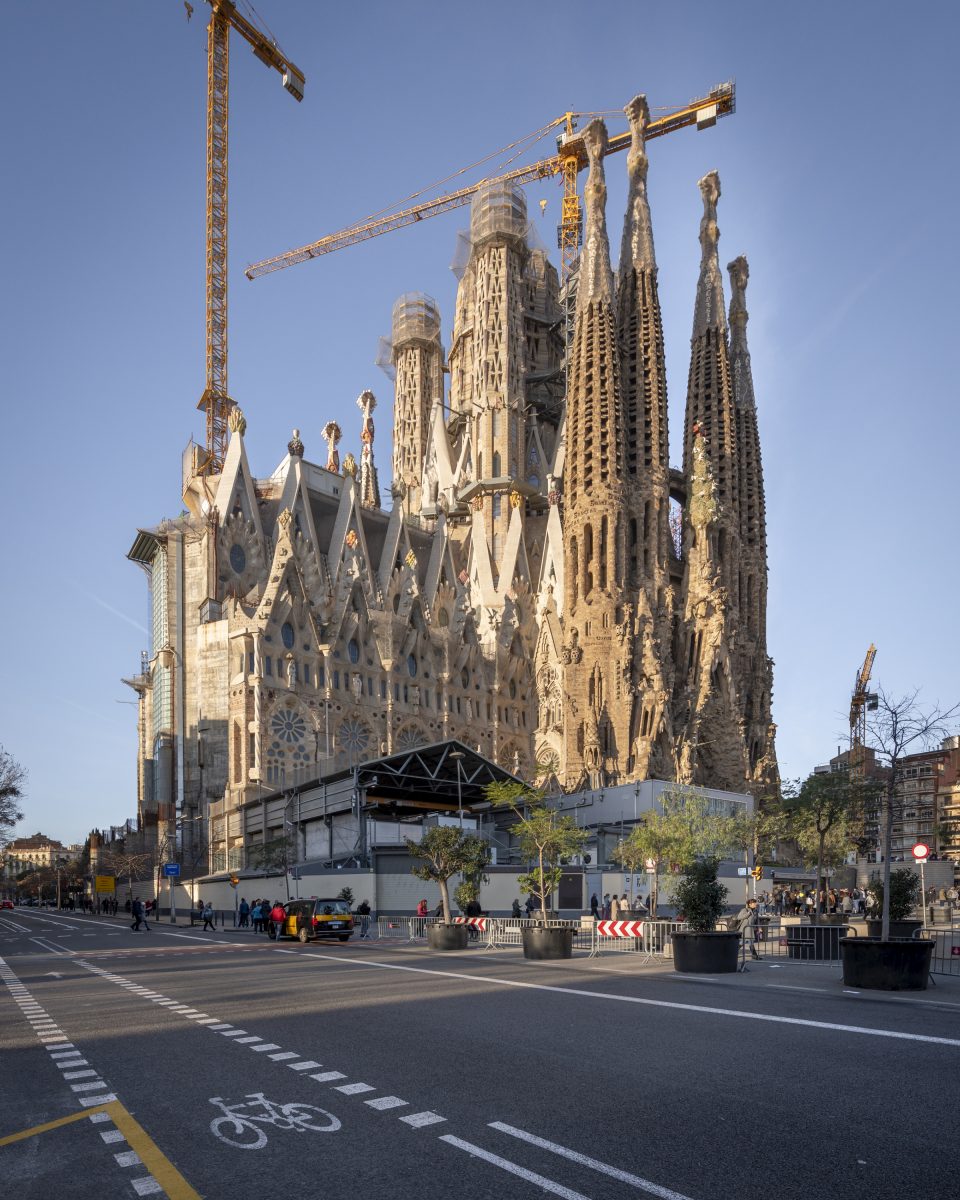 5- PRELIMINARY PROJECT TO BE SUBMITTED FOR THE GLORY FAÇADE

Work began on a new front at the Sagrada Família in 2019: the Baptistery basement, which will be on the side of the Glory façade closest to Carrer de Sardenya. Some of the uses for this space have already been established and the rest will be determined in a project that is currently under way, which will also lay out the use of other non-religious spaces. The importance of these works lies in the fact that it is the first of the construction tasks on the Glory façade. It will include, on the one hand, the Baptistery and, on the other, the Chapel of Penitence and the Sacrament, at the corner of the Glory and Nativity façades. In fact, the preliminary project for the Glory façade is expected to be finished by the end of the first quarter of 2020. This project will lay out the basic shape of the vaults, columns, narthex and chapels. Afterwards, work will begin on the executive project for the architectural structure that can be built according to the provisions of the Special Integrated Urban-Development Plan (PEUI) submitted to the Barcelona City Council to get the building permit. 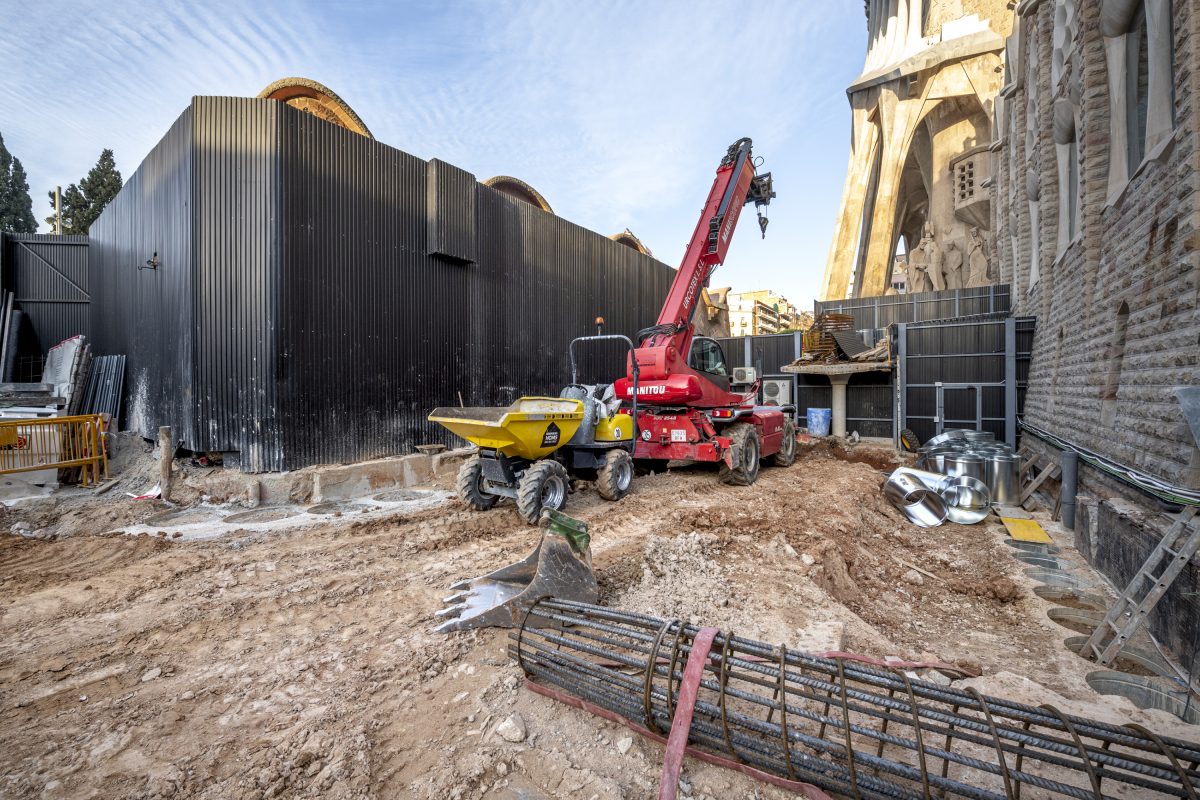